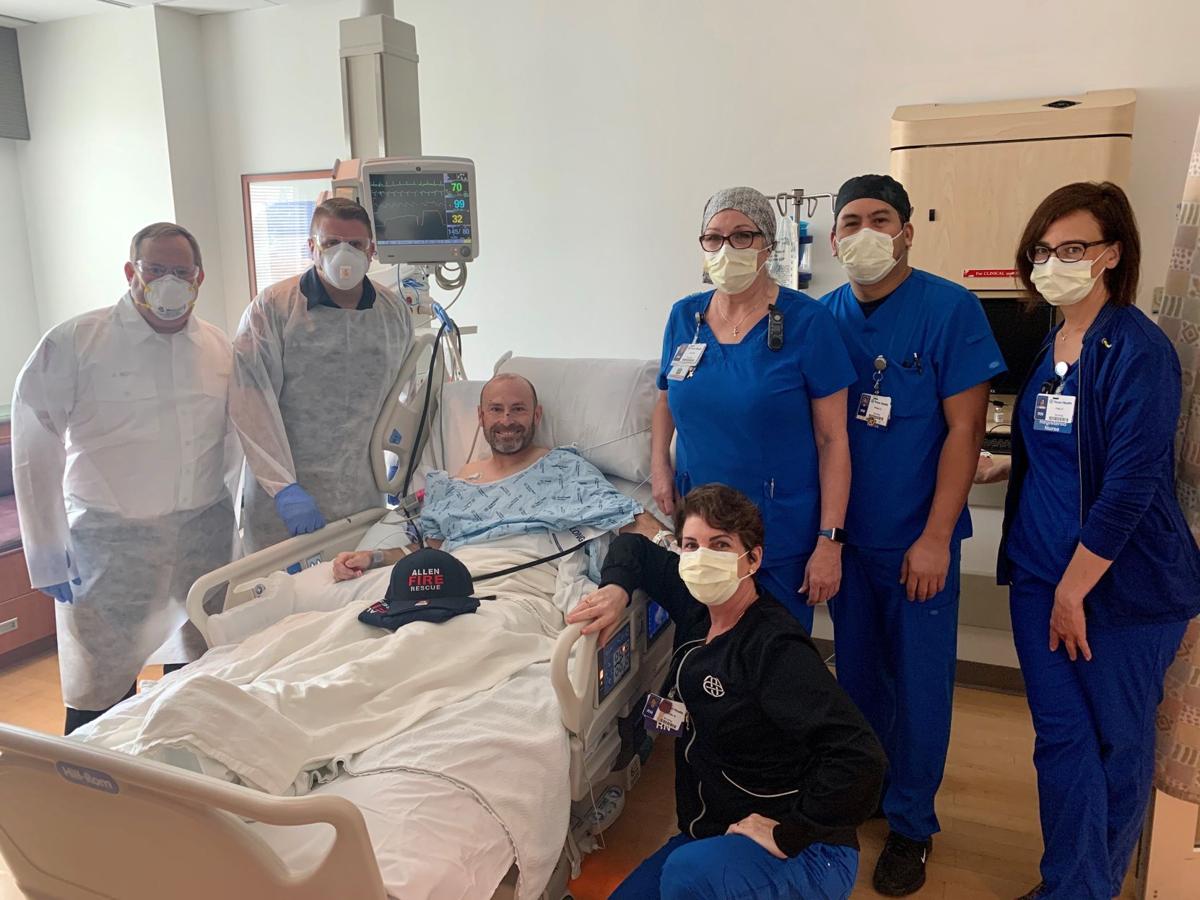 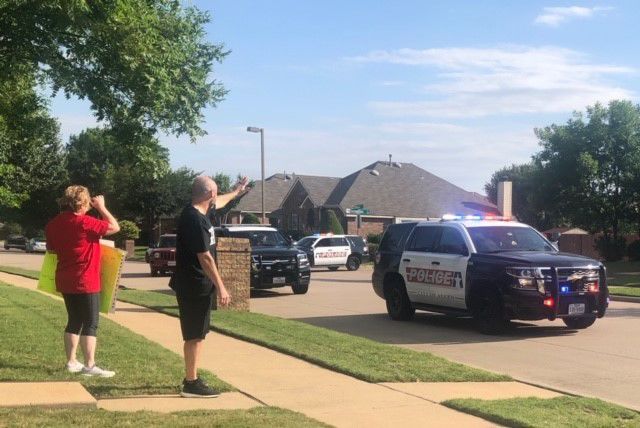 Days after his return home, a parade of well-wishers celebrated David Hines' recovery. 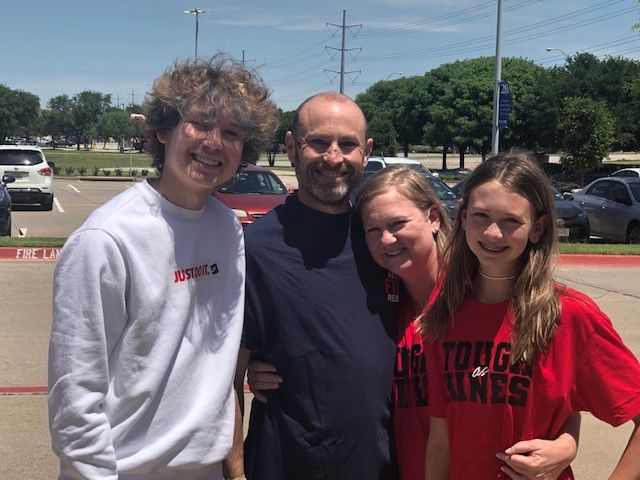 Davide Hines is back at home with his family after he received two stents to repair blockages in his heart that caused him to collapse on April 29. 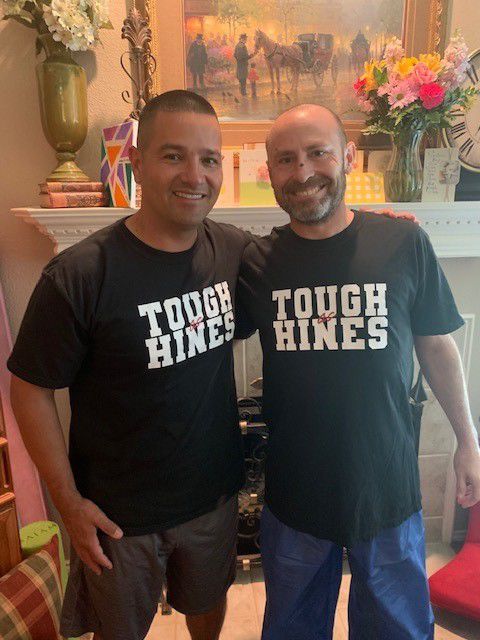 Allen Police Officer Anthony Garcia and David Hines sport "Tough as Hines" T-shirts. Garcia took over CPR from a bystander on Hines after the frequent runner had a heart attack during his run.

When Carrie Hines heard the banging on her door on the morning of April 29, she assumed her husband, David, was back from his morning run and playing a joke on her.

But the Allen man had never even made it to his destination of Celebration Park.

Passing motorists would notice David, 46, face down on a sidewalk off Malone Road. Someone called 911. Zepp Moore, a nearby resident, ran over and checked for a pulse but found none. A woman then started chest compressions while Moore kept time.

Allen Police Officer Anthony Garcia, the first emergency responder to arrive on the scene and a friend of the Hines family, couldn't see the face of the man as he approached but recognized the royal blue T-shirt that he wore.

"I don't know if that's David's favorite color, but he wears a lot of royal blue shirts, and I know he runs almost every day around that time. That's how I knew it was him," Garcia said.

The officer took over chest compressions from the woman and then, after Allen firefighters/paramedics arrived on the scene, rushed to the Hines' home to alert Carrie.

"I opened the door and Anthony Garcia was there and he said, 'Get in the car!'" Carrie recalled. "I thought he was teasing. I said, 'I'm in my pajamas' but he said, 'Something happened to David. Get in the car.'"

At the scene, Carrie saw her husband on the ground and emergency crews continuing CPR on him. She remembers a woman standing off to the side with her hands raised in prayer.

"Someone came over and said, 'We're not getting a heartbeat, but we're doing everything we can,'" Carrie recalled. "I was just terrified."

But thanks to the efforts of those Good Samaritans, first responders and caregivers at Texas Health Presbyterian Hospital Allen, David made a remarkable recovery. Less than a week after having the heart attack, David is now back at home with his wife and two children.

"He was clinically dead. He had no heartbeat. They saved his life out there on that jogging path that day," said Danny Williams, a Division Chief for the Allen Fire Department. "From the person who called 911 to those who did compressions to our personnel who show up and take over from where others left off to those in the emergency room who we hand the patient off to – it's just a team effort that brought him back to where he is now. It's pretty incredible."

David's heartbeat would return after being shocked with a defibrillator in the ambulance ride to the hospital.

Carrie, who was driven to the hospital in Garcia's patrol car, had to initially wait outside due to visitor restrictions. She was expecting the worst when she was later allowed inside along with her father.

Because it was unknown how long David had been down, Lee recommended therapeutic hypothermia – the process of cooling, then warming back up David's body to try to prevent further damage from swelling of the brain.

"Any significant amount of time the brain goes without oxygen, there is an increased risk that you can suffer irreversible brain damage," Lee said. "That's something we always worry about when someone goes down and loses a pulse and we don't know how long they'd been gone for."

David was cooled down to about 92 degrees for about 24 hours before the warming process was started on the afternoon of April 30. He had returned to his normal body temperature by 11 p.m. that night, beginning the excruciating wait for his family to see if he would wake up.

"That's your time of hope, when you can see how much brain damage there is and whether or not they actually wake up from their coma," Dr. Lee said.

As she anxiously waited, Carrie relied on updates from David's nurses, whom she said, "Made me feel like I could call them anytime." She also had friends who worked at the hospital, like dietician Sarah Mitchell and registered nurse Julie Benesh, who would check in on David, hold his hand and tell him that Carrie loved him.

'Orchestrated by the Lord'

But concerns remained that morning that David was still somewhat non-responsive. Carrie, convinced hearing her voice might help, headed to the hospital determined to see him.

"My dad missed the exit and I was so mad," Carrie said. "I said, 'I'm going to cry for one minute, then I'm going to be strong again.' But while he was turning around, my friend Julie texted me and she said, 'He's awake! Vent is out! He's talking!"

At the hospital, Carrie got to visit with her husband and was soon joined by Garcia.

"He said, 'What happened?'," Carrie recalled. "He knew my name. He knew Anthony's name. It was just a miracle."

"I can't explain it. It was weird thinking back to whenever I got there on the scene and I was like, I don't know if he's going to make it, to seeing him smiling really big at me," Garcia said.

Lee was also pleasantly surprised when he walked into David's room to see him responding and alert.

"That was just amazing," Dr. Lee said "Especially since we don't how long he was out for, I was actually very surprised that he had made such a tremendous recovery. The fact that he had a bystander start CPR before anyone showed up, that saved his life."

That Monday, Lee placed two stents to repair the blockages – one 70% and the other 99% – in David's left anterior descending artery, often referred to as the widow-maker.

An active man who plays sports and had experienced no previous problems, David believes his heart issue was hereditary.

"I've never felt short of breath, never had chest pain. It came out of nowhere," David said. Other than some soreness and a little short-term memory loss, he said he now feels fine.

Days after his return home, a parade of some 100 well-wishers, led by Anthony in his patrol car, drove by the Hines home to celebrate his recovery. The couple says they're grateful for everyone who played a part in saving David's life – from the first responders and caregivers who treated him to the Good Samaritans who stopped to help that April morning, including the woman who performed chest compressions but has shied away from any attention.

"Every single minute was orchestrated by the Lord and it worked out," Carrie said.