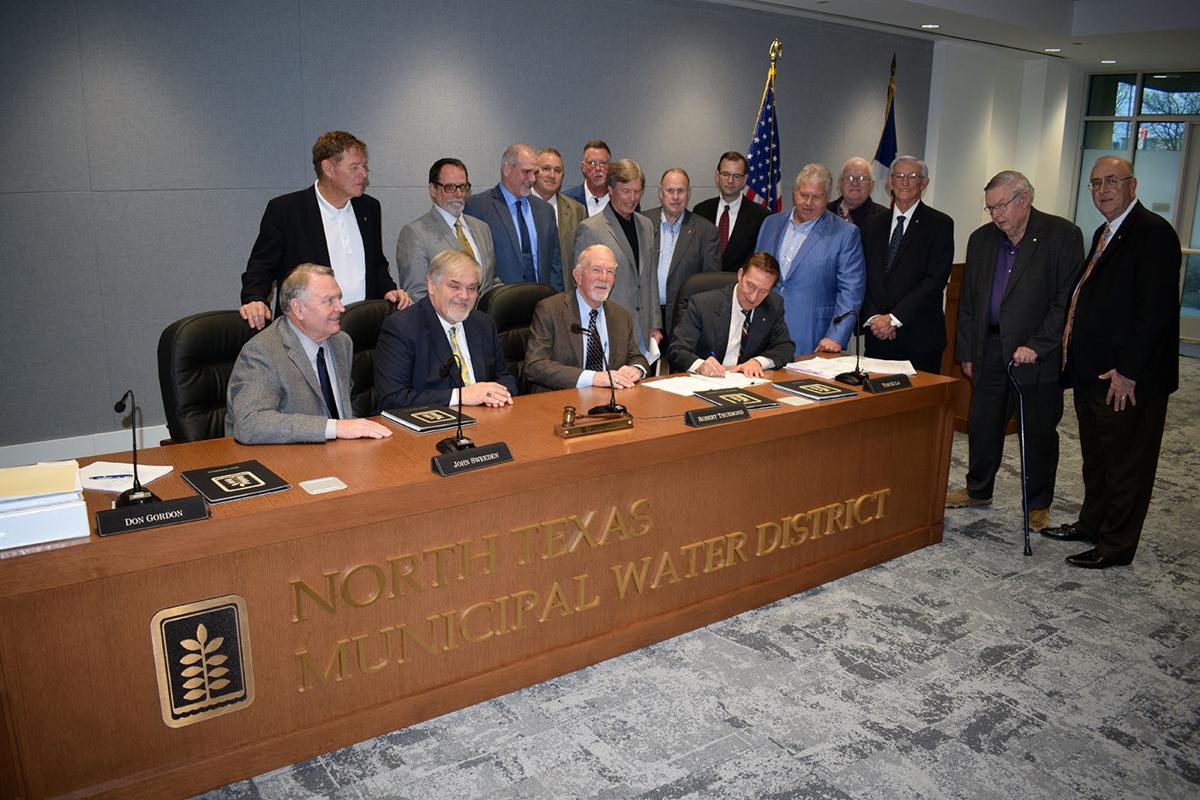 NTMWD executive director Tom Kula signs the approval for the Bois d’Arc Creek Reservoir permit. The the district received federal approval to construct the reservoir, which is expected to be complete by 2022. 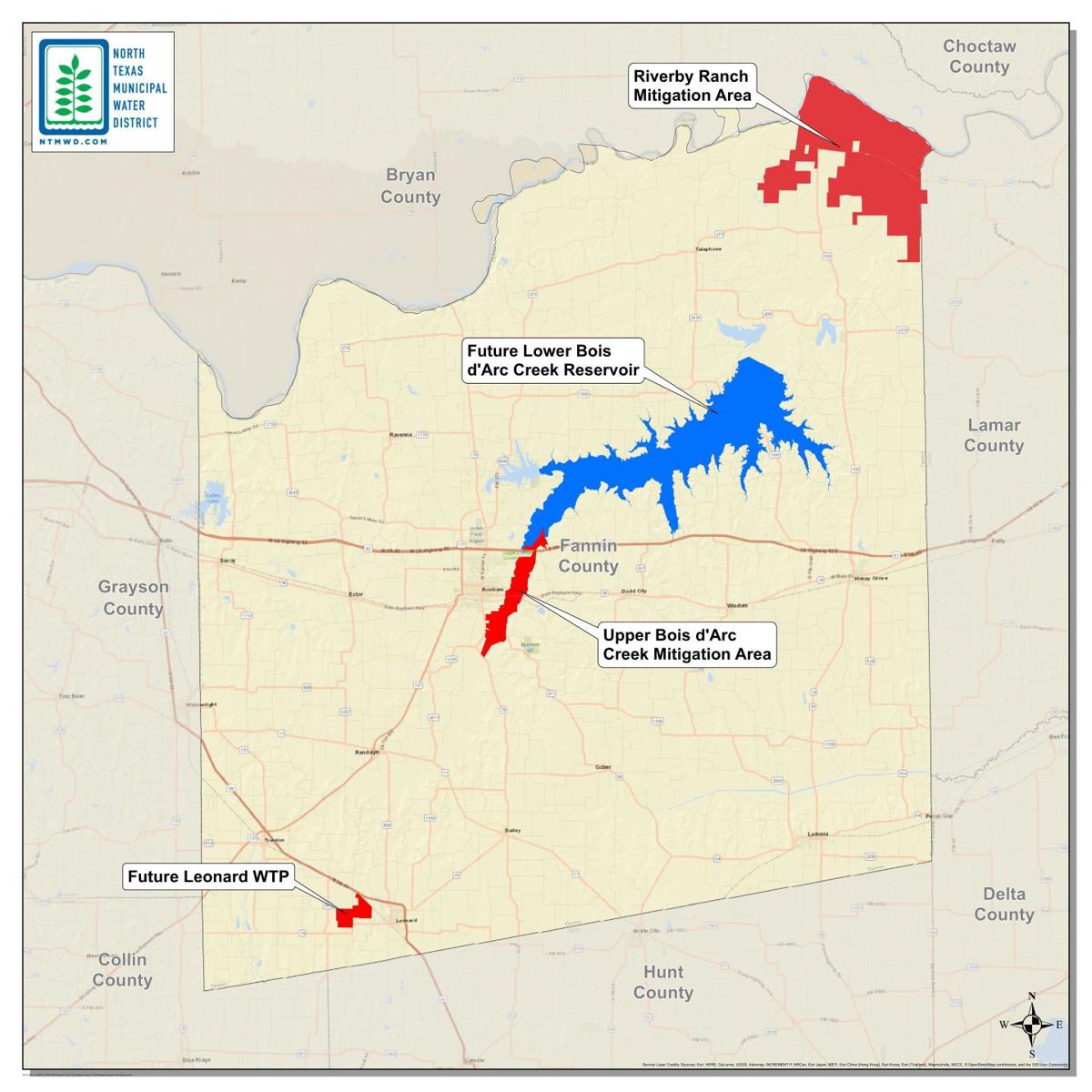 NTMWD executive director Tom Kula signs the approval for the Bois d’Arc Creek Reservoir permit. The the district received federal approval to construct the reservoir, which is expected to be complete by 2022.

The U.S. Army Corps of Engineers (USACE) issued its Record of Decision (ROD) and has granted a 404 permit to allow construction to begin on the long-awaited Lower Bois d’Arc Reservoir (LBCR). The North Texas Municipal Water District (NTMWD) has been working for over 15 years with federal, state and local officials on planning for the new lake that will provide water for the growing communities it serves.

The 16,641 surface acre lake will be located northeast of the city of Bonham in Fannin County. This is the first reservoir to be built in Texas in 30 years. Construction is planned to begin this spring with completion in 2022.

“This is a major milestone for a critical project that will provide water to 1.7 million people living in about 80 communities in North Texas. The lake will be one of the key sources of water to meet the needs of a growing region expected to double in population in the next 50 years,” said Robert Thurmond of Wylie, President of the NTMWD Board of Directors.

The permit was required under the federal Clean Water Act and involved a thorough and lengthy process that requires avoiding and minimizing environmental impacts and identifies ways to offset those that do occur. Key agencies and entities involved in the process were USACE, U.S. Environmental Protection Agency (EPA), Texas Commission on Environmental Quality (TCEQ), Texas Parks and Wildlife (TPWD), Texas Water Development Board (TWDB), Fannin County and the city of Bonham, along with other agencies and organizations.

“Reservoirs are an absolute necessity in the state of Texas where most are manmade,” said Terry Sam Anderson of Mesquite, the longest serving NTMWD member of the board. “This historic milestone is a result of significant planning, investment and support from the 13 Member Cities which are represented on the Board of Directors."

“It is a great example of the value and importance of regional water planning and collaboration among communities for the shared need of a long-term, reliable water supply,” he said.

The federal permit process was expedited thanks to Johnson’s bipartisan amendment included in the Water Infrastructure Improvements for the Nation (WIIN) Act (S. 612), which was signed into law on Dec. 16, 2016. The amendment was co-sponsored by North Texas Representatives Pete Sessions, John Ratcliffe, and Eddie Bernice Johnson.

“This permit is great news for North Texans,” said Johnson. “Drought is no stranger to Texas, which is why making sure we have the water we need has been a longstanding priority of mine. Many folks may not be aware that our existing local reservoirs will soon be unable to meet the water demands of our area. You see, at Collin County’s current rate of projected population growth, by 2022 there is a high risk of a water shortage unless this new reservoir is built. And the impact of not having this new reservoir would impact daily lives as well as our local economy. This goes beyond just watering the yard. It’s about water from the faucet. But with four years needed to build and fill the reservoir, we’ve been cutting it close. I am proud to have successfully led the bipartisan effort with my neighboring colleagues to expedite the issuance of the permit. North Texans want, need, and deserve access to clean, reliable water – and it’s great to see the Lower Bois d’Arc Creek Reservoir finally becoming a reality.”

Construction of the project and other system improvements is estimated to cost more than $1.2 billion (2016 dollars). The TWDB has already approved $1.2 billion in low-interest funding for the project through the State Water Implementation Fund for Texas (SWIFT) program, which is anticipated to save NTMWD and ratepayers nearly $200 million in financing costs.

For additional information on the Environmental Impact Statement and the DA Record of Decision, visit swt.usace.army.mil/Missions/Regulatory/Tulsa-District-Environmental-Impact-Statements/

This is great news! Go to www.Boisdarclake.com for updates!