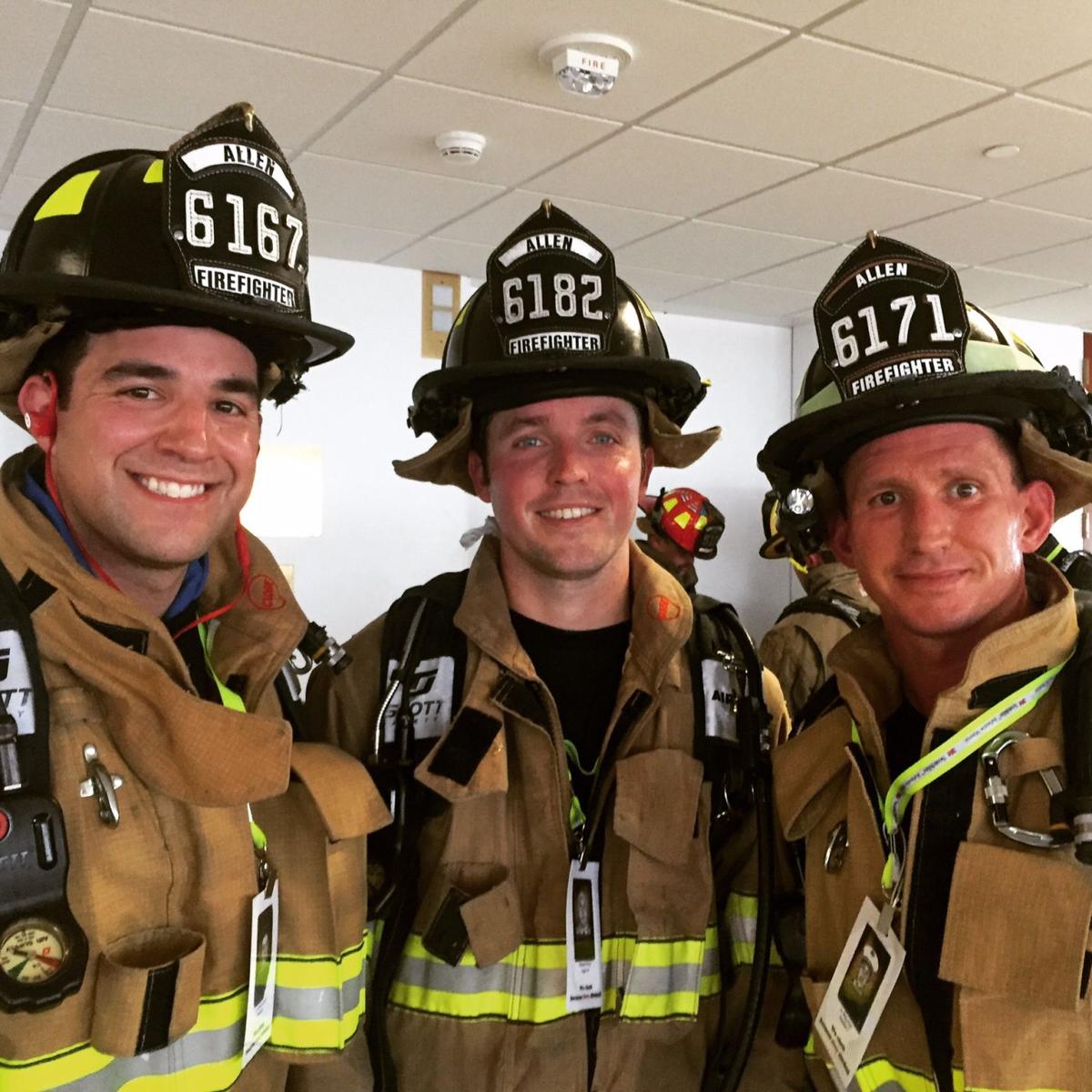 From left, Jason Reyes, Nolan Skidmore and Jeremy DeVore are members of the Allen Fire Department who have participated in the Dallas 9/11 Memorial Stair Climb, a symbolic gesture of what first responders went through on the day of the Sept. 11, 2001 attacks on the World Trade Center. Reyes and DeVore will participate in this year’s climb. 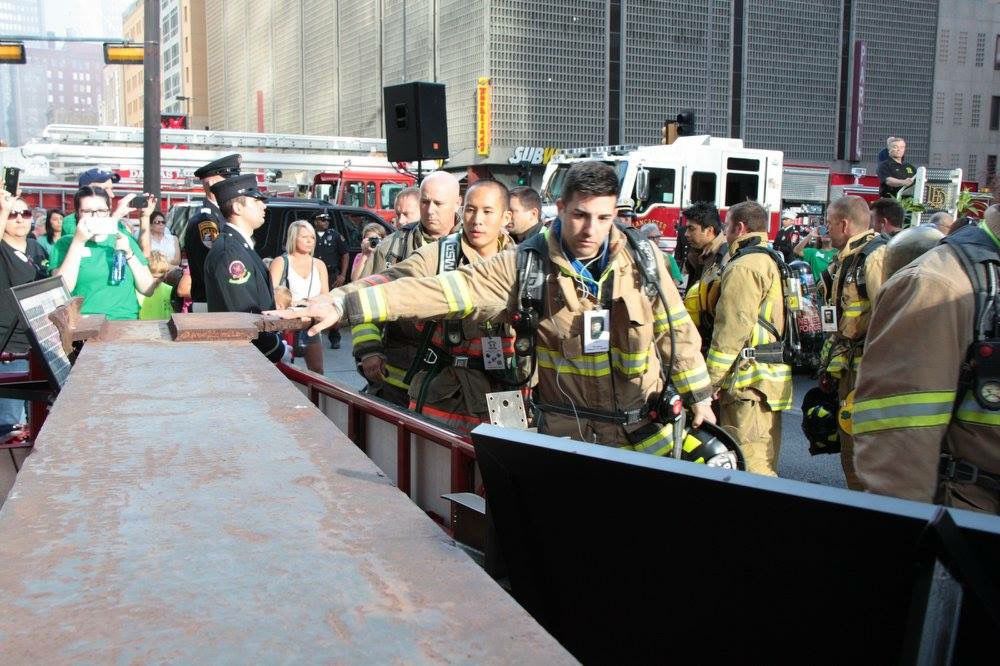 Reyes lays his hand on a piece of the World Trade Center that was brought from New York City to Dallas.

From left, Jason Reyes, Nolan Skidmore and Jeremy DeVore are members of the Allen Fire Department who have participated in the Dallas 9/11 Memorial Stair Climb, a symbolic gesture of what first responders went through on the day of the Sept. 11, 2001 attacks on the World Trade Center. Reyes and DeVore will participate in this year’s climb.

Reyes lays his hand on a piece of the World Trade Center that was brought from New York City to Dallas.

On Sept. 11, 2001, fire and police personnel across America experienced the acute loss of 422 of their brothers and sisters in the terrorist attacks on the World Trade Center Towers in New York City.

Since 2011, first responders from around North Texas have memorialized them in the Dallas 9/11 Memorial Stair Climb, joining other agencies in the U.S. and Paris, London, New Zealand and Australia.

On Sept. 9, 422 volunteers will climb Renaissance Tower, 1201 Elm St. in downtown Dallas. An opening ceremony will bring the climbers together for a group photo at 8 a.m., and traditional public safety tributes will be performed during a ceremony after the climb.

Allen firefighters Jeremy DeVore and Jason Reyes and policemen Sean Fourcand and Thomas Van Benthuysen will be among the symbolic climbers, carrying the name, picture and accountability tag of a firefighter or police officer who was killed in the Sept. 11 attacks. Climbers will take 55 flights up Renaissance Tower then take the service elevator down before climbing again. Once they reach the top, climbers place their accountability tag on a board, say their name out loud and ring a bell to signify that their person has reached the top. Local fallen public safety officers will be also be honored.

Since Reyes first did the climb in 2011, he’s done it in honor of Lt. Stephen Harrell of Battalion Seven, who was one of the first to arrive on the scene of the attacks on Sept. 11. Reyes said he wanted to get to know Harrell a little bit since he was climbing for him, so he read up on Harrell on his memorial webpage and even got to meet with some of his close friends who came down from New York to Dallas.

The Sept. 11 attacks have always been personal to Reyes, he said. The day before the attacks, he had signed up to join the United States Air Force as a firefighter. It was a sign, he said, that he was doing what he was meant to do.

DeVore, who will be climbing Renaissance Tower for the third time this year, said he took the stair climb as a personal challenge to know what it was like for first responders in New York to race up the stairs of the World Trade Center.

“It puts in perspective what they had to go through up there and how tough it is,” he said. “You’re pretty exhausted. You’re trying to get enough fluids back into your system. You’re not going to do anything else the rest of the day, I know that.”

Choreographed around the events of Sept. 11, 2001, the climb incorporates symbolism in an intensely physical setting, according to a news release from Dallas Stair Climb. The event begins with an opening ceremony steeped in traditional fire and police memorial service elements. A moment of silence at 8:46 a.m. marks the time Flight 11 hit the North Tower. Immediately following, 343 firefighters, 70 law enforcement, and nine EMS personnel begin their trek up the stairs – 110 floors – equivalent to the height of the former World Trade Center Twin Towers, the release states.

Physical fitness is an important part of being a firefighter, Reyes said, so he hasn’t had to work too hard to prepare to climb 110 flights of stairs. He’ll do some rowing, use a Stairmaster and do other cardiovascular exercises.

DeVore said he works up a good lather by the time he’s done at the stair climb.

“We have gray shirts for the fire department. They’re a dark gray by the time you’re done. Your socks are sweating. Your boots, you can tip them over and water comes out,” he said.

The event is family-oriented and open to the public. There will be activities such as an obstacle course, trying on bunker gear, touring first responder vehicles and vendor areas.

“It puts in perspective what they had to go through up there and how tough it is.”