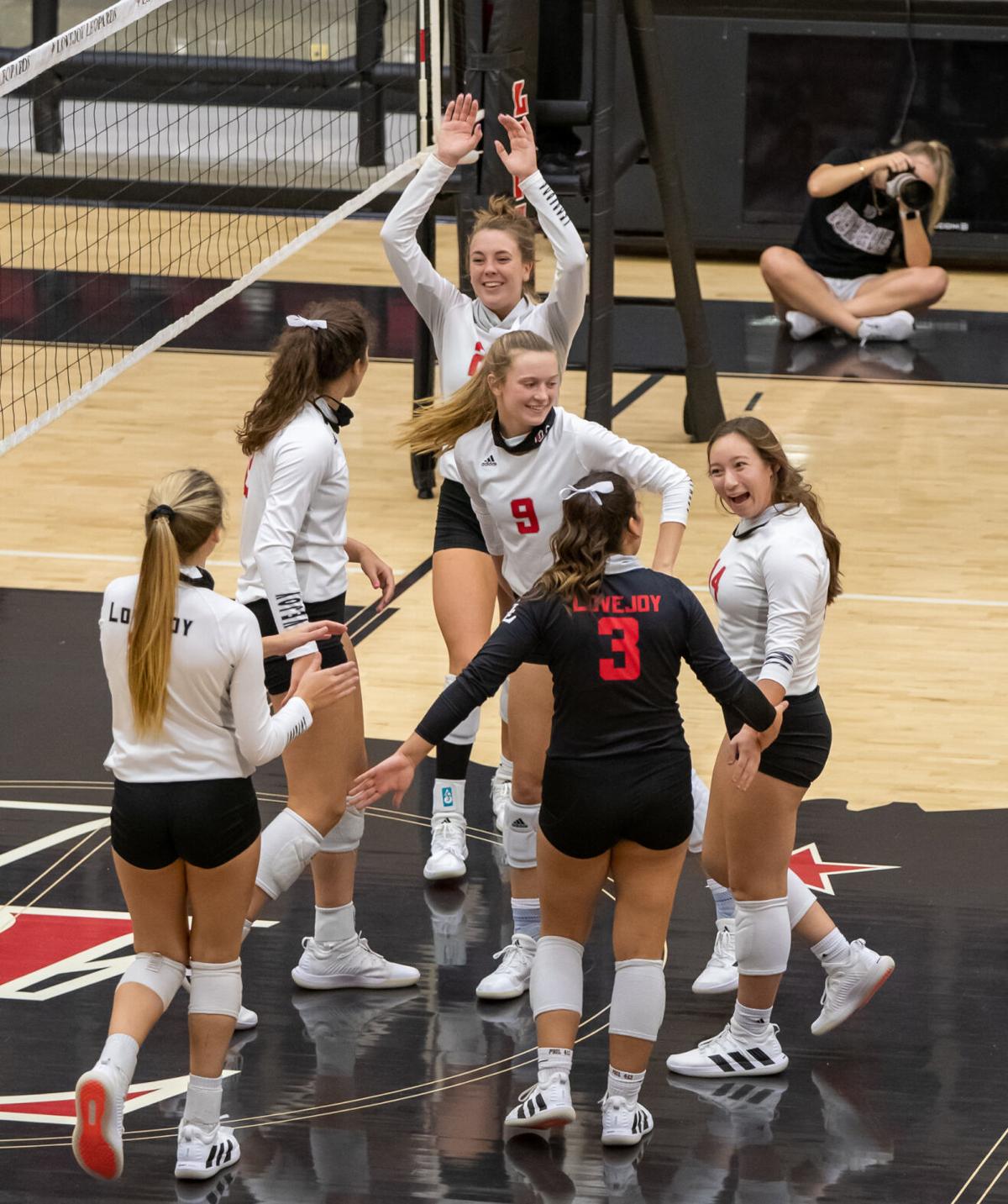 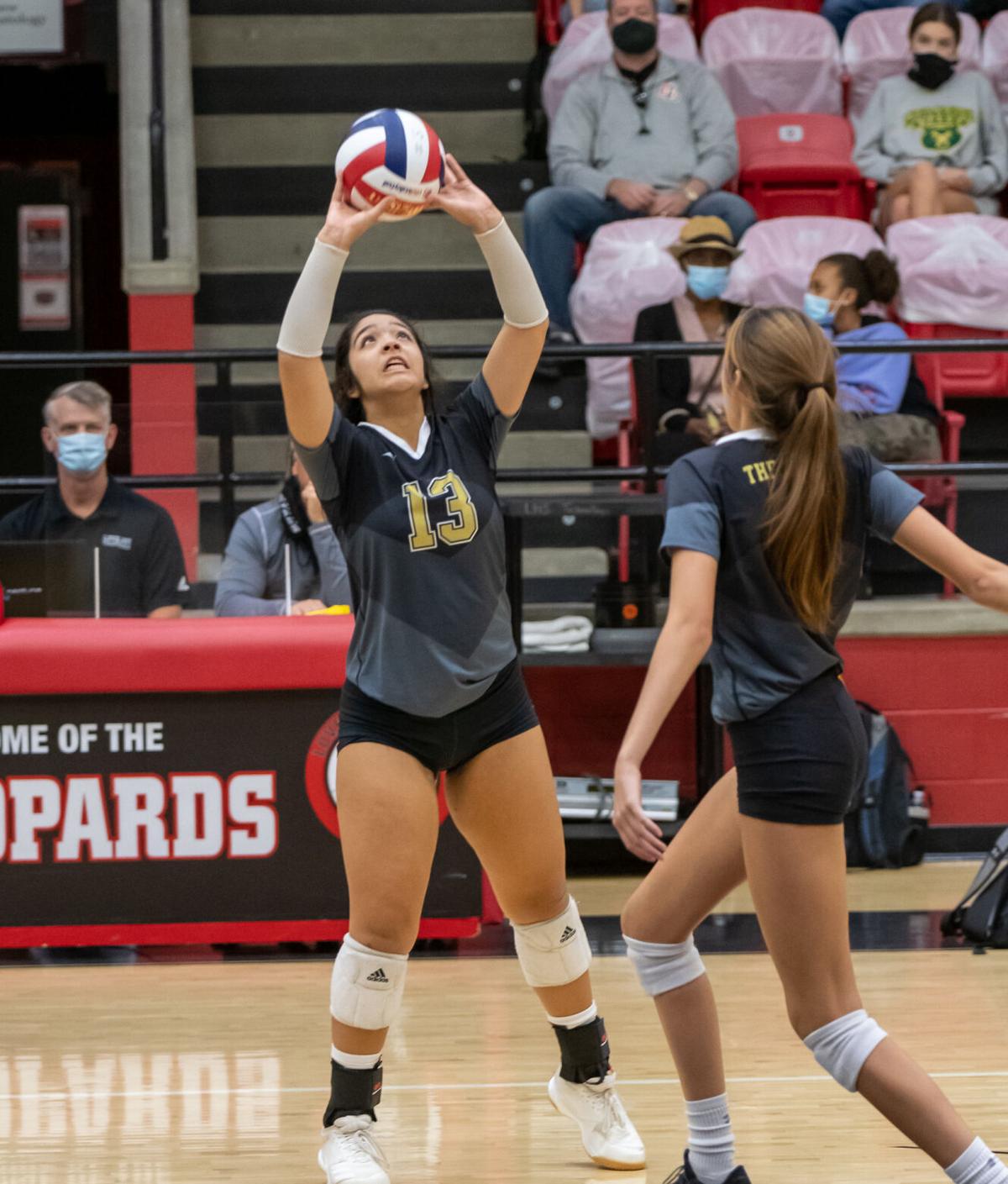 The Colony senior Bella Navarrette sets up a kill attempt for a teammate during Tuesday’s District 10-5A opener at Lovejoy.

The Colony senior Bella Navarrette sets up a kill attempt for a teammate during Tuesday’s District 10-5A opener at Lovejoy.

After a positive case of COVID-19 forced Lovejoy’s volleyball program to shut down for two weeks, the Lady Leopards returned to the court Tuesday for their first match of the season.

“It just felt good to play,” said Ryan Mitchell, Lovejoy head coach. “The girls haven’t played since March. To finally get an opportunity to get on the court and compete is great. And that’s what they love to do is compete. Tonight allowed us to do that.”

The Lady Leopards were allowed to practice on Monday for the first time following the two-week shutdown and head coach Ryan Mitchell used the entirety of the two-and-a-half-hour session to work with his squad on hitting, serving, serve-receive and blocking drills.

But, Lovejoy boasts a roster with years of volleyball experience. All of that experience was evident early on.

The Lady Leopards raced out to a 13-1 lead in the first set behind three kills and one block from junior middle blocker and Boston College commit Grace Milliken and two kills from senior outside hitter and TCU commit Cecily Bramschreiber.

“I was really impressed with the way that we came out having been out for so long and only one day of practice,” said Mitchell. “It was a very aggressive start for us. Luckily, these girls have a good base under them. These kids play a lot of volleyball. And they worked out and kept engaged for the two weeks that we were off.”

Bramschreiber dominated the match at times and had nine kills before watching the entirety of the third set from the bench.

Senior outside hitter Ellie Jonke led all Lady Leopards with 11 kills, three of which helped to spark Lovejoy on an 18-8 rally in the third set after The Colony had jumped out to a 12-7 lead. Junior Avery Carlson had 31 assists to go along with 13 digs and three aces.

Although The Colony (2-6, 0-1) faced double-digit deficits in each of the first two sets, the scoreboard didn’t reflect the determination by the Lady Cougars.

To prepare her team for the velocity that the Lady Leopards were going to be hit the ball in the Lady Cougars’ direction, The Colony head coach Rachel Buckley said she stood on a box during Monday’s practice and hit the ball at her players while they sat at the 10-foot line on the court.

All of that hard work in practice was evident Tuesday as the Lady Cougars were relentless in their efforts digging out the ball.

Defense finally translated to offense for The Colony in the third set.

The Lady Cougars took leads of 4-3 on a Kristen Sueltz kill, 6-3 on a service ace by Kacie Rangel and 12-7 on an ace for Natalie Hawkins.

“I am so impressed with them,” Buckley said. “Our goal is to get better every set and that’s exactly what we did. I think we had a chance to capitalize there in the third set, but I think it’s just that youth and inexperience showing up.”

Lovejoy didn’t need long to swing the momentum back in its favor.

With the Lady Leopards not having a preseason due to COVID-19, which included the cancellation of a match of national powers between No. 2 Lovejoy and No. 4 Denton Guyer, Lovejoy’s younger players received much-needed playing time in the third set.

It took a little time for them to knock off the rust, but once they did, Lovejoy caught fire.

Jonke had three kills to spark a huge run after the Lady Cougars had led 12-7. Junior right side hitter Avery Villareal put the Lady Leopards ahead for good at 16-15 with a kill of her own.