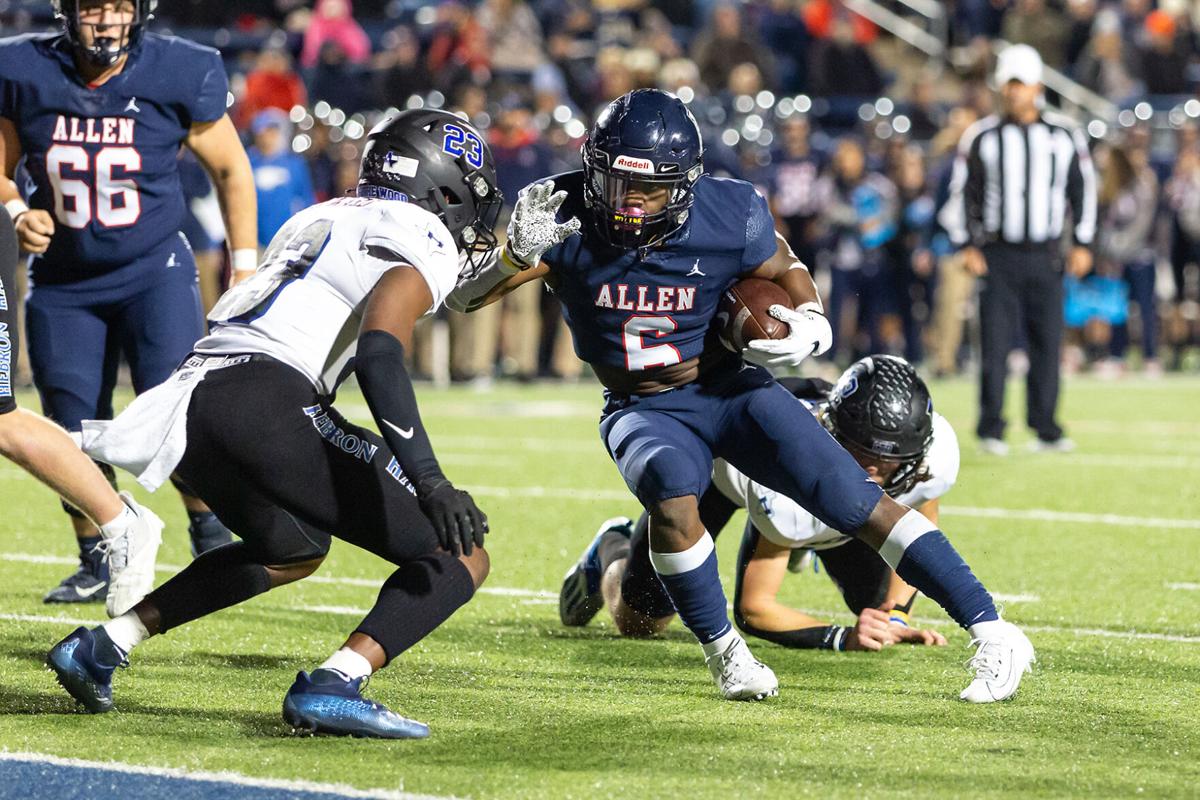 Allen junior Devyn Turner rushed for 211 yards and four touchdowns in the Eagles' 59-30 bi-district playoff win against Hebron on Friday at Eagle Stadium. 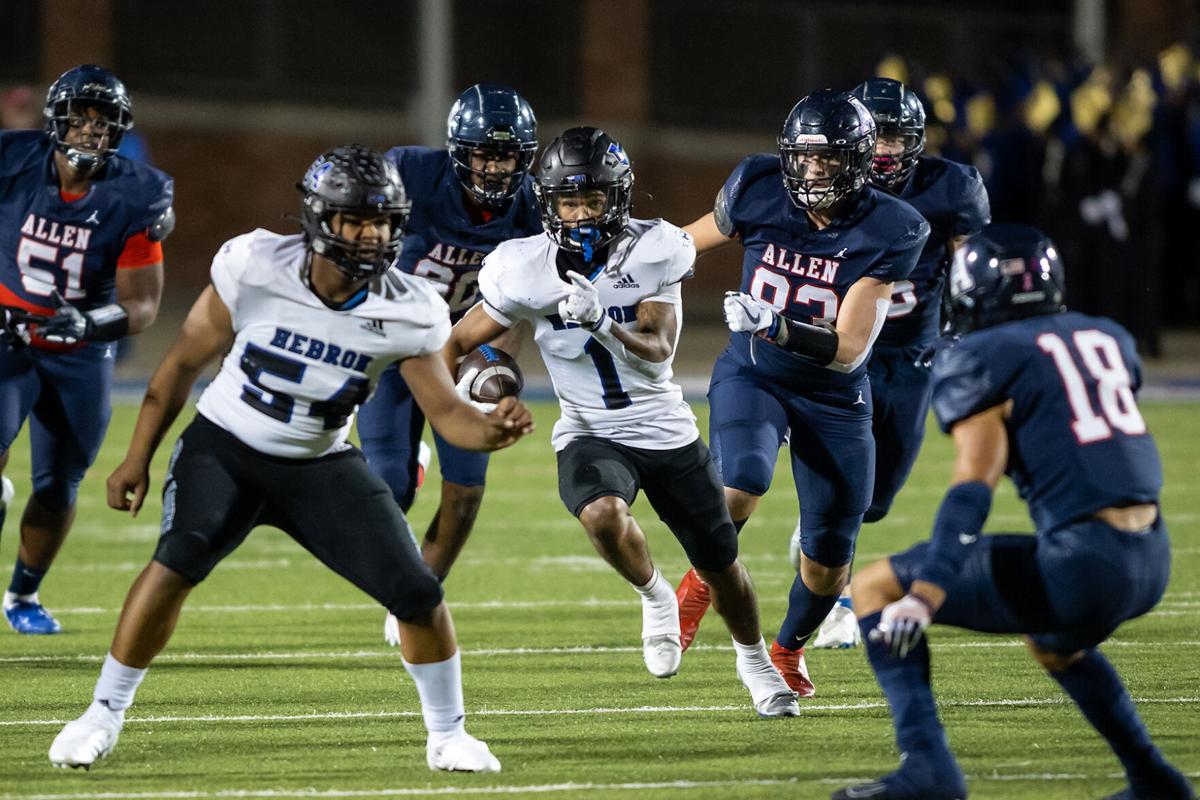 Allen junior Devyn Turner rushed for 211 yards and four touchdowns in the Eagles' 59-30 bi-district playoff win against Hebron on Friday at Eagle Stadium.

Allen senior Jaylen Jenkins returned to the lineup Friday after missing last week's game against Denton Braswell with a knee injury. But it was junior Devyn Turner that carried the load.

Jenkins and Turner combined for five rushing touchdowns in Allen’s 59-30 rout of Hebron at Eagle Stadium. Jenkins touched the ball just four times for 37 yards. Turner had another highly-efficient performance for the Eagles (9-2), rushing 11 times for 211 yards – an average of 19.2 yards per tote – with four touchdowns.

Allen’s running game was on point all night, generating long run after long run. In addition to the work put in by Jenkins and Turner, sophomore quarterback Mike Hawkins and sophomore tailback Kayvion Sibley had long runs of their own.

Hawkins had runs of 59 and 45 yards with the latter going for a touchdown. Sibley exploded for an 80-yard touchdown run in the third quarter.

“We’ve got depth, and that’s the biggest thing for us,” said Chad Morris, Allen head coach. “We have a great offensive line, and for those guys to be able to do things like that is huge.”

Allen advances to the area round and will play Lake Highlands at 7 p.m. Nov. 19 at Globe Life Field in Arlington. The Wildcats held on to beat South Grand Prairie 29-24. Hebron finished its season with a 5-6 record.

Although the final score showed that Allen won going away, Hebron had a chance to take a lead in the first quarter.

Allen took a 7-0 lead on a one-yard run up the middle by Turner on the fourth play of the game’s initial drive. A 57-yard pass play from Hawkins to senior wide receiver Jacob Brasher – open in the middle of the field – set up the score.

Hebron moved the ball well on its first drive, thanks to timely runs and passes by Hawks senior quarterback Jacob Buniff.

Buniff had Hebron positioned at the Allen 11 after a 14-yard pass to senior Takoda Bridges. The drive stalled after three straight incomplete passes by Buniff. Pressure by Eagle defensive tackle DJ Hicks on third down forced Buniff into throwing the ball short of his intended target on third down. Lane Haworth made a 28-yard field goal, cutting the Allen advantage to 7-3.

But the Hawks couldn’t do anything with the interception. The drive stalled out a short time later and Haworth missed a 44-yard field goal attempt, keeping it a four-point game.

“When you play a great team like Allen, a team that’s got so many good players, you’ve got to take advantage of your opportunities,” said Brian Brazil, Hebron head coach. “It would have been nice to score there, but we tried a field goal and missed it. Then they moved the ball and I thought that we stripped it. That would have been a score right there, but they said that it was stopped because of forward progress. But you’ve just got to deal with that.

“It just got away from us. We didn’t tackle well tonight, and when you don’t tackle against a good team like that, you’re not going to do well.”

It was all Allen from there on out.

And perhaps the biggest jolt in momentum for the Eagles came when they were able to overcome 1st down and 40 just moments later.

The Eagles put themselves in that situation on two personal foul penalties on one play – the first on a chop block and the other on a late hit. But the explosiveness of Allen’s offense showed that they can overcome any down and distance.

Turner burst 26 yards on the very next offensive play and Hawkins found Cooper Cole for a 22-yard gain for a first down. Jenkins capped off the drive with a 1-yard for a score and a 14-3 lead for Allen with 53 seconds left in the first quarter.

It was the first of 24 unanswered points for Allen. Caden Williams made a 38-yard field goal on the Eagles’ next drive and Hawkins completed a 10-yard touchdown pass to Jordyn Tyson two minutes later to bump Allen’s lead to 24-3.

Allen’s defense also got in the act. An interception by Malakai Thornton – his first of two picks on the night – set up the Eagles at the Hawk 2-yard line. Turner did the rest, finding pay dirt on the very next play for a commanding 31-3 lead.

Junior defensive lineman DJ Hicks delivered constant pressure all night. He finished with two sacks, assisted on another, two quarterback pressures and a tackle for loss.

“DJ is just a tremendous player,” Morris said. “Our defensive line is playing really well. Our linebackers are playing well. It was just a great team effort.”

Hebron used two quarterbacks. Buniff started and rotated playing time with Braxton Baker as the evening progressed. Buniff completed 14-of-27 for 229 yards and two touchdowns. Baker went 11-of-22 for 139 yards and a score.

Hebron was held out of the end zone until Bridges hauled in a 49-yard reception with 37 seconds left in the first half. Bridges was brilliant in defeat, catching nine passes for 208 yards and a pair of scores.

“He had the best senior season that anyone has had receiving at Hebron High School,” Brazil said of Bridges. “That says a lot of things about him. He’s a great player, a great competitor."

Creekview’s long-awaited return to the postseason hit a snag on Friday behind a torrid effort from Wichita Falls Rider. The Mustangs were on the receiving end of 443 yards in the first half en route to a 59-13 loss on Friday at Memorial Stadium in Wichita Falls in the bi-district round of the Class 5A Division II playoffs.

Creekview trailed at the half, 49-6, finding the end zone with 10:33 remaining in the second quarter after quarterback Garrett Palacios found Jordyn Crain over the middle for a 23-yard touchdown. That score cut the deficit to 21-6 before Rider responded with 28 consecutive points to close out the half.

The Mustangs finished the night with 280 yards of offense, including 85 on the ground by Isaiah Evans. He scored on a 1-yard run in the fourth quarter.

Creekview was making its first appearance in the playoffs since 2015, a high mark in head coach Tony Castillo’s first season at the helm. The Mustangs closed out their 2021 campaign at 6-5 overall.