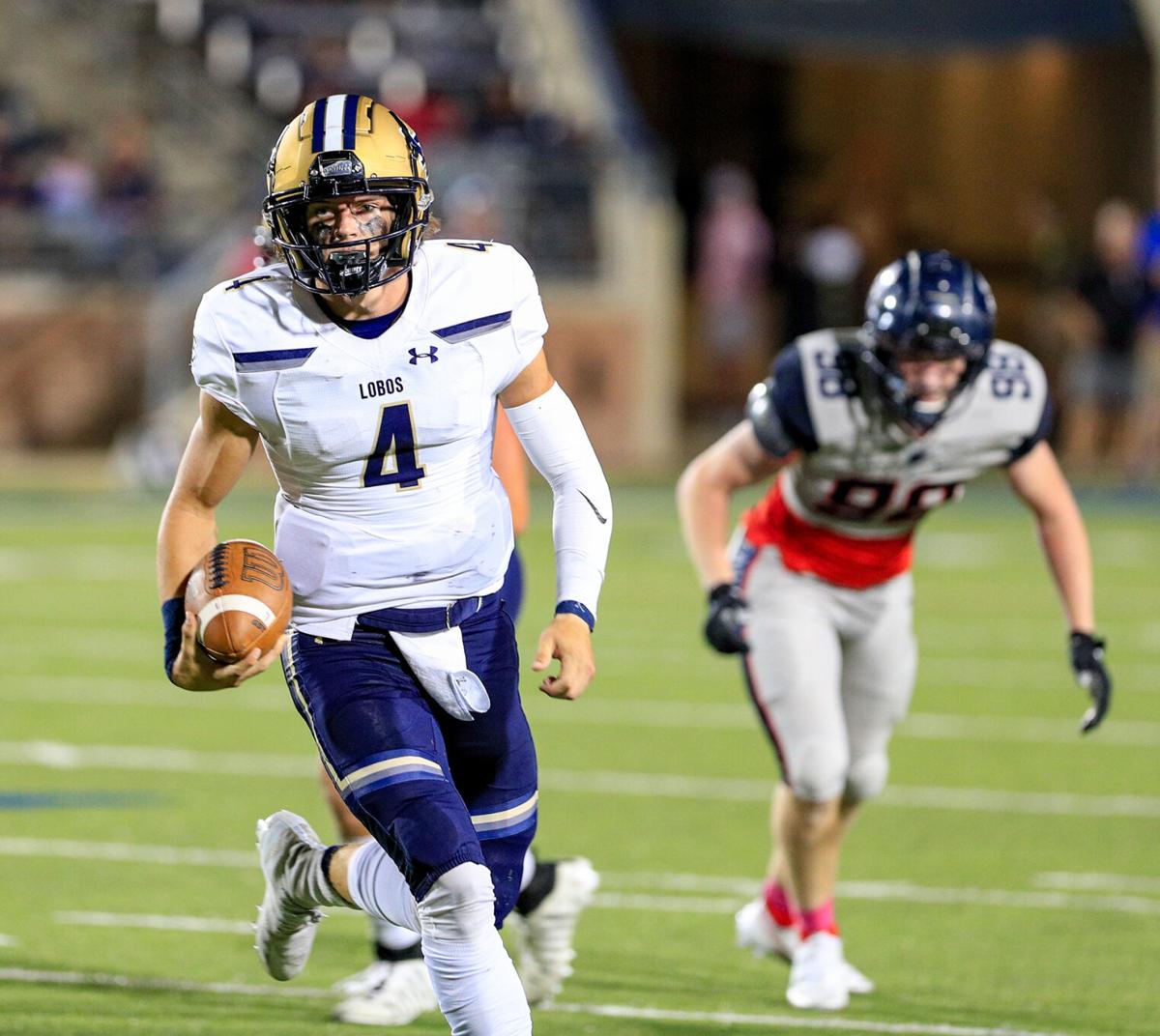 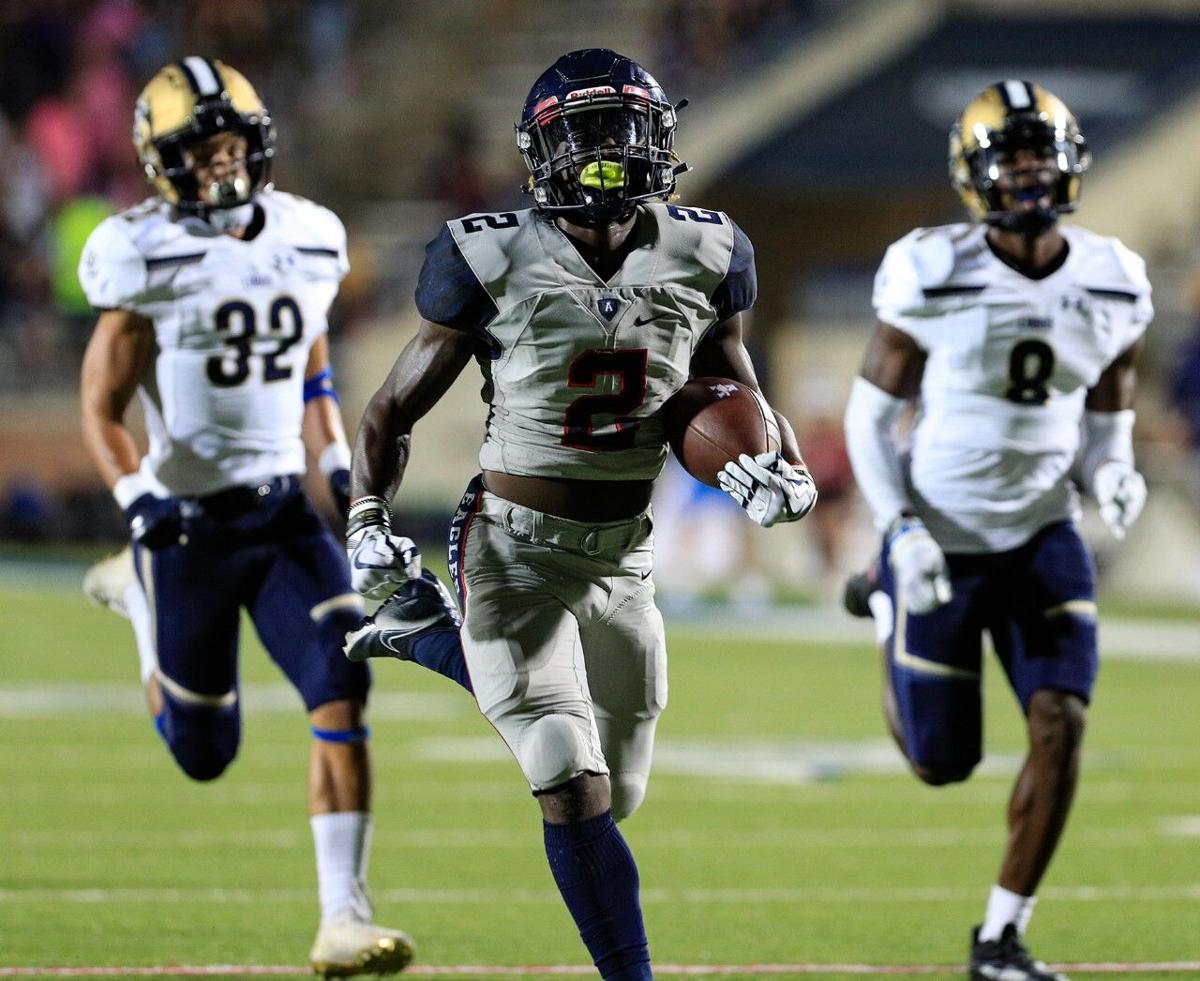 ALLEN – The Little Elm football team got another great effort from senior quarterback John Mateer on Friday night. But it was a vaunted Allen rushing attack that allowed the Eagles to cruise to their fourth straight victory.

One week after Denton Braswell junior Jaylon Burton exploded for 363 rushing yards and six touchdowns against Little Elm, Allen senior Jaylen Jenkins scampered for 260 yards and four scores in a 71-29 rout for the Eagles over the Lobos at Eagle Stadium.

Allen’s running game couldn’t be stopped Friday, carving up the Little Elm defense to the tune of 530 rushing yards and nine rushing touchdowns.

“We needed this,” said Chad Morris, Allen head coach. “We needed to play better because we hadn’t played to our standard. We challenged our guys all week long to have an edge about themselves. They did. They came out, played hard.”

It took less than a minute for Jenkins to show off his elusiveness. On the game’s fourth play from scrimmage, the 5-foot-7, 170-pound tailback took the handoff from sophomore quarterback Mike Hawkins and burst 43 yards for a touchdown and a 7-0 lead.

“He’s just a phenomenal athlete,” Morris said. “He does a great job of letting his blocks set up. I’m really pleased with Jaylen. But he would be the first to tell you that he’s got a pretty good offensive line in front of him.”

On the flip side, Mateer did all that he could to keep the Lobos in the game.

With the Eagles focused on stopping the run, Mateer did a majority of his damage through the air. He attempted 29 passes in the first half and 232 passing yards and a pair of touchdowns by the end of the second quarter – the first on a 38-yard pass from senior Cameran Taylor-Butler and the second on a 6-yard pass to senior Dylan Evans.

Mateer finished the game 26-of-35 for 346 yards and four total touchdowns. Taylor-Butler was Mateer’s favorite target on the night, hauling in nine pass receptions for 134 yards. Evans also turned in a solid performance, catching five passes for 102 yards.

“He’s done what he’s done all year,” Little Elm head coach Kendrick Brown said of Mateer. “He played his heart out. But tonight was too much for that for him, because defensively, it wasn’t a very good game. We’ve got to play better defensively.”

But for as well as Mateer played, it was two fumbles inside Allen territory and an Eagle running attack that proved costly as the Lobos dropped their second straight game after a 5-0 start to the season.

With Allen leading 7-0, Little Elm put together a methodical drive on their initial possession of the ballgame, advancing the ball all the way to the Eagle 21-yard line after a 19-yard pass from Mateer to Taylor-Butler. But two plays later, the snap sailed over Mateer’s head and the ball was recovered by Allen’s Michael Momoh.

Allen converted the turnover into a 22-yard run by Jenkins a few minutes later for a 14-0 lead.

“That was huge,” Morris said. “Obviously, the two turnovers that we created down deep in our end of the field was big and being able to capitalize on those was huge. We’re just getting better each week.”

In the second quarter, with Allen leading 29-7, Little Elm had possession at the Eagle 12-yard line. But, on a play in which Mateer threw the option pitch to sophomore Semja Ellis Jordan, Ellis Jordan struggled to hang onto the ball. Allen junior DJ Hicks stripped the ball out of the hands of Ellis Jordan and it was recovered by senior Jason Williams.

The Eagles put away the game just before halftime.

Turner ran for Allen’s sixth rushing touchdown of the first half on a 14-yard run for a 43-7 lead for the Eagles with 3:21 left in the second quarter.

Little Elm will look to snap its two-game losing streak next Friday against McKinney Boyd at Lobo Stadium. Allen will be at C.H. Collins Athletic Complex that same night for a 7 p.m. kick against Denton Guyer.