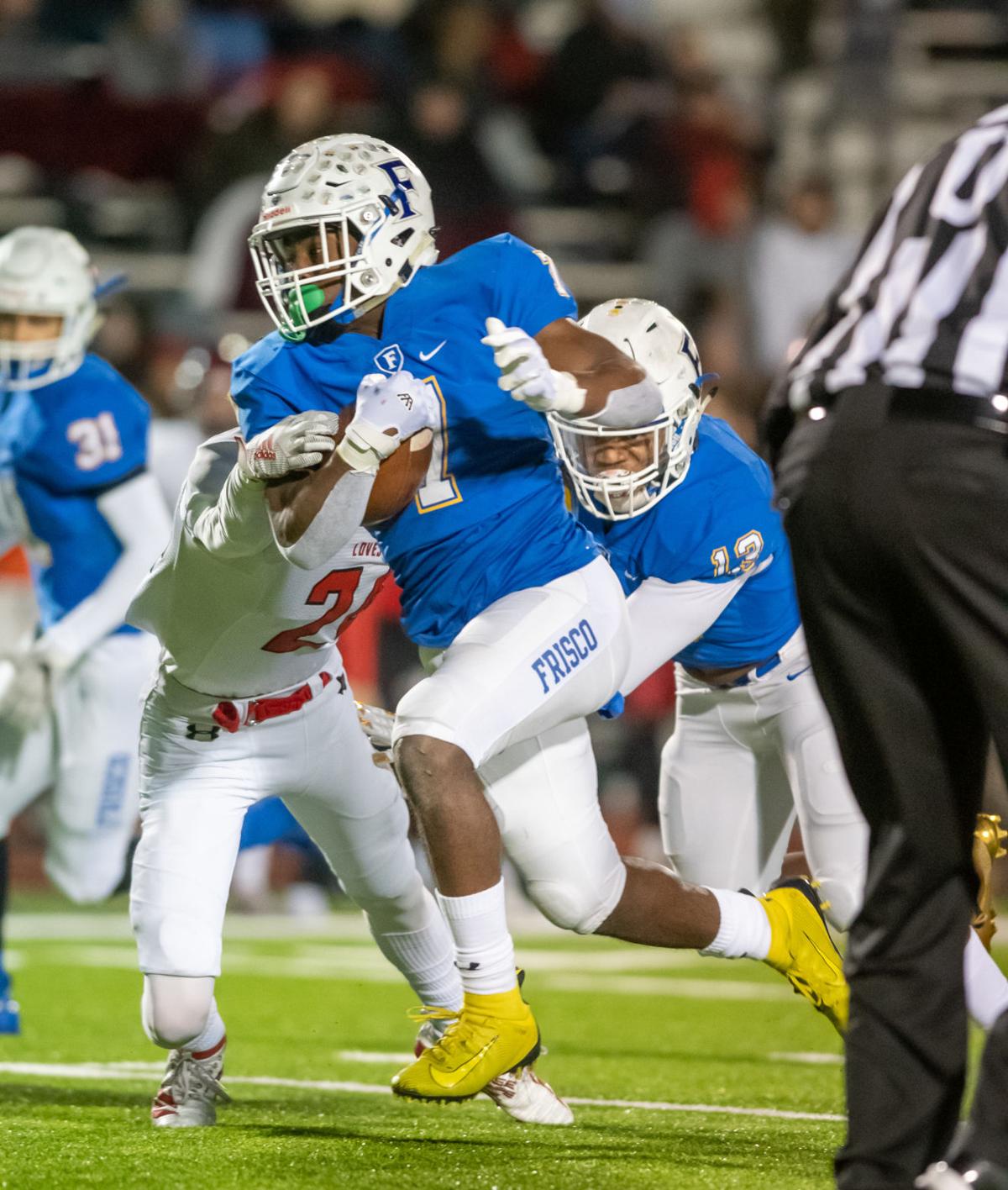 Frisco senior running back Bryson Clemons rushed for 177 yards and three touchdowns in the Raccoons’ 35-17 victory Friday over Lovejoy. 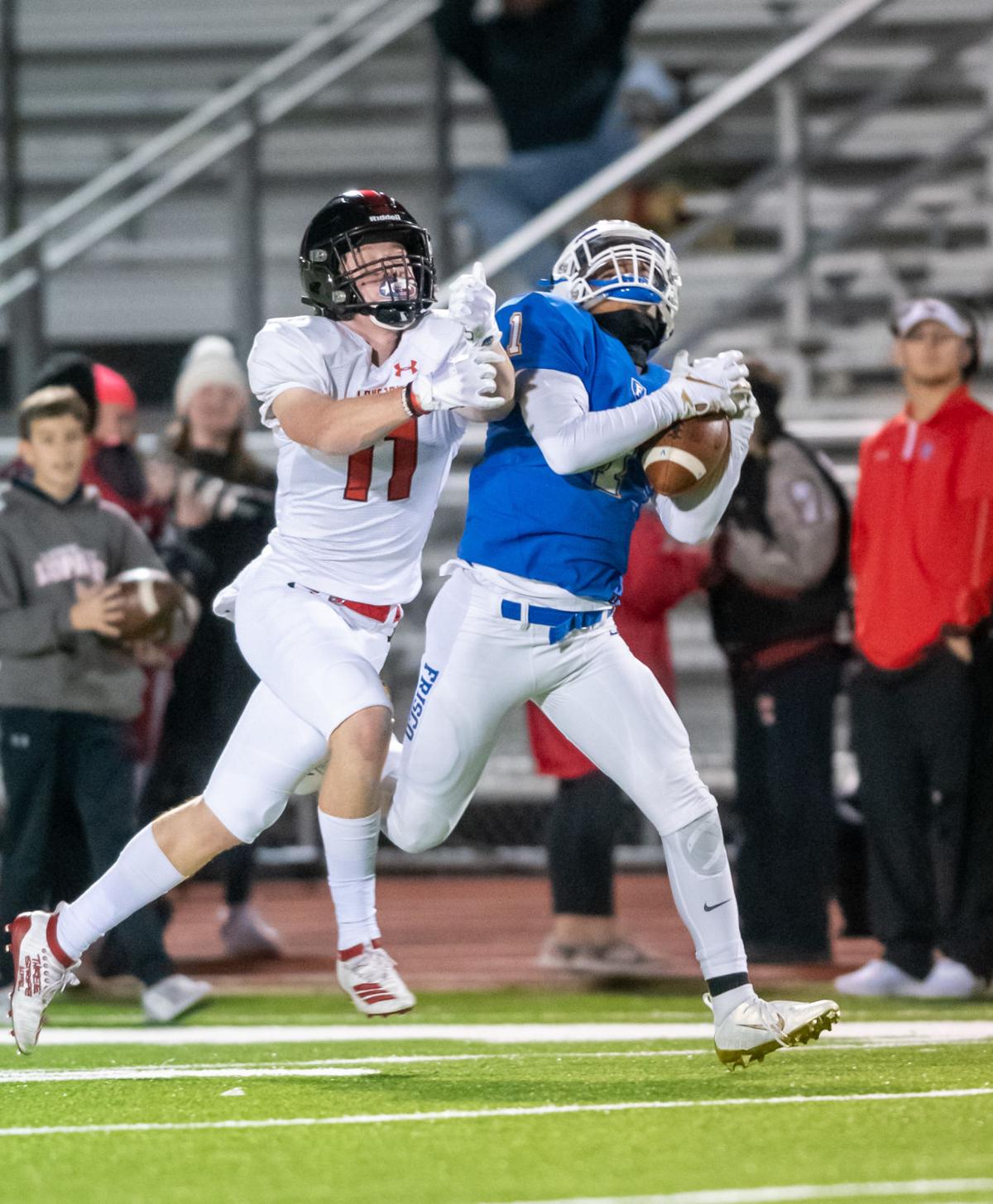 Frisco junior cornerback Myles May intercepted Lovejoy’s Noah Naidoo in the first half to shift the momentum in the Raccoons’ favor.

Frisco senior running back Bryson Clemons rushed for 177 yards and three touchdowns in the Raccoons’ 35-17 victory Friday over Lovejoy.

Frisco junior cornerback Myles May intercepted Lovejoy’s Noah Naidoo in the first half to shift the momentum in the Raccoons’ favor.

FRISCO – Just two years removed from a winless 2017 campaign, the Frisco football team has ascended all the way to the ranks of district champs.

The Raccoons rallied from an early 14-point deficit Friday to defeat Lovejoy, 35-17, and not just head into the postseason on a high note but also locked in the District 7-5A Division II title en route to a one-loss season.

Frisco achieved such a feat with a first-year head coach in Jeff Harbert, but he knows this accomplishment was a team effort.

“It’s more about us and our program and everything we’re about,” he said. “I’m tickled to death, but I’m just glad it’s us and I’m able to share this with my coaches and players. It’s an amazing opportunity that not everyone has a chance to experience.”

The Raccoons now advance to the playoffs for the second consecutive season and will take on Greenville Thursday at The Star.

The district championship was in jeopardy in the early goings against the Leopards after they raced out to a quick 14-0 advantage by scoring on their first two drives of the game on a pair of touchdown scampers from sophomore quarterback Noah Naidoo and sophomore running back Dillon Magee.

Entering this contest, Harbert and his staff weren’t entirely sure which quarterback Frisco would face with murmurs that the season-long starter for Lovejoy under center, R.W. Rucker, would be sidelined with a shoulder injury.

Even with that assumption, the Raccoons prepared all week for Rucker, according to Harbert.

But the Frisco staff realized during pregame warm-ups that Rucker was not suited up and that they would have to shift the game plan on the fly to try and contain the shifty and elusive Naidoo.

Naidoo ran wild on those first two Lovejoy possessions, as he accounted for 80 total yards and the touchdown run, but the Frisco defense buckled down and made the proper adjustments.

“The kid that played tonight is a heck of a runner and very slippery,” Harbert said. “They were doing some things differently than we had prepared for, so they had some success.”

After the Raccoons punted on their first three drives, junior cornerback Myles May came up with the key play that shifted the momentum in Frisco’s favor when he intercepted Naidoo on a deep pass attempt.

Just four plays later, senior running back Bryson Clemons dodged and dipped his way into the end zone from 21 yards out to get Frisco on the board en route to 22 unanswered points by the Raccoons.

“We were down by 14 and they had just gotten a first down, so that interception was just so huge,” Harbert said. “We hadn’t shown we could stop them yet, but we did there and were able to score afterwards. He did a great job of jumping the route and getting to the football.”

Clemons’ 21-yard score early in the second stanza got the star senior going, as he went on to account for the next 22 Frisco points, including touchdowns from 2 and 3 yards out. He ended his night with a game-high 177 yards on 26 carries.

“Bryson was awesome tonight,” Harbert said. “Once he settled in and figured out he needed to hit this thing downhill, he really made some good cuts and moves. Once he gets to the second level, he’s really able to make some people miss.”

The Raccoons snagged their first lead of the night just seconds before the half came to a close when Blake May, who also recorded a touchdown run in the second half to put it away at 29-17, powered his way across the pylon for a successful two-point conversion to grab a 15-14 lead going into the break.

Following the scoring outburst in the opening quarter, the Leopards were held in check to just three points on a 44-yard Tyler Loop field goal the rest of the way, as Rucker’s presence was greatly missed.

“He’s the heart and soul of their team, and they missed him a lot out there tonight,” Harbert said.

Regardless of what happened on Friday, Lovejoy remains playoff bound and will take on Royse City next week in the opening round.