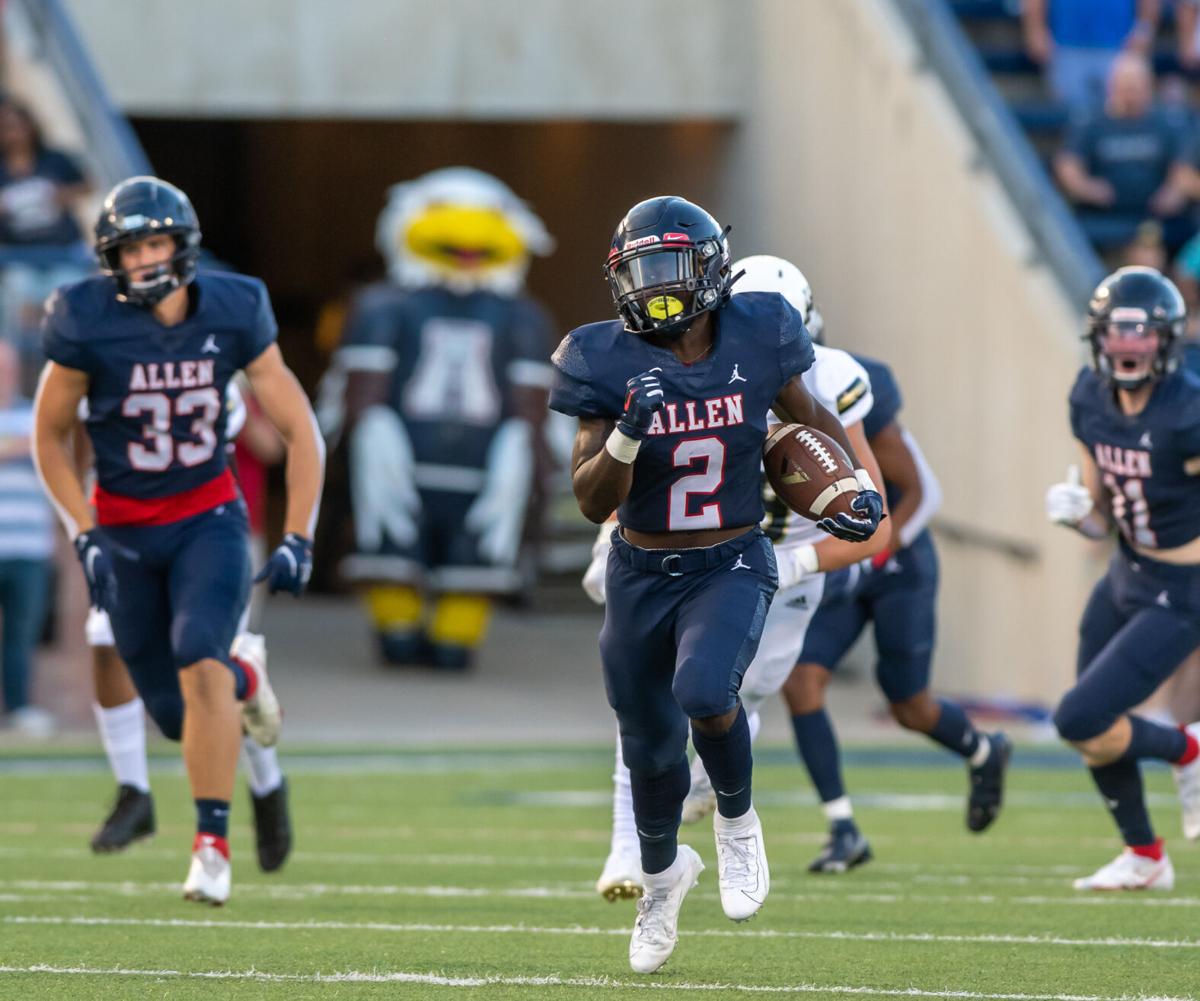 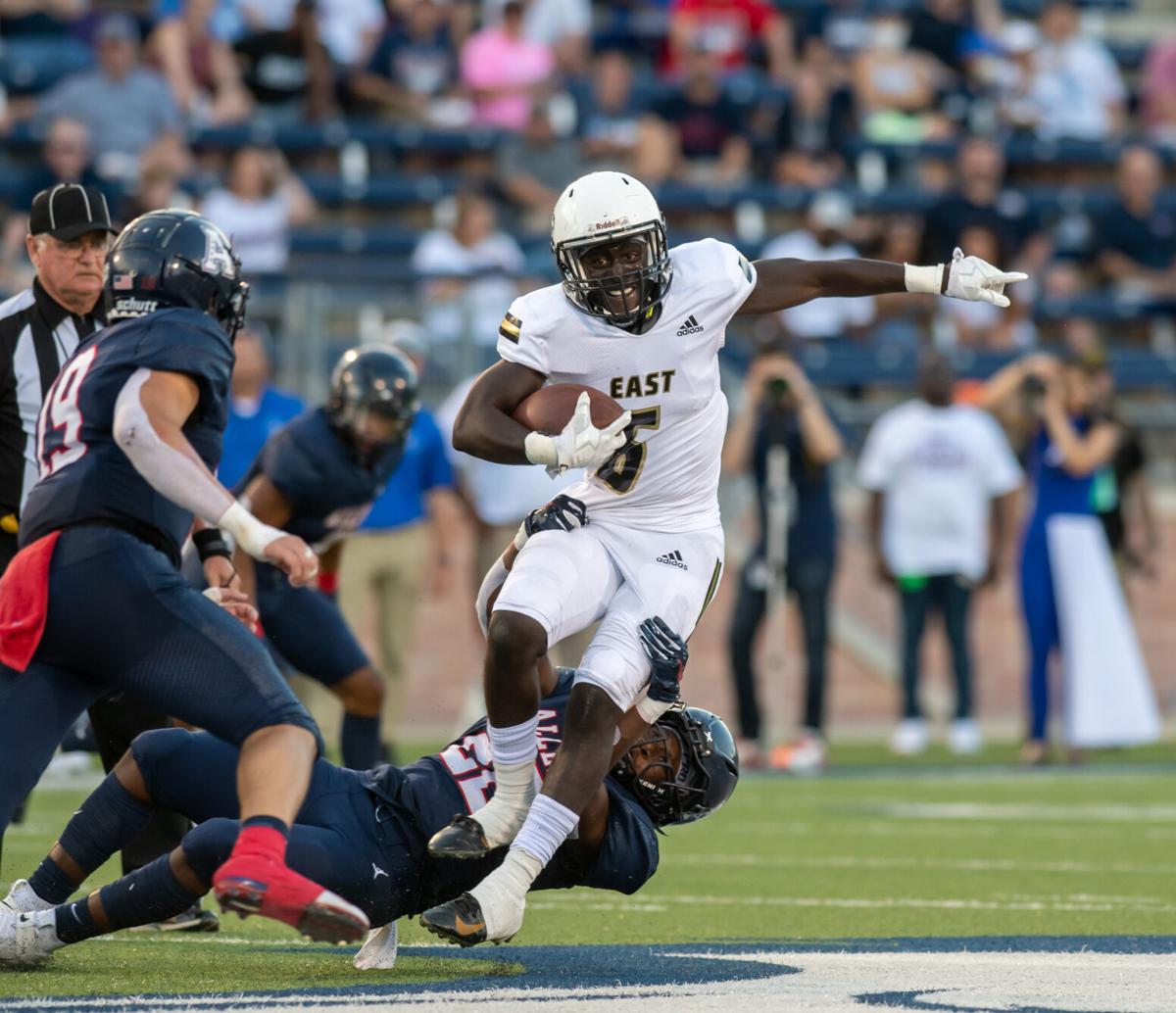 Plano East senior Ismail Mahdi gave Allen plenty of trouble on Friday, but the Panthers couldn’t keep pace with the Eagles’ own explosive ground attack in a 56-30 loss.

The Allen running back accounted for the game’s first points 14 seconds into the night on a 94-yard kickoff return for a touchdown. There was plenty more to come, as the Eagles’ star rusher logged three more rushing touchdowns and accrued 204 more yards on the ground to fuel a 56-30 victory from Eagle Stadium over Plano East.

“We know [Jenkins] can definitely be dynamic and he showed that right from the start with that opening kickoff,” Morris said. “There’s a lot of stuff to clean up, though. It’s our first game with a lot of unknowns, but I loved our effort. I thought we played hard.”

Jenkins capitalized on an inauspicious start to the night for the Panthers. East’s kickoff team was flagged for a delay of game on the evening’s opening kickoff, which averted a touchback by senior Buzz Flabiano. That sequence loomed large, as Jenkins took the re-kick 94 yards to the house for a 7-0 lead with 11:46 left in the opening quarter.

“I told my teachers to watch for that opening kickoff,” Jenkins said. “If they gave me a lane, I was going to take it.”

The Eagles’ offense struck a familiar explosiveness in its first game under Morris, and most thanks to its ground game. Allen finished the ballgame with 313 yards on the ground, good for 10.8 per carry, with Jenkins, junior Devyn Turner and sophomores Mike Hawkins and Kayvion Sibley, as well as an offensive line that returns four starters from last season, all chipping into the effort.

Jenkins was at the forefront with his 200-plus-yard blitzkrieg, logging rushing touchdowns of 34, 15 and 90 yards on the night — doing his damage on just nine carries for good measure.

Turner found the end zone in the first quarter on a 25-yard run and Sibley punctuated drives with scores of 5 and 1 yards. Hawkins, making his first start behind center, passed for 204 yards and a touchdown, and managed 41 yards on the ground.

“We were going to come in running the football and take some shots at time,” Morris said. “But credit coach (Joey) McCullough and his group. They played hard. That’s a good football team over there and their running back is the real deal.”

Jenkins, however, wasn’t alone in eclipsing the 200-yard mark on the ground. East senior Ismail Mahdi fueled a game effort by the Panthers to begin Friday’s contest. The Panthers mustered 269 yards in the first half, finding the end zone on three of their first four series to pull within 21-20 with 6:44 left in the second quarter. East produced its share of big plays in between, including a 72-yard touchdown run by Mahdi and a 61-yard touchdown pass from sophomore Drew DeVillier to junior Rushil Patel.

“We did a lot of good things,” McCullough said. “We’re a young football team and that’s plenty to clean up, but that’s a good football team over there. I didn’t like having to burn some timeouts early on and those last five minutes of the half is the kind of thing you’re always concerned about with how quickly they can score.”

Mahdi finished the ballgame with 233 rushing yards and a touchdown on 7.8 yards per carry. DeViller’s first start behind center netted 244 passing yards and two touchdowns.

“[Mahdi] lost his mom on the first day of padded practice last year in the spring,” McCullough said. “To overcome that and see the work that he has put in, you can tell his strength. That’s why he’s one of our captains — it’s not just because he’s a great athlete, he’s a great kid.”

The Panthers had a tougher go sustaining that firepower as Friday’s contest wore on. Trailing 35-20 at the halftime, East was shut out in the third quarter — muffing a kick to begin the half and then succumbing to a goal-line stand by the Allen defense with 6:09 left in the third quarter where Mahdi was devoured for losses of yardage on consecutive runs near the end zone.

“I think the momentum change was when [junior David Hicks Jr.] made a sack right before the half,” Morris said. “That lifted us up a bit. You could tell they were playing with big eyes and were a little star-struck. They’re still kids so that’s to be expected.”

The Eagles return to action at 7 p.m. Friday when a home outing against Atascocita, while East welcomes Lake Highlands that same time from Kimbrough Stadium.

“I saw a lot of good things out of our young quarterback and [Mahdi],” McCullough said. “I thought our kids played hard. I thought their attitude and everything they’re doing matched their character. They gave it everything they had tonight.”