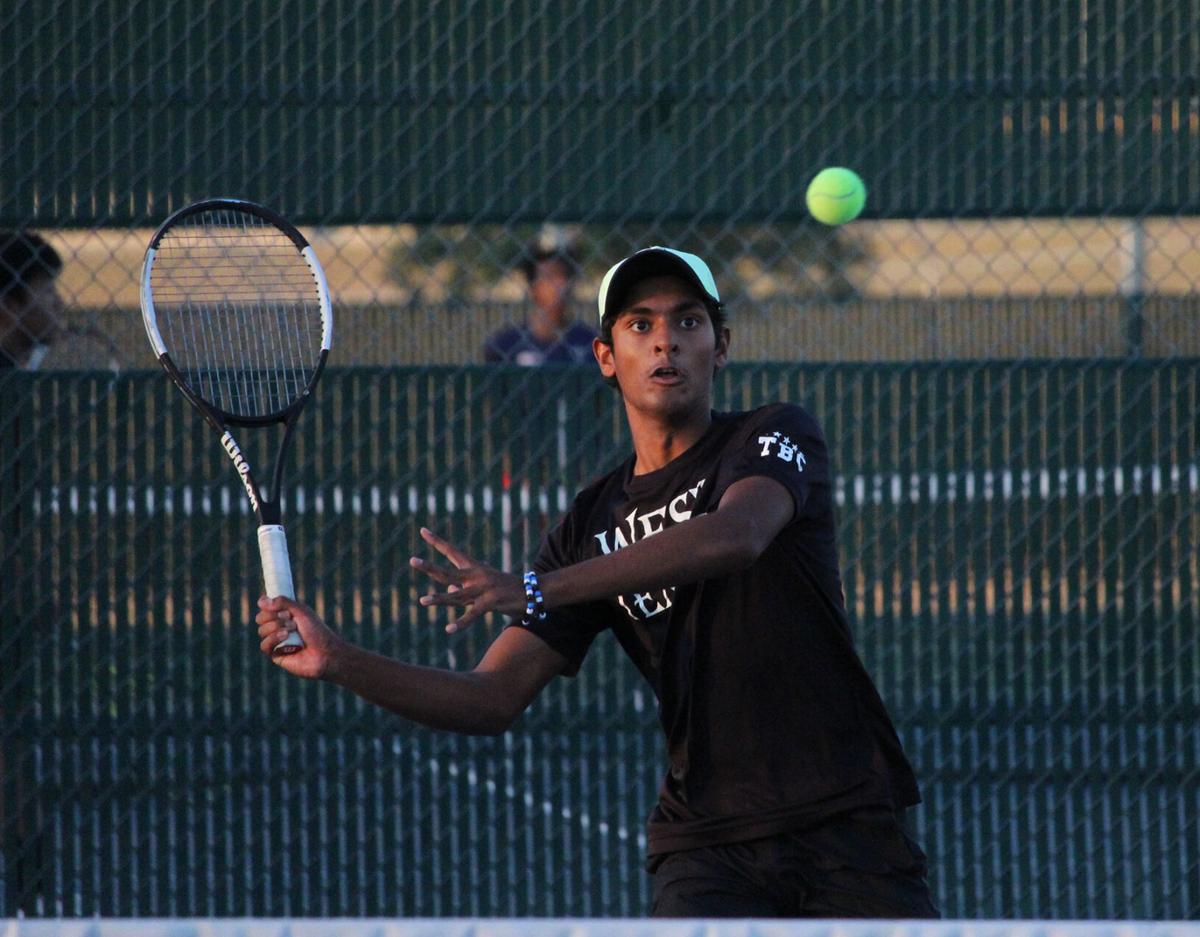 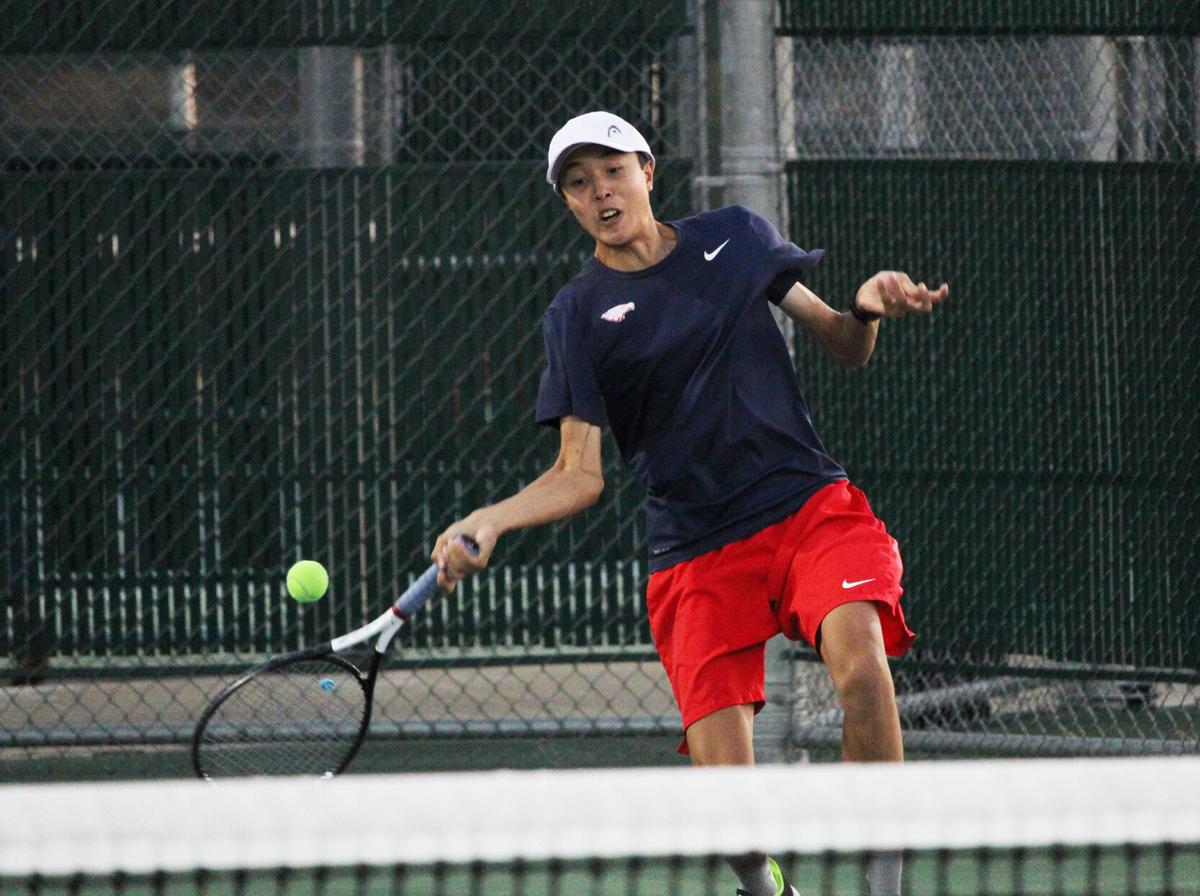 Allen’s tennis team had its season come to an end in Tuesday’s 11-1 loss to Plano West in the regional quarterfinals.

Allen’s tennis team had its season come to an end in Tuesday’s 11-1 loss to Plano West in the regional quarterfinals.

FRISCO — Despite being Region I-6A’s top two ranked teams, Plano West and Allen renewed their rivalry on the tennis courts in just the third round of the postseason on Tuesday.

Although one digit separated the Wolves and Eagles in the midseason regional rankings from the Texas Tennis Coaches Association, Tuesday’s regional quarterfinal left a bit more distance as West rode a commanding edge in doubles play to an 11-1 victory at Lebanon Trail High School.

With the win, the Wolves — ranked No. 3 overall in Class 6A — will continue their postseason Friday against No. 17 Keller at a time to be determined at Flower Mound.

The Wolves set the tone early, dispatching of the Eagles in straight sets for all six matches in boys doubles and girls doubles — of the 12 total sets played, West won at either 6-0 or 6-1 in six of them. That helped West build a 6-0 lead before Allen junior Braeden Barnes and freshman Chelsie Son notched what would be the team’s lone dent in the win column after taking mixed doubles.

“I felt like we kept our focus and intensity from start to finish. I was hoping we could pull out that mixed doubles match. We had 5-3 in the first set with two set points,” said Morgen Walker, West head coach. “It was disappointing to let that one get away, but it wasn’t because we weren’t playing hard. They fought hard to the end and singles took care of business.”

Tuesday’s win marked West’s second over Allen this season, besting its former district foe in preseason action on Sept. 11 with a 17-2 victory. The Eagles had to shuffle the deck for the postseason rematch, however, with their top boys player, sophomore Tejas Ram, not in the lineup due to COVID-19-related circumstances. Head coach Justin Quest noted that Ram did not test positive for the virus.

“Tejas is obviously an integral part of the lineup,” Quest said. “A lot of it is puzzle pieces, especially with a top player. Any time that’s out of the mix, it moves a lot of those pieces around and it’s often not in great directions. You have to get creative, but there’s just so much firepower on the other end.”

The Wolves, undefeated this deep into the season for the first time in Walker’s two-decade-plus tenure with the program, were just too much. Scribner and Goduri teamed up to win the No. 1 boys doubles line (6-1, 6-2), while sophomore Kishan Kersten and junior Purushotham Koduri (6-4, 6-3), and Reddy and freshman Kevin Xie (6-2, 6-2) followed suit on the Nos. 2 and 3 lines.

“They’re loving it. They’re enjoying being a part of this and they’re having a blast. They’re performing great, too. It’s been a lot of fun,” Walker said.

Tuesday marked the second straight year the Wolves and Eagles, who competed in separate districts for the first time ever, met in the postseason. Last year, the two state-ranked rivals squared off four times, with West taking three of those meetings — including a 10-4 win in the regional finals en route to an eventual runner-up finish at the Class 6A state tournament.

“There’s no secrets there. Justin and I still talk all the time,” Walker said. “I look at him like a brother. I wish we could have played a little later in the playoffs, but it is what it is and this is what the draw was. We had to line up and play and fortunately we came out on top.”

Quest, meanwhile, saw his team’s season come to an end after an 18-2 campaign that included the team’s first district championship under their longtime head coach. Quest hopes Tuesday provided valuable experience to a team that only played five seniors in its lineup against West.

“Even though it stopped after they won 10 matches, we felt like there were some others on the court that could have gone our way,” Quest said. “We’ll never know, and across 19 matches maybe things look different, so it’s good for these kids to know they were up in certain matches. We had some good points in there and with the adversity we had, I was proud of how they fought in singles.”