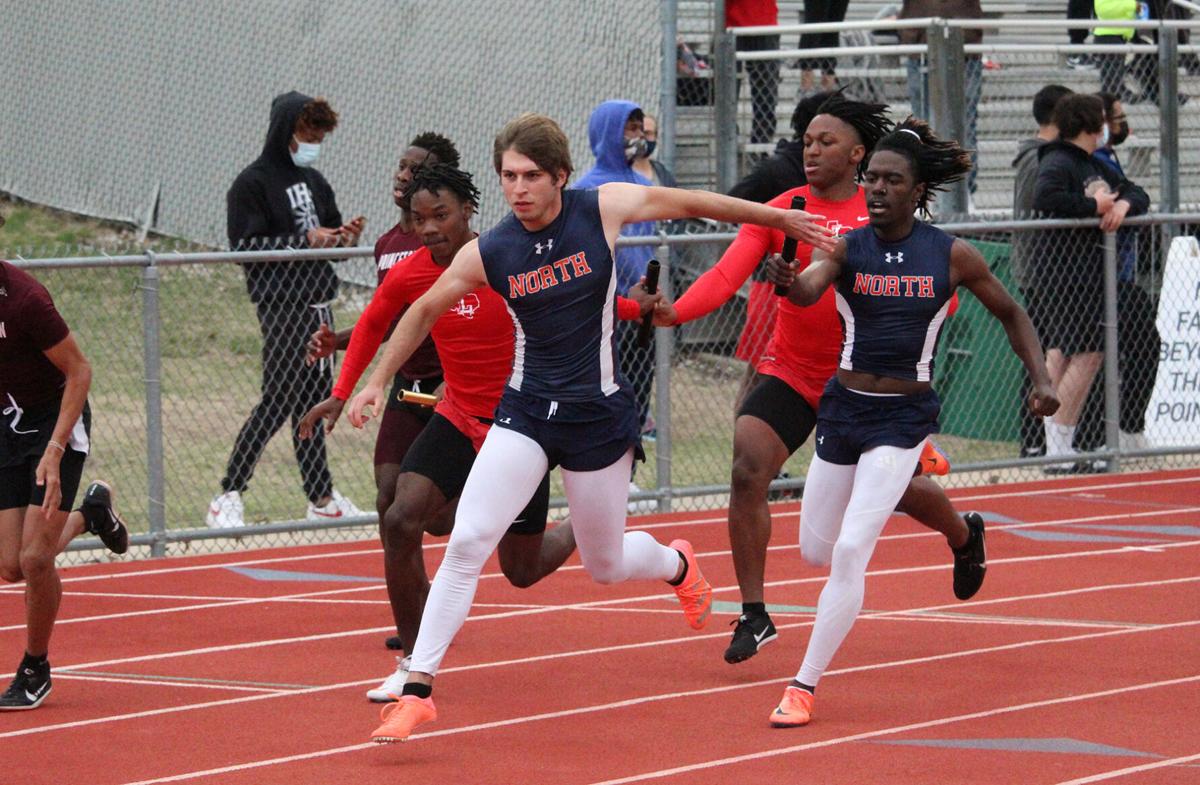 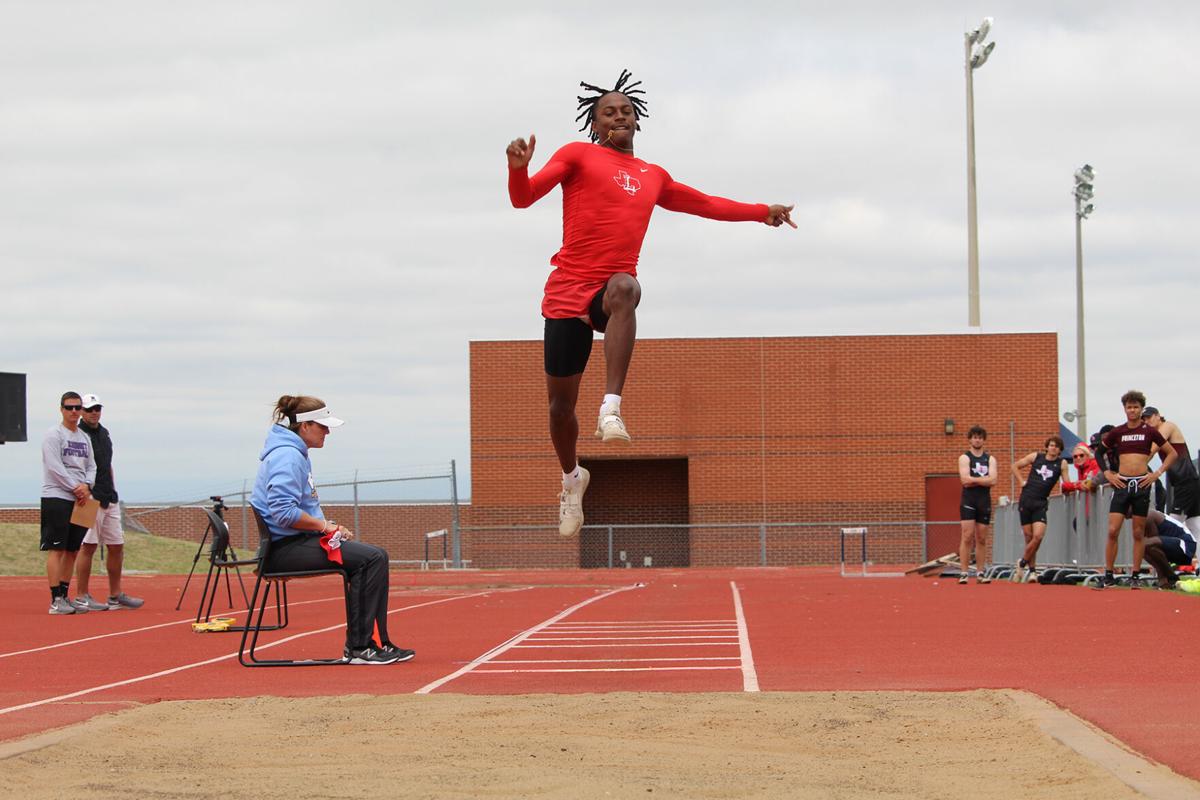 FRISCO — The McKinney North boys and girls track and field teams, as well as the Frisco Heritage girls and Frisco Liberty boys, all entered Wednesday’s 9/10-5A area meet looking to build off title wins at their respective district meets.

All four programs shined through Wednesday’s festivities from Frisco ISD Memorial Stadium, but only the North boys and Heritage girls managed to continue their string of postseason team championships.

The Lady Coyotes, a second-place finisher at this same meet the past two postseasons, got over the hump by out-pacing the North girls 98-88 for first place in the team standings. The Bulldogs, meanwhile, held off Liberty 114-101 to capture the top spot in the boys meet.

“When you have a talented program like Liberty has, you know nothing will come easy,” said Melvin Crosby, North boys head coach. “It was a dog fight all the way to the end. I was glad to see that our kids stayed focused and steady and kept their eyes on the goal. It’s one meet at a time for us and they were all out competing for the top four.”

The top four finishers in each event qualified for the Region II-5A meet, scheduled for April 23-24 at The University of Texas at Arlington. The litany of Frisco ISD programs, as well as teams at North, The Colony, Lovejoy and Prosper Rock Hill, will all be represented at regionals after stout showings at Wednesday’s area meet.

That included a competitive sprint to the finish by the North and Liberty boys, who were separated by just nine points in the team standings heading into the 4x400-meter relay. The Bulldogs, despite being seeded fifth in the event, put an exclamation point on their night by winning the mile relay with a 3:21.87.

“That’s what epitomizes the mentality of this team of young men,” Crosby said. “Somehow or someway, they’ll grit the situation out in whatever event they feel they have to be competitive in. They went and willed that finish and I attribute that to them wanting to compete.”

Rico Paul, Darrell Rougeau, Camden Fields and John Guillory teamed up to win the mile relay — one of two first-place relays for the Bulldogs. The other came courtesy of Jacobi Balous, Rogueau, Jorge Torres and Myles Squalls in the 4x200 (1:27.86). Kody Blackwood, meanwhile, continued his torrid year in the hurdles by winning both the 110 (13.93) and 300 (37.89) races.

“To see a young man that has faced the adversity [Blackwood] has injury-wise and to have that determination and focus — we see it in practice but for it to transition to the meets the way it has, I commend Kody and his coach, coach (Akeem) Jackson,” Crosby said.

The Liberty boys, meanwhile, matched North with four first-place finishes, including three for Evan Stewart. The Redhawks’ star wide receiver was dominant on Wednesday with wins in the long jump (23-6), triple jump (47-9) and the 200 dash (21.62). Teammate Prince Ugoh won the discus throw (149-1).

Field events were key for the Heritage girls in their rise up the team standings as well. Kaitlyn Bradford led that effort with a personal-record triple jump of 39-3 1/2 as one of three gold medals won by the Lady Coyotes. Heritage’s 4x100 relay of Kirin Chacchia, Bradford, Charli Foreman and Brooke Freeman got the running finals started on a productive note by placing first (47.84), while Chacchia won the 300 hurdles (45.01).

It was enough for the Lady Coyotes to fend off a game effort from the North girls, who were paced by wins from Alexandra Harber in the pole vault (12-0) and the team of Cambori Watson, Gabrielle McPherson, Caitlin Coffie and Nakaila Birdine in the 4x200 relay (1:40.83).

One spot behind in both the boys and girls team standings was Lovejoy, which racked up gold medals in five events. Three belonged to Kailey Littlefield, who turned in one of the meet’s most lopsided performances after winning the 800 by eight seconds with a 2:12.49. She later mounted a furious rally to overtake Reedy’s Colleen Stegmann and win the 1,600 with a 5:02.45 and teamed with Chloe Schaeffer, Bella Landrum and Amy Morefield to win the 4x400 relay (3:58.02).

Lovejoy's Kailey Littlefield entered the 800 with the fastest seed time by more than 11 seconds. The freshman impresses once again with a lopsided first-place finish at the 9/10-5A area meet. pic.twitter.com/9OamM8BqbM

Barr nearly made it 2-for-2 in the 1,600 but was overtaken down the homestretch by Heritage’s Soham Patil (4:24.20). The Coyotes also placed first in the 4x100 relay with Jaxon Miller, Zavion Langrin, Carsten Brewer and Russell Meggie (42.62).

While Jeffries staked her claim as the fastest girls athlete between the two districts, Lebanon Trail’s Drew Donley did the same on the boys side after winning the 100 with a 10.41. Other first-place finishes in FISD included Lone Star’s Kelis Jules in the 100 hurdles (14.90) and Kailynn Jackson in the 400 (57.25), Independence’s Alauna Richardson in the discus throw (132-7) and Reggie Bush in the high jump (6-1), and Wakeland’s Hannah Pfiffer in the high jump (5-6).

“Just getting out of our district is tough. You see how close so many of these races are, not only in the sprints but the distance events,” Gaines said. “It’s a good thing for it to be as tough as it so we know what we’re up against when we go against some of the other schools in the area.”

Also in action was The Colony, which placed ninth on the boys side. The Cougars qualified three athletes for regionals, highlighted by a first-place run from Wesley Gibbs in the 800 (1:57.78). Prosper Rock Hill, which tallied fourth in the girls standings and sixth in the boys, totaled 11 qualifications for regionals, including a win from Gavin Hecke in the pole vault (13-0).