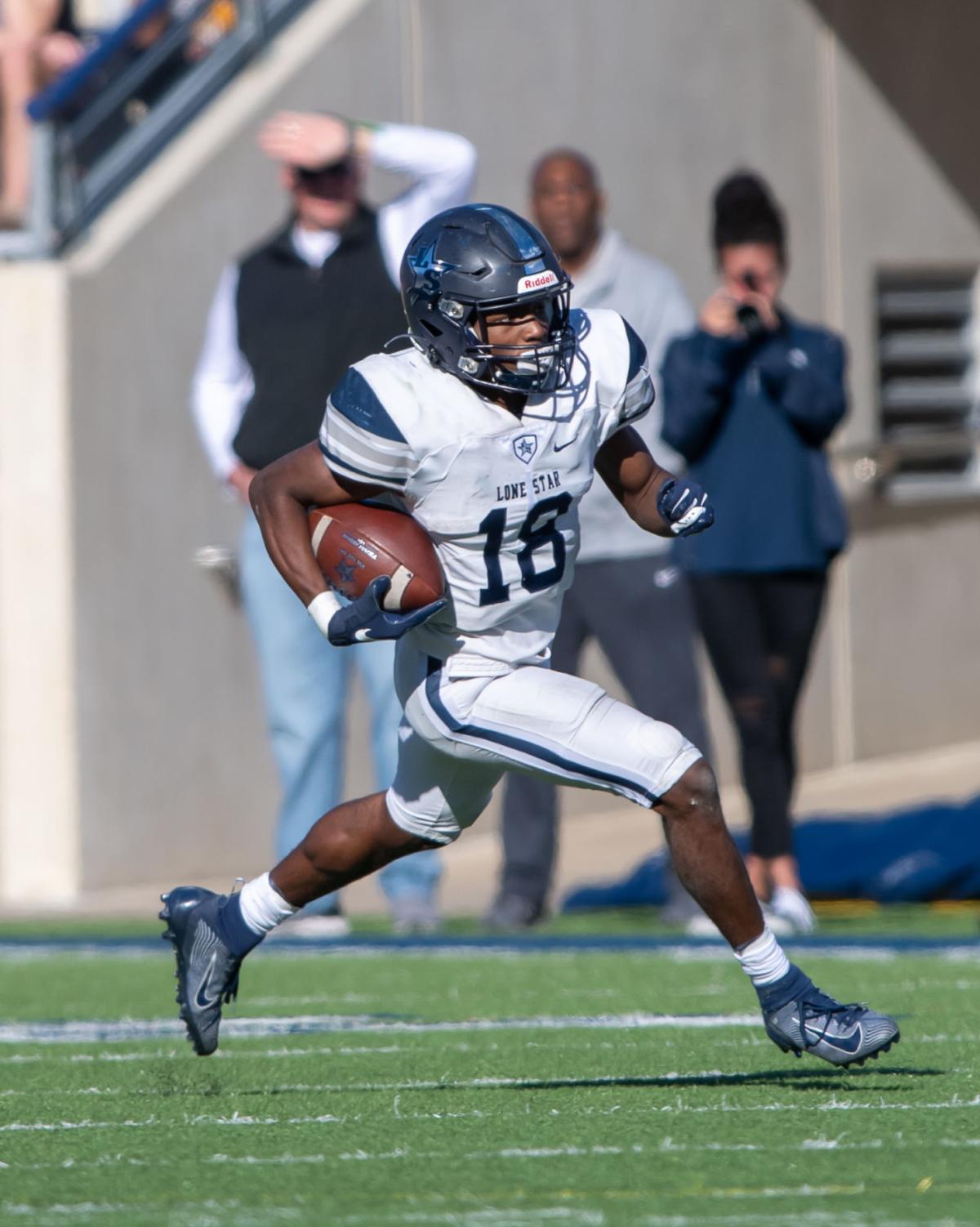 Frisco Lone Star’s Marvin Mims became the career leader in receiving yards in Texas high school football history, but it was not enough to overcome Denton Ryan, who went on to a 35-7 victory in a Class 5A Division I state semifinal game at Allen’s Eagle Stadium. 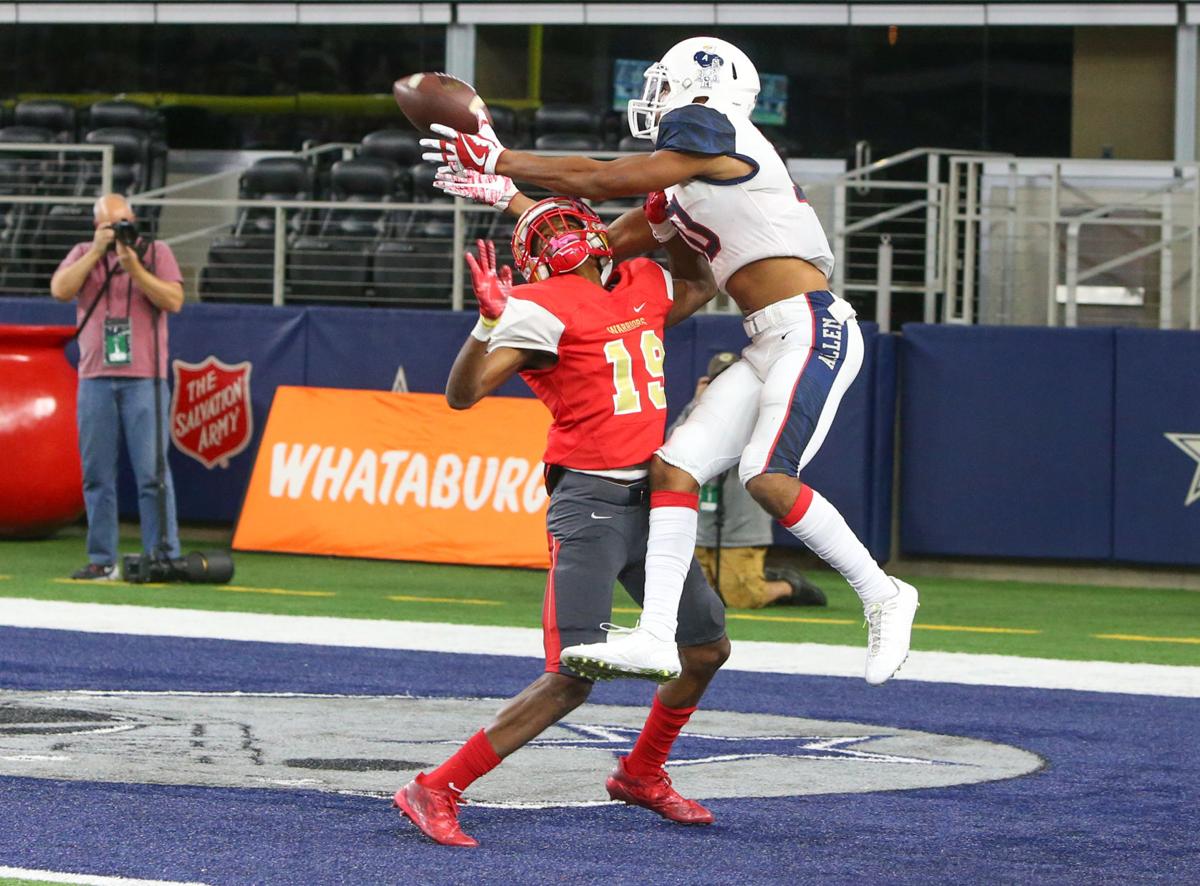 Allen junior Theo Wease leaps hauled in a 27-yard touchdown catch that triggered a 14-0 run by the Eagles to pull away from South Grand Prairie in Friday’s 28-14 area playoff win.

Frisco Lone Star’s Marvin Mims became the career leader in receiving yards in Texas high school football history, but it was not enough to overcome Denton Ryan, who went on to a 35-7 victory in a Class 5A Division I state semifinal game at Allen’s Eagle Stadium.

Allen junior Theo Wease leaps hauled in a 27-yard touchdown catch that triggered a 14-0 run by the Eagles to pull away from South Grand Prairie in Friday’s 28-14 area playoff win.

Throughout the summer, Star Local Media will recognize some of the premier football players from the Metroplex with its inaugural all-decade team. Players eligible for consideration must have played at least one season between 2010-19 for one of the high schools within Star Local Media’s coverage area: Allen, Carrollton, Celina, Coppell, Flower Mound, Frisco, Lake Cities, Lewisville, Little Elm, McKinney, Mesquite, Plano, Rowlett and The Colony. This is the third of a multi-part series, continuing with wide receivers.

Mims recently completed what is arguably the most prolific high school career for a wide receiver in Texas history.

After spending his freshman season at Frisco Legacy Christian, the Oklahoma signee burst onto the scene as a sophomore, catching 54 passes for 1,175 yards and 12 touchdowns as the Rangers posted a 12-2 record.

During his junior campaign, Mims continued to be one of the most productive wideouts in the state, hauling in 59 receptions for 1,158 yards and 14 scores and even adding a pair of touchdown passes as Lone Star put together a 10-3 season.

As impressive as those numbers are, Mims took his game to an entirely new level for his senior campaign. Mims was voted as the 5-5A Division I most valuable player as he recorded 117 receptions for 2,629 yards and 32 touchdowns and the Rangers posted a 14-1 record and advanced to the state semifinals.

Allen hasn’t lacked in elite receiver talent over the past decade, and Wease is as good as any to pass through the program.

Carving out a starting role as just a sophomore, Wease developed into one of the top prospects in the country by the end of his high school career. The sure-handed Wease hauled in 164 receptions over his three-year run, good for 2,342 yards and 38 touchdowns — all of which stack up among the very best in Allen’s history.

Like a fine wine, Wease’s production only improved with age. As a sophomore, despite playing just a complementary role, he still logged eight touchdown catches — tied for the top mark on the team — and held his own against elite competition, bagging 107 yards and two scores in the Eagles’ state semifinal loss to The Woodlands.

Taking the reins as Allen’s top pass-catcher as a junior, Wease elevated his production to 57 catches for 879 yards and 14 touchdowns, followed by a 72-reception, 1,042-yard, 16-touchdown swan song as a senior.

Able to pillage opposing defenses on routes both short and intermediate, while showcasing a knack for winning jump balls on fades and deep passes, Wease helped lead Allen to a state championship in 2017, was named to the all-state team twice, and graduated as arguably the top receiver in his class according to multiple recruiting outlets.

Prior to a standout run at Texas that led to his being selected in the third round of the 2020 NFL draft by Baltimore, Duvernay starred for the Mustangs on the gridiron from 2012-15.

A two-sport standout who won the state championship in the 100 meters as a junior, Duvernay proved he was the complete package on the gridiron, compiling 170 receptions for 2,921 yards and 36 touchdowns while adding 101 carries for 1,054 yards and 11 scores on the ground.

Duvernay was selected to the all-district first team in all three of his varsity seasons and was named first-team all-state as a senior.

Fuller rewrote the record books during his time as a Leopard, authoring a dominant three-year run that nearly resulted in 3,000 career receiving yards. Just 12 yards short of that mark at 2,988, Fuller eclipsed 1,100 yards each of his final two years in high school — highlighted by a 1,396-yard, 22-touchdown campaign as a junior.

A two-time all-state selection who capped his career with 40 touchdown catches, Fuller went on to amass a productive college career at Washington before signing with the Seattle Seahawks as an undrafted free agent in May.

Guyton’s spotlight first shined during the Eagles’ 2013 playoff run, breaking out as a deep threat for Kyler Murray that proved valuable in helping Allen repeat as Class 5A Division I state champions. In just that postseason, Guyton amassed an entire season’s worth of production — totaling 612 yards and 11 touchdowns in just six games — before solidifying his status as one of the state’s best in 2014 with 1,770 receiving yards and 22 touchdowns as Murray’s go-to target.

A multi-time state champion who earned all-state commendation as a senior, Guyton found success in college at North Texas before latching on with the Los Angeles Chargers.

The Hawks knew they had something special on their hands early on with Bridges, who scored double-digit touchdowns and tallied nearly 800 receiving yards as just a sophomore. Bridges’ production as a pass-catcher was nearly identical between his junior (62 catches, 843 yards, 13 touchdowns) and senior (58 catches, 844 yards, 13 touchdowns) years, but it was his versatility that shined big as a senior.

Deployed all over the field, Bridges took on a big role out of the backfield as well with 433 rushing and seven touchdowns — including numerous snaps taken as a wildcat quarterback. That versatility helped net Bridges district MVP and all-state honors as a senior, as he looks to author similar success at Oklahoma.

Price is the textbook definition of versatile.

The Colony lined the recent graduate up at wide receiver, running back, defensive back and a special teams returner, and all the Texas Tech signee did at each position was fill the stat sheet. As a senior, he led all Cougars in receiving yards (1,307) and receiving touchdowns (14) and was second in both rushing yards (311) and rushing touchdowns (six). He was named the District 5-5A Division I offensive player of the year and to the all-state second team.

Price turned heads with a stellar junior season in which he rushed for 661 yards on 62 carries with 11 touchdowns, caught a team-high 57 passes for 906 yards with 13 touchdowns. He was named the district's MVP and earned all-state honorable mention.