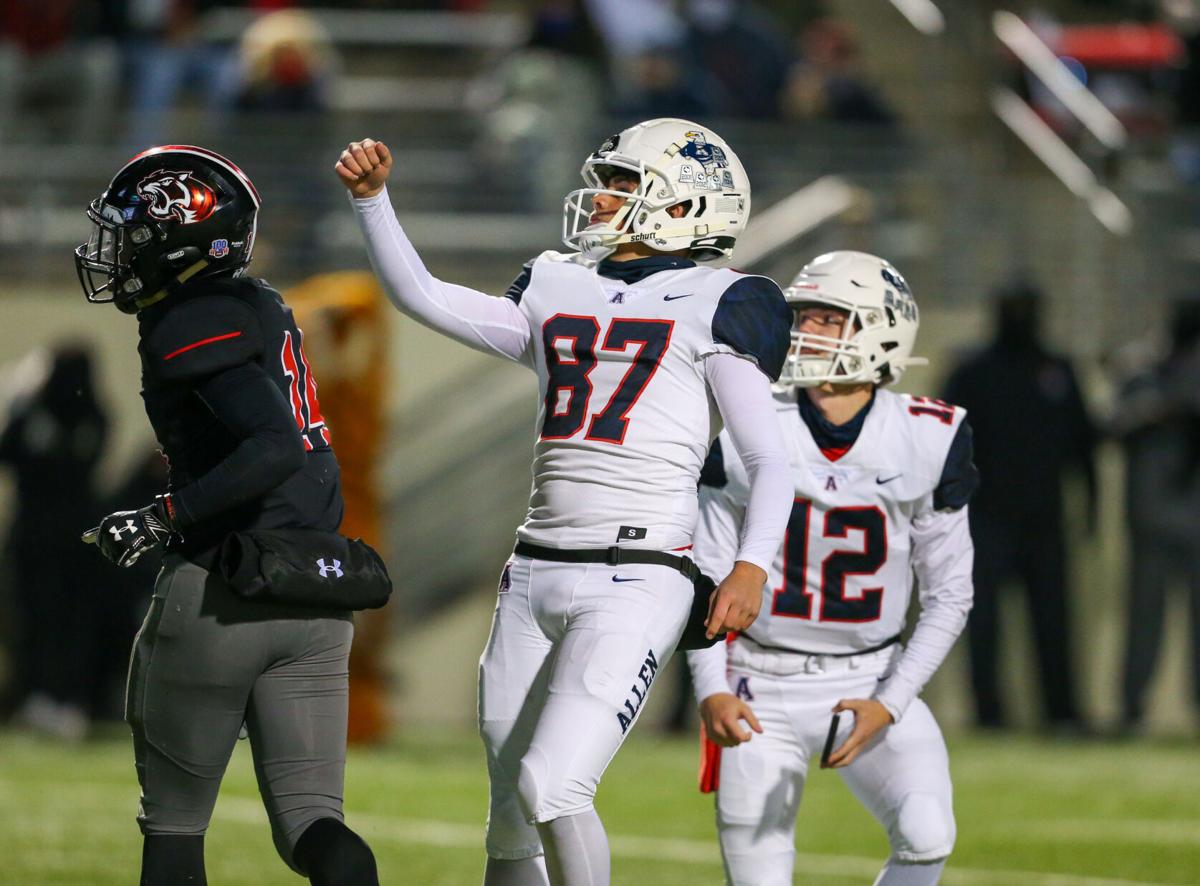 Allen's Caden Gilmore celebrates a made field goal during the Eagles' regular-season finale against Denton Braswell. 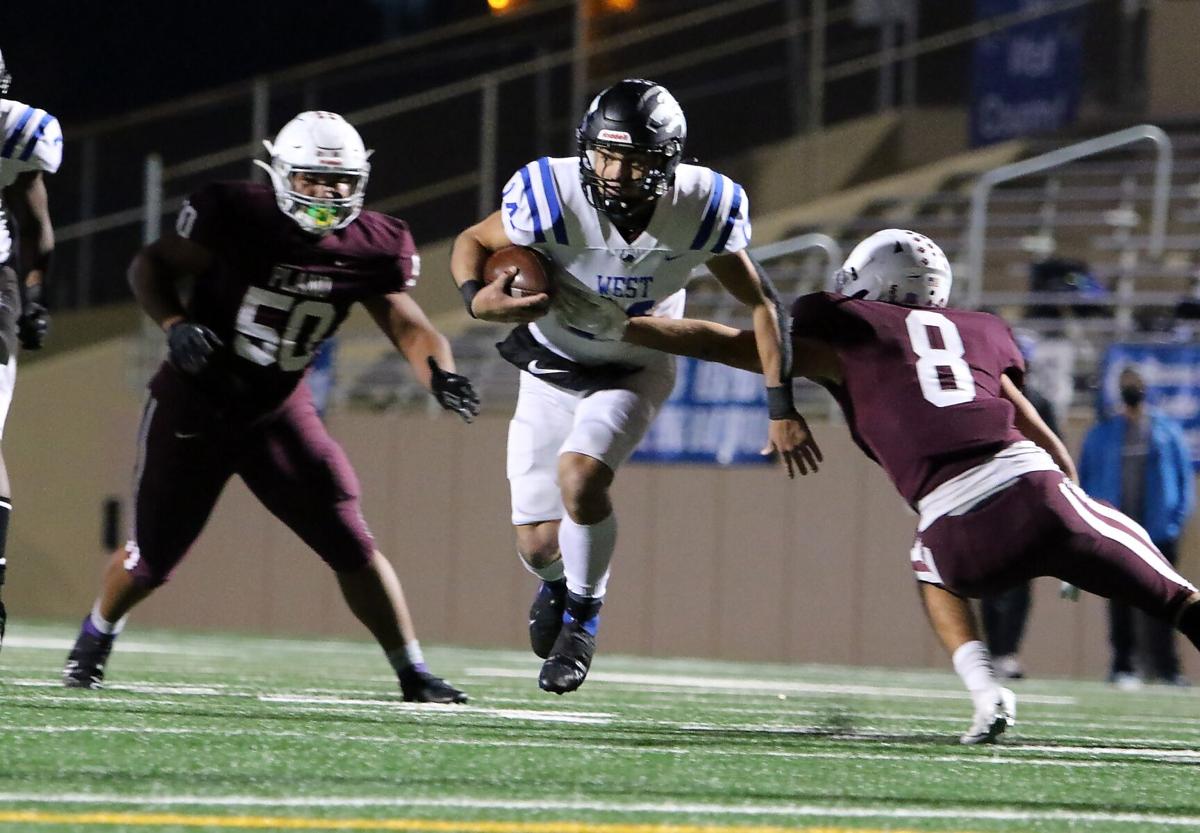 Allen's Caden Gilmore celebrates a made field goal during the Eagles' regular-season finale against Denton Braswell.

Despite playing in separate districts for the first time in more than two decades, Allen and Plano ISD can’t escape each other on the football field.

The Eagles opened their 2020 campaign with a 49-26 win over Plano East back in September and will begin the postseason against another former conference foe when they welcome Plano West to Eagle Stadium at 7 p.m. Friday in the bi-district round of the Class 6A Division I playoffs.

Allen enters the contest fresh off an eighth consecutive unbeaten regular season, sitting at 8-0 overall and carrying the state’s No. 4 ranking among 6A ball clubs.

West, meanwhile, has enjoyed a resurgent campaign under second-year head coach Tyler Soukup. The Wolves, not long removed from consecutive winless seasons and a 34-game losing streak, are back in the playoffs for the first time since 2014.

That swagger has paid off in the form of a 6-4 record — more wins than the program accrued over the previous five seasons combined. The Wolves have experience slowing high-powered offenses as well, keying the start of a 4-3 district campaign with a 27-17 victory over a Lewisville unit that has averaged 50.8 points per game since.

West will need to conjure a similar effort Friday against an Allen offense with every bit as much firepower. The Eagles’ per-game averages of 534.8 yards and 49.8 points per game rank second and fourth, respectively, in the area — marks forged by a unit that can score in bunches.

Senior running back Jordan Johnson enters the playoffs averaging more than 9.5 yards per game as part of an 898-yard campaign on the ground, while senior receiver Bryson and Blaine Green are fresh off a combined 14 catches for 266 yards and four touchdowns in Allen’s 59-35 win over Denton Braswell. Senior quarterback General Booty has 1,582 passing yards and 19 passing touchdowns to just four interceptions.

Between an opportunistic defense that stifled six fourth-down attempts by the Bengals, and a special teams unit that preys on swaying field position, Allen’s eight wins have come by an average of 22.3 points per game this season.

“The thing we’re doing well is that we’re having great practices every week,” Gambill said. “I think when you have really good practices that you have an opportunity to be successful on Friday nights.”

The Eagles can strike as fast as any offense in the state but operate at a far different measure than the Wolves. Much of West’s success against Lewisville stemmed from winning time of possession behind a ball control-centric offense that deploys a physical run game. Senior Tabren Yates and junior sophomore Dermot White share time in the backfield — a balance that exists at quarterback as well with senior Greg Draughn and sophomore Vance Feuerbacher sharing snaps in last week’s 31-24 win over Plano.

The Wolves can instill a grinding tempo and the Eagles should expect nothing less on Friday.

“They do a really good job of slowing the game down,” Gambill said. “They’re a run-first team and will try to lull you to sleep and take some shots with their play-action game. What we’ve got to do is take advantage of our opportunities.”

Gambill was just as complimentary of West’s strides on defense, praising the team’s linebacker corps for their tackling and pursuit of the football. Senior Jacob Stephens anchors that unit, a defense that surrendered just 21.8 points per game this season and includes three players (Stephens and seniors James Laprocido and Mansoor Ahmed) with at least five sacks on the year.

Friday’s game doubles as the first playoff meeting between Allen and a PISD school since 1997 when Plano East defeated the Eagles, 34-13. The two school districts, which currently comprise the four largest high schools in the state, shared the same conference from 1998 up until 2020.

Gambill, like many others in the two communities, was surprised at the UIL’s decision so split up Allen and PISD during February’s biennial realignment, but the Eagles will nonetheless get meetings with two of the three Plano schools during the 2020 season.

“We got to play Plano East and now Plano West. I think it’s good for our programs and communities that we still get to play each other. I’ve got a lot of respect for Plano ISD,” Gambill said.

Allen was won its past 15 meetings against Plano West. The Wolves’ last victory over the powerhouse Eagles came in 2004 in a 24-17 district ballgame.