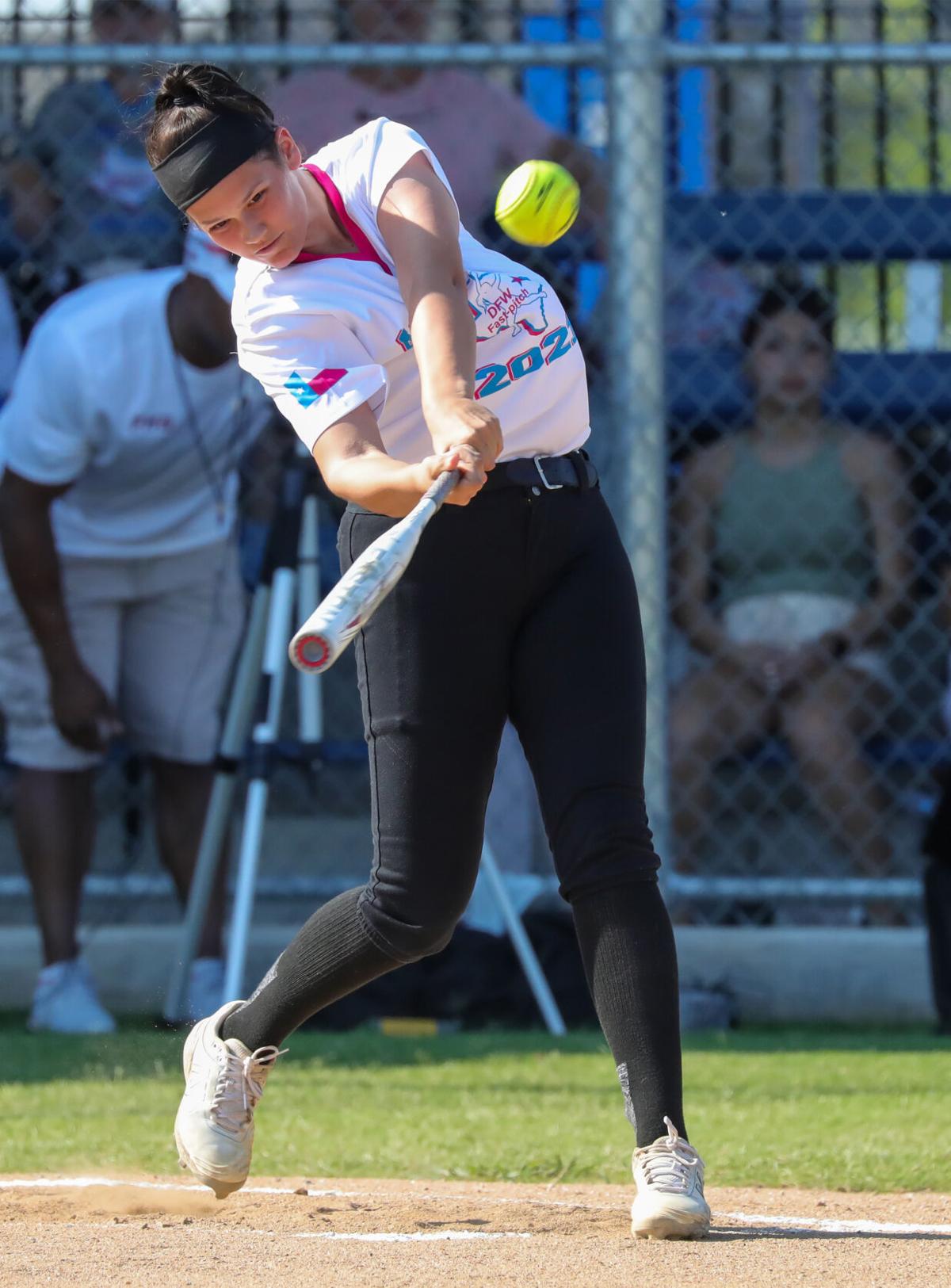 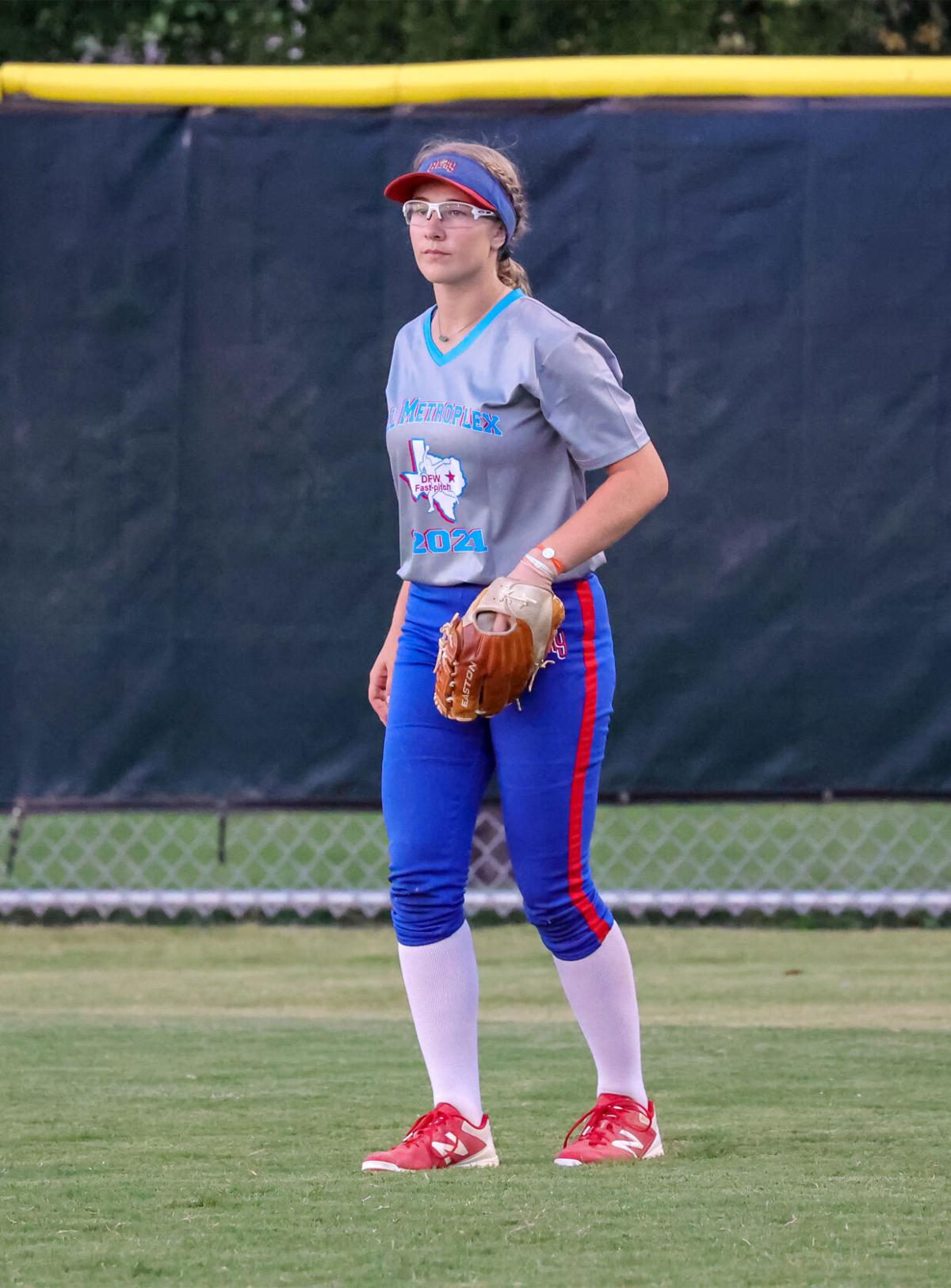 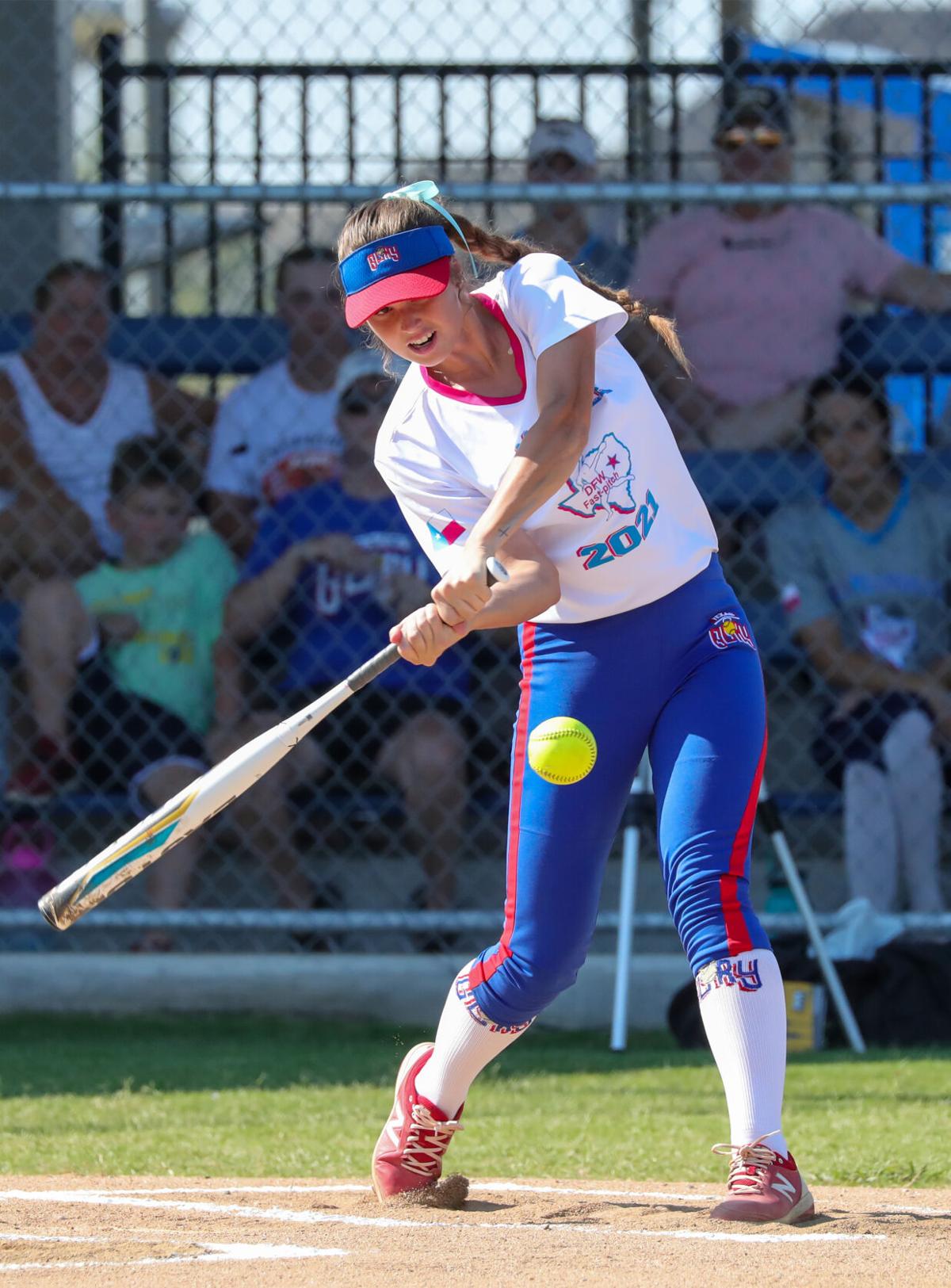 Prosper junior Elizabeth Moffitt competes in the home-run derby at the DFW FastPitch All-Star Game at Warren Sports Complex on Tuesday. Moffitt has been named the DFW FastPitch Player of the Year for the 2021 season. 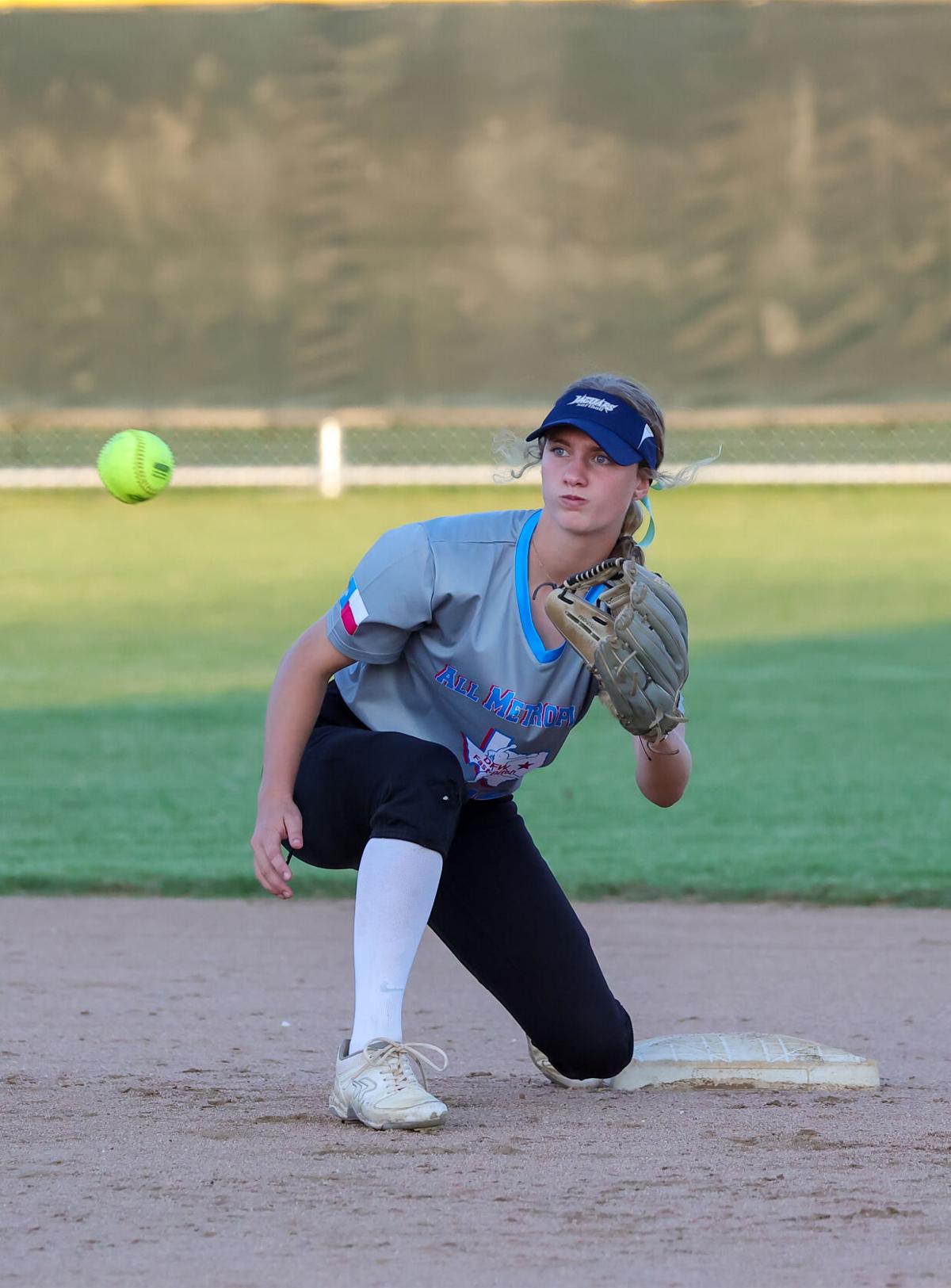 Flower Mound's McKenna Andrews is in position to catch the ball during the DFW FastPitch All-Star Game on Tuesday.

Prosper junior Elizabeth Moffitt competes in the home-run derby at the DFW FastPitch All-Star Game at Warren Sports Complex on Tuesday. Moffitt has been named the DFW FastPitch Player of the Year for the 2021 season.

Flower Mound's McKenna Andrews is in position to catch the ball during the DFW FastPitch All-Star Game on Tuesday.

FRISCO – Despite seeing two of her own players in the opposing dugout, Prosper Rock Hill head softball coach Leigh Ann Budd wanted to soak in the experience.

So, every time that Blue Hawk junior Kat Luna and sophomore Jolie Malan stepped into the batter’s box on Tuesday night, Budd remained silent. There was no strategy involved. There were no competitive juices flowing.

Sure, Luna and Malan were playing for Team Fort Worth Brewer – the team opposing the one that Budd was coaching – but this game was just an exhibition.

All that Budd wanted to do was to watch the two star players from the high school team that she coaches have fun. Luna and Malan were several high school softball players from the area that were selected to compete in the DFW FastPitch All-Metroplex All-Star Game at Warren Sports Complex.

“It’s great,” said Budd, who guided the Blue Hawks to the District 10-5A title and an appearance in the Region 2-5A semifinals in Rock Hill’s inaugural season as a varsity program. “You have studs all around you, so you can just kind of enjoy the game. We were all just having fun.”

In fact, the game in which Budd coached was full of representation from Prosper ISD. Prosper juniors Sydney Lewis, Gabby Coffey, Elizabeth Moffitt and Ayden Allen were on the same team as Budd. Coffey made her presence known. The Mississippi State pledge and the DFW Fastpitch junior of the year hit a solo home run over the outfield wall. Allen added a run-scoring single.

Moffitt, a Fresno State commit who was recently selected as the DFW Fastpitch player of the year, said that she enjoyed the experience of being on the same team as her high school teammates despite the game-time temperature reaching 95 degrees.

“It was just crazy because there are so many good people in our district,” she said. “It was a big deal for me. It was cool.”

Moffitt is one of four players from the Star Local Media coverage area that were superlative winners on the DFW Fastpitch all-Metroplex team, joining Coffey, pitcher of the year Alexis Telford of Allen and sophomore Player of the year Logan Halleman of Flower Mound. Each of the award winners on that list played on Tuesday in Frisco.

Telford, a Stephen F. Austin commit, showed her arsenal of pitches in front of her high school coach.

First-year Allen head coach Kathy Schoettle combined with the staff from Justin Northwest to coach a squad that included Telford and Allen teammate Chloe Schimmel. Schoettle led the Lady Eagles to their first district title and playoff run of three rounds since 2004.

“It’s always fun to come out here and do this,” Schoettle said. “You have some of the best in the Metroplex that you’re playing. It’s good to get to know them on a different level instead of coaching against them. We had a couple of Allen girls competing against each other. So, it was like, ‘Who do you cheer for here?’ But, we just wanted to come out here and have fun.”

Backstopping Telford was Lake Dallas junior catcher Shelby Nelson. Nelson actually started the game in right field, but was moved back to her natural position a few innings later. Offensively, she hit a double off the outfield wall.

Nelson was also a participant in the home-run derby, which kicked off the festivities on Tuesday. Pitching to her was Lake Dallas head coach Amber Britton. Nelson hit 10 home runs this season for the Lady Falcons.

“It was a little hot today, but the home-run derby was something fun to do,” Nelson said. “It was a good warm-up because we didn’t get to hit before the game. And they stuck me in right field, which I had never played before. But I just did what the coach wanted me to do.”

Joining Nelson in the home-run derby was McKinney Boyd freshman catcher/utility Savanna Luther. Luther made it all the way to the semifinals, where she hit three home runs during that round. Aledo junior Macy Graf won the derby.

The all-star game marked the end to an exhilarating spring season for Flower Mound junior McKenna Andrews and her Lady Jaguar teammate, Halleman.

“I got a couple of days off and then went right into select ball,” Andrews said. “It was like I had never missed a beat. It was really good to be out here. I will forever look back on this year. It’s just been unforgettable. It’s incredible to get on that run and make history for Flower Mound.”

Prior to the start of the games, Texas Glory head coach Kevin Shelton announced the winners of the Tracy Beard scholarships – a list that included Hebron’s Rylee Nicholson and Frisco Reedy’s Makayla Cox.