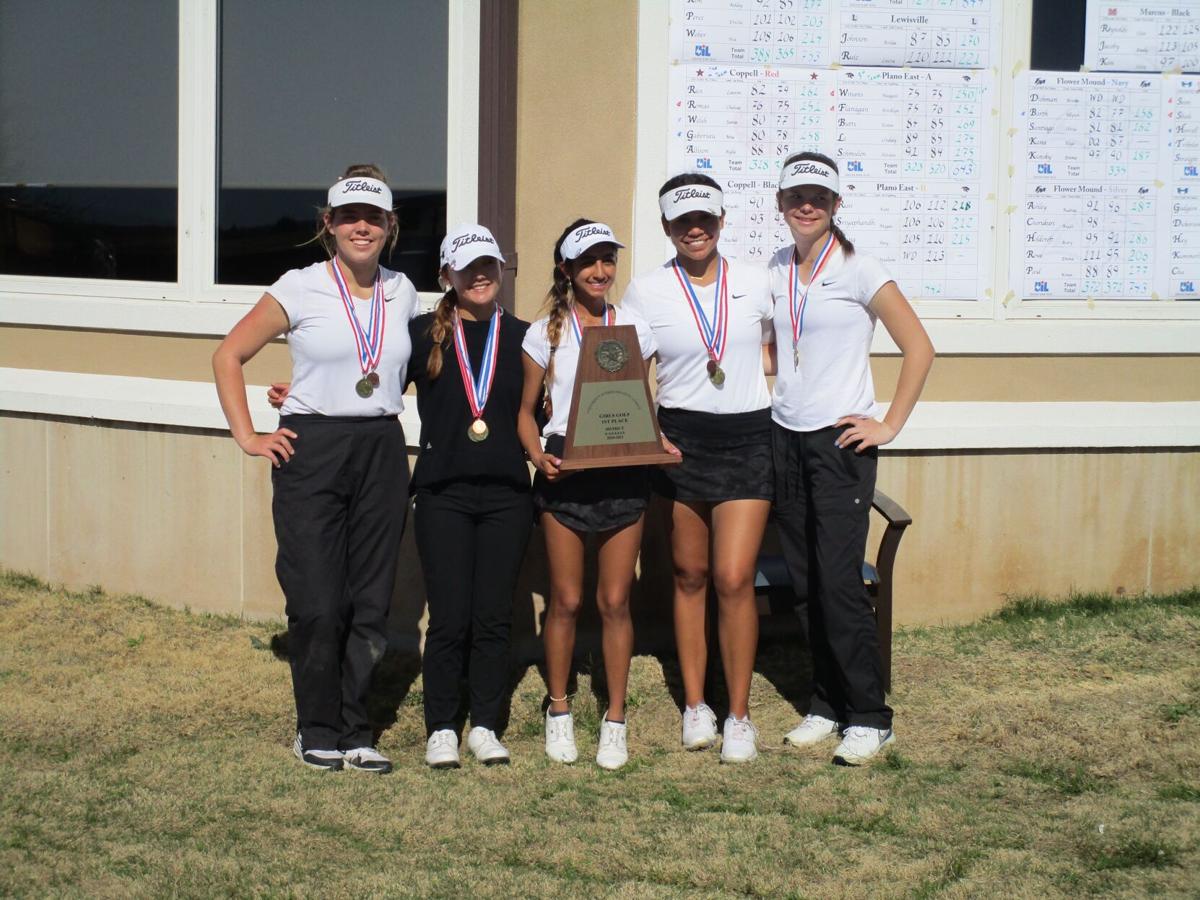 The Hebron girls golf team poses for pictures with the first-place plaque at the District 6-6A tournament Tuesday in The Colony. 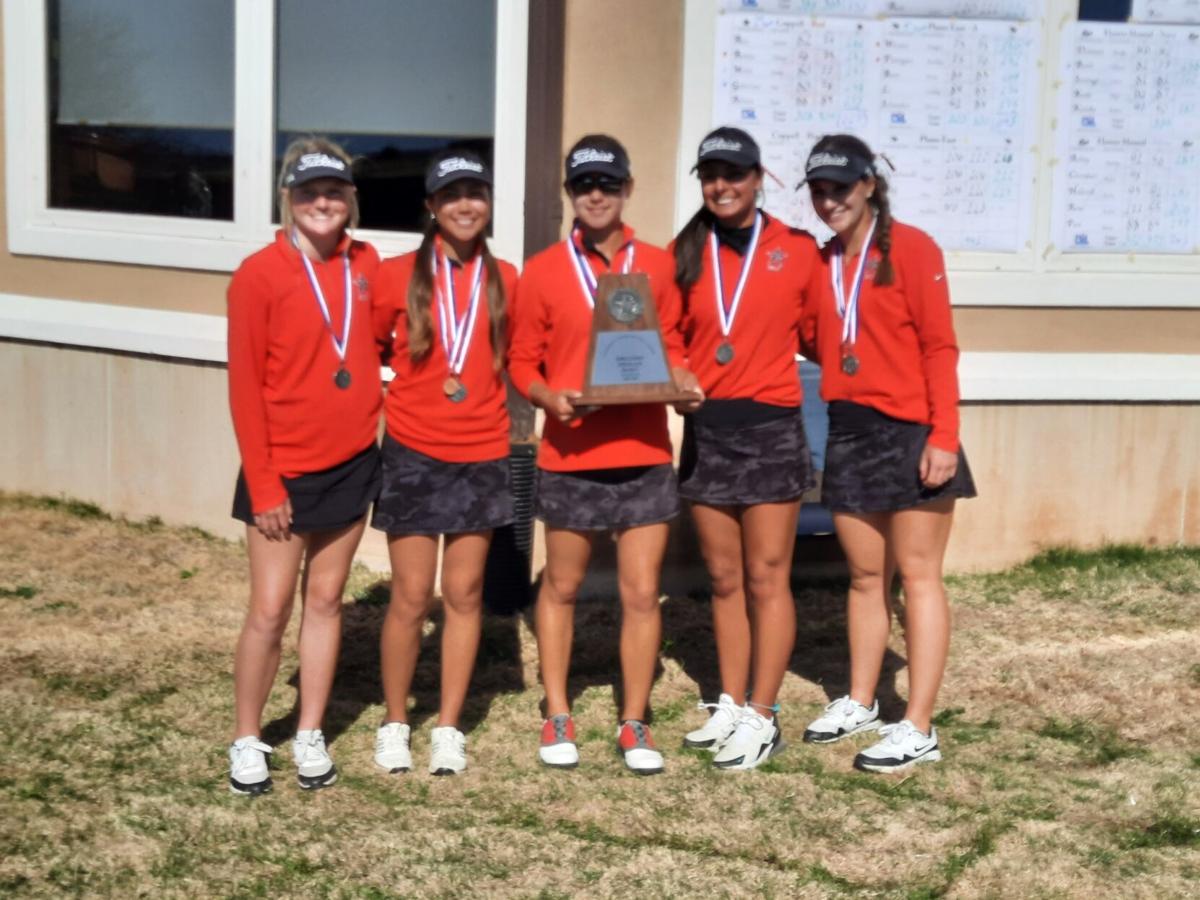 The Coppell girls golf team poses for pictures with the District 6-6A runner-up plaque Tuesday at The Tribute at The Colony Golf Club. 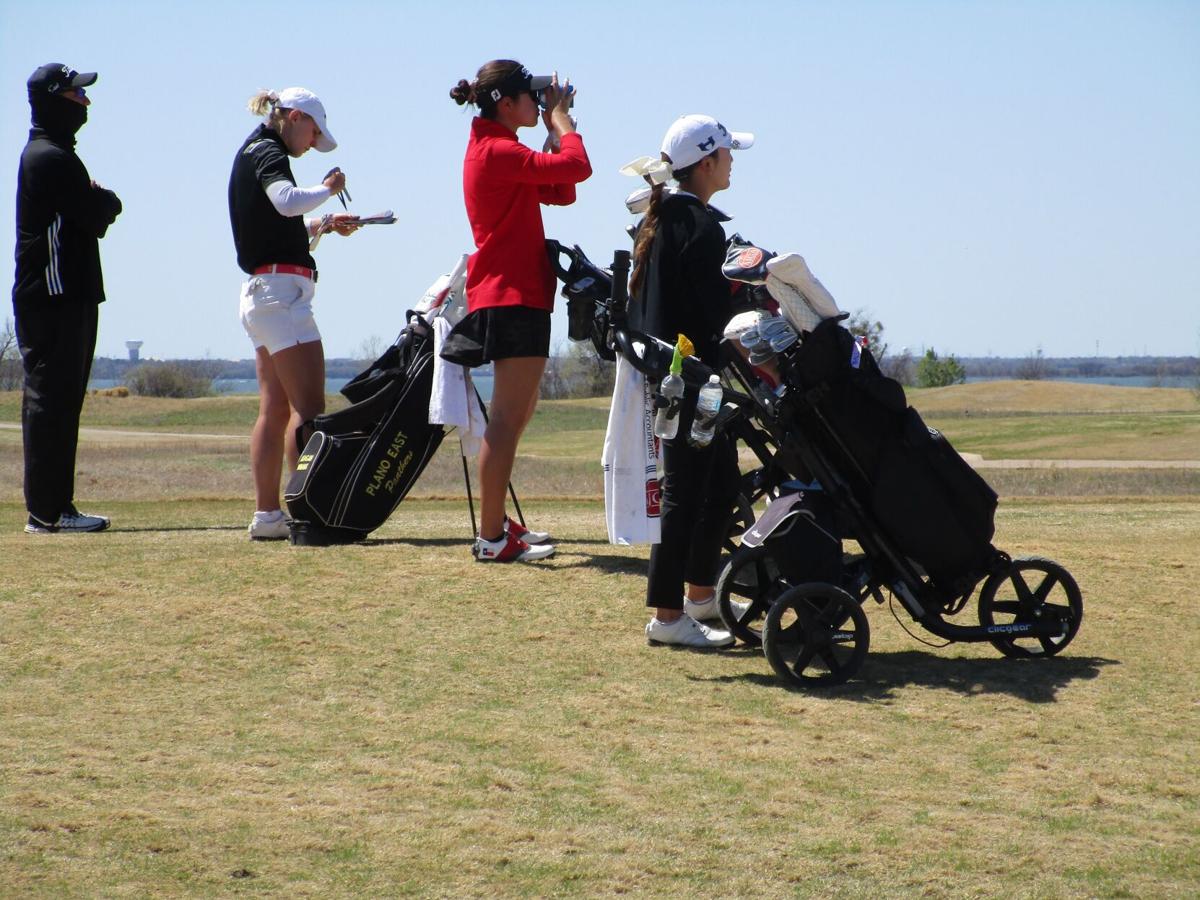 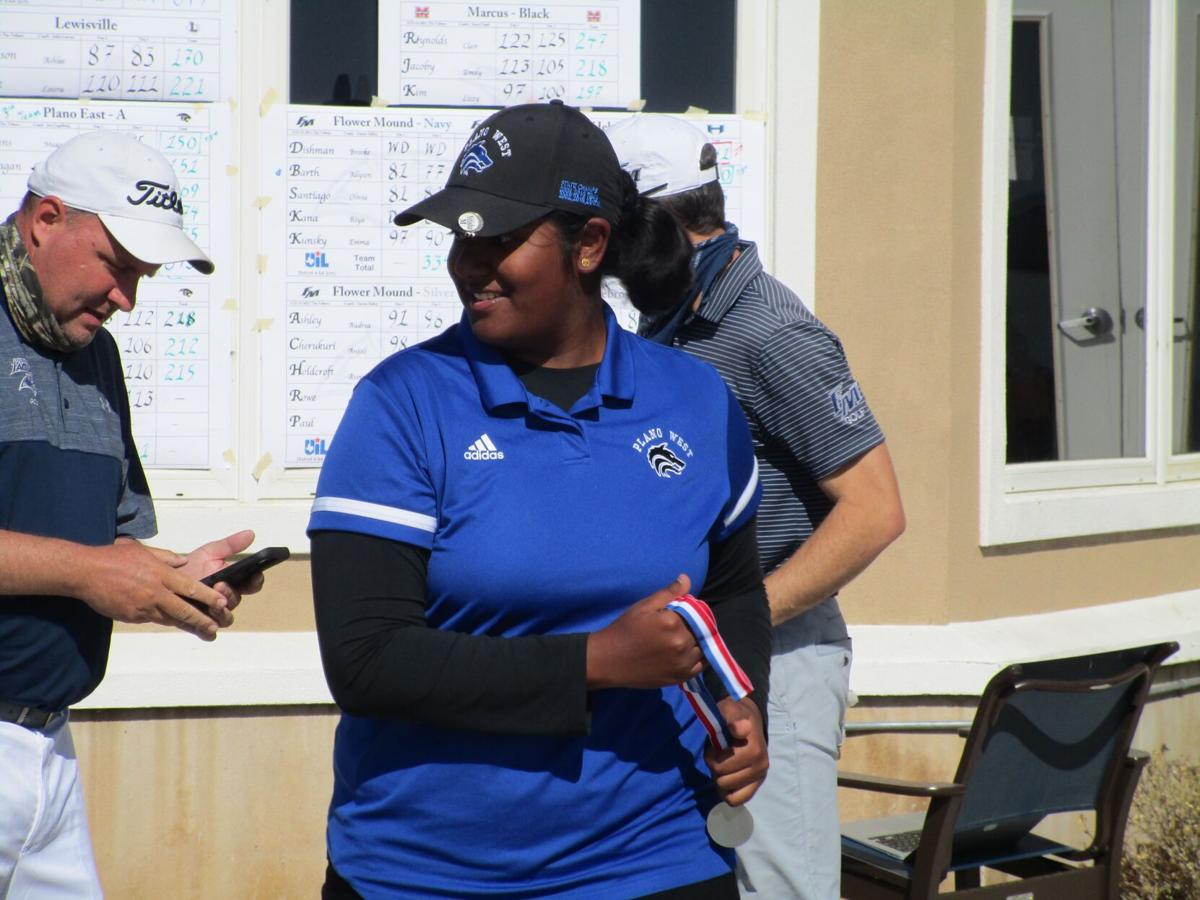 Plano West's Nitisha Manikandesh placed second in the District 6-6A girls golf tournament, which automatically qualified her for the Region 1 tournament.

The Hebron girls golf team poses for pictures with the first-place plaque at the District 6-6A tournament Tuesday in The Colony.

The Coppell girls golf team poses for pictures with the District 6-6A runner-up plaque Tuesday at The Tribute at The Colony Golf Club.

Plano West's Nitisha Manikandesh placed second in the District 6-6A girls golf tournament, which automatically qualified her for the Region 1 tournament.

THE COLONY — Even before Estelle Seon transferred from Byron Nelson to Hebron last year, she knew that the Lady Hawks had a good girls golf team. But, even she was awe struck by the scores that Hebron posted at the District 6-6A tournament.

Despite playing in windy and rainy conditions Monday at The Tribute at The Colony Golf Club, the Lady Hawks took a 13-stroke lead after day one of the two-day tournament and never looked back. Posting scores of 305 and 298 for a two-day total of 603, Hebron captured the team title by 24 strokes over runner-up Coppell. The Cowgirls, like Hebron, qualified for the Region 1 tournament.

“This team has been amazing, kind of resilient all year, working on individually each of their games and working together as a team,” said Mercedes Trent, Hebron head coach. “Kind of like with Coppell. We’ve been going back and forth with them all season. But these last couple of weeks, we’ve really taken it up in practice to make sure that we can take it to another level. It’s just a culmination of all the girls’ hard work. To be able to come out here in districts, we not only won, but kind of make a statement going into regionals.”

Hebron also doubled as the individual champion, with Seon posting scores of 71 and 70 for a winning score of 141. She finished at 3-under par. Seon had bogeys on three of the first five holes but only had three such occurrences on the final 31 holes.

Seon was one of four Hebron golfers that placed in the top 10. Symran Shah (75-75) was fourth overall, Morgan Horrell (79-76) finished in seventh and Gracie Tribolet (80-77) tied for eighth.

“I didn’t know that I would shoot so low, because especially (Monday), I was surprised that I shot 1-under, now 2-under today,” Seon said. “I’m proud of myself. I knew Symran and some of the other girls. But, I never knew that we would play like this as a team. I’m proud of all of them.”

Coppell also qualified its entire team for the regional tournament, with the Cowgirls shooting 318 on the first day and 309 on the second day for a two-day total of 627.

It was a close battle after Monday’s round.

The Cowgirls held just a five-stroke lead over Plano East for the final team spot for the regional tournament, but Coppell outscored the Lady Panthers by 11 strokes Tuesday to qualify for the next round of the postseason.

Lady Panther senior Meagan Winans, an Oklahoma pledge, earned one of two individual berths out of Plano ISD into the regional tournament. But, Winans needed more than 36 holes to decide her fate. She was tied with Hebron’s Shah for third place, and a playoff ensued.

Winans and Shah held their playoff on hole No. 1. Winans needed just three swings of the golf club to hit the ball into the cup, while Shah needed four. Winans' teammate, Brecklyn Flanagan, barely missed the cut for regionals after shooting scores of 75 and 76 for a 36-hole total of 151.

“(Winans) played pretty solid both days,” said Jon Engelking, Plano East head coach. “Obviously, the first day was tough. It was kind of the luck of the draw. The first group got to finish without the heavy, heavy rain. When Meagan was on No. 17, the rain was blowing sideways and the wind was just howling. But, that’s just how it went. It was just of the luck with the tee times. But, I’m proud of how Meagan and Brecklyn played both days.”

Plano West junior Nitisha Manikandesh will also represent PISD at the Region I-6A tournament, set for April 19-20 at Tangle Ridge Golf Club in Grand Prairie. Manikandesh didn’t need as many dramatics. She logged rounds of 72 and 75 to clinch second place in 6-6A.

Flower Mound and Marcus were also represented at the district tournament. The Lady Marauders placed seventh overall with a team score of 737 – their top finish came courtesy of Kamri Gabel in 14th place (163). The Lady Jaguars earned eighth overall with a score of 743. Allyson Barth shot 158, finishing in a tie for 10th place.