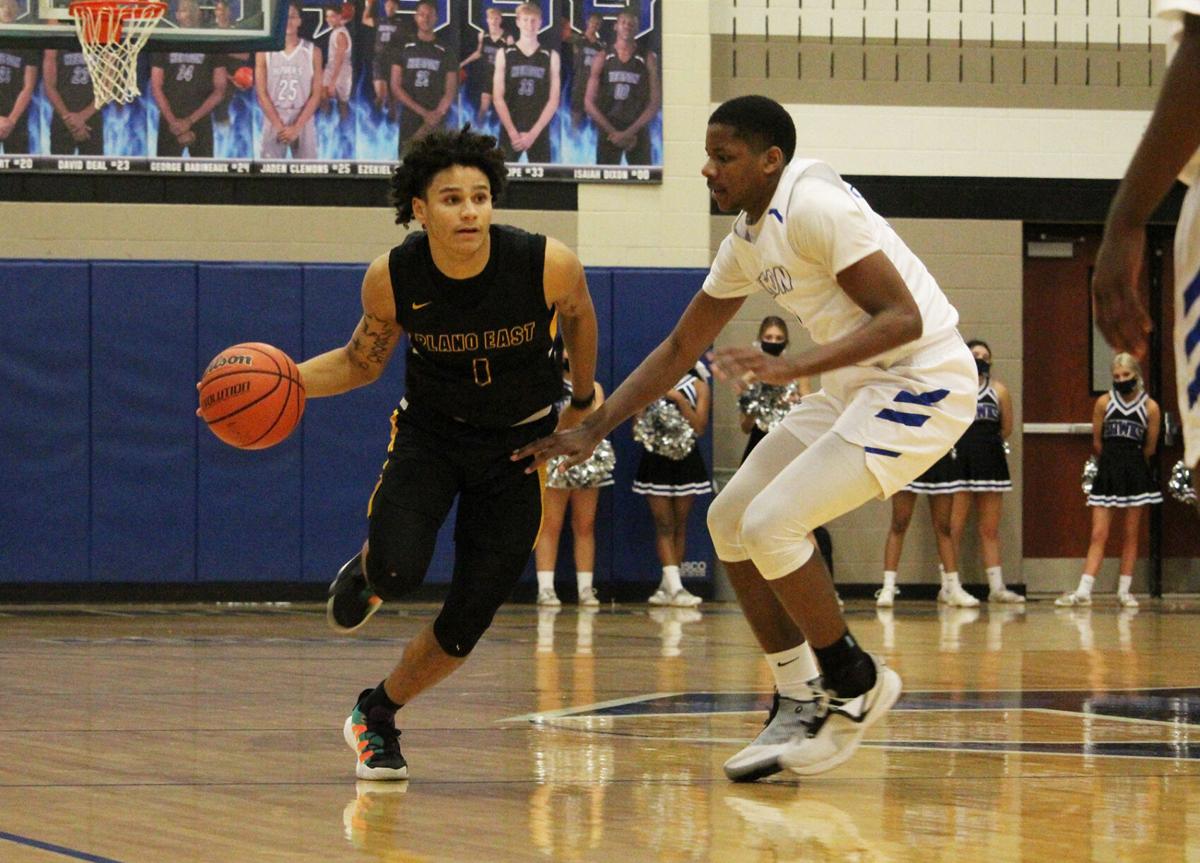 Plano East's Damion Gunnels, left, keyed a strong defensive effort down the stretch to help the Panthers hang on against Hebron on Friday, 57-54. 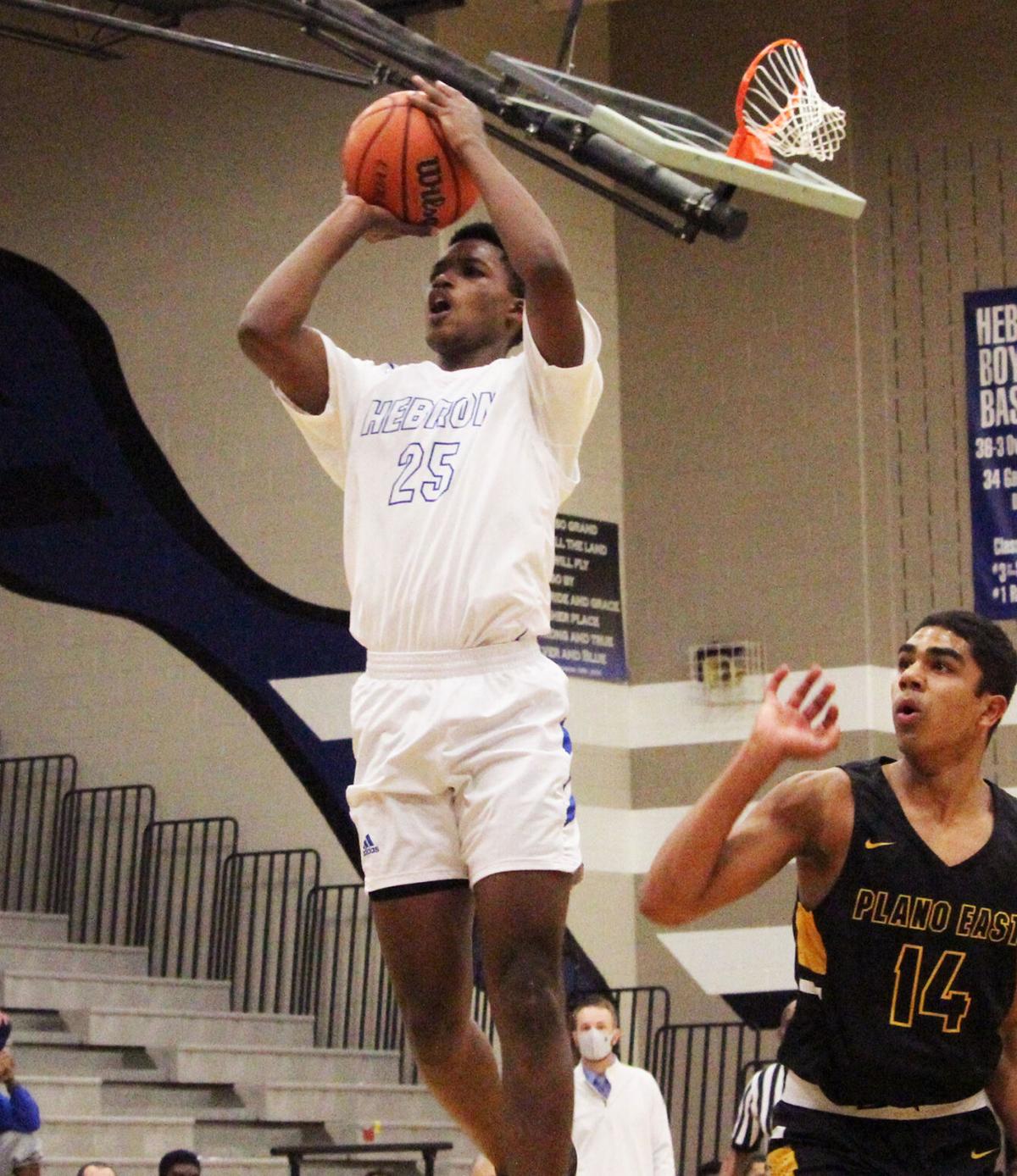 Hebron’s Ezekiel Onoviran led all scorers with 15 points on Friday, but the Hawks fell short in a 57-54 loss to Plano East.

The Plano East and Hebron boys basketball teams took turns shining on offense for the first three quarters in Friday’s District 6-6A ballgame. The closing moments were weighted heavily on the defensive end — an area the Panthers have prided themselves on all season.

East lived up to that billing when called upon, mustering enough stops late to hold off a second-half charge by the Hawks and claim a 57-54 victory that drew the two district foes even in an increasingly crowded middle class in 6-6A.

Hebron (3-3 in district) and East (3-3) entered the night as part of a cluster of five teams separated by one game in the standings.

Although it didn’t reflect in the win column, the Panthers showed well in defeats to the top two teams in the district, Coppell and Marcus. They snapped that two-game skid on Friday despite a commendable charge by Hebron.

The Hawks held East scoreless for seven-and-a-half minutes of game time bridging the third and fourth quarters and managed to trim a 13-point deficit down to one at 53-52 with 1:05 left in the game following a corner 3-pointer from Ezekiel Onoviran.

A double team forced an East turnover at midcourt, but Hebron was unable to capitalize thanks to a timely response from Damion Gunnels. A standout defensive back on the Panthers’ football team, Gunnels pick-pocketed Hebron for a steal that he finished on the other end with a layup that gave East a 55-52 advantage with 31 seconds to play.

“Damion has been playing really well since the break. He played football at cornerback, so we didn’t get him until after Dec. 5,” Wester said. “We had been working him in and started him these last couple games. He’s been a good defender for us, but his offensive side is really coming along. That steal just about won the game for us.”

Plano East's Damion Gunnels comes up with a huge steal and score. Panthers lead Hebron 55-52 inside the final 30 seconds of the ballgame. pic.twitter.com/H1fR8aPEZk

Hebron big man Noah McKinney countered with a put-back that trimmed the gap back to one point with 14 seconds remaining, which gave way to a pair of free throws for East’s Isaiah Brewington. Just a freshman, the guard calmly sank both to restore the three-point lead at 57-54.

“I had no doubt he would make those free throws. He’s a special basketball player,” Wester said. “To already starting some 6A varsity games as a 14-year-old — we haven’t had a freshman on varsity in 16 years and we’ve got two this year. There haven’t been many, so he’s a special kid who expects to win. He takes care of the ball and those two free throws were money.”

Hebron initially fumbled its first chance at a tying basket, forcing assistant coach Garrett Anderson to call a timeout. With just 1.2 seconds to get a shot off, a look for David Deal was blocked by East’s Connor Johnson as time expired.

Anderson assumed head-coaching duties for the night in place of Eric Reil, whose wife had brain surgery earlier in the day.

Hebron’s effort fell short on Friday despite a big outing from Onoviran, who willed the second-half rally with 11 of his game-high 15 points over the final two quarters — uncorking a bruising back-to-the-basket game that punished East inside behind a series of turnaround jumpers.

“[Onoviran] is a freak athlete. He’s an insane jumper and has a great touch from the mid-range,” Anderson said. “We expect a lot out of him and the potential is extremely high with him. He’s tough to stop when he gets going. He gets up so quick with a soft touch that it’s tough to guard.”

The big man led an otherwise balanced night for the Hawks, who received 10 points from Noah McKinney and seven from Nate Mercer. That trio’s rebounding helped Hebron’s near-comeback as well, combining for six offensive boards in the second half.

Hebron also clamped down on the perimeter after getting torched from long range by the Panthers in the first half. East built a lead of as many as 11 points thanks to seven made 3-pointers through two quarters. Brandon Hardison accounted for three triples on his way to a team-high 13 points, while Johnson, Brewington and Jackson Sabey also hit from deep to pace East to a 39-32 lead at the half.

“We went 39 at halftime and finished with 54. We’ve struggled to shoot the ball sometimes this year, but we lit it up early,” Wester said. “A lot of that was our senior, Jackson Sabey, coming in and hitting a pair. His role has been defense and rebounding, but those two shots were huge and gave us a cushion.”

Hebron tightened up on defense to hold East without a make from long range the rest of the way.

“The way we adjusted and rotated over to help. We wanted to stunt and recover a little bit quicker,” Anderson said. “That helped a bit and they didn’t hit any 3s in the second half, so it worked somehow. We just wanted to pick up the intensity and start working together. Just stop the ball instead of trying to get it individually and leaving guys in the corner wide open.”

The Hawks look to bounce back at 8 p.m. Tuesday when they host Flower Mound, while East looks to rise above .500 in district at 7 p.m. at home against Lewisville.

FINAL: Plano East 57, Hebron 54David Deal gets a look at the tying shot, but East's Connor Johnson is there for the contest. Panthers prevail and are even with Hebron at 3-3 in district. Brandon Hardison had 13 pts for East, Ezekiel Onoviran posts 15 for Hebron. pic.twitter.com/g4ToWBVNbF