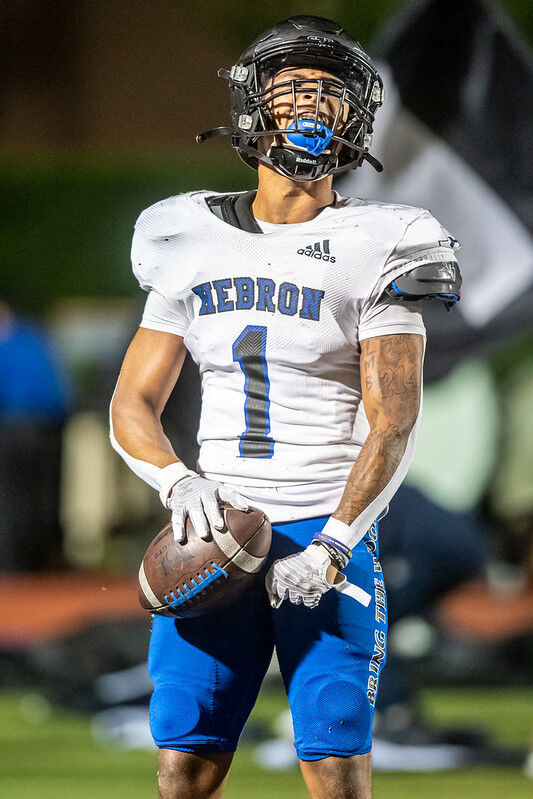 Hebron senior Takoda Bridges exhales after catching one of his two touchdown receptions in Friday’s 34-12 win over Coppell. 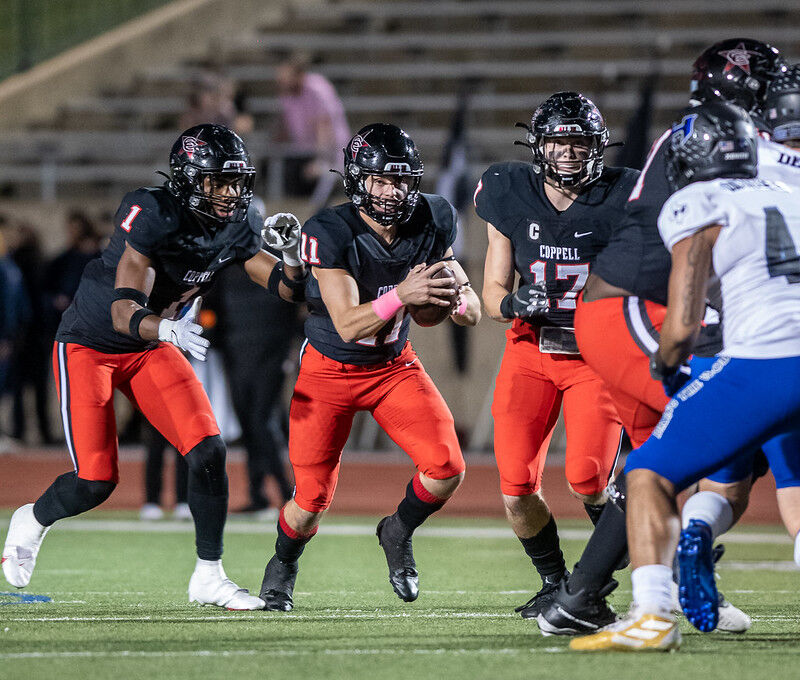 Coppell senior Landry Fee runs for a first down during Friday night’s game against Hebron.

Hebron senior Takoda Bridges exhales after catching one of his two touchdown receptions in Friday’s 34-12 win over Coppell.

Coppell senior Landry Fee runs for a first down during Friday night’s game against Hebron.

COPPELL – The Hebron football team continued its rise Friday night after three straight losses to start the season with perhaps its most complete effort.

Hawks senior quarterback Jacob Buniff completed 11-of-15 passes for 165 yards, the Hawks blocked a field goal and a punt, and held Coppell to 233 yards in a 34-12 victory at Buddy Echols Field to earn their fourth straight win.

“We had a tough non-district schedule,” he said. “We said going in that we can be 0-3 and still be a good football team because we know that we’re a really good football team. For us to come out and do that coming into district, we felt that we were well-prepared. We had some really close wins those first three weeks of district. This one tonight, we were able to get on them a little good and our defense schemed them pretty well.”

Buniff led Hebron on three scoring drives in the first half as the Hawks built a 20-0 lead midway through the second quarter.

Buniff used his feet well to manipulate the pocket, and that helped to open up the passing game for the Hawks. He connected with sophomore Jesse McElroy on a high-arching pass that gained 25 yards on the game’s initial play from scrimmage and the two Hawks hooked up again just two plays later on a 33-yard gain that moved the ball to the Coppell 15. The drive was capped off by an 8-yard touchdown run by junior Fred Ware for a 6-0 Hawks lead.

Hebron’s defense was aggressive all night and that aggressive play carried over to special teams.

Senior nose guard Mykell Sutton blocked a 50-yard field goal attempt by Coppell junior Nicolas Radicic with his hand, and on the final play of the first quarter, junior Braxton Baker ran behind center on a one-yard plunge for a 13-0 Hebron lead.

The blocked field goal came after Coppell had first and 10 at the Hebron 31-yard line. The miss was one of several missed opportunities by the Cowboys. Coppell had a touchdown pass in the first quarter called back on a holding penalty and the Cowboys also committed two turnovers in the first half while managing just 58 yards of offense over that span of play.

“It was really a thing of beauty to watch,” Brazil said. “We got the turnovers we created, a blocked field goal, a blocked punt, just on and on and on. The thing that I liked tonight is that our kids played hard from start to finish. We weren’t clicking on all cylinders, but we played hard.”

Hebron later distanced itself from Coppell. Senior Takoda Bridges caught a one-handed pass in the end zone on a play that covered nine yards for a 20-0 Hawks lead with 6:05 left in the first half.

Coppell appeared to have life to start the second half after senior Dylan Nelson returned the kick to the Hebron 13-yard line. But the Cowboys were called for a penalty for an illegal block in the back on the return. Also, Nelson fumbled on the same play and the ball was recovered by Hawks junior Lane Haworth.

“We did not help our self, especially early, and you can’t do that against a really good team,” said Mike DeWitt, Coppell head coach. “I thought on both sides of the ball we did some things to ourselves early and dug ourselves in a hole. And offensively, we weren’t able to run the ball, and we were forced to play catch-up. They were pinning their ears back and pressuring the quarterback, and that’s not a good situation.”

Hebron played the entire second half without Buniff, who had an ice back wrapped around his right shoulder. Baker came in relief of Buniff and picked up where Buniff had left off. Baker threw a pair of touchdowns – a 33-yard strike to Bridges and a 20-yard pass to Cobye Baldwin.

Coppell put together its best drive of the night in the fourth quarter, leading to a 30-yard pass play from Fishpaw to senior Dylan Nelson. Hebron stuffed Fishpaw on the 2-point conversion. The Cowboys cut the Hawks’ lead to 27-6. Fishpaw added a second touchdown pass on an 18-yard strike to Andrew Nelson with 1:35 left in the ballgame.

In defeat, Fishpaw went 20-of-41 for 184 yards and two touchdowns with two interceptions. Nelson had seven catches for 56 yards.