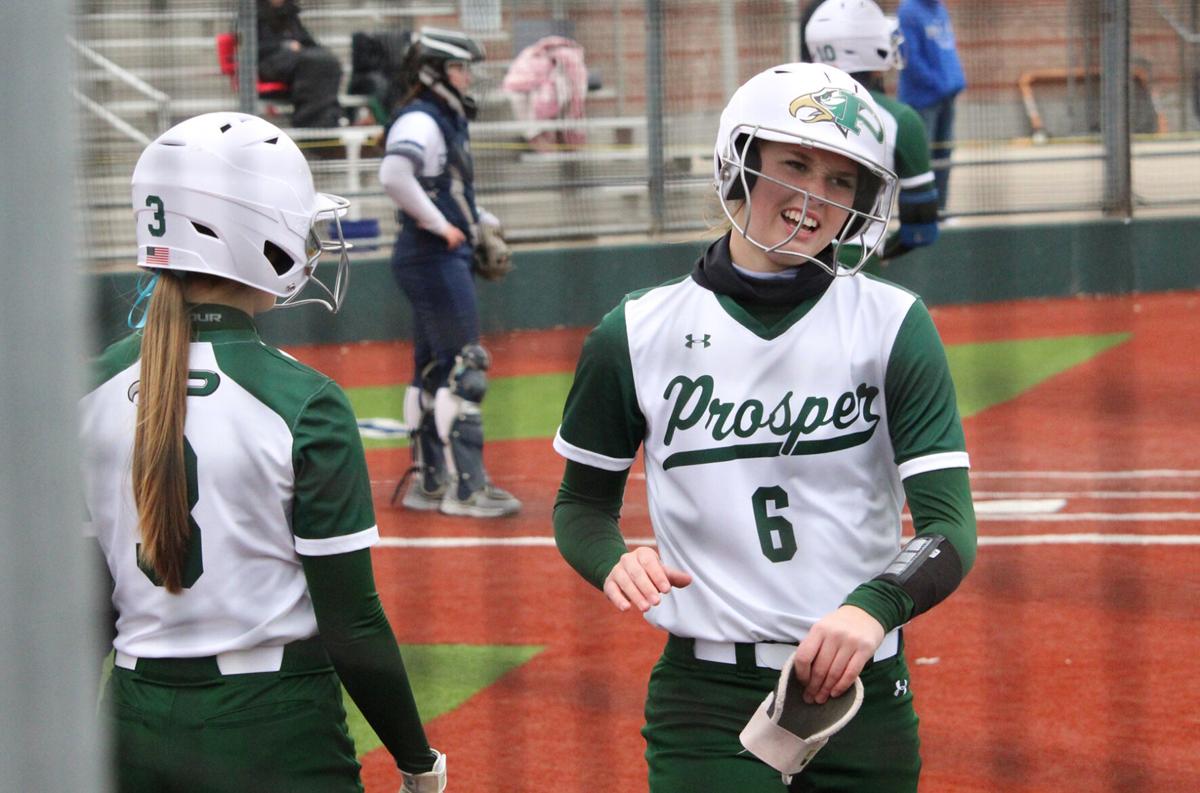 Prosper’s Elizabeth Moffitt was all smiles after a three-run double in the fifth inning of Thursday’s 9-3 victory over Flower Mound. 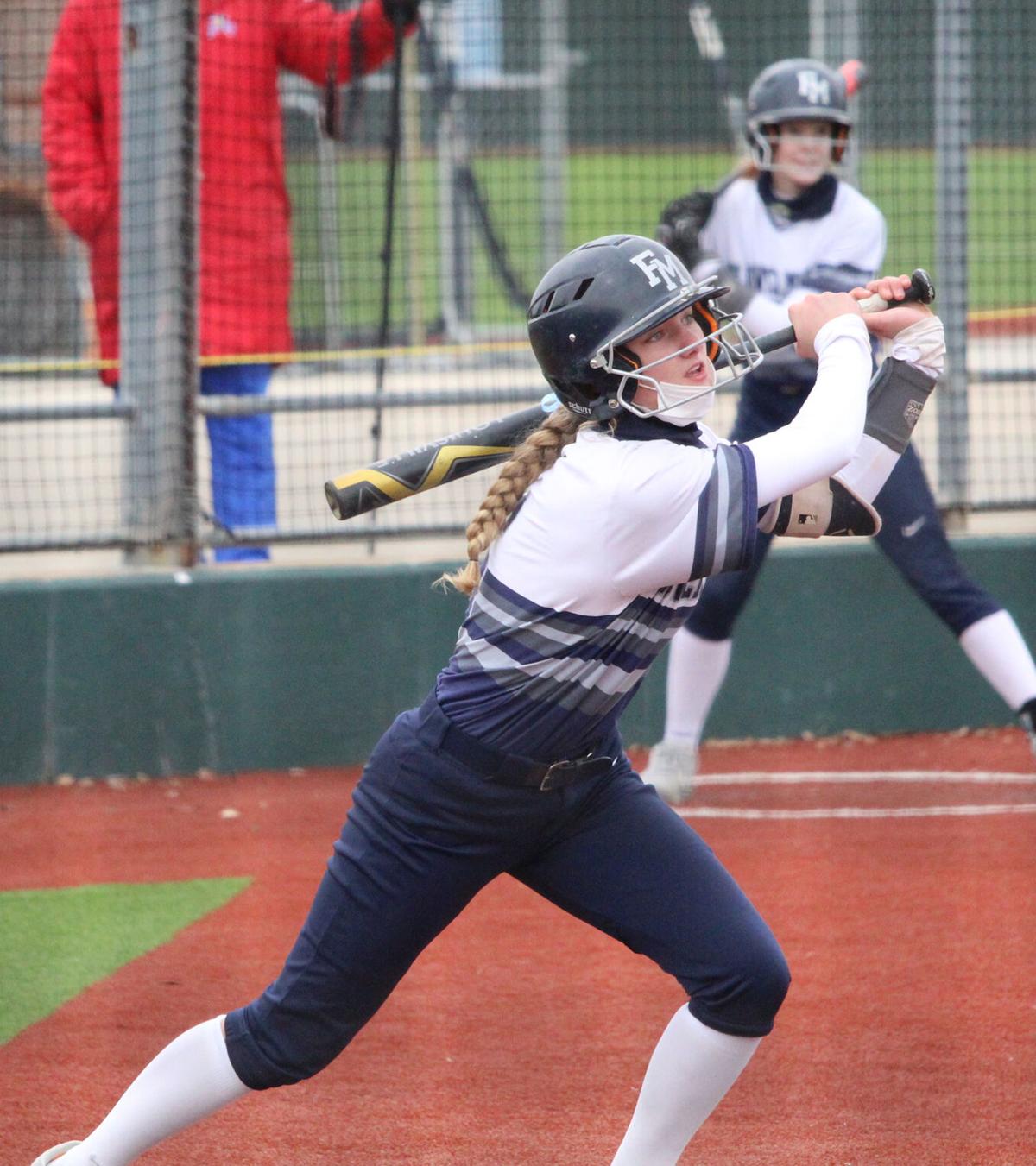 Prosper’s Elizabeth Moffitt was all smiles after a three-run double in the fifth inning of Thursday’s 9-3 victory over Flower Mound.

ALLEN — Thursday’s Allen varsity softball tournament kicked off with a meeting between two of the top programs in the area.

Powerhouses Prosper and Flower Mound, both ranked in the area’s top five in the DFW Fastpitch 6A preseason poll, took up residence on Allen’s home turf at 9 a.m. in the first of 82 tournament games played at Allen’s two on-campus softball fields plus the four nearby fields at Allen Station between Thursday and Saturday.

Although teams are still ironing out lineups and rotations, plus honing chemistry on the field, one constant early into the regular season has been the Prosper offense.

Less than 48 hours removed from blasting Plano for an 11-1 victory in its season opener, the Lady Eagles used a resounding fifth inning to distance from Flower Mound for a 9-3 win.

With tournament games contained to just five innings, Prosper never trailed against the Lady Jaguars — manufacturing three runs in the opening frame after capitalizing on a pair of wild pitches that plated runs followed by a fly-out from Gabby Coffey that allowed Kristi Ortega to tag up and score for a 3-0 advantage.

Flower Mound, bolstered by a three-hit morning from Logan Halleman and a pair of RBIs by Carsyn Lee, managed to close the gap to 4-3 through four-and-a-half innings before Prosper rounded out the contest with an exclamation mark in the bottom of the fifth.

The Lady Eagles accounted for four of their seven hits in that frame, many coming in succession. Three consecutive singles by EB Bobbitt, Jessica Malan and Ayden Allen led off the inning before Sydney Lewis drew a bases-loaded walk and Elizabeth Moffitt blew the ballgame open with a bases-clearing double for an 8-3 advantage.

The loss dipped Flower Mound to 1-1 on the season. Prior to Thursday, the Lady Jaguars doubled up Allen for a 6-3 win on Tuesday thanks to home runs from Lee and McKenna Andrews.

The Lady Farmers began their 2021 season in dramatic fashion, edging the Lady Cougars, ranked No. 9 in 5A by DFW Fastpitch, on an eighth-inning sacrifice fly by Riley Haney to score the winning run in a 9-8 victory.

Tuesday’s shootout featured a combined 20 hits and five lead changes — the last coming in the eighth inning after Aubrey Bowers got on base via error. She advanced to second base on a passed ball on the following at-bat and then to third on a groundout by Rikki Murray. Haney’s fly-ball followed, allowing Bowers to tag up and score the game-winning run.

Lewisville totaled 11 hits in the win, highlighted by a two-run double by Emilee Till and a triple from Rylee Brice. Haney finished her night at 3-of-5 with a pair of RBIs while Till knocked in three runs in the victory.

Some of the team’s best work came on the basepaths, including in the bottom of the seventh inning to help knot the game up after trailing 8-5. Lewisville totaled three stolen bases in the win, including a steal of home by Madeline Brooks to tie the contest at 8-8.

Bailee Medrano-Pope got the win in the circle after tossing 4.1 innings in relief. She allowed four runs on seven hits, plus three strikeouts, but managed to retire The Colony in order in the top of the eighth inning to set up her team’s late-game heroics.

With McKinney Boyd waiting on the return of phenom pitcher Kinsey Kackley, who’s recovering from an ACL injury, the Lady Broncos had a tough time slowing a Marcus lineup that totaled 17 hits and baited Boyd into 11 errors on Tuesday.

The Lady Marauders spread their scoring with three innings of at least four runs and totaled seven extra-base hits in the win. That included a two-run home run by Haidyn Sokoloski on just the game’s third at-bat, which got the ball rolling for Marcus.

Sokoloski finished 3-of-5 from the plate, scoring two runs and knocking in three. She was one of five Lady Marauders who recorded multiple hits on Tuesday with Tori Edwards (2-of-3, three runs), Alexa Hanish (2-of-2, one RBI), Emma Adair (3-of-5, one run, three RBIs) and Alea Deserrano (1-of-4, one run, two RBIs) also getting in on the action.

In the circle, Matie Wolkow and Abby Kubin teamed up to limit the Lady Broncos to two runs (one earned) on five hits, with Kubin striking out four batters.

A pitcher’s duel ensued in Wylie, with Hebron getting the better of its season-opening bout thanks to a three-run second inning on Tuesday.

The Lady Hawks knocked in runs on three consecutive at-bats with the bottom third of the batting order coming through. Shorey Nguyen singled to score the game’s first run and later found home plate on a double by Samantha Puente. Madison Berry plated Puente on a groundout to make it 3-0.

East struck back with two runs in the bottom of the third inning before both teams settled in to hold each other scoreless the rest of the contest.

The nine softball teams in 11-5A were thrown into the fire on Tuesday for the first night of conference matchups. The programs from Carrollton-Farmers Branch ISD were already up against an abbreviated preseason schedule before the recent outburst of winter weather cancelled the annual Tournament of Champions, a three-day event held at Oran Good Park on Feb. 18-20.

C-FB ISD went 1-2 in Tuesday’s opening round of matchups, including an early district victory for Newman Smith. The Lady Trojans used a five-run second inning to create enough distance to hold off WT White for an 8-6 victory.

Lane also got the win in the circle after striking out 13 batters over seven innings pitched.

While Smith found the district win column early, RL Turner had a tougher go against Woodrow Wilson. The Lady Lions, despite an RBI from Mia Uvaldo, dropped a 14-1 verdict to Wilson, while Creekview was blanked 23-0 by Princeton in a non-district bout.

District 6-6A begins its softball schedule on Tuesday. Opening-night matchups include Lewisville at Plano West, Marcus at Flower Mound, Hebron at Plano East, and Coppell at Plano.