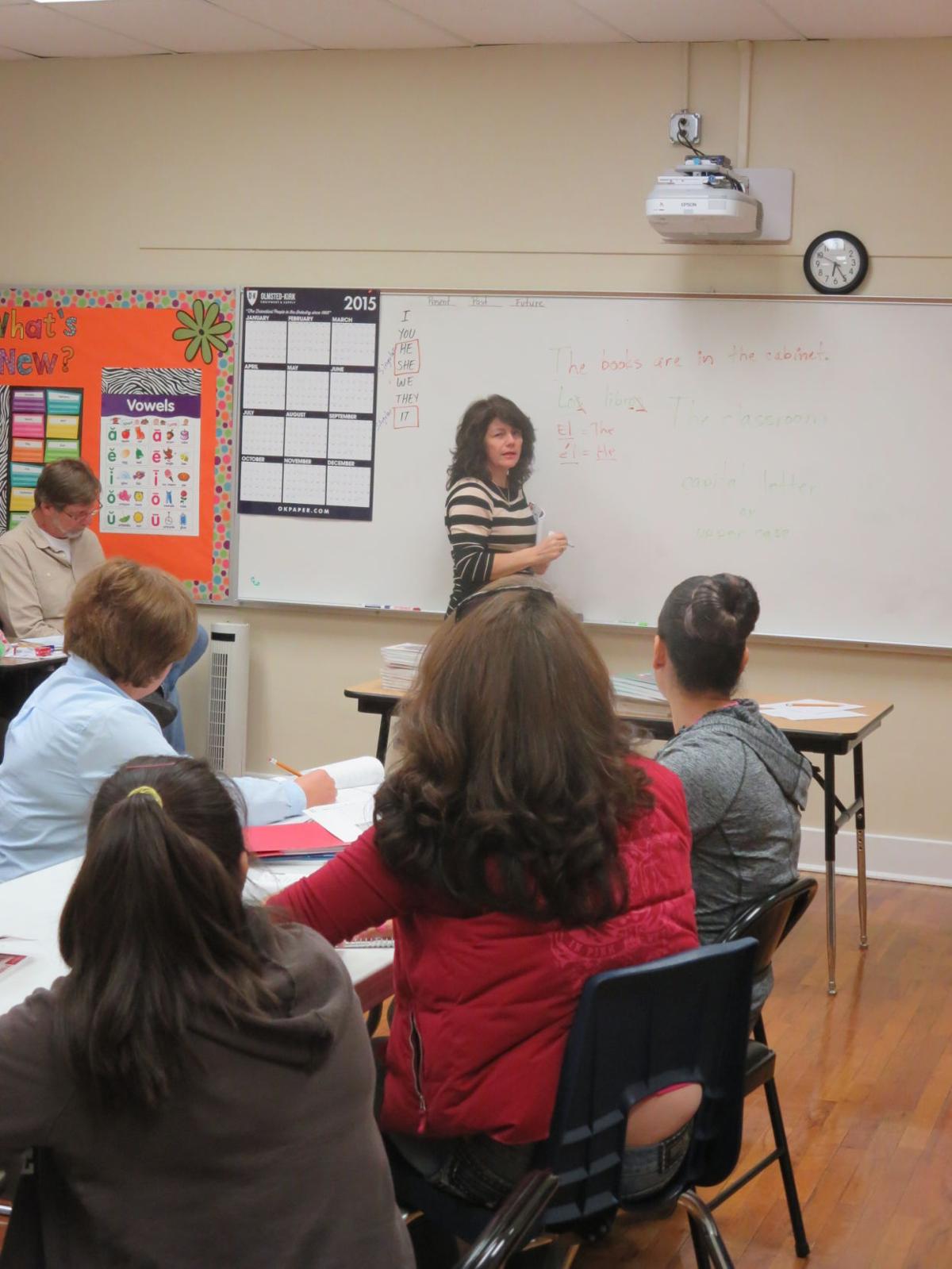 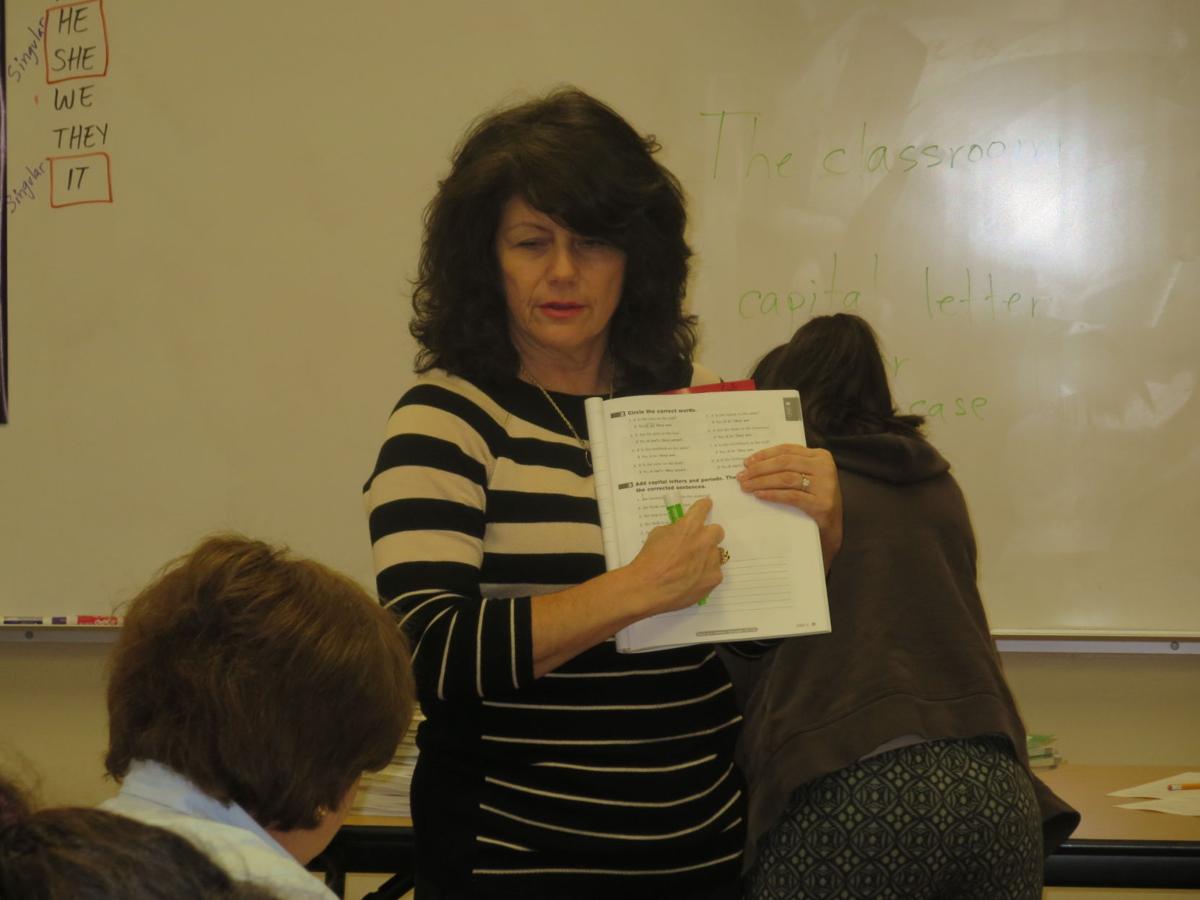 Students follow along as Leticia Williams teaches lessons from a workbook during an English as a Second Language class at Celina ISD’s administration building.

Students follow along as Leticia Williams teaches lessons from a workbook during an English as a Second Language class at Celina ISD’s administration building.

For years, Susan has regretted her decision to drop out of school.

It was the mid-1990s. She was 16 years old and a newly minted driver who was about to begin her junior year at Celina High School.

But the classes “were hard,” she recalled, “and I wasn’t good at math.”

At the time, a job waiting tables at the old Bobcat Café downtown seemed to make more sense. “Then I found out that was a mistake,” said Susan (who asked that her real name not be used).

“It would have been much easier if I would have just finished. I missed out on things, like walking across the stage and getting my diploma,” she said.

Nearly 20 years later, at age 39, she is studying for her GED certificate through twice-weekly Adult Education classes offered free of charge by Celina Independent School District.

The program, which also includes English as a Second Language courses, was founded in 2009 by Jill Roza, the district’s director of adult education services.

Roza learned about an ESL program at a school in Arkansas where her adult daughter was teaching and thought it would be a good fit for Celina.

Back then, Roza was the assistant principal at Celina Intermediate School. She said that she had frequently encountered parents “who didn’t feel comfortable coming into the school system if they didn’t speak English,” which made it difficult to “get them the information they needed for their children to be successful” in school.

“Many did not have a firm foundation in their own language,” she recalled, “and so I wanted to do something that would create that harmony between the community and the school and would make them feel much more comfortable coming into a school setting.”

The first ESL classes in Celina were held from January through May of 2010 at the intermediate school. Plans to move the classes to another building within the district stalled later that year and effectively put the entire program on hold until fall 2011.

Around that time, Roza and her staff began following Denton ISD’s Adult Education and Literacy program, which is offered at satellite campuses throughout Collin County.

As part of the program, Denton ISD provides the curriculum and typically hires and pays the salaries of the instructors who teach its Adult Education courses. “We just provide the facility,” Roza explained.

The classes meet weekly on Tuesday and Thursday evenings at the Celina ISD administration building, at 205 S. Colorado St.

More than 50 students – who live as far away as Howe, Tioga and Pilot Point – are enrolled in ESL classes led by instructor Leticia Williams. However, only a fraction of the students attend regularly.

Williams knows firsthand how daunting it can be to learn the language as an adult: The Mexico native was 29 when she spoke her first words in English.

“So I know what they’re going through,” she said.

Williams spent three decades working as a material handler at Texas Instruments, during which she put herself through college before left the company to become a teacher.

During the day, she teaches Spanish to Denton ISD middle schoolers. This is her first year teaching ESL to adults.

The class this semester is dominated by women, many of whom arrive with their children in tow. Roza said Celina’s is the only Denton ISD satellite campus that offers free child care to its Adult Education students.

On a recent night, Williams stood at the whiteboard and helped a student correctly spell the days of the week. She practiced patience while explaining the difference between a watch and a clock to the group, and praised a pupil for properly pronouncing “wall.”

It wasn’t too many months ago, Williams said, that she was reading books to her adult students. “Now they can read books to me. It’s amazing in such a short time.”

Roza added: “Watching them come into class with their supplies, they are so excited and they want to learn because they know that it’s benefitting their children. Many of them will say,’I want to help my child with their work.’”

A few years ago, Roza added GED classes to the Adult Education offerings.

“Many of [the students] have voiced that once they got through the Adult ESL program, they would love to start working on their GED. It was just a natural progression,” she said.

On the flip side, while Celina schools don’t have a high dropout rate, Roza said certain situations force some students into making the decision to quit their education.

“Not every child goes home to [parents] supportive of their child going to school every day or their child graduating high school,” she explained. “That’s the reason I wanted the GED component. I knew there were people out there who would need that.”

Only a handful of students attend the GED classes. Nevertheless, Roza said, “It’s important to them and they know it is going to make a difference in their lives to have that (certificate). … The bottom line is they’re in class and they’ve put their mind to it that this is where they want to be.”

Susan began attending GED classes about a month ago, deciding to do so only after her two teenage children began to discuss quitting school themselves.

Susan recently passed the English exam portion of the GED exam and said she hopes to complete the science, social studies and math sections of the test by May – around the same time her 18-year-old son is set to graduate from Celina High School.

“I told him we may have a graduation party together,” she said.

It’s an excellent go on behalf of faculties and also the law-makers call is sort of right, I found the data through in style essayontime writers service. I appreciate the author for posting such helpful data.