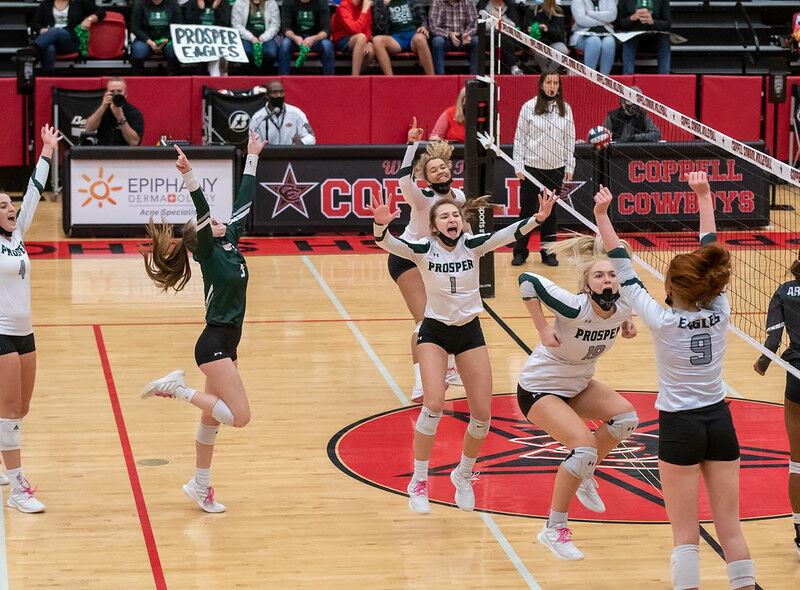 Prosper's volleyball team celebrates a point won during a Class 6A Region 1 Area Championship at Coppell on Tuesday.

Prosper's volleyball team celebrates a point won during a Class 6A Region 1 Area Championship at Coppell on Tuesday.

Based on their placement into Region 1, national powers Flower Mound and Prosper were bound to meet at some point during the Class 6A volleyball playoffs.

Of course, the third round is where Flower Mound’s aspirations for a second consecutive state title were dashed a year ago after a 3-1 (22-25, 25-22, 25-22, 28-26) loss to eventual state champion Byron Nelson. Those two teams would meet next week in the regional semifinals should both defeat their respective opponents this week. Byron Nelson plays Southlake Carroll.

So far this postseason, Flower Mound (20-1) has met every challenge with relative ease.

On Tuesday, Flower Mound, ranked No. 3 in the nation in the latest American Volleyball Coaches Association/USA Today poll, had little trouble with Richardson Pearce. The Lady Jags dispatched the Mustangs 3-0 (25-11, 25-14, 25-12) in an area championship played at Coppell.

Arizona State signee Angelique Cyr had three booming kills and a service ace in the first set. Missouri-bound Kaylee Cox had four service aces in a five-point span during the second set to set the tone. Junior middle hitter Isabella Ortiz had two point-ending blocks in the third set.

“I’m proud of how our young ladies are competing,” said Jamie Siegel, Flower Mound head coach. “We are excited to play another day.”

Prosper benefited from six service errors by Arlington in the first set. The Lady Eagles found their offensive rhythm in the second set, which included six straight points scored by the Lady Eagles.

“We just showed a lot of grit that night against Coppell, and they know that if they play their game, they are unstoppable,” said Erin Kauffman, Prosper head coach. “So, the goal is to come out firing on all cylinders and not wait to see what the other team will give us before deciding to play.”