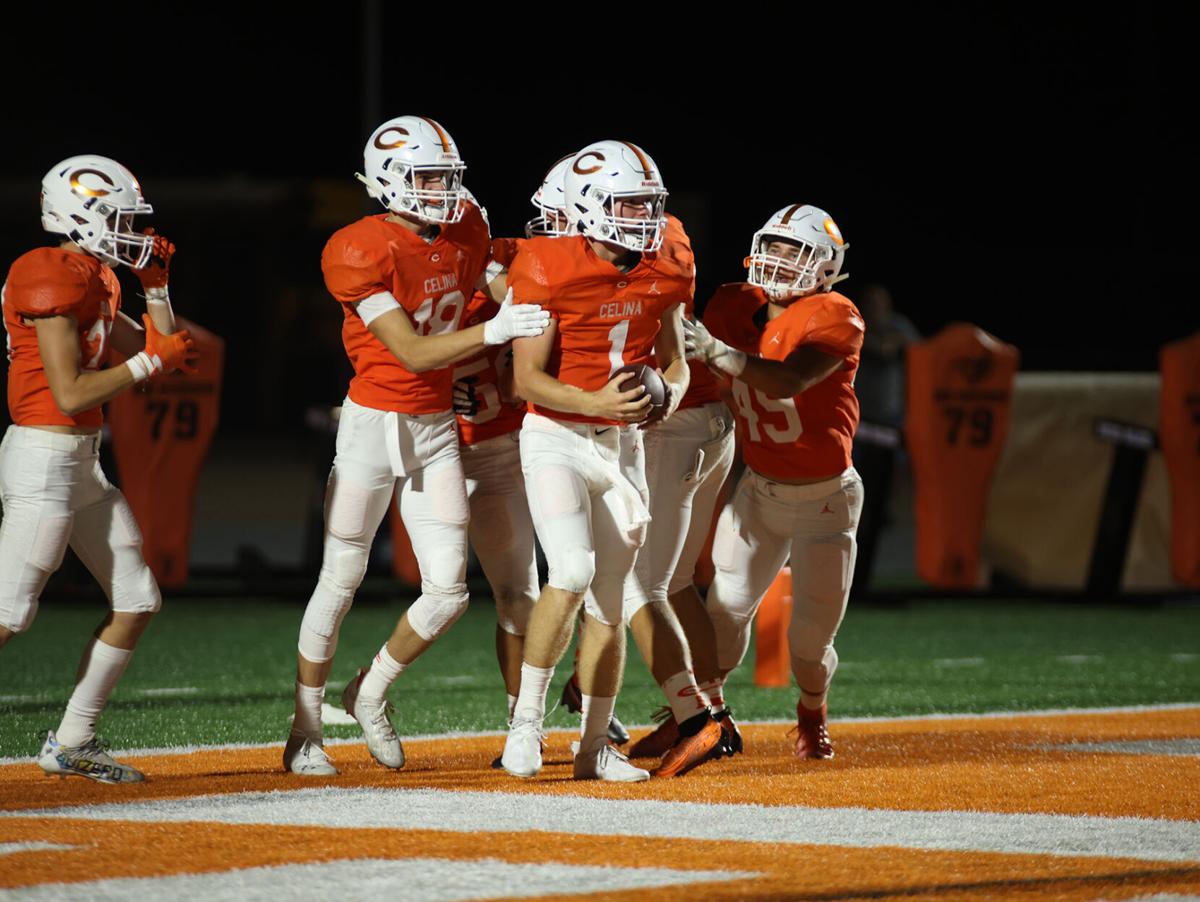 Celina junior Noah Bentley (1) is congratulated by his teammates after scoring one of his four touchdowns in Friday’s 35-24 win over Paris. 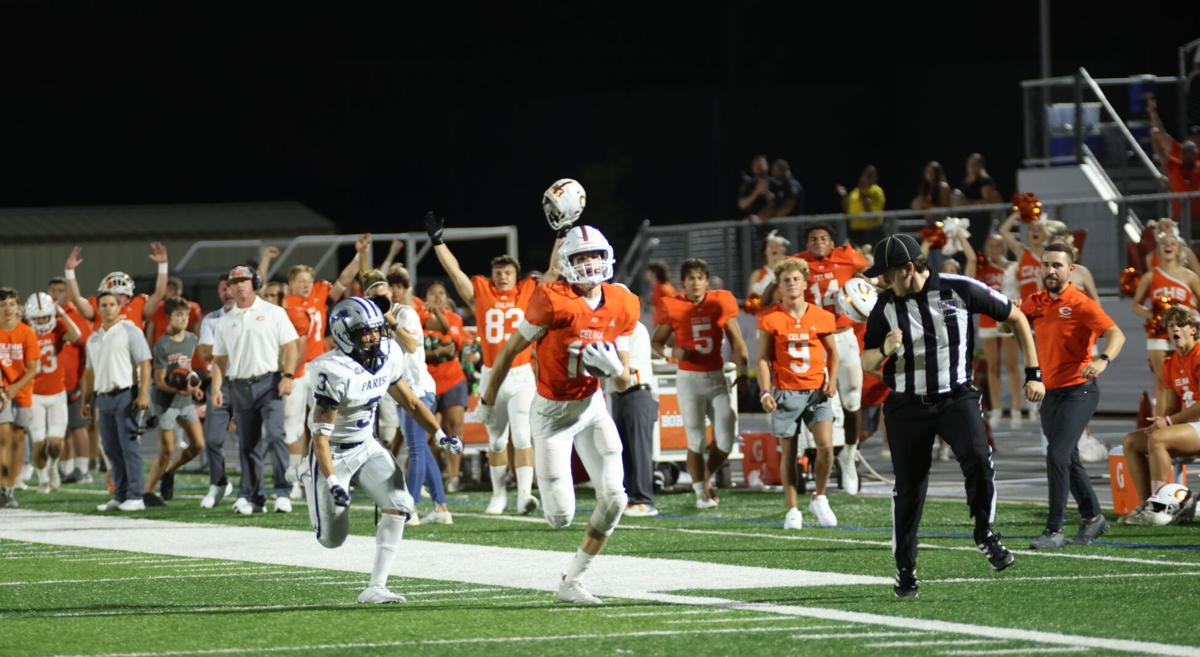 Celina senior Brower Nickel takes off after a long reception during Friday's win over Paris.

For any struggles the Bobcats endured during some rough opening moments in Friday’s state-ranked showdown with Paris, it didn’t take long for Celina to put those hardships to rest.

Despite an early 10-0 hole, the Bobcats scored the next 28 points of the ballgame — wearing down a physical Wildcat bunch en route to a 35-24 victory from Bobcat Stadium that improved Celina to 2-0 on the season. Building off a 34-13 win over Melissa the week prior, both of the Bobcats’ victories have come over opponents ranked in the state’s top six in Class 4A Division I.

“I talked to our offensive line about staying in the game,” said Bill Elliott, Celina head coach. “That goes for the whole team. We just have to stay in the game. We’re a big, physical, strong team that can eventually wear somebody down. They came out on fire — they were hot, they were athletic and they were fast.

“But with our size and strength, over time, I think if we continued to pound away then eventually somebody’s will would break.”

It meant withstanding an early blitz by Paris, which sprinted out to a 10-0 lead through one quarter. Lyric Tredwell punctuated a 91-yard drive with a 64-yard touchdown run with 7:28 left in the first frame, and kicker Paul Torres tacked on a 26-yard field goal on the Wildcats’ following drive.

Celina’s attempts to counter fell flat, succumbing to the Paris pass rush and even heaving an interception off a quarterback-receiver miscommunication.

The Bobcats found a jolt thanks to a 94-yard touchdown pass from junior Noah Bentley to senior Collin Urich with 8:37 left in the second quarter. Bentley baited the Wildcats offsides and then promptly heaved a dart downfield that hit his top pass-catcher in stride, sprinting untouched the rest of the way for Celina’s first points.

“That was huge. Big plays like that are what you need to get the energy going and the momentum on your side,” Elliott said.

The Bobcats took control for the remainder of the half — Bentley found senior Brower Nickel for a 28-yard touchdown with 6:22 remaining, and senior Brady Cunningham bolstered the Celina run game with a 1-yard score for a 21-10 halftime advantage.

Despite some early struggles containing the Paris rushing attack, which bases out of the seldom-used wing-T, Celina stiffened up against the run to round out the half — the Wildcats amassed just 27 rushing yards in the second quarter after logging 149 in the first quarter.

“It’s very discipline-oriented,” Elliott said. “Everybody out there has an assignment. They’ve got to get aligned and know their assignment. Against an offense like that, the biggest thing is just getting lined up correctly and doing your job. We broke down a few times and gave up some big plays, and that was a result of not doing our jobs. Our guys saw that and I know they’ll get better from it.”

The Bobcats made it 28 consecutive points early in the third quarter after turning an attempt at a fourth-and-one conversion into a 54-yard touchdown run by Bentley for a 28-10 advantage. Paris at last mustered a counter a couple minutes later on a 42-yard touchdown pass from quarterback Luke Hohenberger to GiTaeus Young with 4:38 remaining the third.

Celina didn’t let Paris chip away any further — despite a missed field goal and lost fumble by the Bobcats, the Wildcats’ attempts to capitalize both resulted in turnovers forced by the Celina defense. Junior Jacob Vincent and senior Hunter Neely were in on a pair of fumble recoveries and senior Cole Marthiljohni picked off Hohenberger in the end zone midway through the fourth quarter.

Following Vincent’s takeaway, which staked the Bobcats deep in Paris territory, Bentley gave Celina a bit of breathing room with a 7-yard touchdown pass to Cunningham just two plays in the fourth quarter for a 35-17 lead.

Cunningham, who scored two touchdowns in the win, was one of several Bobcats who took on an added workload due to injuries accrued throughout the ballgame.

“We had to use some guys in bigger roles and it’s great to see them get that experience. It’s something that can help us down the road, but you hope those other guys can bounce back because we’ll need them this week.”

Sitting at 2-0 and having avenged two losses from last season’s 0-3 start, the Bobcats will draw their third state-ranked opponent in as many weeks to begin the season when they visit longtime rival Argyle, ranked No. 1 in 4A Div. I, at 7 p.m. Friday.

“Our kids are playing hard, getting after it and have a great attitude,” Elliott said. “That’s all you can ask for. They’ve got something they want to prove and are doing a good job at it so far, but we’ve got a big one this week. It’ll be a challenge.”