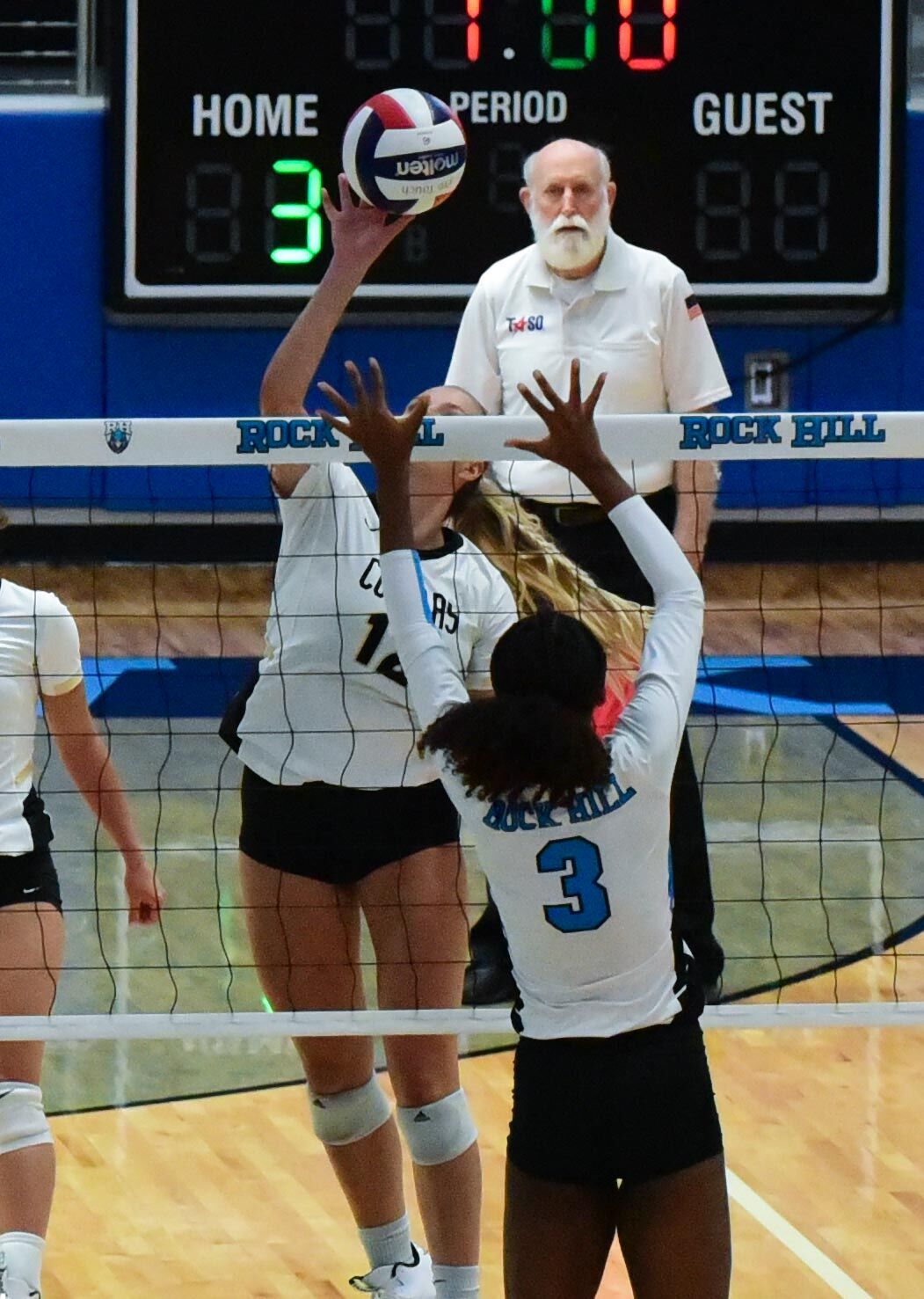 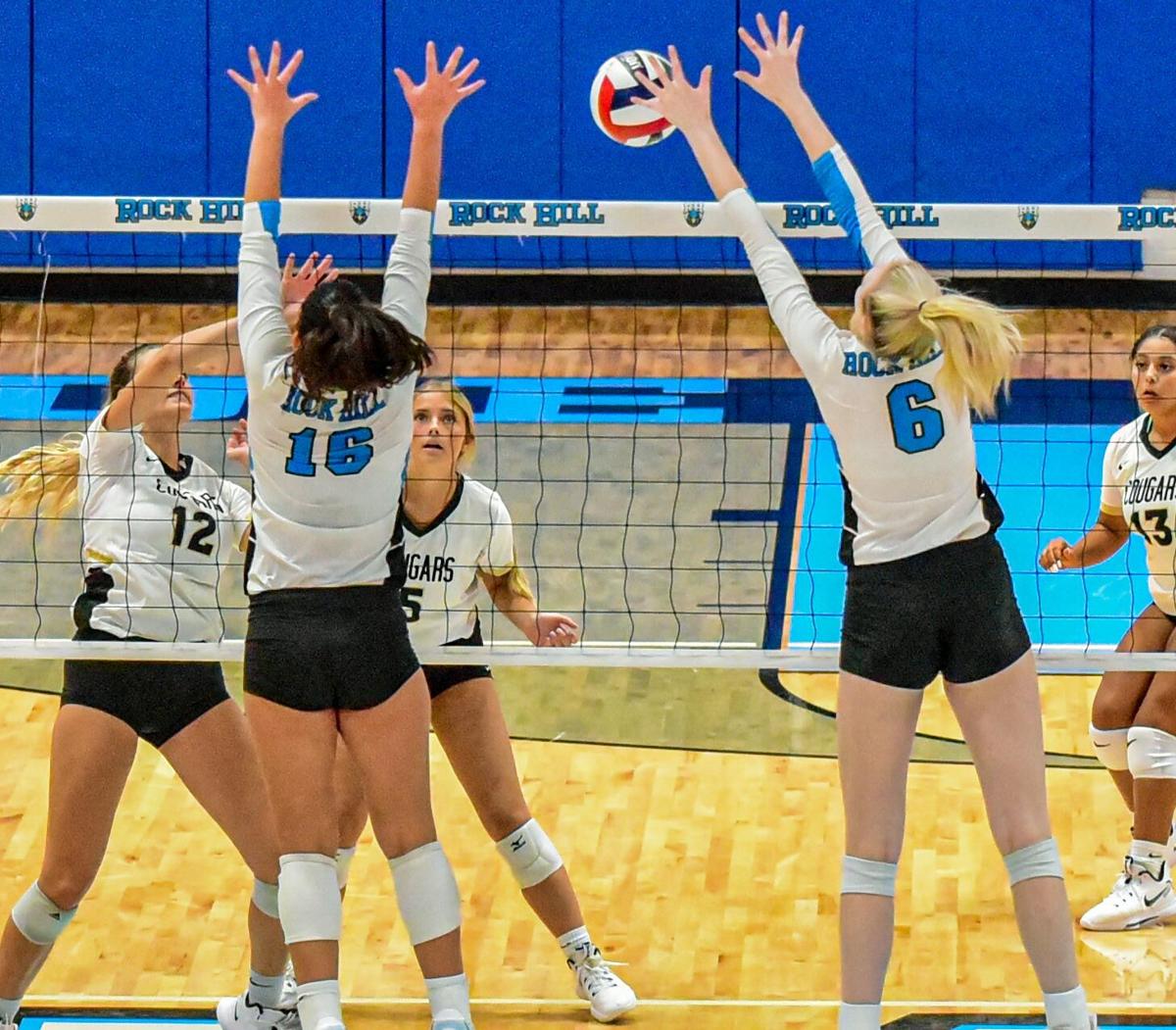 Rock Hill senior Hailey Smith (6) blocks a hit by The Colony senior Natalie Hawkins on Tuesday. Smith finished with 10 kills in the Blue Hawks' 3-0 sweep of the Lady Cougars.

Rock Hill senior Hailey Smith (6) blocks a hit by The Colony senior Natalie Hawkins on Tuesday. Smith finished with 10 kills in the Blue Hawks' 3-0 sweep of the Lady Cougars.

“Both Hailey and Alexa are seniors with a great deal of experience, and both young ladies have been making plays for us the last two years,” said Angel Mauterer, Rock Hill head coach. “They have both stepped up this year to lead by example and push our team to victory. All of the girls on the roster are hungry for a successful year and have pushed each other to be their best.”

When these two teams met last season, The Colony and Rock Hill split the season series with both matches needing five sets. But the Blue Hawks, now in their second season as a varsity program, made quicker work of the Lady Cougars this time around.

The Colony jumped out to a 7-5 lead in the first set after a kill by sophomore outside hitter Josie Bishop – one of four kills in the opening game for Bishop. But Rock Hill’s balance on offense began to show up a short time later. Senior Oni Ross recorded two kills in a four-point span to give the Blue Hawks a 10-8 advantage.

Senior Lily Quinones swatted the ball for a kill later in the set to cut the deficit to 16-12. But that was as close as the Lady Cougars got. Smith rose in the air and hit the ball for a kill on the very next point, and the Blue Hawks proceeded to finish the first set on a 9-2 run.

For all the plays that Smith made Tuesday night, the one that benefitted her team the most came midway in the second set.

The Colony (18-7 overall, 0-2 10-5A) regrouped in the timeout between the first and second sets and played with more urgency during the second game.

Although the Lady Cougars never led, they matched the energy of the Blue Hawks, getting as close as 17-16 after a service ace by junior libero Kacie Rangel. But following a pair of errors, Smith made her presence knowing, recording back-to-back kills to give Rock Hill a 19-17 lead. Then, following a timeout by The Colony, Breslin added two straight kills of her own to pad the Blue Hawks’ lead to five points.

In the third set, a slew of unforced errors on balls hit out of bounds by The Colony gave Rock Hill the early momentum. But Lady Cougar senior middle blocker Natalie Hawkins did all that she could to keep her team in the game. Hawkins had two thunderous kills out of a timeout, and she was only getting started. She finished the third set with four kills and a service ace.

But more errors prevented The Colony from getting to within four points of Rock Hill late in the third set, with a violation on the Lady Cougars on the final point of the match allowing the Blue Hawks to earn the sweep.

It wasn’t just the offense that impressed Mauterer.

“I loved our scrappy defense in the match,” she said. “I think our ability to prolong rallies gave us the extra spark we needed to win the match. We were able to frustrate The Colony's hitters and force them to play a different style then they are used to playing.”