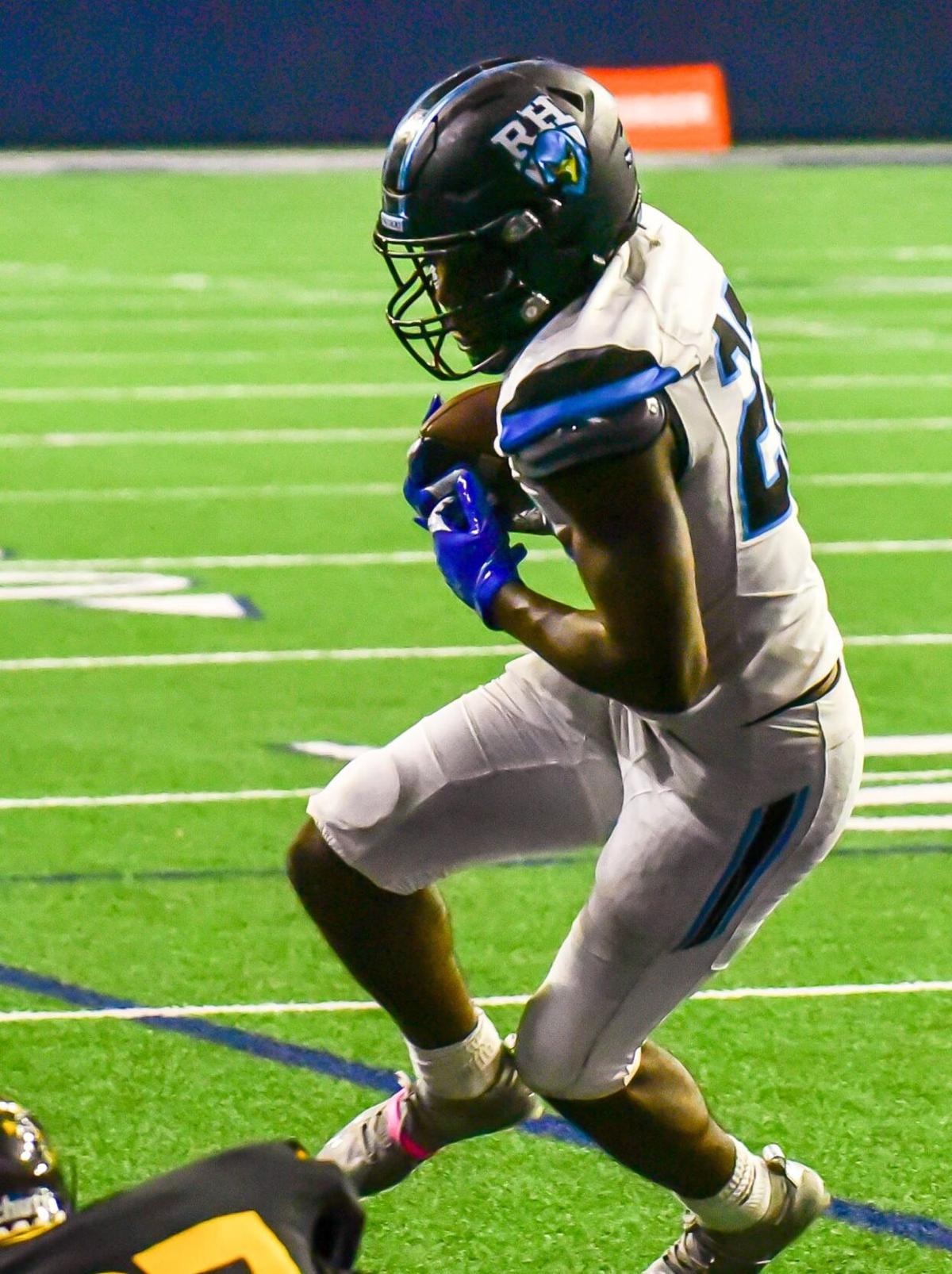 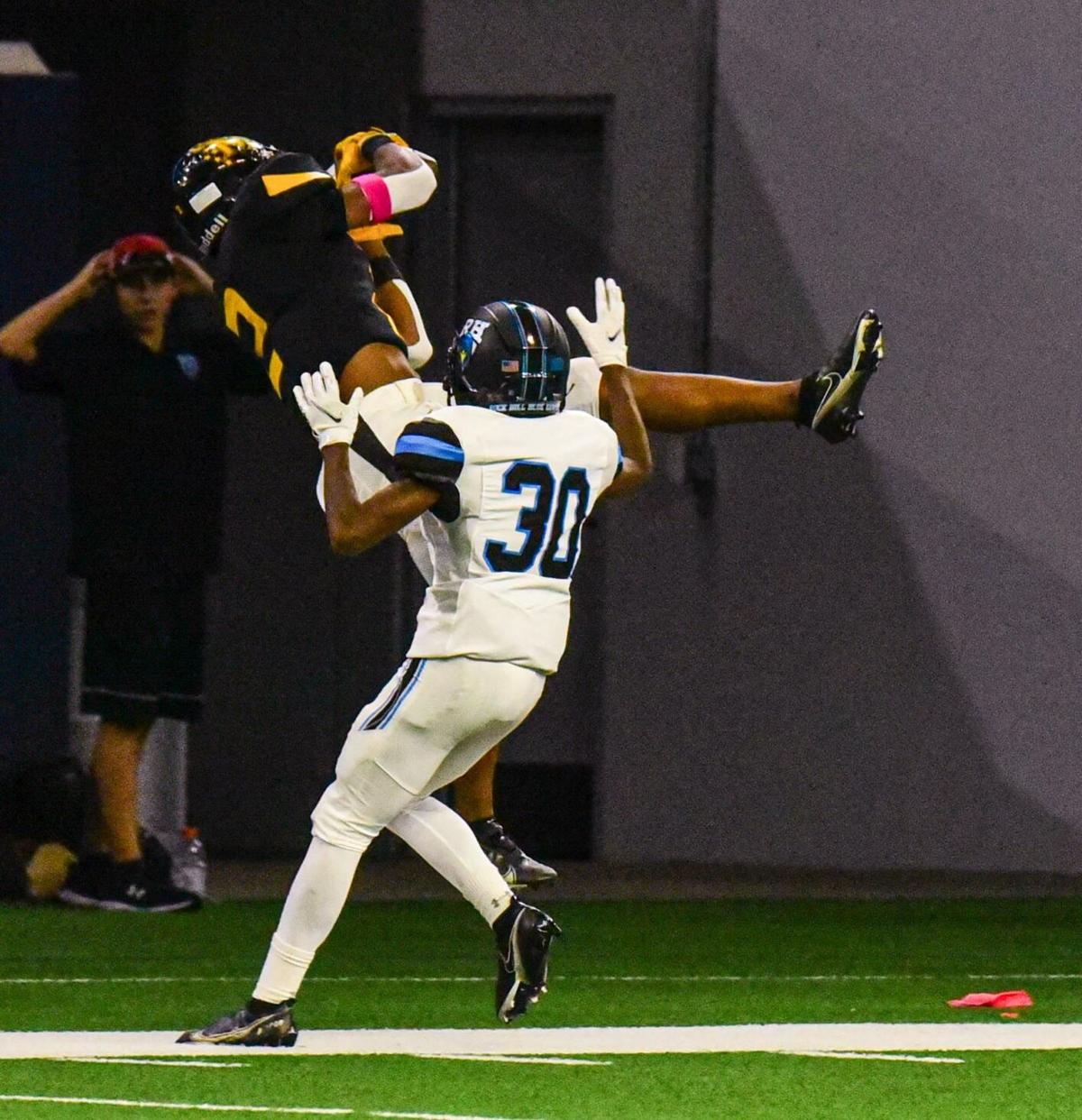 Frisco Memorial senior Zion Steptoe goes up in the air to catch a pass near the goal line in Thursday’s game against Prosper Rock Hill.

Frisco Memorial senior Zion Steptoe goes up in the air to catch a pass near the goal line in Thursday’s game against Prosper Rock Hill.

FRISCO – With a chance to clinch the third victory of the season, Prosper Rock Hill head coach Mark Humble had no doubt in his mind that senior running back Donovan Shannon would gain a first down on 3rd and 27.

“There was no doubt,” Humble said. “You talk about a senior, an experienced guy, a big-time guy, you hand it to your dudes when it matters the most.”

Shannon gained 47 yards on the play and Rock Hill proceeded to run out the remaining time on the game clock to earn a 31-20 come-from-behind win over Frisco Memorial on Thursday at The Ford Center at The Star.

The long run capped off another big game for Shannon, who rushed for 205 yards on 32 carries with three touchdowns.

Memorial had all of the momentum in the early going. Freshman quarterback Braeden Mussett, starting in place of injured senior Ethan Lollar, used his legs and his arm to lead the Warriors to attain points on each of their first two drives of the ballgame.

A 27-yard passing play from Mussett to Purdue commit Zion Steptoe led to a 41-yard field goal by junior place kicker Ian Villareal for a 3-0 Memorial (4-4, 2-2) lead with 9:07 left in the first quarter.

Then, after a three-and-out by Rock Hill, a 36-yard screen pass from Mussett to senior Elijah Johnson on third-and-25 led to a 1-yard burst by sophomore Brandon Tullis for a 10-0 Warriors lead.

Mussett finished 13-of-20 through the air for 117 yards and also led the Warriors’ ground game with 49 yards on 19 carries. Steptoe had five receptions for 54 yards.

Shannon answered with a 68-yard burst for a score on the third play of the ensuing Rock Hill drive, but a 31-yard interception return for a touchdown by Memorial senior Amin White not long after bumped the Warrior advantage to 17-7 with 1:51 remaining in the first quarter.

But it was a play by Rock Hill’s special teams that completely changed the complexity of the ballgame.

Blue Hawks junior punter Garrett Silvestri boomed a punt that pinned the Warriors at their own 1-yard line.

That punt led to big things for Rock Hill. Two plays later, junior Casy Adjei recovered a Tullis fumble at the 3-yard line. Shannon ran in from the 1 less than a minute later for his second score of the first half. Senior quarterback Brenner Cox hooked up with senior Justin Pittman on the two-point conversion to cut the deficit to 17-15.

“We take great pride in our special teams, and Garrett is a big part of it,” Humble said. “He started as a sophomore and is now a junior. He’s a huge weapon. He flips the field and puts it down perfectly on the 1. Big play in the game. He was big all night changing the field for us.”

Rock Hill went 3-for-3 on the night on 2-point conversions.

Villareal booted a 40-yard field goal with 5:26 left in the second quarter to increase Memorial’s lead to 20-15, but it would be the final points of the night for the Warriors. Rock Hill’s defense held Memorial to just three points over the final three quarters.

“Shout-out goes to our staff. Coach (Matt Fitzhugh). Coach (Brad Clark). Coach (Mark Wilkinson). Our whole defensive staff,” Humble said. “They had a great game plan, an unbelievable week of preparation. It showed in the way that our kids played.”

Shannon put Rock Hill ahead for good when he burst 51 yards for his third score of the first half and a 23-20 lead for the Blue Hawks. Senior Luke Knight hauled in a pass on the ensuing two-point conversion.

Rock Hill’s passing game hadn’t done much until that point but finally started to clock late in the third quarter. And it was the combination of Cox and Knight that got the job done for Rock Hill. Knight hauled in a 38-yard pass on the left side of the field, leading to a 21-yard touchdown pass between the two Blue Hawks. Shannon hauled in the 2-point conversion for a 31-22 lead.

In search of a spark, Memorial turned to sophomore quarterback Damarion McPherson.

Using his quick feet, McPherson engineered two drives inside the Rock Hill 30-yard line in the fourth quarter. But neither generated points and Blue Hawks junior Jaxson Davis picked off McPherson on a tip drill with less than three minutes left in the ballgame.