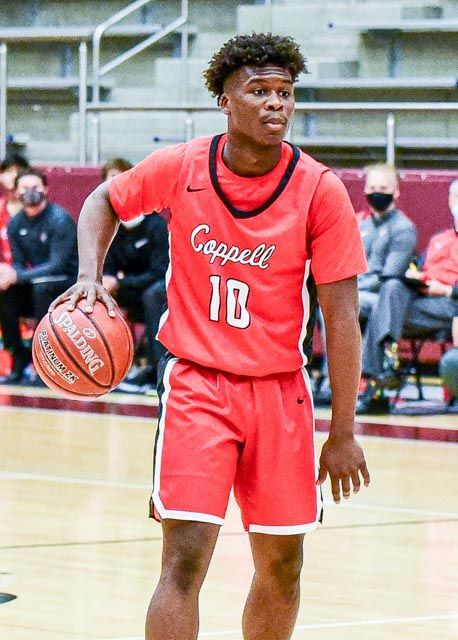 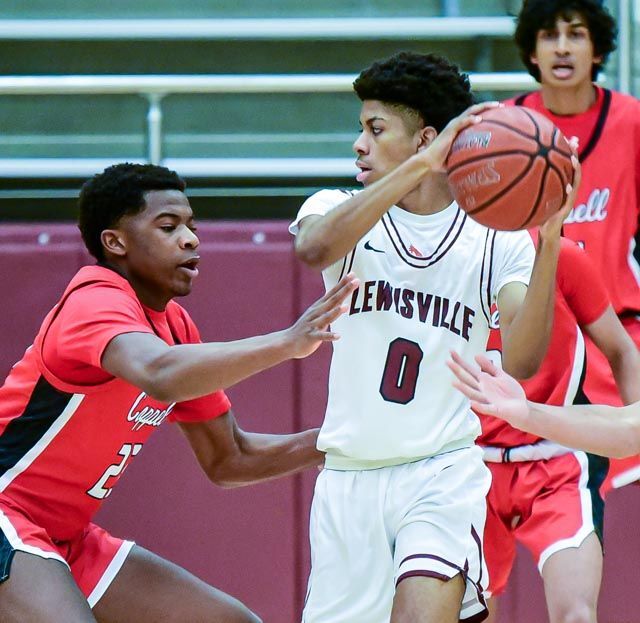 LEWISVILLE – Coppell head boys basketball coach Clint Schnell said earlier this season that his Cowboys have a “target” on their backs.

As winners of back-to-back district titles, the third-year head coach knows that his Cowboys are going to get every team’s best shot. That statement again rang true Tuesday night. Thankfully for Schnell, he had an ace up his sleeve, which came in the form of junior guard Nazir Brown.

When Coppell needed a spark after Lewisville had erased a 17-point deficit to take a one-point lead into the fourth quarter, Brown delivered.

Playing in his first game in this friendly rivalry between the two District 6-6A adversaries after transferring to Coppell from L.D. Bell last summer, Brown scored 18 of his game-high 33 points in the fourth quarter to lift the Cowboys to an 83-73 victory over Class 6A’s No. 16 Lewisville, according to the Texas Association of Basketball Coaches, Tuesday evening.

“The cool part about Naz is that I don’t have to say anything to him,” Schnell said. “He knows when to take over. He knows what he is capable of doing. In moments like that, he’s that kid that rises to the occasion. Tonight, he did that in a big way and left it all out on the court.”

Coppell (8-2 overall, 2-1 district) came out firing on all cylinders, taking a 9-0 lead after a block at the defensive end by the Cowboys led to a Brown putback at the other end of the court with 5:25 left in the first quarter.

Although Lewisville (10-5, 2-1) answered with seven consecutive points to make it a ballgame, the Farmers’ defense had few answers in the early going for the Cowboys, who took a 34-17 lead after a steal and subsequent layup by junior Anthony Black two minutes into the second quarter. Black poured in 22 points.

Unhappy with their defensive performance in the game’s first 10 minutes, the Farmers’ coaching staff made adjustments and Lewisville proceeded to apply more defensive pressure on the Cowboys. The Farmers’ pressure worked, especially against Coppell junior blue-chip recruit Ryan Agarwal. He scored 11 of his 17 points in the first quarter, but didn’t score again until there was 4:40 left in the ballgame.

Offensively, Lewisville used good ball movement to chip away at Coppell’s lead. The Farmers trailed 38-33 at halftime then got a corner 3-pointer from junior Will Curtis as time expired to end the third quarter. Curtis’ basket gave Lewisville its first lead of the game at 55-54.

Curtis, Adrian Banks and Kylin Green each finished with 17 points.

“I was proud of our effort,” said Brian Miller, Lewisville head coach. “Like we told them, we came out in the first quarter not really ready to play and they kind of jumped on us. We didn’t do a good job defensively and gave up 27 points in the first quarter, but then we turn around and won the next two quarters to give ourselves a chance to win.”

However, foul trouble started to mount for Lewisville. The Farmers were whistled for their seventh foul of the second half with 1:36 left in the third quarter.

Brown took full advantage of Lewisville’s foul situation. He went nine-of-10 at the charity stripe as part of his big 18-point fourth quarter.

“I tried to attack as much as I can,” Brown said. “Coach (Schnell) told us that we were in the bonus, and I knew that could make free throws.”

Green, who was playing with four fouls, made an unconventional three-point play with a layup and free throw to cut the deficit to 71-68 with 1:55 left. But, Coppell answered with a running jump shot by Black and a layup by Agarwal to ice the victory for the Cowboys.