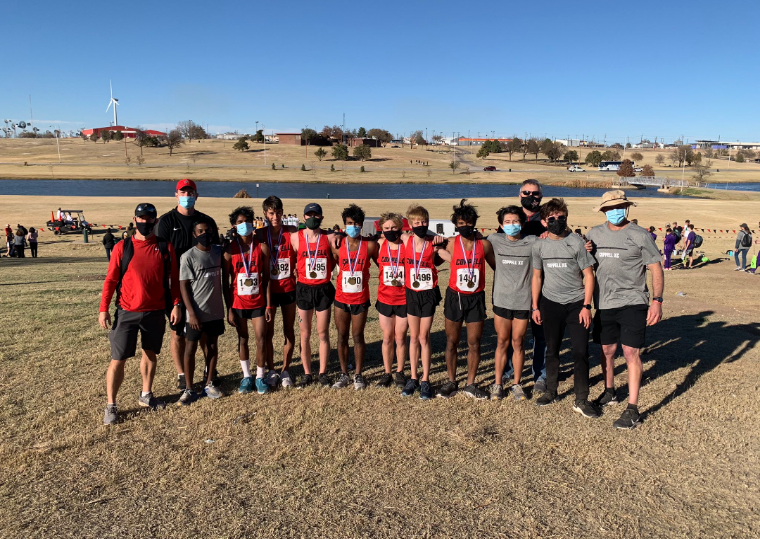 Coppell’s boys cross country team poses for a picture after the Cowboys placed third in the Region 1 Class 6A meet in Lubbock. 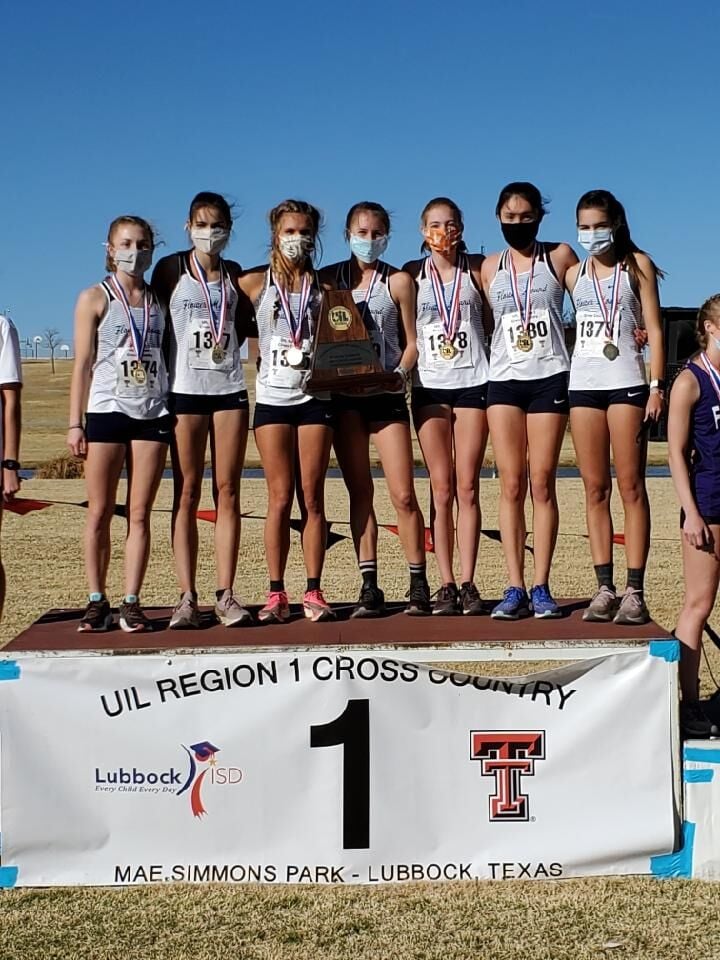 Flower Mound's girls cross country team poses for a picture on top of the podium after winning the Region 1-6A title on Tuesday in Lubbock.

Coppell’s boys cross country team poses for a picture after the Cowboys placed third in the Region 1 Class 6A meet in Lubbock.

Flower Mound's girls cross country team poses for a picture on top of the podium after winning the Region 1-6A title on Tuesday in Lubbock.

LUBBOCK – Coming into this season, Flower Mound head cross country coach Andrew Cook knew that his Lady Jaguars had the pieces to be a championship-caliber team.

Cook said those same athletes for Flower Mound turned in solid individual performances during the spring track season, and with the addition of freshmen standouts Nicole Humphries and Samantha Humphries to the cross country team, he liked their chances of going far this fall.

And on the boys’ side, Coppell head coach Nick Benton knew that his Cowboys had the depth to be in the hunt for the team title, regardless of the meet.

All of the pieces came into place Tuesday afternoon.

The Cowboys, meanwhile, qualified their entire team for the state meet after placing third.

“We thought that we would have a good team,” Coach Cook said. “We’ve had some issues with staying healthy. Now is really the first time that we’ve ran all of those seven girls together in a race this season. They had a great team performance and happy to win in a very competitive region.”

Prosper junior Aubrey O’Connell took the next step to what she hopes is a second consecutive state title, placing second in a time of 18:19.9. Denton Guyer star Brynn Brown ran away with the individual title.

As for Coppell, its depth came through again Tuesday against a field that featured five teams in the top 10 of the Cross Country Coaches Association of Texas.

Senior Evan Caswell put forth another dominant effort, winning the individual title by more than nine seconds. He clocked a time of 15:45.2.

“Evan continues to work really hard. I’m really proud of him,” Benton said. “All of his hard work and dedication is paying off. He’s running very confident right now.”

“Our depth is the reason that we got third place today,” Benton said. “We had a bunch of guys fighting for that fifth spot. Not having the same number five every week is not a bad thing. It’s good to have depth.”

Three Marcus runners have punched their ticket into the state meet. Senior Greyson Gravitt is bound for Round Rock after he placed 11th at the regional meet in a time of 16:21.6. On the girls’ side, junior Austin Owen (eighth, 19:13.3) and senior Payton Evert (21st, 20:01.9) have become state qualifiers.

Plano West junior Hudson Heikkinen will be the lone representative for Plano ISD at the state meet in Round Rock after he ran to 10th overall in a time of 16:20.

Allen freshman Mia McGlade is bound for the state meet after placing 22nd overall in 20:02.