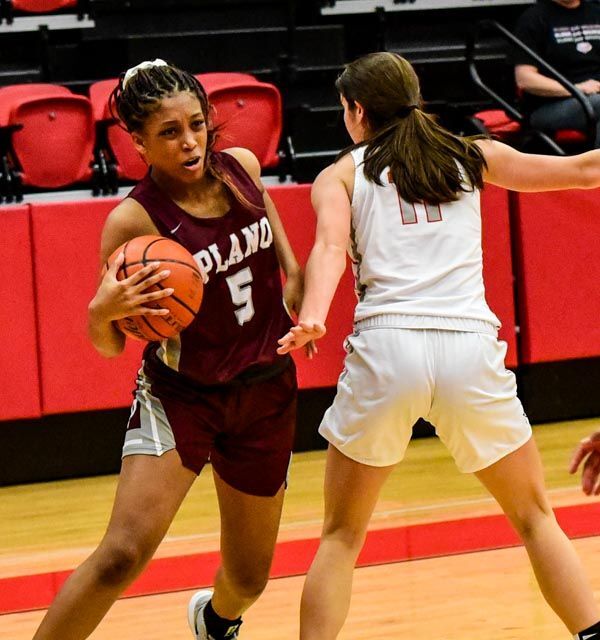 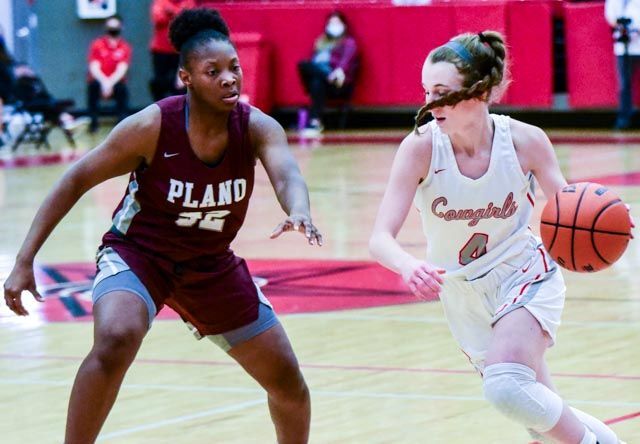 COPPELL — Plano girls basketball coach Kelly Stallings knew that the journey for her Lady Wildcats through the District 6-6A schedule was going to be far from a cakewalk.

In Tuesday’s 58-42 win over Coppell, Plano, ranked No. 7 in Class 6A by the Texas Association of Basketball Coaches, was locked in a defensive battle with the Cowgirls for three quarters. However, the Lady Wildcats used the fast-break to their advantage in the fourth quarter to pull away from the victory.

“District is a whole another level of intensity,” Stallings said. “I told the girls coming in that district is going to be a grind. Every game is a grind from start to finish, and you saw that tonight. The first quarter, both teams were grinding it out. We just kept with it and we’re lucky to come out with a win.”

The biggest difference in the game occurred during the first minute of the fourth quarter. Junior Josie Bruder buried a 3-pointer to ignite an 8-0 Plano run. Freshman Danielle Bennett followed with a steal and layup before adding another layup 16 seconds later to increase what had been a 33-28 lead for the Wildcats after the third quarter to 41-28.

Sophomore Salese Blow played a key role during Plano’s 25-14 fourth-quarter run, scoring 10 of her game-high 18 points during that span, including a pair of free throws to give the Lady Wildcats a nine-point lead with 3:52 left in the game.

Bennett came alive late too, scoring seven of her 13 points during the fourth quarter, including a layup with 3:43 that iced the game for the Lady Wildcats. Senior Amaya Brannon scored seven of her 12 points during the first half and helped to keep Plano’s offense afloat while the rest of the team struggled to find a rhythm against a stingy Coppell defense.

“These girls are veterans,” Stallings said. “There are a lot of seniors and leaders on this team. They know that we just have to continue to play and play through mistakes. You never know when your time is going to be called. Josie stepped up and hit some 3s in the fourth quarter and we started to clean up the boards a little better. We just kept playing with that next-play mentality.”

Coppell sophomore Waverly Hassman scored 11 points during the fourth quarter to give the Cowgirls one final gasp, but 19 turnovers and several missed shots around the basket ultimately did in Coppell.

The loss of junior forward India Howard to a lower-body injury also hurt Coppell. Howard was active on the boards, especially on the defensive end, where she limited the amount of second-chance opportunities for Plano’s offense. She exited the game in the third quarter and had an ice pack that was visible around her right ankle.

Before Howard was forced to watch the rest of the game from the sideline, Coppell’s defense had put the clamps on Plano’s offense. The Cowgirls forced the Lady Wildcats to make several passes before settling for a shot within their half-court offense.

It was a formula that helped Coppell to keep afloat despite some offensive struggles of its own. After the Cowgirls committed their fourth turnover at the 4:28 mark of the first quarter, Coppell head coach Ryan Murphy pleaded with his team, “Guys, you’ve got to take care of the ball.”

Coppell had one field goal through the first 7:02 of the first quarter but only trailed 10-4. Howard and senior Chloe Hassman each proceeded to make a layup to cut the deficit to 10-8. She paced the Cowgirls with 13 points. Howard chipped in seven points.

Chloe Hassman scored five straight points midway through the second quarter to give the Cowgirls their largest lead of the game at 16-12, but Plano senior Avery Foltz and Bennett answered with 3-pointers as part of a 12-3 run to give the Lady Wildcats a 24-19 halftime lead.