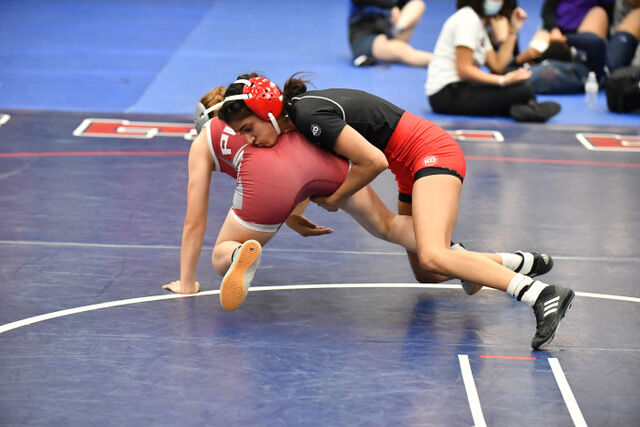 Coppell’s Maria Husein turns an opponent onto her back. Husein captured first place at 95 pounds in the District 6-6A wrestling tournament at Allen High School. 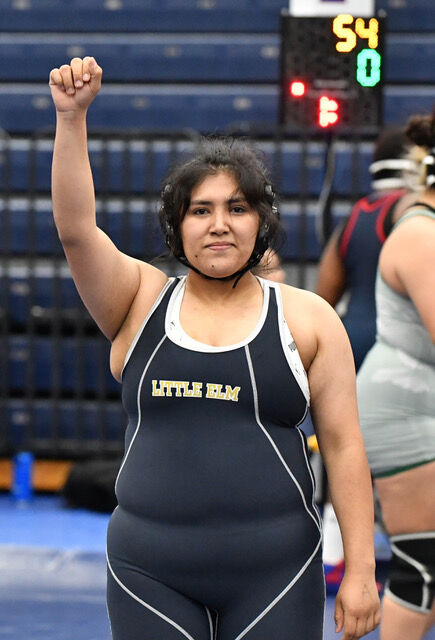 Coppell’s Maria Husein turns an opponent onto her back. Husein captured first place at 95 pounds in the District 6-6A wrestling tournament at Allen High School.

The Eagles captured 11 individual titles and all 14 wrestlers that competed for Allen punched their ticket into this week’s Region II-6A Tournament, which like the district tournament, will be held in the Eagles’ home gymnasium.

But, for as much as Allen dominated the boys division, it was a much closer battle on the girls’ side. Coppell squeezed out 111 points, edging runner-up Prosper’s 101. Allen finished third with 99.

Coppell is also sending two male wrestlers to the regional tournament in Jo’el Hernandez (120) and Jackson Moss (138), both of whom wrestled to bronze.

Plano ISD will also be well represented at the Region II tournament.

Crosstown rival East had six wrestlers earn berths into the region tournament, including five on the boys’ side. Aariz Habib (113) and Peyton Madawi (220) captured second place, while Logan Atchley (106), Benjamin Lamp (170) and Tory Strickland-Byrd (182) earned third overall. The Lady Panthers have one regional qualifier in Bailey Turner, who placed third at 119.

Plano’s Melanie Valdez (95) and John Jabel (106) wrestled to second in the girls’ and boys’ divisions, respectively, while Dayton Walker (152) is bound for regionals after earning third place.

One of the most pleasant surprises at the district tournament was Little Elm.

The Lobos, in their first year as a varsity wrestling program, received first-place finishes from Kaycee Bolle (165) and Andrea Hernandez-Robledo (185) and six overall regional tournament qualifications. Emily Pedro (128) and Brettney Pedro (148) took third. On the boys’ side, Jax Brown wrestled to silver at heavyweight, while Brandon Kirk took third at 126.

Prosper turned in some solid individual performances. John Richardson (160) captured a title on the boys’ side, while Taylor Martinez (138) wrestled to a first-place finish in her weight division.

It was all part of a big weekend for the Eagles, who advanced 12 wrestlers to the regional tournament.

Joining Martinez at regionals for the Lady Eagles will be Kathryn Hall-Smith (119), Ashley Vogelpohl (165) and Delia Luna (185), all of whom placed second, as well as third-place finishers Lauren Garst (102) and Alyssa Galindo (215).