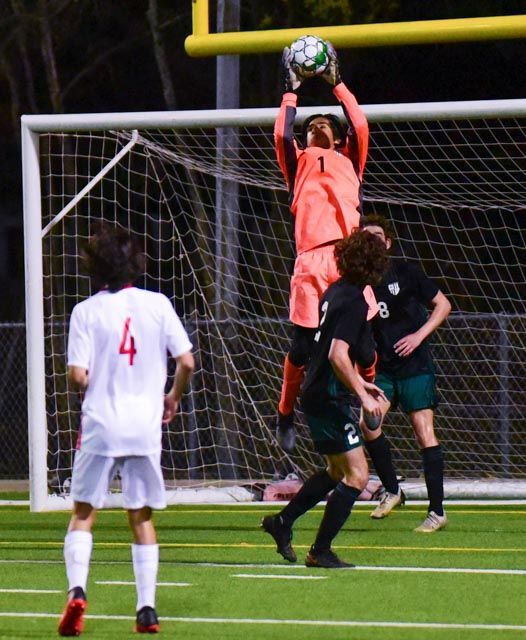 Prosper senior keeper Anthony Lozada reaches up to make a save during Friday's Class 6A bi-district playoff against Coppell at Bronco Field in Denton. Lozada made a diving save on a penalty kick in the first half. Prosper won, 3-1. 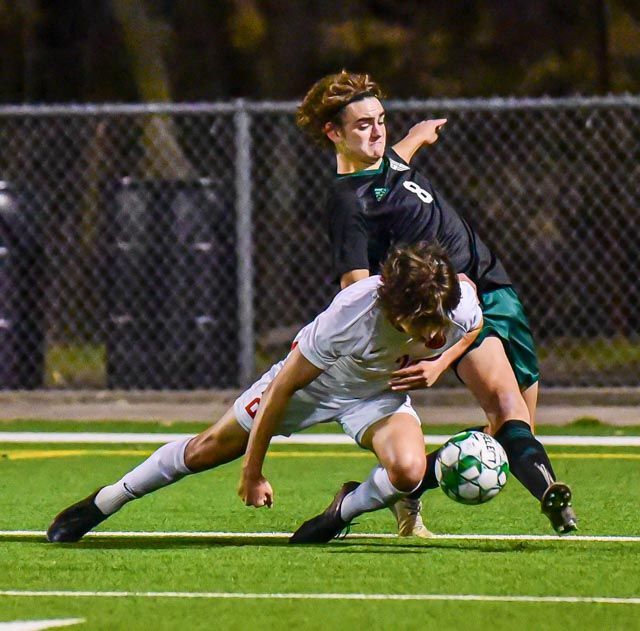 Prosper senior keeper Anthony Lozada reaches up to make a save during Friday's Class 6A bi-district playoff against Coppell at Bronco Field in Denton. Lozada made a diving save on a penalty kick in the first half. Prosper won, 3-1.

The Cowboys were presented with numerous scoring chances, but just couldn't kick anything past Prosper senior keeper Anthony Lozada until late in the second half of Friday's Class 6A bi-district playoff at Bronco Field.

Lozada as well as Prosper's center backs kept Coppell's offense at bay in a season-ending 3-1 loss.

“It’s tough to say enough good things about Anthony,” said Ryan Rogers, Prosper head coach. “He’s been fantastic for us all year and he showed up tonight. I’m proud of him.”

Prosper junior Gavyn Rosales scored in the seventh minute to give the Eagles a 1-0 lead. Dunes Nielsen, a junior, held possession of the ball and spotted Rosales coming down the middle of the field. Rosales blasted the ball past Coppell freshman goalie Jacob Campbell.

Coppell had a chance to tie the scored midway through the first half.

Junior Walker Stone was awarded a penalty kick after being fouled. He stepped up to the line and took the shot. Lozada read the play perfectly. He guessed left and made a diving save. There was a rebound, but the Cowboys kicked the ball wide.

It was the first playoff game for Lozada, who, like his Prosper teammates, didn’t get to make an appearance in the postseason last year as the COVID-19 pandemic cut their season short. Now, the Eagles are bound for the area round for the first time since 2017.

“When I woke up, I was happy,” Lozada said. “Thirty minutes before game time, my stomach started to sink in and I needed a little more water. Once the first whistle blew, I kept my energy up and stayed focused the whole game.”

Coppell had plenty of chances to score. But, many of those opportunities were saved by Lozada or pushed wide of the goal. Senior Brandon Gast tried to will his team to victory, but was denied time and time again.

That was until late in the second half.

Gast finally gave Coppell its first goal with just over 10 minutes left in the second half. But, the Cowboys trailed 3-1.

“He had two or three saves where, talking to the other coach, we both thought that it was a goal,” said James Balcom, Coppell head coach. “The stuff we worked on this week, it came out during the game. You can’t really ask for anything more. A lot of our losses this year were very similar. We’ve been putting a lot pressure on the other team. At the end of the day, you’ve got to finish your opportunities. Tonight didn’t go our way.”

Prosper put away the game with two goals in a three-minute span early in the second half.

Nielsen flipped a pass to Brock McMurry inside the box. McMurry put his foot on the ball and hit a laser into the back of the net for a 2-0 Eagle advantage with 32:36 left in the match.

Nielsen made another perfect service to set up Prosper’s third goal. He lofted a free kick from 25 yards away to the foot of freshman Stetson Buttrill. Buttrill redirected the pass into the net for a commanding 3-0 Eagle lead.

Prosper (11-6-3) advances to face Richardson Pearce in the area round, set for 7 p.m. Tuesday at Neil Wilson Stadium on the campus of Flower Mound High School.

Coppell's season came to an end Friday. The Cowboys (12-9-3) qualified for the postseason for the 24th consecutive year and finished second in District 6-6A.

“We had some ups and downs this year, but we knew that District 6-6A was going to be tough,” Balcom said. “We knew Plano was going to be tough. Flower Mound was returning a couple of great players. Marcus has been up there for a while. For us to get second for three or four years is nice. Obviously, you want to get that district championship. But for us to get second in any of these kinds of districts speaks a lot about our team.”