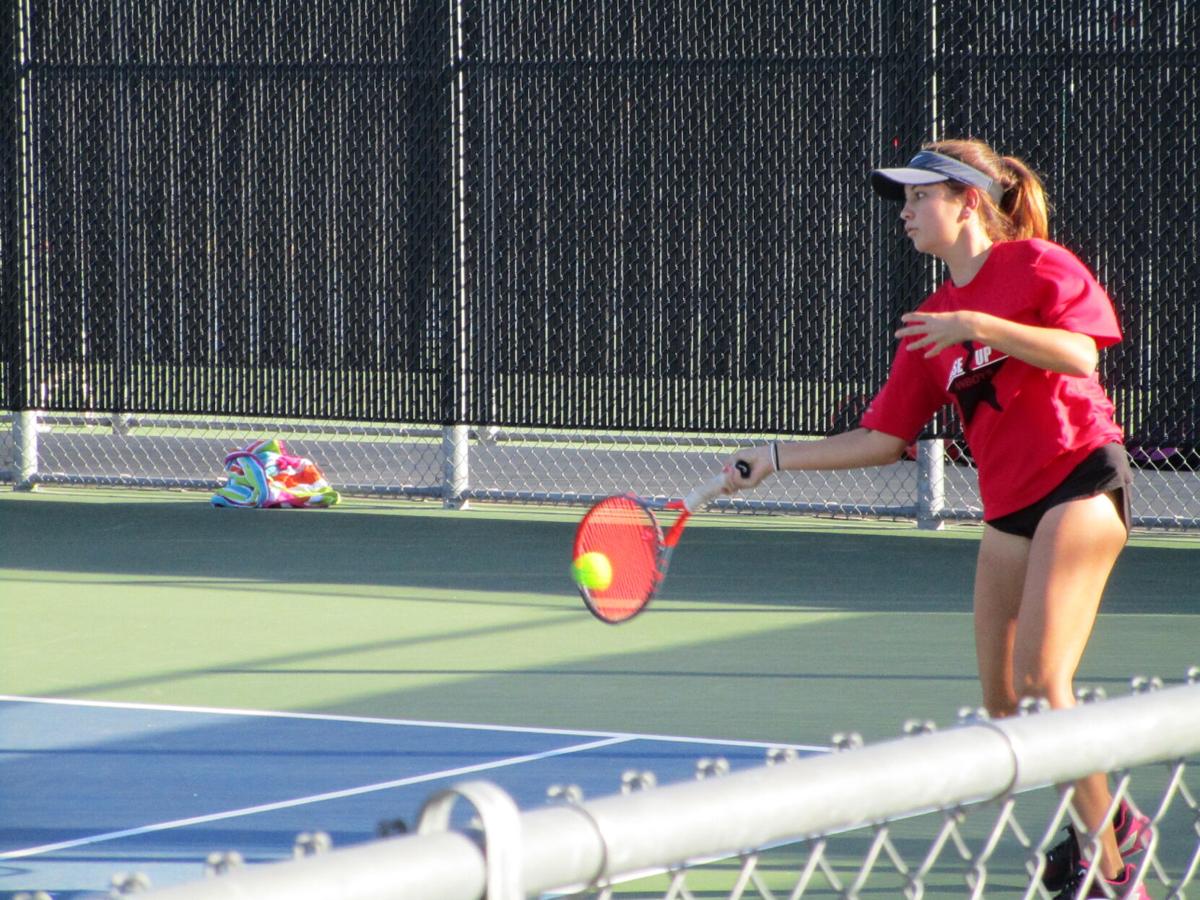 Coppell junior Lindsay Patton returns a backhand shot during a match in mixed doubles against Flower Mound on Tuesday. 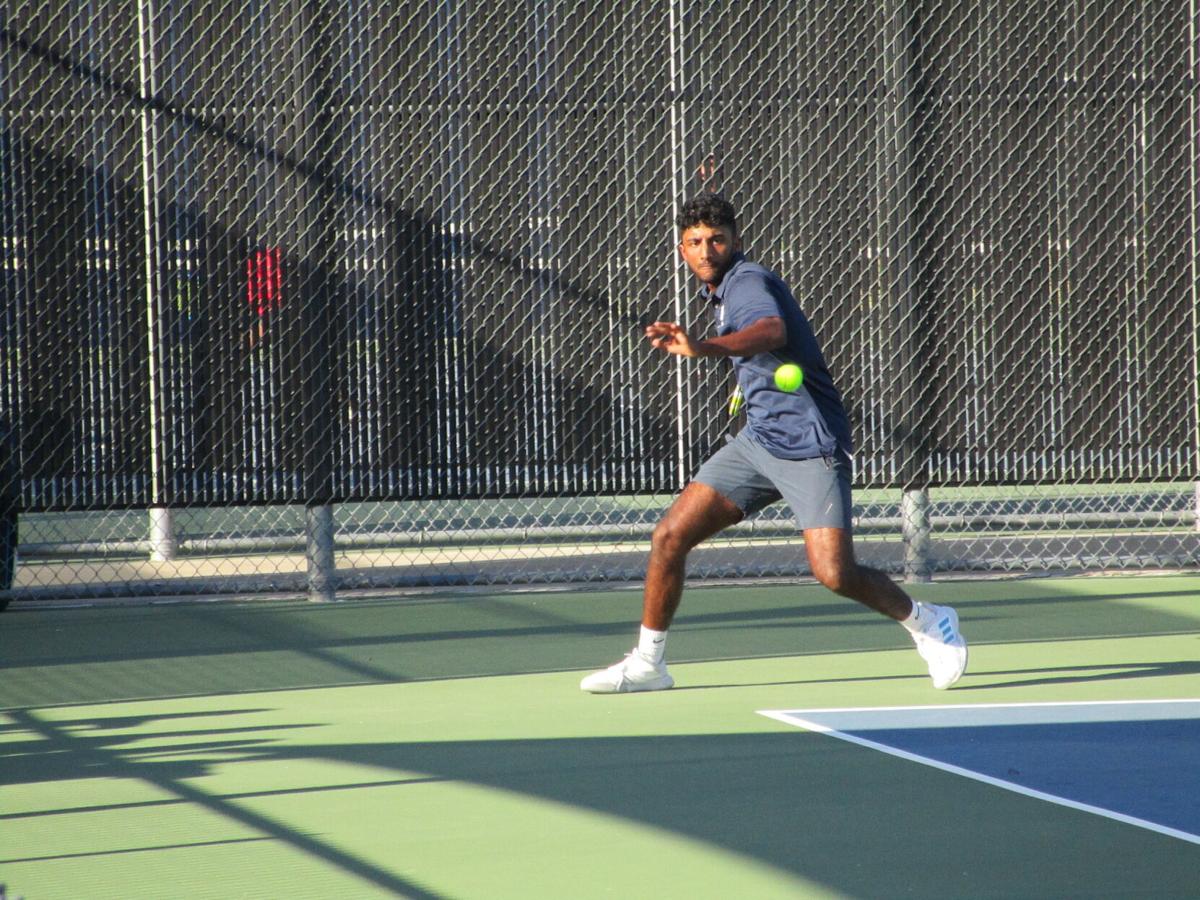 Coppell junior Lindsay Patton returns a backhand shot during a match in mixed doubles against Flower Mound on Tuesday.

FLOWER MOUND – In a dual that would determine which team would clinch third place in District 6-6A and the other fourth place, Coppell freshman Sarayu Thallpareddy relied on previous experience to prepare for her match against Flower Mound freshman Arya Srivastava.

Earlier this season at a tournament, Thallapareddy defeated Srivastava in a third-set tiebreaker. But on Tuesday, Thallapareddy admitted that she felt a little more pressure. That’s because the score of the match between Coppell and Flower Mound was tied 9-9. And it was the final game of the dual between the two schools.

“I’ve played this girl before and it was quite a bit of pressure because last time I beat her really close,” Thallapareddy said. “I was just trying to keep the ball in and I wasn’t sure it was 9-9. I thought that we were down the entire time.”

Thallapareddy handled the pressure well, downing Srivastava in straight sets with a pair of 6-2 victories to clinch a 10-9 win for Coppell. The victory clinched third place in District 6-6A for Coppell. Flower Mound, also bound for the playoffs, finishes in fourth place in the standings.

“Sarayu was like a rock,” said Rich Foster, Coppell head coach. “As a freshman, that match will serve her well as an experience in how to handle pressure.”

Flower Mound had all of the momentum early on Tuesday as the Jaguars won five of the seven doubles matches to take a 5-2 lead into singles play. The Jaguars received straight-set victories from Grant McHenry and Landon Bair at No. 3 boys doubles (6-1, 6-2), Sara Crawford and Madhav Badithela at mixed doubles (6-3, 6-4).

Lahari Guduri and Jenny Kim overcame an early challenge by Coppell to rally for a 3-6, 7-6 (4), 10-7 victory at No. 3 girls doubles. The team of Alex Scannicchio and Arya Srivastava also had their hands full but found the winning formula in the third-set tiebreaker to escape with a 6-4, 3-6, 10-8 win at No. 2 girls doubles. Meera Sengottiyan and Divya Phalak won in straight sets at No. 1 girls doubles (7-5, 6-2).

“I felt that the overall team did a great job in executing our doubles strategy as we were able to get up 5-2 after the doubles, which helped give us some much needed momentum going into singles,” said Wade Zimmerman, Flower Mound head coach. “We knew that Coppell would be a tough matchup in singles and it would come down to a few matches.”

Indeed, it came down to a few matches.

And it was two wins by Coppell in girls singles that proved to be the difference. In addition to Thallapareddy’s victory at the No. 4 line, Lucky Parasuraman delivered at No. 3 singles with a pair of 6-3 wins over Scannicchio.

Another big reason behind Coppell’s come-from-behind victory over Flower Mound was the play of the Cowboys in boys singles. Coppell won all six matches in that division with Cason Cole cruising to a pair of 6-0 shutout victories at the No. 3 line.

Vinay Patel had the toughest challenge. But Patel shook off a sluggish start to rally for a 2-6, 6-3, 14-12 win at the No. 1 spot. Ishaan Dhandapani, Sayon Nath, Ricky Koshimizu and Shay Patel also earned wins for Coppell.

Coppell will face Prosper for the second straight year in bi-district. The Cowboys won last year’s meeting, 10-2. Tuesday’s match will start at 3:30 p.m. at Prosper. District 5-6A champion Allen will host Flower Mound that same day at 4:30 p.m.

“They are a solid team, probably about the same level as Flower Mound,” Foster said of Prosper. “We are in for a battle. We can't afford to fall behind in doubles again.”