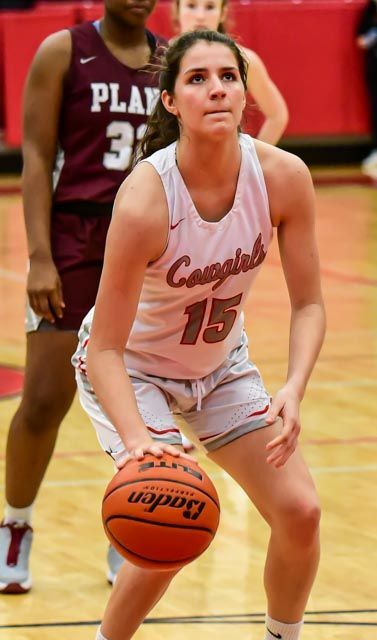 Coppell senior Chloe Hassman and sophomore Waverly Hassman (not pictured) are eager to lead the Cowgirls to a playoff berth in their final season playing high school basketball together. 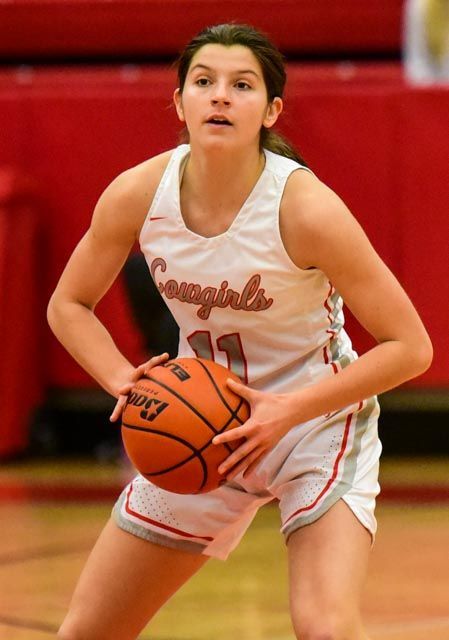 Coppell senior Chloe Hassman (not pictured) and sophomore Waverly Hassman are eager to lead the Cowgirls to a playoff berth in their final season playing high school basketball together.

Coppell senior Chloe Hassman and sophomore Waverly Hassman (not pictured) are eager to lead the Cowgirls to a playoff berth in their final season playing high school basketball together.

Coppell senior Chloe Hassman (not pictured) and sophomore Waverly Hassman are eager to lead the Cowgirls to a playoff berth in their final season playing high school basketball together.

Coppell sophomore guard Waverly Hassman was bummed that she didn’t get to play all of her freshman season with her older sister, Chloe.

A stress fracture that Waverly had suffered during the preseason and limited her to two district games was one of several injuries that hampered Coppell’s girls basketball team during the 2019-20 season. The Cowgirls went on to finish with an overall record of 18-17, but just 5-9 in district play.

Forward India Howard, now a junior, missed several games due to a concussion before finishing the season strong to earn a spot on the 6-6A all-district second team after averaging 5.0 rebounds, 4.5 points and 1.0 steals per game.

Despite the setback, Waverly utilized the time to become a student of the game. She watched games from the team’s bench and in particular paid attention to watching her older sister Chloe, one of the few players on the team to stay healthy for a majority of the season. Waverly would take away any observations of watching Chloe play live and break it down during film study.

“Chloe was our top scorer all the time last year,” Waverly said. “She has a really good game. So, yeah, I was learning a lot from her. I play the game a little bit differently. I'm more of a ball-handler, but my coach always tells me that I need to do a little of both. So, I'll watch film of Chloe and figure out what she's trying to do and how I can mimic it.”

Chloe had a breakout season as a junior after spending each of her first two seasons in a reserve role for the Cowgirls, going on to average team highs in points (11.2) and rebounds (5.2) to earn a nod on the all-district first team.

Chloe credits her improvement to the hard work that she put in with her club team, Higher Goals – an AAU team where she was a teammate with her older sister Rowan, a 2019 Coppell graduate who is now a distance runner for Bates College, located in Lewiston, Maine. Rowan and Chloe played for Coppell’s varsity basketball team for two seasons. Now, it’s Waverly’s turn to play with Chloe.

"Playing with Rowan was fun,” Chloe said. “I was smaller. I was a guard my freshman and sophomore seasons. She was always a post player. Those first two years were hard for me. I didn't absorb that prominent role like Waverly has now. It was a struggle for me to get up there, but I just kept pushing and pushing."

One of Chloe’s favorite moments as teammates with Rowan came in 2018, when they helped to lead Coppell to the Class 6A state title in girls cross country, with Chloe placing 26th overall and Rowan six seconds behind her in 31st.

In 2019, Chloe and Waverly sparked the Cowgirls to a fourth-place finish as a team in the state meet. In February, Chloe ran to a new school record in the girls’ 1,600-meter run. She is a Penn commit.

Running in the Hassman family isn’t limited to Chloe, Waverly and Rowan.

Though the Hassmans have running in their genes, they have played other sports. Their father, Jeff, first introduced them to basketball and soccer at a young age.

Jeff set up a basketball goal at their places of residences – first in suburban Philadelphia before the family relocated to Texas in 2016 – and the fundamentals, from the most basic to the more advanced, were taught from the very beginning.

"We had a goal and my dad was teaching us how to set screens, so we were trying to learn how to roll the right way and we always messed it up,” Waverly said. “My dad played sports in high school and so did my mom. They just had fun with it when we were little.”

Waverly first started playing AAU ball in third grade and is currently playing for True Texas Hoops in addition to being a starter for Coppell’s girls varsity basketball team.

After an injury-plagued freshman season, she is asserting herself as a go-to player for the Cowgirls. In the team’s Nov. 6 season opener against Southlake Carroll, Waverly converted a layup with 2.6 seconds left to lift Coppell to a 30-28 win over the Dragons. She finished the game with 11 points, seven rebounds and three assists. Waverly’s season high for points has been 23, which came in a 70-58 loss to Winnsboro on Nov. 28.

Coppell entered Friday’s game against Hebron with an overall record of 5-5 and a district mark of 1-2.

"It's been a little rocky since our team is a little young,” Waverly said. “We only have four seniors and we got hit with COVID-19. It's been really weird, but I think that we're pulling together.

“Last year, we had a lot of injuries. I had a stress fracture. Another girl hurt her foot. We had a lot of concussions. There were a lot of us out. But now, we've got a pretty full bench. We have seven people that we rotate through every game. We're trying to gel together. It's so early. But, I think that if we tweak a few things, everything will come together."

Chloe, meanwhile, is picking up where she left off at the end of her junior season. She scored a game-high 20 points on 7-of-12 shooting to accompany five rebounds and three steals in the Cowgirls’ 58-42 loss to Class 6A’s No. 5-ranked Plano on Dec. 8.

"I'm here to have fun but I also know that we have a lot of younger girls who want to play in college,” she said. “These are their goals. It's my job not only to do well for the team but to give these girls as many opportunities as possible on the court and help to lead."

Though she has been tagged with a leadership role, Chloe also wants to make one final run at a playoff berth with Waverly before she heads off to college in her native Pennsylvania following the spring track and field season.

"I knew that Waverly was already a good player and that she was going to take a big part on the team,” Chloe said. “Her freshman season kind of set that back. She bounced back after the year ended abruptly. She was already working hard in the summer, so I knew that she was ready to step up. I was excited to work with her. We've got that sister telepathy working."