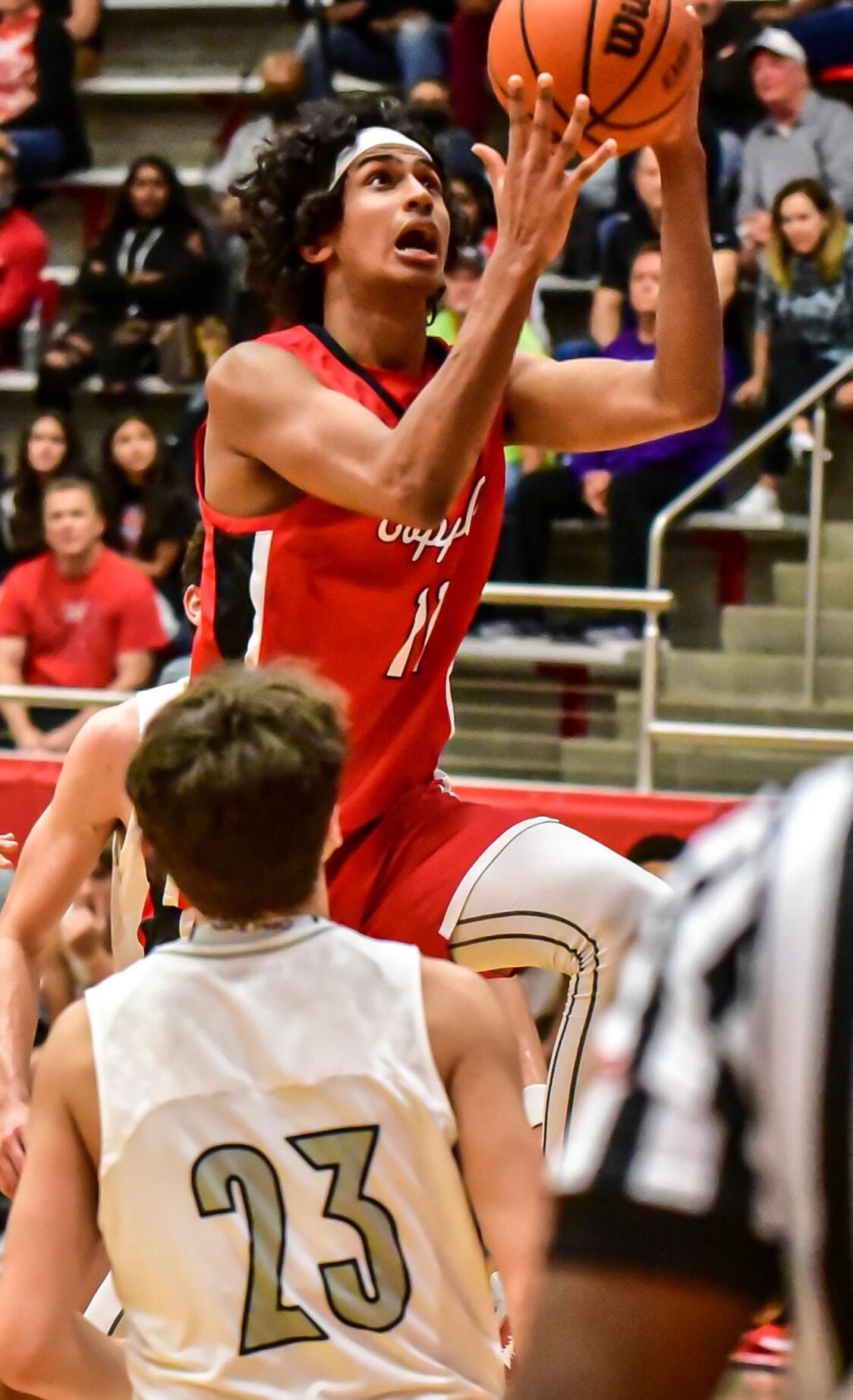 Coppell senior Ryan Agarwal goes up in the air for a layup during Friday’s District 6-6A game against Flower Mound Marcus. Agarwal led the Cowboys with 17 points. 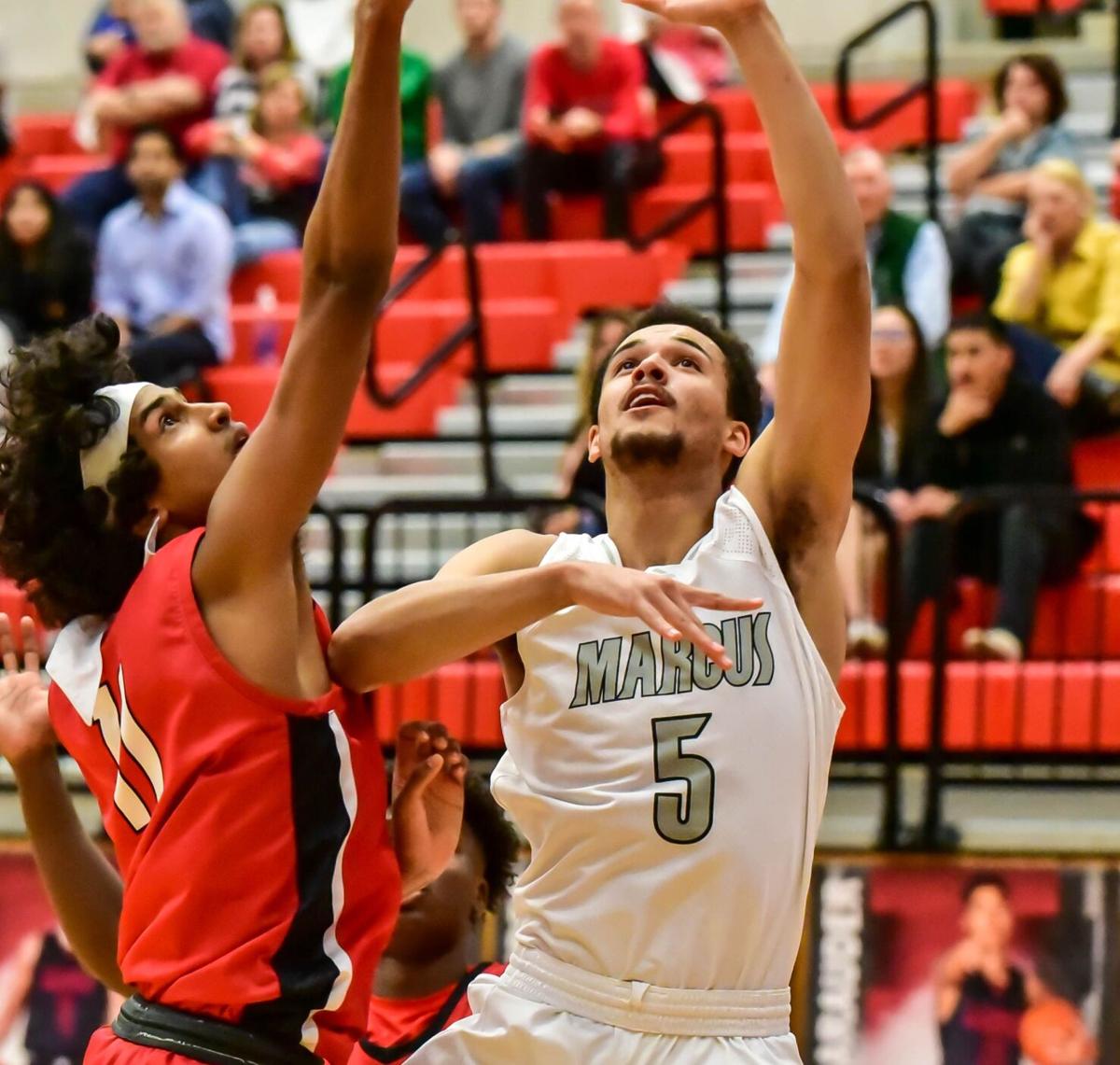 Coppell senior Ryan Agarwal goes up in the air for a layup during Friday’s District 6-6A game against Flower Mound Marcus. Agarwal led the Cowboys with 17 points.

FLOWER MOUND – The Coppell boys basketball team is built around seniors Devank Rane, Nazir Brown and Ryan Agarwal. But the Cowboys might have found the future of the program in sophomore Arhan Lapsiwala.

Lapsiwala scored the first eight points of Friday’s District 6-6A opener against Flower Mound Marcus on the power of two 3-pointers and a pair of free throws, then helped Coppell distance from the Marauders in the second half in a 60-51 victory. He scored 16 points in the win.

“Great kid,” said Clint Schnell, Coppell head coach. “Arhan comes from the same cloth as those three. I guess that he’s the next era of our program. But a sophomore getting thrown into the fire in our first district game, he played like it was his 20th district game. He’s a confident kid. He expects to be coached hard. He wants to be held to a high standard, and when a kid wants to do that, it’s great.”

With the win, Coppell avenged only one of two losses last season on its way to sharing the district title with Marcus. The Marauders defeated the Cowboys 45-38, also in the Marauder Activity Center. But Friday’s outcome was decided early on.

Going in the direction of the Marcus student section to tip off the game, Lapsiwala was not intimidated by the magnitude of the game. He buried two corner 3-pointers then made two free throws after being contacted by a Marcus player on another 3-point attempt as Coppell (12-6 overall, 1-0 district) took an early 8-0 lead.

“It was great,” Lapsiwala said. “Ryan and Naz were telling us sophomores that it was going to be big, a big crowd, a lot of energy. Just these district games and looking at the crowd, it was fun. I am a shooter and I am confident. Once it goes in, it keeps going.”

Lapsiwala wasn’t the only sophomore that played a key role for Coppell in Friday’s game. Alex Tung made a pair of 3-pointers on his way to finishing with six points. The Cowboys made eight 3s as a team.

And for as well as Coppell started the game, it was the complete opposite for Marcus (11-4, 0-1).  The Marauders committed three turnovers in the first three minutes and scored just nine points in the first quarter.

“We had some uncharacteristic turnovers and mistakes, and when you compound that with not shooting it very well, especially from the outside, you’re going to be in a deficit,” said Shane Rogers, Marcus head coach. “We had to crawl out of a deficit and we just weren’t able to.”

In search of an offensive spark, Marcus got it from senior Luke Smith. Smith caught fire in the second quarter, scoring 10 of his game-high 24 points, including a play in which he blocked a shot at one end of the court and finished a layup at the other.

“Luke is obviously one of our better players,” Rogers said. “We need Luke to perform at a high level for us to be as good as we can be, especially against Coppell, who is probably one of the other top teams in the district. I thought that he did a good job of bouncing back in the second quarter from a bad start.”

Smith’s clutch shooting helped Marcus to rally to a one-point lead late in the second quarter, though Brown made a straightaway 3-pointer in the final minute of the first half to give Coppell a 25-23 lead at intermission.

Coppell started the third quarter strong, and again, it was Lapsiwala that provided the spark. He poured in eight more points in the first 1:57 of the quarter to increase the Cowboys’ lead to 35-25.

“We’ve talked about it to the guys that with our schedule, teams are going to make runs,” Schnell said. “No lead is safe. You’ve got to keep being disciplined. We knew that Marcus was going to fight. They’re a great team. They’re well-coached. We had to overcome their runs with ones of our own and had to make smart decisions. They did that.”

Marcus continued to hang around, but a pair of one-handed dunks by Agarwal, a Stanford signee, in the final couple of minutes of the ballgame allowed Coppell to polish off the victory. He led the Cowboys with 17 points.

Get the Coppell Gazette in your inbox!