Frisco City Council members have elected to dismiss four ethics complaints that were filed against Mayor Jeff Cheney and one that was filed against Councilman John Keating.

Frisco resident Sarah Rouse filed multiple allegations against Cheney including that he and his wife “hosted a keg party for underage children at his home.” Rouse also accused Keating of inappropriate conduct in a social media photo.

The city’s response to the complaints came in the form of agenda items during the July 6 regular City Council meeting. According to the city’s ordinance regarding ethics complaints, after receiving the complaint, the city attorney will make an initial assessment of the complaint and, under the assumption that the allegations are true, decide if the alleged facts constitute a violation of ethics laws in the ordinance.

After the initial assessment, the city attorney must meet with the City Council at its next regular meeting to submit a written report describing the complaint and the assessment. The report is made in executive session if the law allows, according to the ordinance.

During the public portion of the meeting on July 6, Cheney said the ordinance requires statements of facts rather than allegations.

The Frisco Enterprise, through a public information request, has received access to the affidavits signed by Cheney.

The unanimous decisions to dismiss the complaints, made by the non-implicated council members, came after an over three-hour executive session that was closed to the public. Mayor Pro Tem Bill Woodard said the lengthy closed session had been in part due to a significant amount of time that was spent on the complaints.

Rouse, in one complaint, alleges that Cheney and his wife “hosted a keg party for underage children at his home” and alleges that his 18-year-old son posted video footage of the party on social media.

“Blatant disregard for the law and participating in illegal activity is not the manner in which the mayor of the city of Frisco should be conducting himself,” Rouse stated. “Refusal to address the obvious illegal activity is concerning to the public and simply unacceptable.”

In a sworn affidavit, Cheney listed multiple reasons the complaint should be dismissed, including that the complaint doesn’t provide a required statement of facts.

“Ms. Rouse fails to do that and instead provided a statement of opinions, assumptions and allegations for her basis of the complaint, none supported by facts or evidence,” Cheney stated. “A blog written by a political opinion source known for targeting elected officials is not a source of facts. The facts are contrary to her claim.”

In another complaint, Rouse alleges that Cheney violated the ethics code by using a city email to ask city department heads “pointed political campaign questions” with regard to City Council candidates they had met with.

“None of the responses shared were as a result of my city email, so the complaint is factually false,” Cheney stated in a sworn affidavit. “City staff was not asked a political question nor were they asked to support a political candidate.”

In two separate complaints, Rouse insinuated potential conflicts of interest for Cheney with regards to city deals involving the PGA of America and the Dallas Cowboys franchise. In sworn affidavits, Cheney stated he had no financial interest in either deal, adding that the complaints are based on opinions, assumptions and allegations.

“As I disclosed in my personal financial statement filed with the city secretary, I do not have any financial interest in the PGA project in any way including Omni Stillwater Woods or any other entities mentioned in this response,” Cheney states. “The only financial interest I have in any real estate is my personal home and a rental property I have owned for many years.”

On July 6, City Attorney Richard Abernathy said an assessment had concluded that the complaint didn’t allege facts sufficient to constitute a violation of the ethics laws. He also said Cheney’s affidavits had not been reviewed or considered by the city attorney’s office.

During the meeting, Councilwoman Shona Huffman said in the future filed complaints must have real evidence or proof to support any claims.

“The ethics ordinance is not designed to be a political sword on any side, and it should be deemed a tool when such egregious violations with sufficient proof have occurred,” Huffman said.

“I feel confident that based on evidence we’ve seen, questions we’ve asked and just general observations, we were transparent,” Livingston said. “There may be things you don’t like, there may be things I don’t like, but that doesn’t constitute an ethics violation as our ordinance is read.” 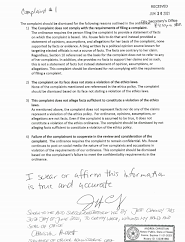