A man confronts protesters May 2 at the intersection of Preston Road and SH 121. 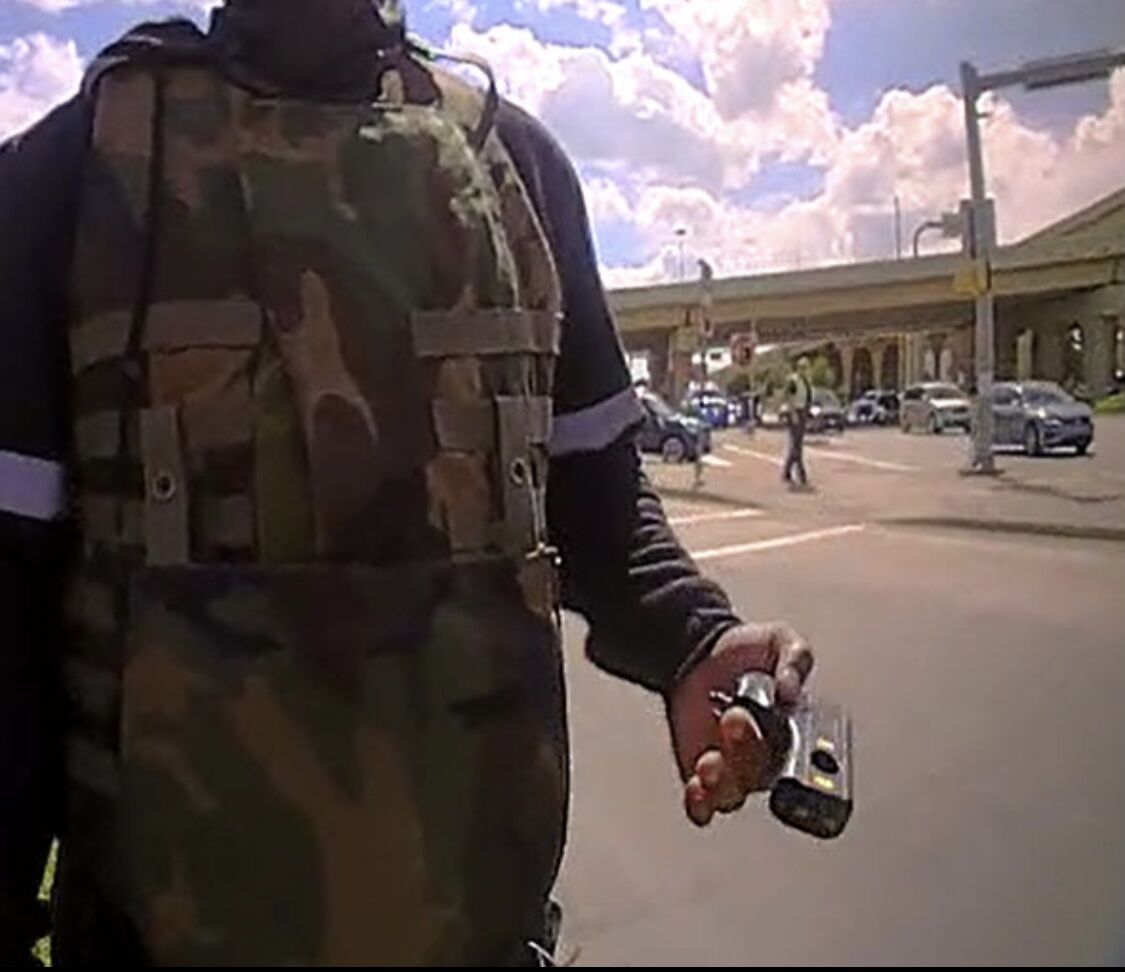 Plano Police on Monday clarified that what appears to be a firearm aimed at a man during a viral protest incident was an electronic control device aimed at a male in an effort to protect a female from further assault. The man holding the device did not commit a criminal offense, police said.

The Plano Police Department announced Monday that a charge has been filed against a man who was recorded on video aiming to knock a phone out of a woman’s hand during a protest.

The protest, which occurred on May 2, garnered much attention over the weekend as footage and commentary accumulated on social media.

According to Officer David Tilley of the Plano Police Department, who spoke with Star Local Media on May 3, a protest was organized to take place on May 2 in Frisco. One woman who attended the protest said it was in support of the family of Marvin Scott III.

Tilley said Frisco police blocked off a lane of traffic so individuals could protest safely, but he said a group of protesters made their way onto an unblocked lane, causing traffic problems. Tilley added there were no plans for the protest to spill into Plano.

According to a statement that the Plano Police Department issued on Monday, an officer was called to the intersection of Preston Road and SH 121. Officer David Tilley of the Plano Police Department said the call came to the department as a “traffic hazard” call with a possible crash, and that the caller had mentioned a possible traffic light malfunction. The department said only one officer had responded to the call because of a “heavy call volume.”

According to the department’s Monday statement, around 50 protesters were in and around the roadway, and the officer called for backup to respond as soon as possible.

While traffic was blocked, one man got out of his vehicle and confronted the crowd, according to a video taken at the scene and provided to Star Local Media.

The resident who sent the video claims the man who confronted the protesters first got in the officer’s face, yelled at him and pointed his finger in his face. The resident said the officer remained calm at that moment.

She said the man then took a swipe at a woman in an effort to knock her phone out of her hand, and then when a group of protesters approached the man he pushed one of them, which she said was local attorney Lee Merritt.

The woman claims the police officer didn’t intervene other than to talk calmly to the man, saying, “please sir, calm down.”

The woman questioned why police didn’t arrest the man who was confronting the protesters.

“The officer's trained to deal with situations like that, and he took the best course of action that he felt appropriate at that time,” Tilley said May 3.

According to the Plano police statement, during the incident, a female reported that she was “assaulted by a male who confronted the protesters."

“Due to the position of the crowd, the officer did not witness the assault,” the department stated. “The officer de-escalated the situation by removing the male away from the crowd.”

After the officer later completed an offense report, the Crimes Against Persons Unit followed up on it the next day, the department stated. According to the statement, the female victim said the man had slapped her hand in attempting to knock her phone from her hand. While she said she was not injured and that it did not hurt, the woman did say she felt threatened by the male’s actions.

“After speaking with the victim and the suspect, and reviewing video footage of the incident, detectives filed an assault-by-contact charge with the Municipal Court against the male suspect,” Plano police stated.

The department also addressed allegations that one of the protesters had pointed a gun at the male suspect who confronted the crowd.

“These reports are false,” the department stated. “A protester pointed an electronic control device at the male subject in an effort to protect the female from being further assaulted by the male.”

The department added that officers on scene confirmed the device was not a firearm.

“Electronic control devices can be purchased without a permit or license, and the person who pointed the device did not commit a criminal offense by doing so,” the department stated.

The department added that there were no injuries or property damage during the incident and that nobody had pointed a firearm at anyone.

“The officers’ priorities were to de-escalate the situation and clear the roadway,” the department stated. “The roadway was clear, and traffic was moving in approximately seven minutes after the first officer arrived. It is regrettable that so many people have falsely reported on this incident over social media.”

This story has been updated to include additional information provided by David Tilley of the Plano Police Department.

The male was black, and the assault(class c misdemeanor, essentially just a ticket) was against a white woman?

It would be A Shame to allow Plano or Frisco to be manipulated by blm/antifa folks, like Portland, NYC, etc, etc. Blocking a public street is against the law, and we all know that you don't negotiate with criminals.