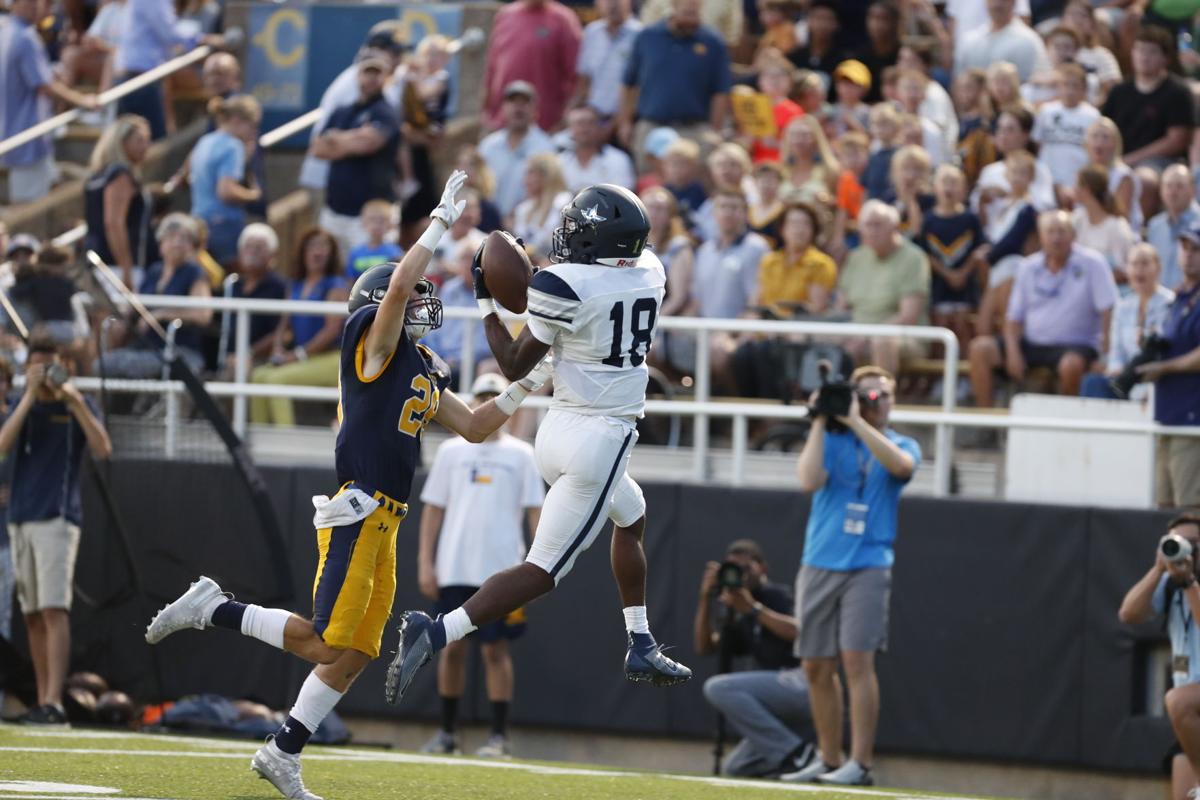 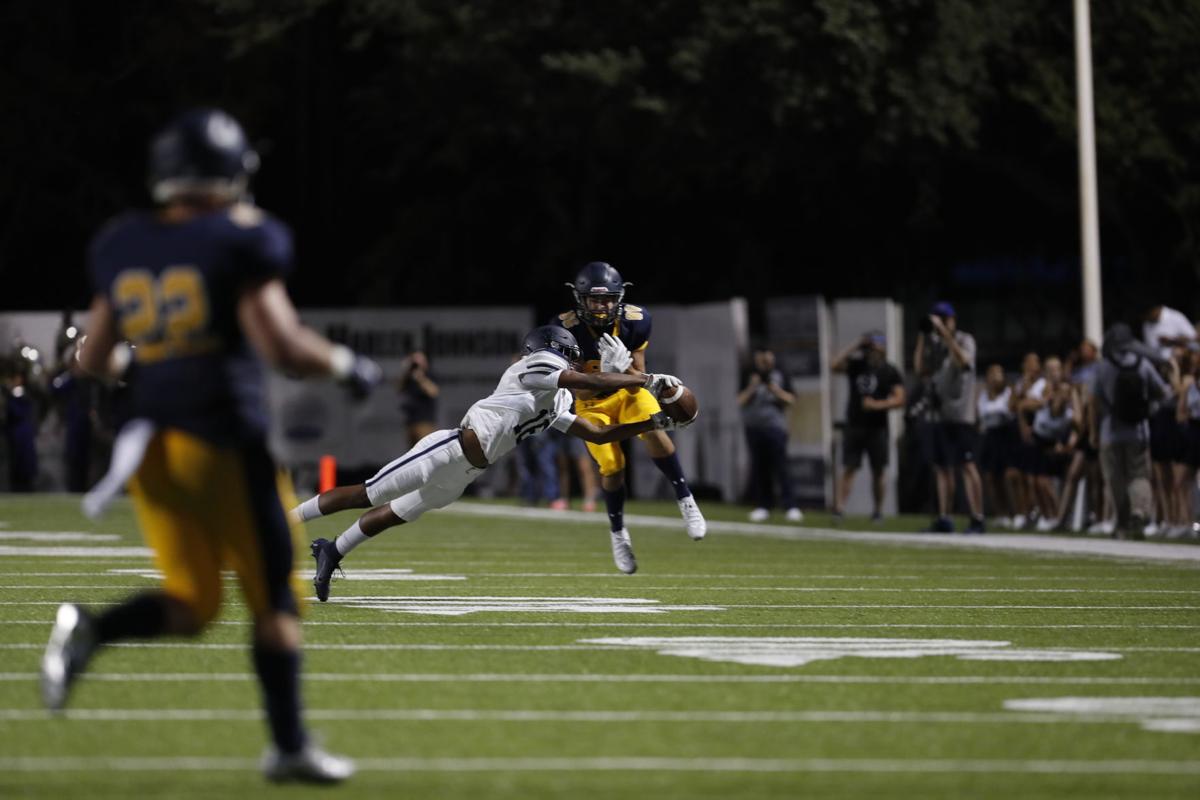 Lone Star senior defensive back Sherman Steptoe intercepted Chandler Morris' pass just before the first half came to an end.

DALLAS – Going into Week Three, the Highland Park football team hadn’t lost a home game to an opponent from Texas since 1998 – until tonight.

Frisco Lone Star stormed Highlander Stadium Friday night and pulled off an upset of mega proportions and stifled the three-time defending state champions at their house in a 30-19 victory.

For most programs, knocking off the No. 1-ranked squad in the state in historic fashion would be the highlight of their season, but not for the Rangers.

“This feels really good, but hopefully it’s not the best feeling we get out of this year,” said Marvin Mims, Lone Star senior wide receiver. “Coming in, I was as nervous as anyone else is, but I watched film all week and watched their game against Rockwall. I thought they were going to play me similar the same way they played Jaxon [Smith-Njigba], so I studied that as much as I could.”

Mims, a four-star recruit, stole the show and posted video game-like numbers in the process. He hauled in a game-high 10 catches for 219 yards and two touchdowns and nearly added a third in the second half before he was chased down from behind near the goal line on a 66-yard reception.

The Stanford commit was virtually unstoppable in one-on-one situations on the outside and was undoubtedly a major piece in handing Highland Park its first loss since 2017.

On the very first play of the game, Mims burned his defender and hauled in a 45-yard touchdown strike from sophomore quarterback Garret Rangel to put Lone Star on the board just 19 seconds in.

Later just before the half, Mims found the end zone again on a 38-yard bomb from Rangel that put the Rangers on top, 24-0, with 3:08 left in the second stanza.

“[Mims] is the best in the state, maybe the best in the country,” said Jeff Rayburn, Lone Star head coach. “What he brings to us on a daily basis in practice and the way he leads our guys is something special.”

His young sophomore quarterback agreed, who threw for 253 yards and two touchdowns in just his third-ever varsity start.

“I trust Marvin so much,” Rangel said. “I feel as if I just throw the ball up he’ll go get it. That’s kind of what I did on the first play of the game and just threw it up there.”

A play Mims made on the night that may go unnoticed in the marquee triumph came on the opening kickoff when he took it nearly 50 yards to set the Rangers up with terrific field position beyond midfield.

In last year’s showdown against the Scots, in which Lone Star lost, 10-7, the lone touchdown from that game came on a Mims kick return, and he knew he had to capitalize on any moment Highland Park decided to kick to him again in the rematch.

“That was crazy and a good confidence booster,” he said. “Not too many teams dared to kick it to me this year and they kicked it to me two years in a row now.”

As dominant as the offense was, the defense was just as stout, holding a high-powered Highland Park offense to just 19 points and 370 total yards – most of which came with the outcome well out of reach late in the fourth quarter.

A major point of emphasis in slowing down the Scots, who came in averaging 59 points per game, was to limit the big-play potential from senior quarterback Chandler Morris.

The Arkansas commit, and son of Arkansas head coach Chad Morris, is one of the top quarterbacks in the state and has the capability of taking a game over with his arm and his feet.

However, the four-star recruit had a difficult time getting anything going and was intercepted a whopping four times in the loss.

His first came late in the first quarter just moments after the Scots moved the chains for the first time of the night when he was picked off by junior linebacker Blake Gotcher on a deflected pass.

With Lone Star up 17-0 at that point, the Rangers looked to make it 24 unanswered points but were stuffed on fourth-and-goal from the one with 4:22 left in the half.

Instead of taking advantage of the massive defensive stop near the goal line and putting up some much-needed points before heading into the locker rooms, Morris then threw a pass into the diving hands of Lone Star senior defensive back Sherman Steptoe at the Highland Park 38-yard line.

Just one play later, Mims muscled in the 38-yard score to give the Rangers a commanding 24-0 advantage going into the half.

The turnover bug struck Morris once again to begin the third when he was intercepted by senior defensive back Tyron Hall.

Lone Star turned the ball over on downs on the ensuing possession, which ultimately led to Highland Park’s first score of the night moments later on a 31-yard touchdown pass from Morris to Paxton Anderson with 7:12 left in the third.

But the Rangers quickly responded with a 25-yard field goal by sophomore Justin Click to extend the lead to 20 before Morris launched his fourth and final interception into the hands of senior safety Torren Pittman on the following drive.

“We can’t give Darren Kight and our defensive staff enough credit,” Rayburn said. “We rolled in so many different guys tonight and so many guys contributed. It was all about relentless effort and guys were giving everything they had on every snap.”

On the Pittman pick, the senior appeared to have scored on the play, but the touchdown was called back due to a block in the back call. Rayburn’s unit had two other touchdowns called back in the win because of penalties, and he knows his team still has plenty of things to improve on despite the monumental win.

“We had three touchdowns come off the board with some self-inflicted things,” he said. “We have some areas we need to improve upon, so we’re not a finished product by any means. But this is a great victory, though.”

Lone Star now enters its bye week and will cruise into district play on Sept. 27 against a Little Elm team with a 2-0 non-district record.