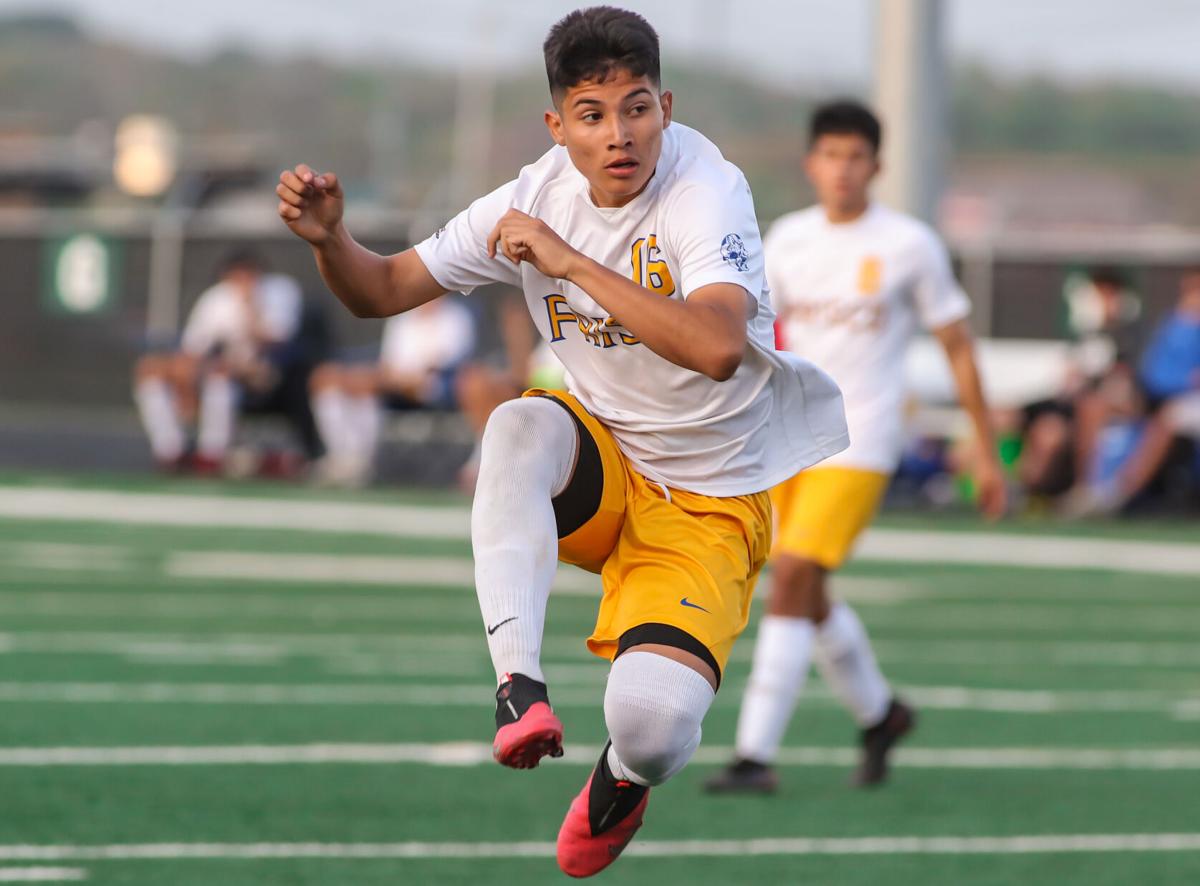 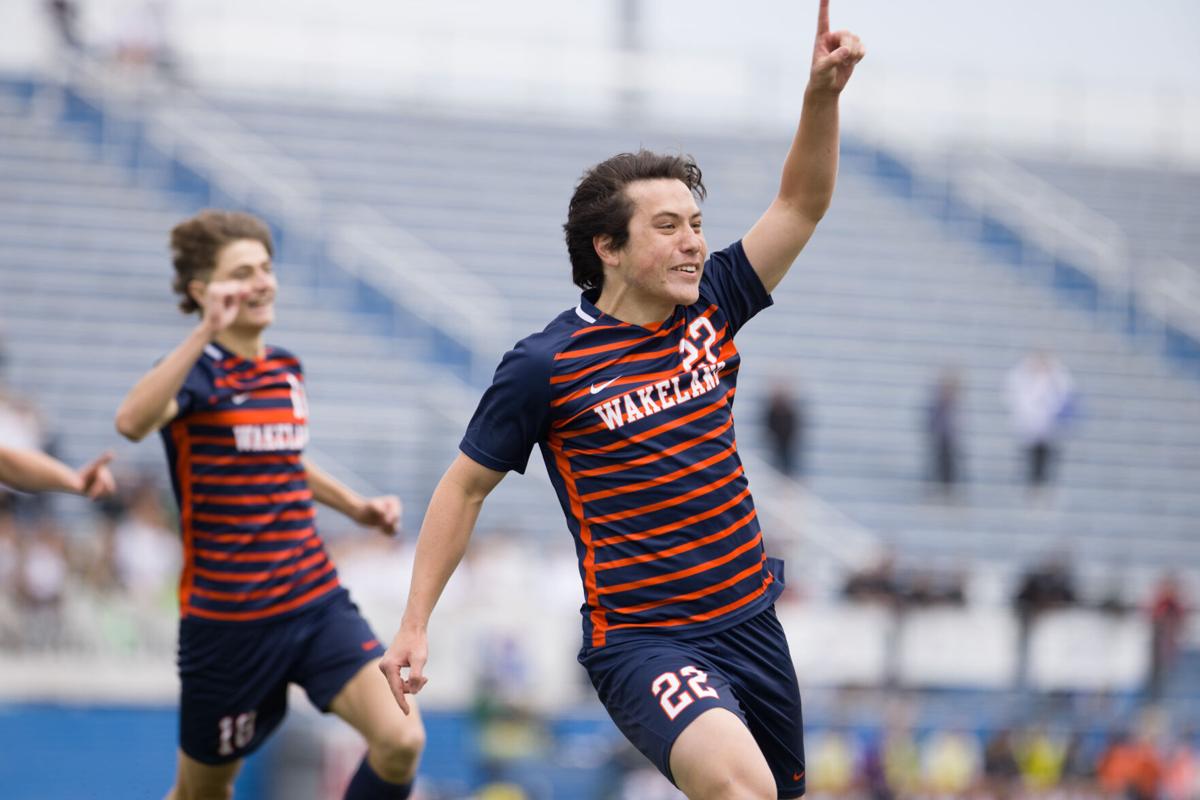 Wakeland junior Brennan Bezdek was selected as the 9-5A offensive player of the year.

Wakeland junior Brennan Bezdek was selected as the 9-5A offensive player of the year.

The 10-team 9-5A boys soccer district has a claim for being the best in the state of Texas.

Of course, it starts at the top with Wakeland, who captured its third state championship in the last five years.

But perhaps the best evidence comes from the Wolverines’ lone loss of the season, a 2-0 setback that came at the hands of Lone Star, who finished last in the district.

That is how good that 9-5A was top to bottom.

The competition on the pitch carried over to the all-district team, where the Wolverines led the way, but each team was recognized with their share of honorees.

Wakeland has been the premier program in the state in recent years, making five consecutive trips to the state championship game and earning its fourth overall title last month with a 3-2 victory over Humble Kingwood Park.

The Wolverines, who finished with a 24-1-1 record, claimed 11 selections on the team, including a pair of superlative award winners.

Junior forward Brennan Bezdek was voted as the offensive player of the year. Bezdek finished the season with 26 goals and 12 assists, but it was when he scored that was just as important, as many of those were game-winners and he tallied a goal and an assist in the state championship match.

Senior Connor Pettigrew was tabbed goalkeeper of the year, as he recorded 11 shutouts and came up with big save after big save during the playoff run.

Wakeland had five additional players chosen to the first team.

Junior midfielder Ryan Greener was second on the team in scoring with 12 goals and nine assists, while junior forward William Heidman tallied a dozen goals and five assists.

Though the Wolverines pulled away to win the 9-5A title, the battle for the other three playoff spots was tightly-contested, and that too was reflected on the all-district team.

Frisco emerged as the 9-5A runner-up and made some noise in the playoffs, defeating Wylie East, Kimball and Centennial before falling to Longview in a narrow 3-2 loss in the regional semifinals.

The Raccoons nabbed 10 spots on the team, including a share of the highest honor as sophomore Diego Pepi was voted as the co-most valuable player.

Despite facing double and triple-teams from opposing defenses, Pepi still produced as one of the top scorers in the area, tallying 25 goals and nine assists, including 20 goals and six assists during the district slate.

Senior defender and team captain Matt Diaz missed all of last season with an injury but returned to form to step into a new position. In addition to his work in the back, he was also a key part of the offense, with seven goals and six assists.

Senior Shirzaad Ghadially did not play high school the last two seasons due to club obligations, but made an immediate impact. Ghadially recorded four goals and six assists playing a variety of positions, including center back and midfield.

Senior forward Ricky Casso suffered a season-ending injury in the district opener a year ago, but came back strong to earn first-team honors after recording eight goals and six assists, with three of those scores coming during the playoff run.

That trio was joined on the first team by senior goalkeeper Aidan Pham and senior defender Alex Hristov.

Centennial finished third to make its first playoff appearance since 2018 and advanced to the regional quarterfinals before falling to rival Frisco.

The Titans had a pair of superlative awards, with senior Ethan Lopez named the defensive player of the year after leading the team from his center back position an also adding a pair of goals and two assists.

Sophomore Andres Arrangoiz was tabbed the newcomer of the year, as he recorded six goals and seven assists, with three of those helpers coming in the playoffs.

That pair was joined by a trio of players on the first team. Senior Max Flaviani was the go-to scorer, leading the team with 16 goals, with four of those coming in the playoffs.

Senior Muturi Mwangi and junior Zach Paclibar, who scored a goal in the playoffs, also made the first team, while the second team included junior Frederic Lenglart, who had two goals and three assists and seniors Matthew Leal and Mason Kennard, who split time at the goalkeeper position.

Liberty claimed the fourth spot on a tiebreaker over Reedy to earn its first playoff berth since 2016 and it pushed 10-5A champion The Colony to the limit in the bi-district round before falling in a shootout.

The Redhawks had a pair of major awards with junior Jack Bryan being selected as the utility player of the year. Bryan led the team in goals with 11 and in overall scoring.

Fred Kaiser was voted as the coach of the year, as Liberty posted a 10-6-5 record and broke a five-year playoff drought.

The Redhawks had four more players named to the first team. In his first season with the program, junior Thomas Garofalo not only locked down opponents from his right defender position, but also contributed five goals and four assists.

The Lions were edged out of their second-ever playoff appearance on the tiebreaker, but still enjoyed a winning season.

Reedy had one superlative award as senior Aiden Cumbie was chosen as the co-midfield player of the year, as he led the team in scoring with eight goals and 10 assists.

Junior Xander Naguib was named to the first team after tallying seven goals and four assists and he was joined by sophomore defender Cole Powell.

They also featured a pair of talented sophomores on the second team with Victor Hernandez and Charlie Newberry. Hernandez, a forward, recorded 12 goals and five assists. Newberry, a corner back who scored two goals, showed his value when he was quarantined for three weeks and the Warriors lost every game, but when he returned, they won seven of their last nine.

Independence had one major award winner as junior Thato Meko was chosen as the co-midfield player of the year.

Seniors Fredric Kossehasse and Viraaj Veeramachaneni were named to the first team and the second-team featured juniors Sean Avery and Reginald Bush.

Senior Matthew Hampton had three goals and seven assists as he was named to the second team and senior defender Gabe Barnes registered three assists, but his true value was at his right back position, where he anchored the defense.

Heritage senior Patricio Solorzano was chosen to the first team as he amassed a team-high 10 goals with four assists, as was defender Dylan Sefcik. The Coyotes had second-team picks with senior Ivan Martell and senior Parker Garza, who had six goals and five assists.

Despite finishing in last place, Lone Star earned enough respect to have five players chosen to the team, including the co-most valuable player in junior Aubry Eason, who led the team with eight goals and four assists.

Sophomore defender Jacob Wenzel was named to the first team, while the second-team selections were sophomore Alejandro Gonzalez, who had four goals and an assist, and juniors Daylan Lowe and Emi Luna.

Co-Midfield Players of the Year

Co-Midfield Players of the Year