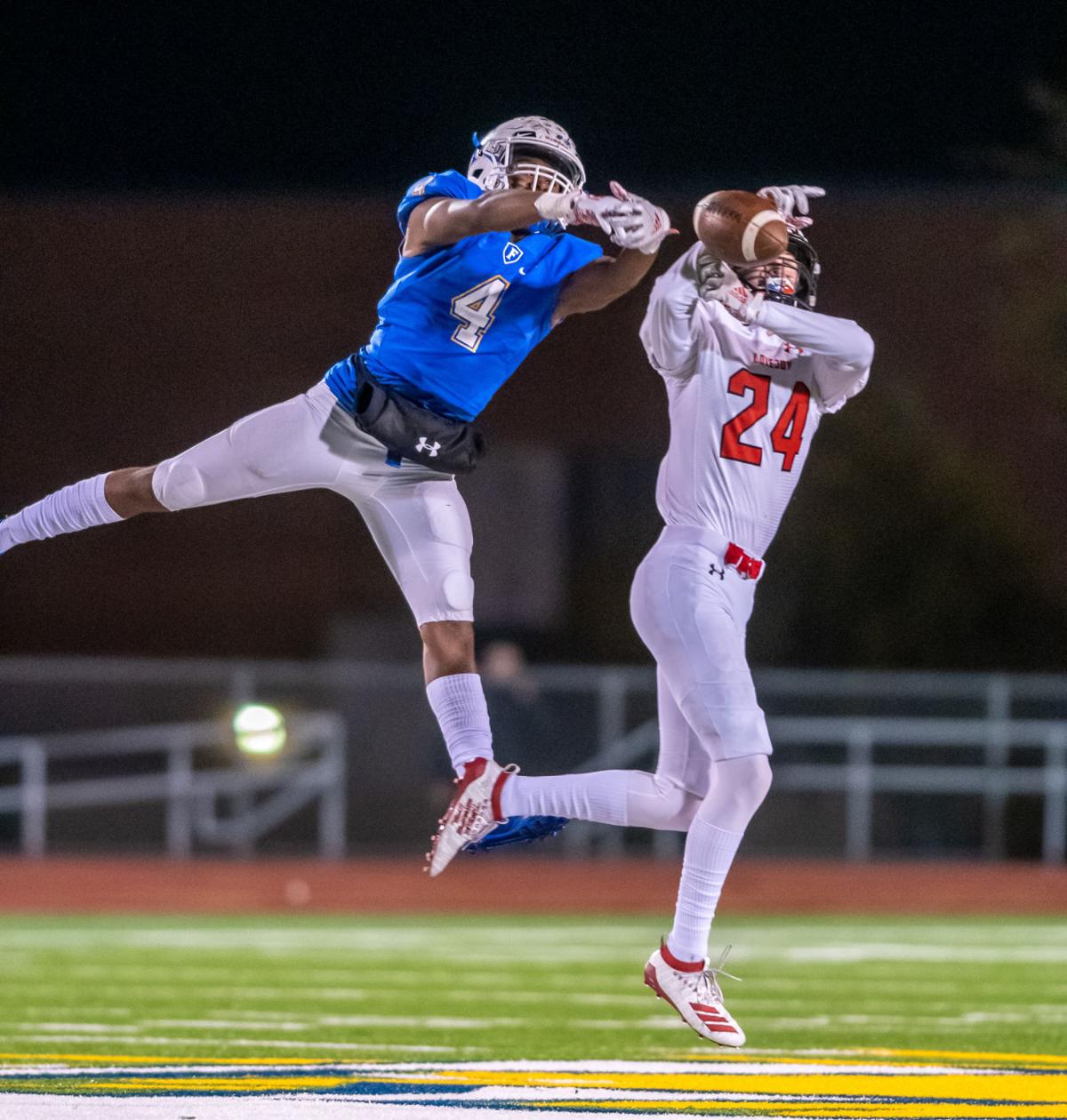 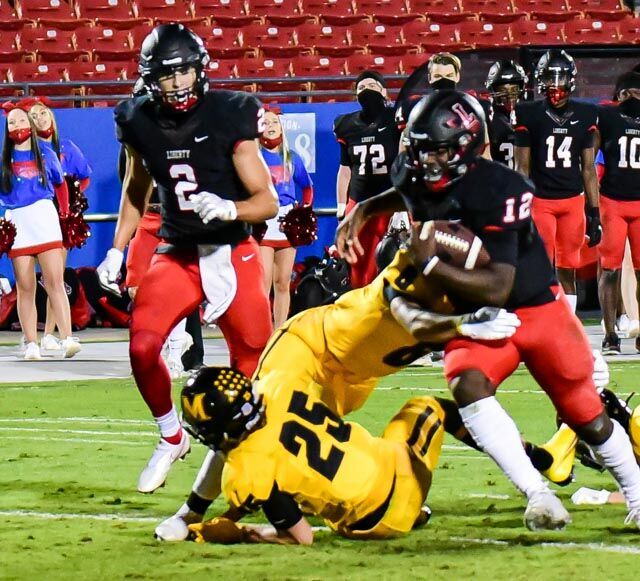 Liberty sophomore Keldric Luster was named the District 7-5A Division 2 Offensive Sophomore of the Year. 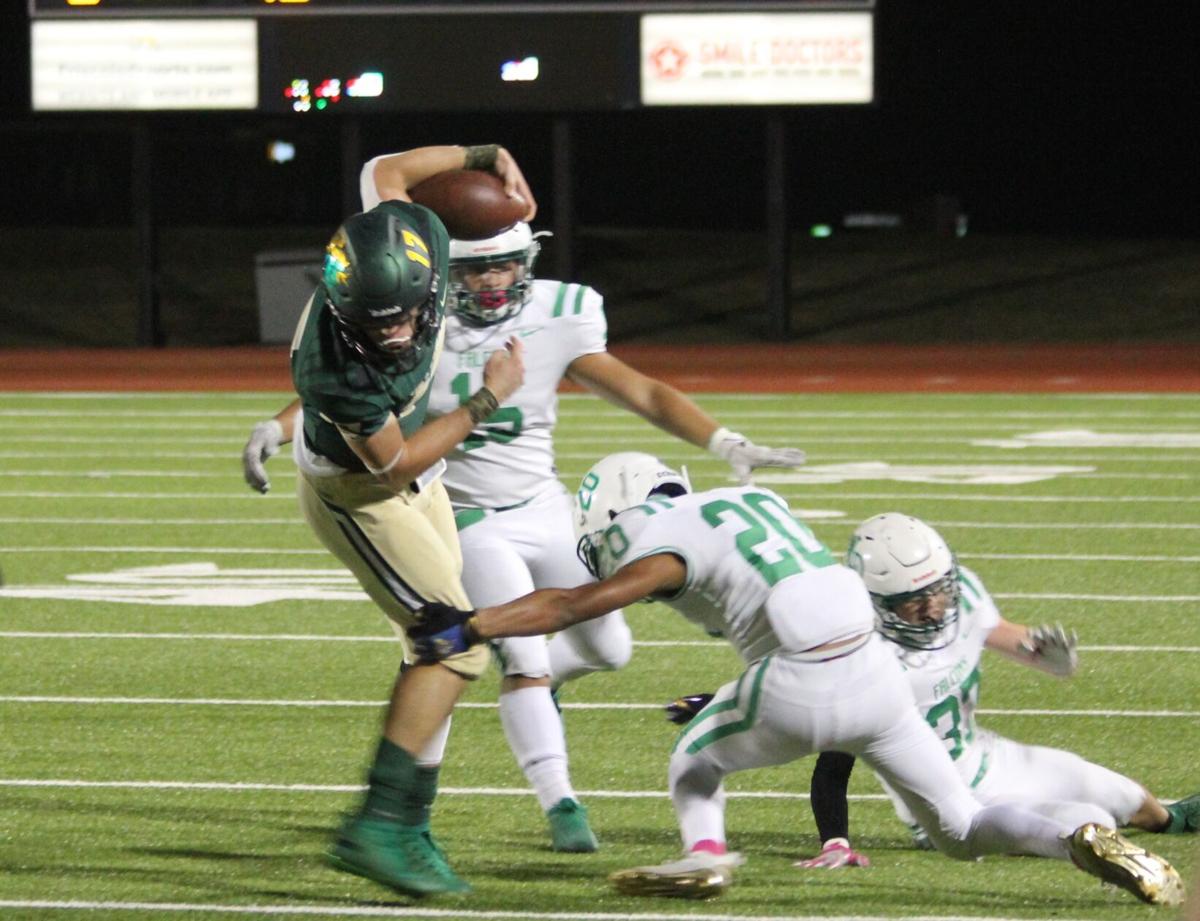 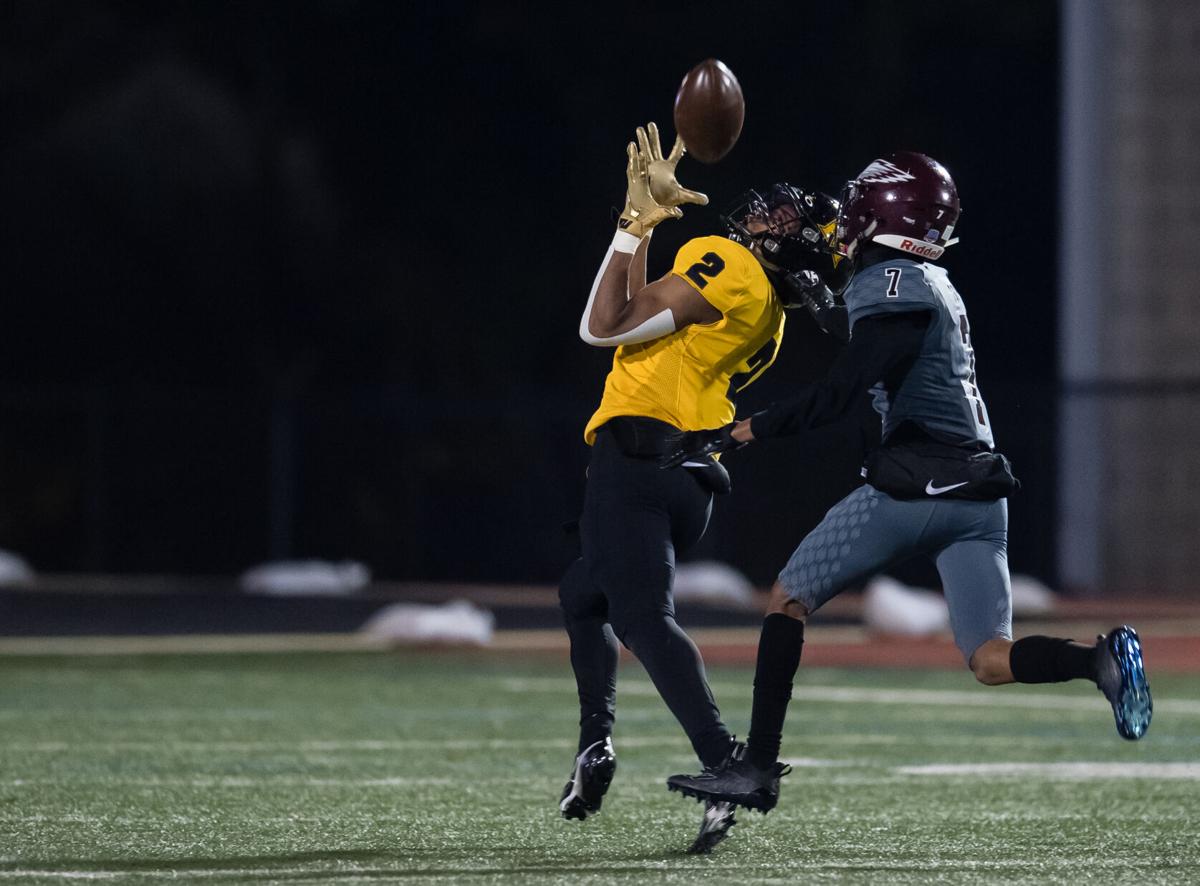 Liberty sophomore Keldric Luster was named the District 7-5A Division 2 Offensive Sophomore of the Year.

This was one of the strangest seasons ever as football teams combated the COVID-19 pandemic and everything that came with it, and the 7-5A Division 2 slate was certainly not immune.

Lovejoy took center stage, putting together the best season in program history on its way to an undefeated 8-0 district season and the 7-5A Division 2 title.

Frisco finished second to return to the playoffs for the eighth time in the last 10 years, but in an unusual twist, they did so despite playing only five district games due to a series of cancellations.

The Raccoons were joined in the playoffs by Denison and Frisco ISD mate Liberty, who was one of the feel-good stories of the year, as after winning just one total game in the previous two seasons, was able to earn a postseason berth for the first time since 2011.

The four FISD programs were well-represented on the all-district team, as Frisco, Liberty, Lebanon Trail and Memorial combined to claim 42 spots on the squad.

Here is a look at the honorees.

Though the Raccoons played only five district games, finishing with a 4-1 record, it was far from finished, as they picked up playoff victories over Royse City and South Oak Cliff to advance to the regional semifinals as the closed with a 8-2 overall mark.

So it was little surprise that Frisco led the FISD programs with 16 selections on the all-district team, including a pair of superlative selections.

Senior Chase Lowery was voted as the utility player of the year, which should come as little surprise looking at his season.

Lowery was a huge playmaker on defense from is cornerback position, recording six interceptions, two of which he returned for touchdowns, with 36 tackles, three pass breakups, a forced fumble and a fumble recovery. Lowery also made a big impact on the other side of the ball, where he had 23 receptions for 515 yards and four touchdowns and added 16 carries for 120 yards and a pair of scores.

Sophomore linebacker Brandon Miyazuno was tabbed as the defensive newcomer of the year. Miyazuno made an immediate impact with 45 tackles, with two for loss, three sacks and four fumble recoveries.

The Raccoons had four players named to the first team on both offense and defense.

Junior Cole Hutson, who already has offers from a plethora of top Division I programs, was a unanimous pick after putting together one of the state’s most dominant seasons for an offensive lineman, where he recorded 117 pancake blocks.

He was joined by senior center Greer Rush, who had 62 pancake blocks.

That pair helped open holes for senior running back Syone Usma-Harper, who despite playing in only six games, earned first-team honors after carrying the ball 101 times for 619 yards and 10 touchdowns.

Senior A.J. DiNota was also selected at halfback, where he had 32 carries for 384 yards and three scores.

The Frisco secondary featured a pair of honorees, as senior safety Trent Bryant made it after tallying 63 tackles, two pass breakups, a forced fumble and a fumble recovery, while senior cornerback Myles Mays had 29 tackles, three interceptions and eight pass breakups.

Senior outside linebacker Donta’ Reece recorded 51 tackles, with two for loss, one sack and an interception, while senior lineman Aidan Estabrooks had 28 tackles, five for loss, and three quarterback pressures.

The Redhawks put together their best season in nearly a decade, and their accomplishments were recognized with eight selections.

One of the biggest reasons for the turnaround was the play of sophomore quarterback Keldric Luster, who was tabbed offensive newcomer of the year.

Though he played in only six games, the dual-threat Luster put up eye-popping numbers, completing 98-of-155 passes for 1,603 yards and nine touchdowns and adding 93 carries for 798 yards and seven scores on the ground.

Junior wide receiver Evan Stewart was a unanimous selection after he had 46 catches for 913 yards and nine touchdowns in only eight games. Senior tight end Connor Hulstein was also picked to the first team, as he had 39 grabs for 693 yards and a score.

The second-team offense featured one pick in senior running back Jonathan Bone (89-709, 9 TDs). Liberty landed three on the defensive side with junior lineman Nick Teta (46 tackles, 7 TFL, 1.5 sack), junior outside linebacker Sam Wenaas (66 tackles, 12 TFL, 5 sacks, INT) and senior inside linebacker Will Glatch (63 tackles, 3 TFL, sack, INT), who not only made an impact in six games on defense, but after an injury to Luster, returned to his old quarterback position where he helped complete the charge to the playoffs (47-of-85, 738 yards, 5 TDs passing, 57-340, TD rushing).

The Trail Blazers fell short of the playoffs, but put together the best season in their short, three-year history, posting a 6-4 record.

Their efforts were recognized with seven spots on the team.

Senior quarterback Drew Martin was a first-team selection after completing 122-of-216 passes for 1,547 yards and 15 touchdowns and also rushing 98 times for 806 yards and seven scores.

Lebanon Trail also had a representative on the first-team defense, as senior safety Zachary Robinson had 95 tackles, with four for loss, a team-high five interceptions, nine pass breakups and a pair of forced fumbles.

Senior Ryan Lamb was one of the few players recognized on both sides of the ball, making the second team at center after paving the way for the offense, and on defense on the line (27 tackles, 5 TFL, 1.5 sacks, 9 QBH, 2 blocked FGs) and he was joined on that side of the ball by senior outside linebacker Roman Knautz (110 tackles, 11 TFL, 4 sacks, 24 QBH, 3 PBU, 2 FF).

The Warriors were only able to squeeze in eight games, posting a 3-5 record, but still nabbed 10 spots on the squad, including a pair of first-teamers.

Junior Ethan Lollar to the first team at punter, but could also have been recognized for his work at quarterback, where he completed 126-of-208 for 1,621 yards and 15 scores.