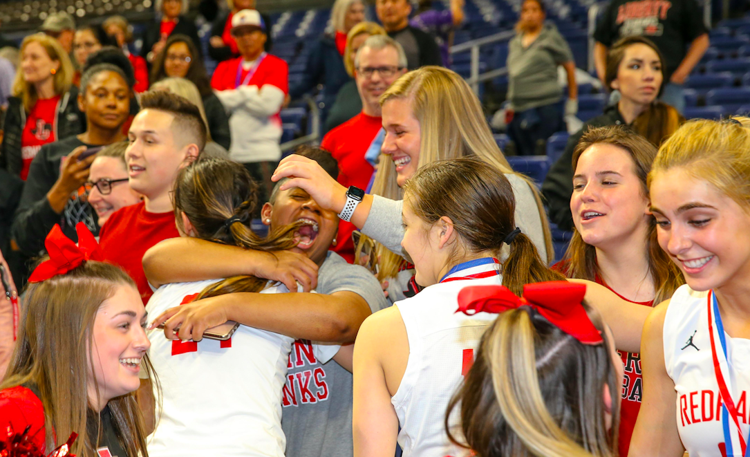 The Liberty girls basketball celebrates winning the Class 5A state championship in March. 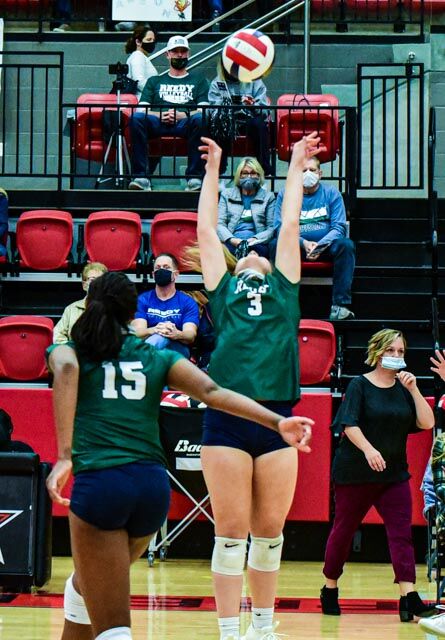 The Reedy volleyball season rallied from a slow start to earn a share of the 9-5A title along with Lebanon Trail.

The Liberty girls basketball celebrates winning the Class 5A state championship in March.

The Reedy volleyball season rallied from a slow start to earn a share of the 9-5A title along with Lebanon Trail.

Here is the second installment from The Frisco Enterprise’s Top 10 Spots stories from the past year.

The COVID-19 pandemic created a number of unusual, yet memorable, district races and that was certainly the case in 9-5A volleyball.

Because the start of the regular season was delayed due to the pandemic, and the fact FISD teams play in one of the largest districts in the state in the 10-team 9-5A, that left very little time on the court before the results got more serious.

To complicate matters for Reedy, it had to deal with its own dose of the pandemic close to home, as a bulk of its varsity members were forced to quarantine and it had to start the district slate with primarily junior varsity players.

The Lions dropped their first three matches and stood at 3-5 and in sixth place through eight matches.

But the district committee met and decided that Reedy would be allowed to replay a handful of those matches.

At that point, the focus was on getting back into playoff contention.

The district’s decision allowed Reedy to regroup, even though it meant the prospect of playing three matches every week through the end of the season.

Lebanon Trail, meanwhile, was rolling right along. The Trail Blazers stormed through most of the schedule, winning their first 15 matches.

But given a second chance, the Lions were making the most of their opportunity, stringing together a winning streak of their own to ascend up the standings.

Lebanon Trail hit an untimely skid, dropping its final three matches, and Reedy took advantage, including a head-to-head win, to pull into a tie as the two teams shared the district crown.

Frisco ISD had five teams qualify for the football playoffs, but Liberty was the “feel-good” story of the group.

The Redhawks went .500 in their first varsity season back in 2008 and that was a precursor to a three-year run of playoff appearances, including a 12-1 district championship campaign in 2010.

But as FISD continued to grow, and new programs emerged, Liberty found itself taking a backseat, enduring a stretch of eight consecutive losing seasons.

But in its second season under head coach Matt Swinnea, Liberty entered this season with 16 returning starters and a renewed sense of optimism.

After a tough opening loss to Reedy, Liberty reeled off four consecutive victories, including a 3-0 start to the 7-5A Division II season with wins over Prosper Rock Hill, Memorial and Lake Dallas.

The catalyst was the emergence of sophomore quarterback Kendric Luster, who in just six games, established himself as one of the top dual-threats in the area, accounting for 2,127 yards and 22 touchdowns in only six games.

But Luster was injured in the middle of the season, putting a damper on the hot start.

In his place stepped senior Will Glatch, who had previously been the starter at quarterback, but had moved to defense to make room for Luster.

Glatch stepped in and led the Redhawks to a key 40-35 win over Lebanon Trail and then threw a pair of touchdown passes and ran for another in a 54-27 victory over Princeton that effectively gave Liberty its first playoff berth since 2011.

Though the playoff stay was a short one after a loss to No. 1 Ennis, it was a huge step forward for a program whose six wins doubled their total from the last three seasons combined.

Frisco ISD is one of the fastest growing school districts in the state, and now with 10 high schools, the talent tends to get spread around among the various campuses.

But this past fall once again proved that there is more than enough to go around and multiple programs can be simultaneously successful.

For the third consecutive year, FISD placed five teams in the playoffs, matching the most ever for the school district.

Three of those playoff teams came out of 5-5A Division I with Lone Star, Independence and Wakeland.

Coming off a trip to the state semifinals, the Rangers expected to be back in the mix and they backed up those expectations to make their sixth straight playoff appearances and eighth in nine years.

Lone Star shook off a 0-2 start to roll through district until the finale against Denton Ryan. The Rangers then picked up victories over W.T. White (61-15) and Magnolia (40-28) before falling to Highland Park (30-20) in the regional semifinals.

The Knights made their third straight trip to the playoffs and fourth in five years. Independence rolled past Woodrow Wilson (58-10) in the bi-district round before running into FISD nemesis Highland Park in the area finals, where it fell, 42-20.

The Wolverines had a bye in the final week of the regular season, leaving their streak of seven consecutive appearances out of their hands. But the dominoes fell just the right way on the final day, and Wakeland extended its run before falling to Lancaster in the opening round.

Frisco and Liberty represented FISD out of 7-5A Division II.

The Raccoons, making their third straight playoff appearance, returned to the regional semifinals for the second year in a row.

Frisco posted a blowout win over Royse City (52-9) and battled past a tough South Oak Cliff team (19-17) before falling to perennial power Aledo in a 45-27 loss in the third round.

The Redhawks made the playoffs for the first time since 2011, but ran into No. 1 Ennis in the bi-district rond.

But expectations for the past season were tempered early on, as the Redhawks graduated their entire starting lineup and returned only two players from that runner-up team.

There may have been plenty of doubters, but head coach Ross Reedy and the Liberty team were not among them.

The Redhawks did not have the look of a state champion early on and stood at 3-7 through their first 10 games.

But those fortunes changed with the start of the 9-5A season, as district most valuable player sophomore Jazzy Owens-Barnett and second-teamer Maya Jain led Liberty to a 16-2 record and the district championship.

It was merely a sign of things to come.

The Redhawks posted playoff wins over Lovejoy and South Oak Cliff before surviving rival Centennial in a 32-31 win to return to the regional tournament.

Liberty’s ability to win close games continued, as it held off Red Oak and then outlasted Midlothian, 48-43, in triple overtime to punch its ticket to the state tournament.

This time, the Redhawks would not be denied.

After rallying from a six-point fourth-quarter deficit to top College Station in overtime, 44-41, Liberty put the finishing touches on its dream season with a 35-26 victory over Veterans Memorial to win the state title.

Owens-Barnett once again led the way with 22 points on her way to earning game most valuable player honors.

This is the second in a two-part series looking back at The Frisco Enterprise’s Top 10 sports stories of 2020.