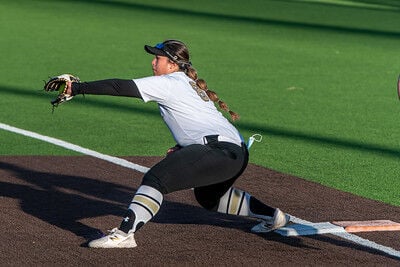 The Colony junior Kailee Lang catches a ball during a game earlier this season against Sherman. 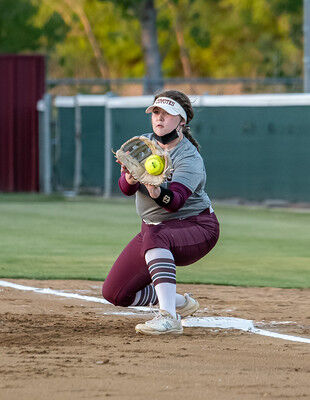 The Colony junior Kailee Lang catches a ball during a game earlier this season against Sherman.

FRISCO – The end of Friday’s game served as a microcosm of last week’s Class 5A bi-district playoff series between The Colony and Frisco Heritage.

Trailing by four runs, The Colony had the bases loaded with two outs in the top of the seventh inning after freshman Sabrina Wick hit a single.

All the Lady Cougars needed to tie the game was just one swing of the bat. But, just like the rest of the best-of-three series, Coyotes sophomore pitcher Jensin Hall made the necessary pitches to subdue The Colony’s offense.

Hall threw a pitch on the outside corner to get a called third strike on Lady Cougar junior Ella Anderson to wrap up a 5-1 victory for Heritage and clinch the first playoff series win in school history for the Coyotes.

“She’s an ultra competitor,” said Tim O’Brien, Heritage head coach, of Hall. “She hates to lose. Anytime we’re doing anything with the girls, she loses her mind if she’s not winning. And it’s like that with a lot of the girls. That’s what you want out of your athletes.”

The Colony had base runners in every inning but Hall was at her best in those situations. For the game, the Lady Cougars out-hit the Coyotes 8-6 but stranded 11 base runners. And, for the two-game series, The Colony (10-15-2) left 20 runners on base.

Hall allowed eight hits during game two and issued five walks but she yielded just the one run – an infield RBI single by junior Olivia Wick in the top of the sixth – and struck out five. For the series, Hall struck out 11 batters.

“Credit to that pitcher,” said Deana Coleman, The Colony head coach. “She spun and she worked it, and she got out of those jams. We could not get that hit and she did a great job.”

Hall ran into a bit of trouble during game one.

Playing on their home field, the Lady Cougars fed off the large crowd at Lady Cougar Field and scored two runs in each of the first two innings – the first two on a two-run double by sophomore Kaitlyn Moeller and the third on an RBI single by freshman Allyson Acosta – to take a 4-1 lead.

“I was so proud of them coming out,” Coleman said. “Like I said, it was 4-3 when that big obstruction got called when we were at our place. That changed the whole momentum of the game. We were up by one. If we get this throw down, then we’ve got two outs and they don’t get six in that inning. It changed the whole complexity of the game.

“And when you have youth, they can’t take that change that quick. We’re going to learn from that and we’re going to build on it.”

Heritage slowly chipped away at The Colony’s lead before delivering the dagger in the fifth inning.

Sophomore Kailey Sweezey delivered the biggest blast –a three-run shot that capped off a six-run top of the fifth for the Coyotes, who took a 9-4 lead. Two batters prior to Sweezey, Sarah Hagan, a junior, hit an RBI single to put Heritage (16-4) on top, 5-4.

O’Brien said that Sweezey’s home runs provided a sense of calm for his team.

“I knew that we were just tight and you could see it in their faces,” he said. “They were just tight and tense and trying too hard. I finally just got on them a little bit and told them to settle in, and we relaxed. Sweezey hit that home run, and I think that it just kind of relaxed everyone. It was like, ‘OK, we're in this. Let’s do what we do.'"

The scene shifted to Frisco Independence on Friday afternoon for game two. The game was originally scheduled to be played at Heritage, but forecasted rain caused a change in scenery. Heritage made the most of its temporary home.

Walks proved to be The Colony’s undoing in this game. The Lady Cougars issued four straight walks to the Coyotes in the first inning, which led to three runs for Heritage.

Coyotes junior Elyse Leclair made it 4-0 Heritage with an RBI single in the second inning.

Heritage will face the winner of the Molina vs. W.T. White series next week in the area round.