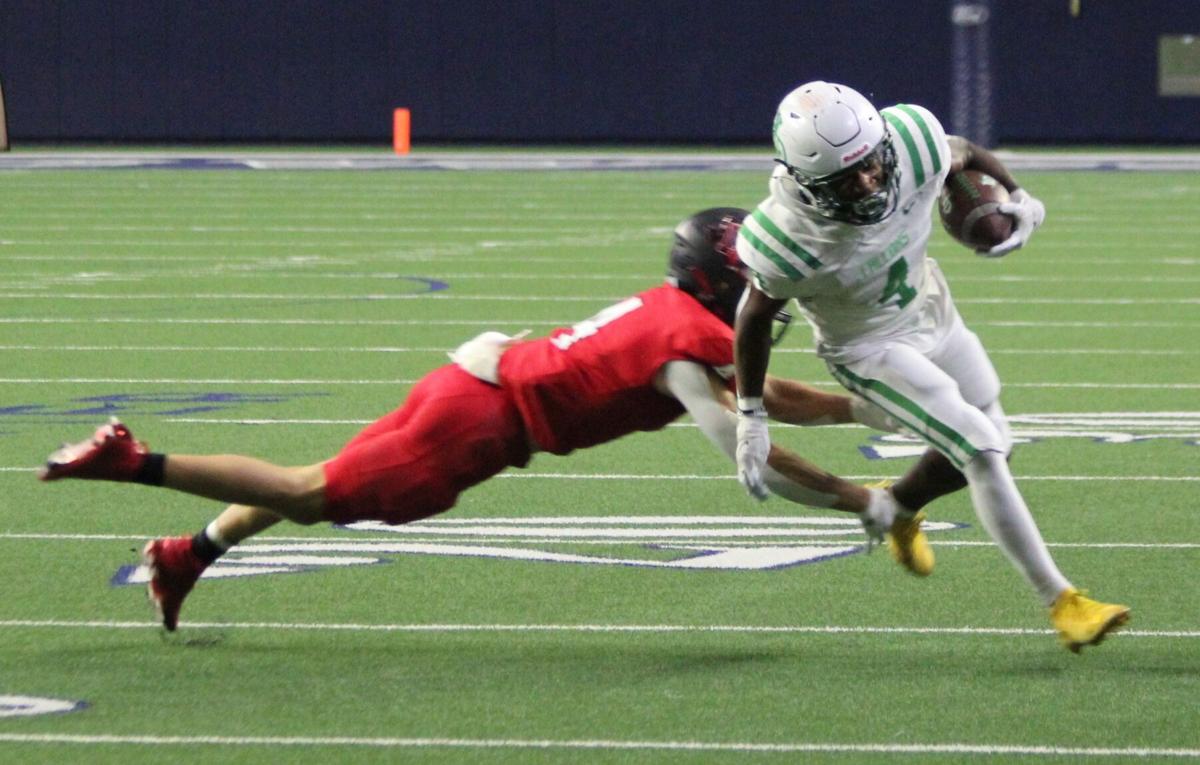 Lake Dallas senior Javaan Evans eludes a Frisco Liberty defender during Thursday's game at the Ford Center at The Star. 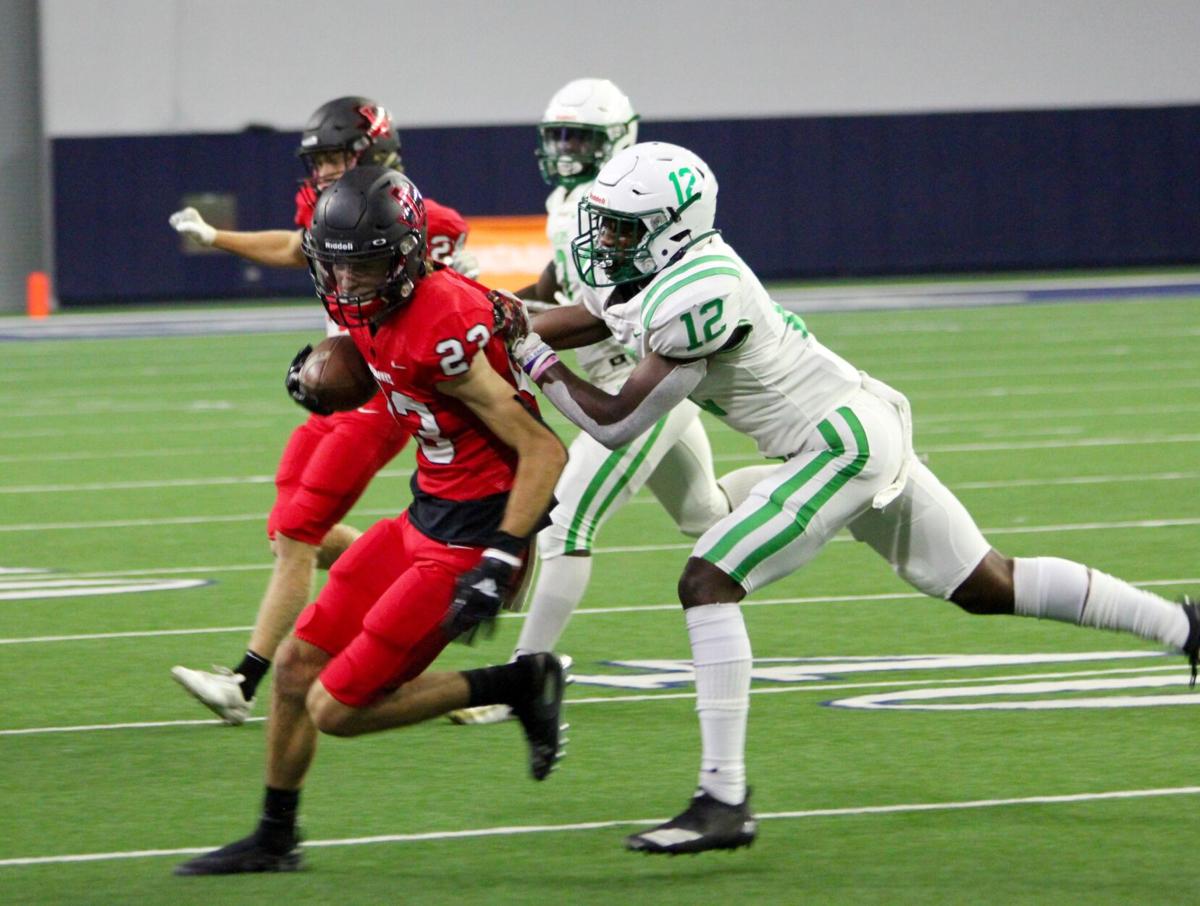 Frisco Liberty senior Cade McGarrh (23) runs for yardage during Thursday's game against Lake Dallas at the Ford Center at The Star.

Lake Dallas senior Javaan Evans eludes a Frisco Liberty defender during Thursday's game at the Ford Center at The Star.

Frisco Liberty senior Cade McGarrh (23) runs for yardage during Thursday's game against Lake Dallas at the Ford Center at The Star.

Luster was on point in the passing game, throwing for 217 yards by halftime. But after Lake Dallas had cut what had been a 17-point lead for Liberty to three after a 3-yard run by senior Brendan Sorbsy five minutes into the third quarter, Luster called his own number.

On the sixth play of the ensuing Redhawks drive, Luster ran to his right to elude a host of Falcon defenders in the backfield, burst up the right sideline before using his shoulder to knock down a Lake Dallas defender at the goal line on a 20-yard touchdown run.

“I saw the corner came down and with me being as good of a player as I am and my teammates being great and blocking as well as they do, I feel like that a play was needed to get our ego going,” Luster said.

That highlight-reel run was one of three rushing touchdowns in the second half for Luster in a 41-24 victory for Liberty at the Ford Center at The Star on Thursday night.

“When it comes to crunch time, we put the ball in his hands,” Swinnea said. “It got a little tight there and Keldric did what he had to do.”

Lake Dallas (3-2, 1-2) had its chances but several dropped passes by Falcon receivers, as well as goal-line stand by the Liberty defense with 4:12 left in the first quarter, forced the Falcons to play from behind.

After the Redhawks opened the scoring on a 3-yard run by senior Jaxson Frazier, the Falcons drove all the way to the Liberty 2-yard line on the ensuing possession. But the Redhawks stuffed Sorsby on two straight running plays. Senior defensive end Chika Ugoh tackled Sorsby on fourth-and-goal to force a turnover on downs.

Liberty had 10 tackles for loss with Ugoh making four while senior Sam Wenaas had two sacks.

Four minutes into the second quarter, Lake Dallas was driving inside Liberty territory, but a pass that would have resulted in a touchdown was dropped.

“I thought our defense played one of its better games,” Swinnea said. “Our offense sputtered at times. But defensively, we made a lot of stops.”

Lake Dallas finally reached the end zone with 56 seconds left in the first half.

With the Falcons facing fourth-and-5 at the Redhawk 46, Sorsby threaded a pass to junior wide receiver Evan Weinberg, who caught the ball on a slant route and completed a 46-yard catch-and-run play for a touchdown to cut the deficit to 20-10.

Lake Dallas built on that momentum to start the second half.

Sorsby burst 3 yards for a touchdown to bring the Falcons to within 20-17 with 7:13 left in the third quarter. The score came one play after junior Josh Sanchez ran 2 yards for a first down on a fourth-down play.

“We talk in the locker room that we have to believe that we can win,” said Jason Young, Lake Dallas head coach. “We have to get that mentality where we are going to make the plays. We never gave up. Sure, we dropped a couple of balls. But we battled.”

After Luster ran for a 20-yard touchdown a short time later to restore a two-possession lead for Liberty, his counterpart, Sorsby, wasn’t seen on the field for the remainder of the game. Sorsby suffered what appeared to be a hand injury and didn’t return.

“We’re not sure yet,” Young said. “He had some pain in his hand and couldn’t quite grip the ball to throw it. So, he came out and tried to ice it up to try to loosen it up, and it did not. We’re going to evaluate it and see where we’re at.”

Lake Dallas junior Micaiah Brooks came in for Sorsby and drove the Falcons inside the Liberty 35-yard line on three different occasions. The first two drives resulted in a turnover on downs and a fumble. But Brooks completed a 35-yard touchdown pass to junior Niki Gray with 4:08 left in the ballgame.

“I’m so proud of him,” Young said of Brooks. “I’m so proud of all of the guys. We got dealt some adversity tonight and Micaiah went in there and made some things happen. He’s a starting cornerback. He doesn’t get a lot of reps at quarterback. He came in and did well.”