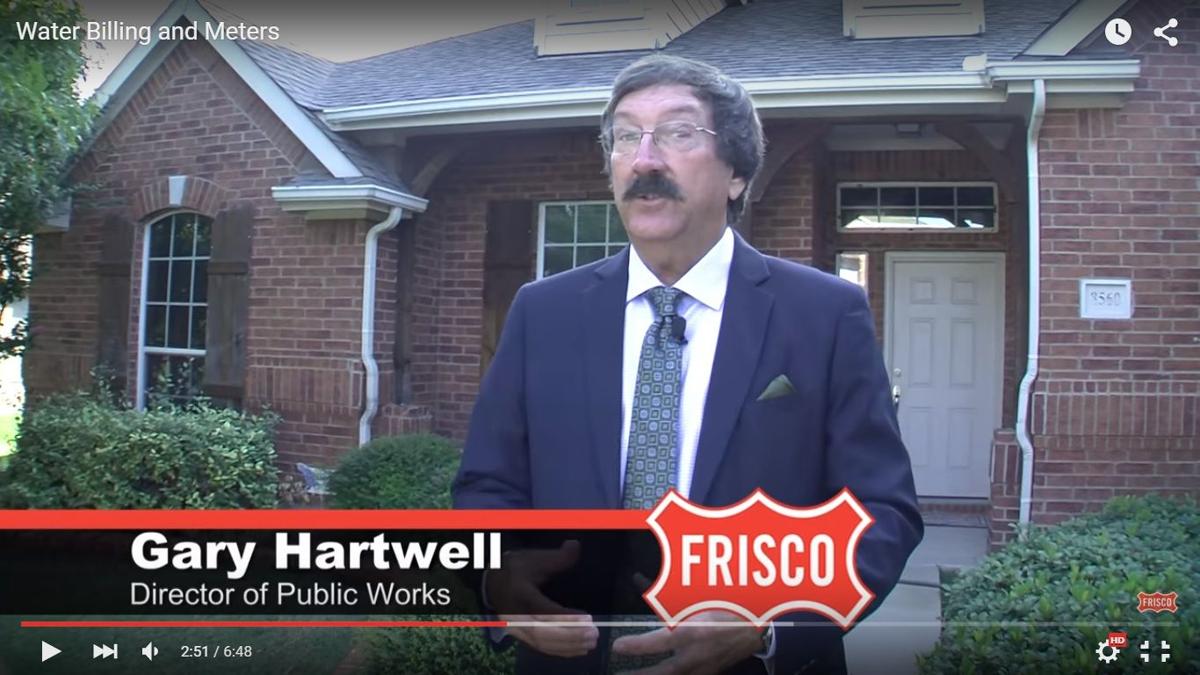 Frisco Public Works Director Gary Hartwell, speaking on a city video, says he knew to expect a big water bill in August after irrigating his lawn much more than he did last year. 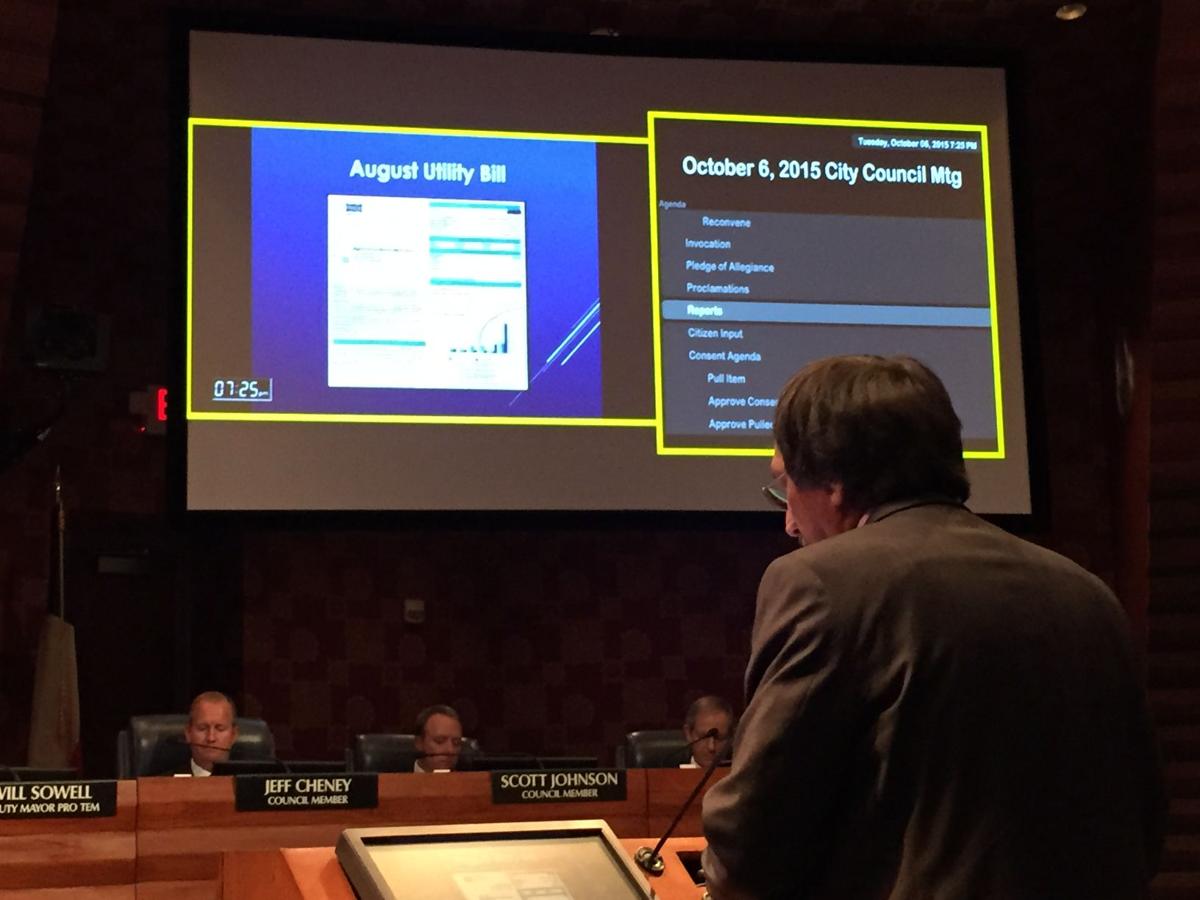 Frisco Public Works Director Gary Hartwell discusses with the City Council his August water bill, which like that of many other residents, was three times higher than his bill in August 2014.

Frisco Public Works Director Gary Hartwell, speaking on a city video, says he knew to expect a big water bill in August after irrigating his lawn much more than he did last year.

Frisco Public Works Director Gary Hartwell discusses with the City Council his August water bill, which like that of many other residents, was three times higher than his bill in August 2014.

Frisco Public Works Director Gary Hartwell is showing off his utility bill, and it's not pretty.

“I knew last year that the usage was low,” he says on a video the city staff has made to address concerns of residents who were shocked by how much their bills had jumped during a dry couple of months with less restrictive watering rules in place than Frisco faced a year ago. View it at firscotexas.gov.

“I knew that when I turned on the sprinkler system, my usage was going to go up,” he continues on the video. “When I got my August bill, I noticed that usage had gone up maybe three times [to 23,000 gallons], and that’s exactly what it should have been.”

In addition to complying with water restrictions from the North Texas Municipal Water District, the city of Frisco recommends residents use water only as needed. To that end, the city operates its own weather station and provides weekly watering advice through its Water Wise program online.

Following that advice the past five years has kept the lawn green at his home of 11 years and kept his utility bill low last summer when six different weeks the recommendation was for no watering at all, Hartwell said.

“We’ve gone over 60 days with less than a 10th of an inch of rain in July and August, and we really haven’t had much rain in September,” Hartwell said.

Frisco has seen the results of that dry spell in citywide water usage of 49.6 million gallons per day (mgd) this August, up from only 24.3 mgd in August 2014, the city staff reports.

City staff members also have seen the results of that dry spell in the flood of calls to Utility Billing and Public Works and have also sought to address the issue at recent City Council meetings and this week’s Town Hall meeting.

“We probably handled 10,000 in the past 45 days,” Assistant City Manager Nell Lange

said earlier this month. “We get a lot of customers frustrated because there’s nobody to take the call, but in Utility Billing you may have 25 calls coming in at one time, and you’ve only got four people to answer calls.”

The city’s phone system asks callers to leave a message, and Lange encourages residents to do just that, because those messages are returned.

Many callers insist that their bills must be in error, but city leaders report that bills are correct and can be blamed on either high usage or leaks.

“We are not in a dark room somewhere figuring out how to raise the bills of our customers,” Mayor Maher Maso said. “Everybody sitting up here [on the Frisco City Council] pays a water bill.”

And all water customers are metered individually, Hartwell said, noting no one’s bill is a result of being averaged with anyone else’s usage.

The video shows Meter Supervisor Ryan Hahn, whose team is responsible for maintaining Frisco’s water meters and testing their accuracy.

“We want to keep that meter accuracy anywhere from 95 to 100 percent,” he said, noting that at 99 percent the customer actually receives one gallon free out of every 100 gallons.

Of Frisco’s more than 49,000 utility accounts, the city staff looked into the 120 flagged as irregular in August.

“None were a misread or an over read,” Peterson said.

The city’s irrigation specialists will come out and perform free checks on sprinkler systems, which can have multiple programs and may be running more often than property owners realize.

“I can tell you during the winter months my wife and I use about 2,500 gallons,” he said, the same amount of water used by operating his sprinkler system once. “So sprinkler systems can really put the water out there.”

The minimum bills for water and sewer increased a combined $3.69 per month.

The North Texas Municipal Water District's director talks about the state of water in the region.

“There seems to be suddenly an outpouring on social media about these very high water bills,” Frisco Councilman John Keating observed. “There’s all this speculation about whether our software is messed up or our meters are messed up.”

Water: It’s a natural resource we must provide, protect, build, resupply and use wisely. Whe…

Improvements planned by the North Texas Municipal Water District will increase capacity there to a permitted discharge of 10 million gallons per day, double what is allowed now, and increase peak discharge capacity to 35 mgd, up from 12.5 now.

“None were a misread or an over read.” – Brett Peterson, city utility billing supervisor

Heavy spring lakes replenished reservoirs and washed away drought-driven outdoor watering restrictions. Instead of once every other week water…

Join Frisco city leaders on Monday for the next Town Hall event.

Visit the city’s website, friscotexas.gov, to find a service map and schedule.

How about some news investigation into water rates going back to 1998? I think what may be discovered is the high costs are actually due to the year after year double digit water rate increases more than anything else.