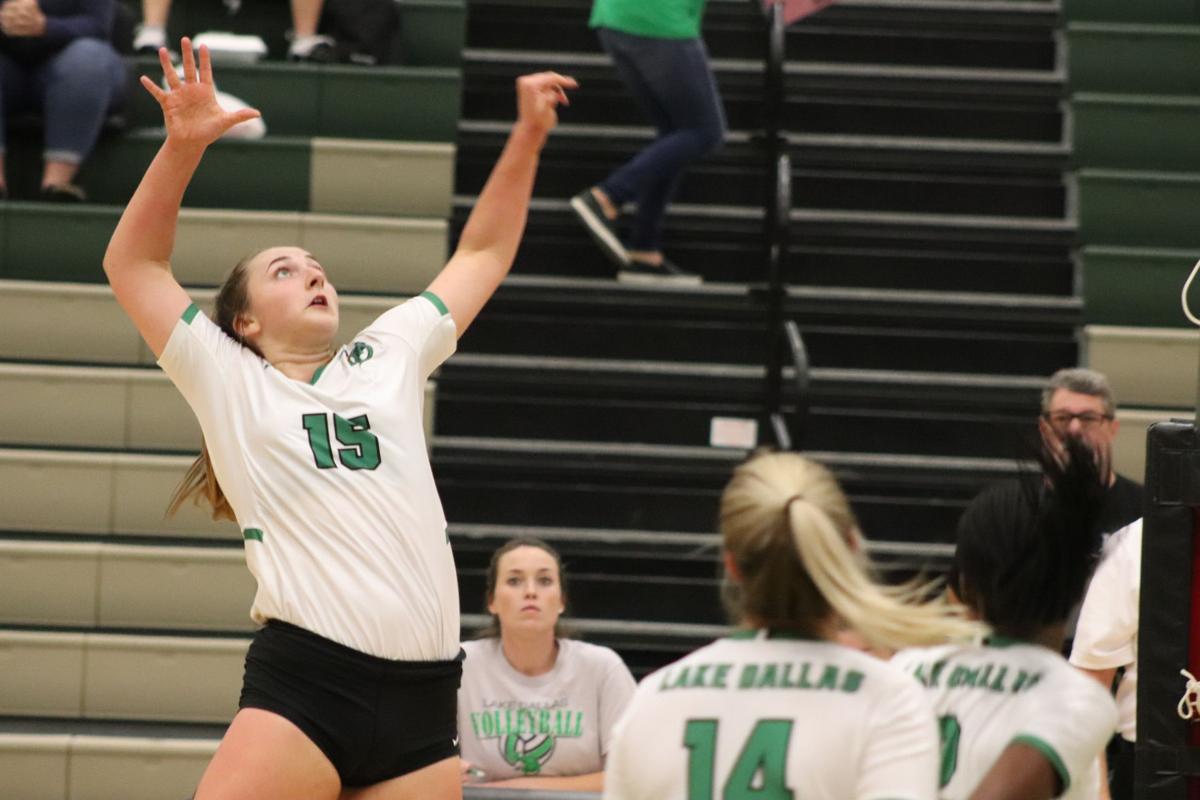 Lake Dallas' Candace Collier looks at the ball while in the air. 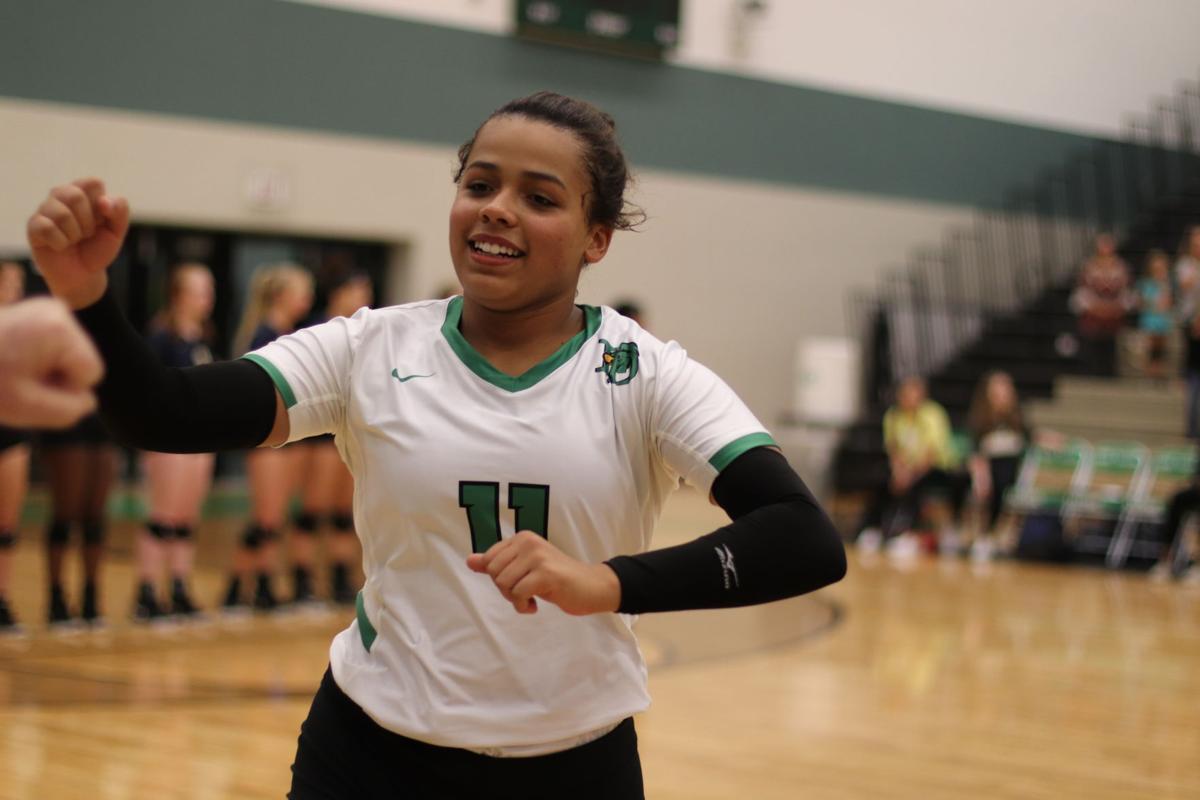 Lake Dallas' Caelyn Gunn exchanges a fist bump with a person in the crowd.

Lake Dallas' Candace Collier looks at the ball while in the air.

Lake Dallas' Caelyn Gunn exchanges a fist bump with a person in the crowd.

Outside hitters Candace Collier, a senior, and Caelyn Gunn, a junior, have been anchors along the front row for a Lake Dallas volleyball team that has made the playoffs in each of the past five seasons.

Collier and Gunn are excited about the positive leadership that head coach Kristin Holbrooks brought to the Lady Falcons in her first season as the helm in 2019, and more importantly, stability to a Lake Dallas program that had three different head coaches in as many years prior to her arrival.

Lake Dallas finished last season with a record of 25-13 and has its sights set on not only competing for the District 6-5A title but also to advance out of the first round of the playoffs.

The Lake Cities Sun recently sat down with Collier and Gunn to chat about Lake Dallas’ new district, the upward trajectory that Holbrooks has the Lady Falcons heading, and how COVID-19 is affecting their club volleyball teams.

What impressed you the most about the way that coach Holbrooks approached her first year as head coach and what made her a good fit for the job?

Collier: She was able to bring the team together and built this chemistry and culture for the team for a Lake Dallas volleyball team that wasn't there in years past. We went to Bridgeport last August for a little team bonding. We went over principles, things upon which we can get better. We stayed at a cabin. We had team-building activities.

We talked about the acronym for our team: F for family; A for aggressive; L for loyalty; C for coachability; O for optimistic; N for never quit; S for selflessness. It was incredible. It was a real nice experience. You could see such a big difference from before.

Gunn: It's more reassuring that we know that she's staying because she made that very clear at the beginning that she wasn't going anywhere. She was here to make us better. To me, she's more than a coach. She's also friend, someone that you know that you can go to.

Not every coach will you have that feeling of security to go to them about a problem that you're having outside of volleyball. It's definitely what coach Holbrooks brings to us.

What was the team’s top highlight last year?

Collier: Our win over Northwest. It was such a good feeling, such a good rush. All of the things that we had done were clicking.

What are your thoughts about Lake Dallas’ new district for the 2020 and 2021 seasons? Colleyville Heritage, Denton, Denton Ryan, Grapevine, Birdville, Richland and Northwest comprise the remainder of 6-5A.

Gunn: I’m so excited about our district. That was the district I was hoping for prior — due to the fact before I moved, Grapevine was in my district. Some of my friends are in the Grapevine and Colleyville districts. Crowds in that district are huge and being able to play in front of crowds that huge will be great.

Who are players to watch out for this season for Lake Dallas?

Collier: Definitely (senior) Lanie Schantz. She's going to be a power for us on the right side. Caelyn Gunn is a really good outside hitter. (Senior) Karen Melvin is a super scrappy setter and she'll go for anything. She's super good on defense.

Gunn: I think there are some players who weren’t on varsity who could make a huge difference. (Senior) Mendi Gomez is looking to be a DS (defensive specialist). (Sophomore Madelyn Hirneise) was on varsity last year but she didn't play a lot. I believe with her getting that varsity experience under her belt, she'll be a lot more comfortable. She's looking for that libero position. (Junior) Ashley Machuca is a good right-side hitter. Freshman Georgia Stinson can be a really good player.

How has the coronavirus has impacted your club volleyball teams?

Collier: It was definitely interesting because it was such a short season. I was really looking forward to it because it was the best team that I had been on. I was excited to be on that team. It was my first year with them. Then all of a sudden, all of our tournaments were getting cancelled, they're going to push it back, our season was going to get cancelled.

But, our coach has done a really good job of trying to keep us in shape. They send us online workouts to keep in shape. Of course, the minute they open the gyms, they had us doing as many small-group workouts as possible. We were getting our touches. Even though there is no club season with them, we still go and get our touches. It's been really good.

Gunn: I played for Lone Star the past two years. Now I’m in Irving. We had two weeks of practice. I think it helped a lot that our coaches (Lake Dallas) were sending the workouts over (Google) Classroom, just to keep people in shape.

Me, personally, I worked out at home. I was keen on nutrition. The whole corona thing put everybody at an equal point. We just want to work that much harder.