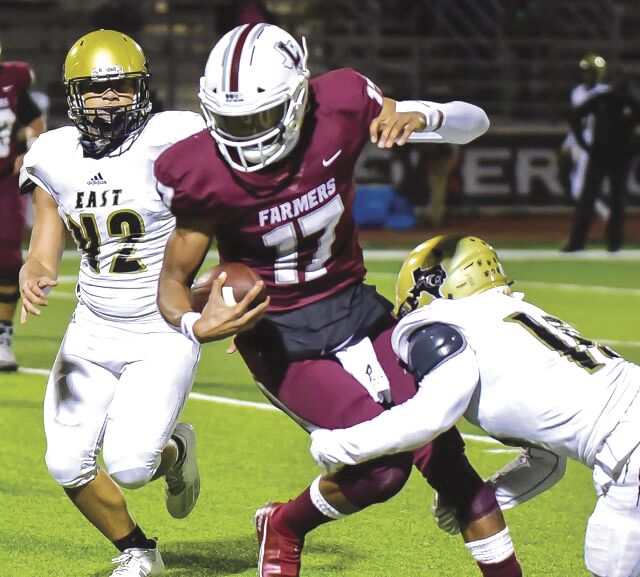 Lewisville’s Taylen Green threw for six touchdowns and rushed for one in the win over Plano East. 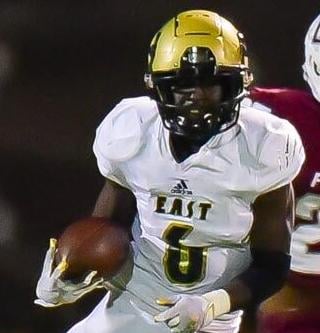 Plano East’s Ismail Mahdi rushed for 334 yards and five touchdowns in the loss to Lewisville.

Lewisville’s Taylen Green threw for six touchdowns and rushed for one in the win over Plano East.

Plano East’s Ismail Mahdi rushed for 334 yards and five touchdowns in the loss to Lewisville.

LEWISVILLE — Quarterback Taylen Green threw for 376 yards and six touchdowns, running back Damien Martinez added 209 yards on the ground, as well as a score, and Lewisville out-slugged Plano East 56-42 in a 6-6A battle Friday at Max Goldsmith Stadium.

Green, a senior committed to Boise State, completed 26-of-29 passes and had a hand in seven of the Farmers’ eight touchdowns. Senior Isiah Stevens and junior Armani Winfield served as Green’s favorite targets and the trio connected a combined 19 times. Stevens hauled in three touchdowns and Winfield tallied two.

“I love the vertical passing game, but if they’re going to give us the quick stuff, we need to take it, too,” said Michael Odle, Lewisville head coach. “Our receivers did a good job on the outside. We’ve got [Martinez] in the middle they have to account for and, of course, Taylen as well.”

Martinez quietly amassed his 209 rushing yards and his 17th and final run of the evening for 53 yards granted him his only touchdown of the game. The junior averaged over 12 yards per carry.

“[Martinez’s] a complete player,” Odle said. “I’m glad he got [the touchdown], but at the end of the day, he wants to win and he’s unselfish and a great teammate.”

The Farmers (3-2, 1-1) hit the air early with Green completing his first five passes which included a 31-yard strike to junior wide receiver Brent Allen. Green added a 5-yard rushing score to counter an East touchdown and the Farmers led 14-7 with 4:44 to play in the first quarter.

Winfield and Green found a rhythm early and the junior wide receiver accumulated 127 receiving yards on seven receptions in the first half. Two of the catches resulted in first-half scores from 19 and 69 yards.

“You definitely want to get everybody involved,” Odle said. “At the end of the day, we have to take what the defense is giving us. [Green] drives the car and he did a good job getting his receivers involved, getting the running game going and taking the deep ball when we had the chance.”

East’s offense relied on the legs of running back Ismail Mahdi. The junior recorded five of the Panthers’ touchdowns on his way to 334 rushing yards. Four of the touchdown runs came on bursts of 57, 41, 50 and 73 yards.

The Panthers (0-5, 0-2) saw multiple opportunities to tie the game in the first and second quarters, but two red-zone fumbles halted the threats. Lewisville recovered the first fumble in the end zone and took advantage of Mahdi’s second giveaway on the Farmers’ 7-yard line.

“To get those turnovers were huge,” Odle said. “It gave us a cushion and it allowed us to extend it to 14 there before the half. The defense made some stops. We’ve got some things to clean up, but there were a lot of positives.”

A touchdown called back by a penalty and two blocked field goal attempts did not help Plano East’s cause either.

The Panthers’ fumbles came during a stretch of four consecutive drives ending in turnovers by both teams.

“I felt like we did a pretty good job up front,” said Joey McCullough, East head coach. “[Mahdi] made things that didn’t look good and he used his burst and his speed. We use him in so many ways. He’s a strong kid. He was not happy about the fumbles, but he’s just an unbelievable kid. For a small guy, he’s pretty fast and pretty strong.”

While Mahdi ran at will, the passing game never developed for the Panthers. East began with senior quarterback Dylan Hayden and switched to sophomore Harris Boyd after halftime. Hayden finished 7-of-18 for 91 yards and Boyd contributed 38 yards going 6-for-12.

The lone Panther passing touchdown came on a 7-yard pass from Boyd to senior wide receiver Kaden Gardner with 9:59 left in the game.

After the Panthers cut the deficit to eight points in the third quarter on Mahdi’s third touchdown, the Farmers rattled off 14 straight points to go ahead 42-20. Both scores came courtesy of Green to Stevens.

The teams traded two scores apiece the rest of the way and Lewisville never let it get close again.

Lewisville will go for a winning record in district play when it travels to Flower Mound for a 7 p.m. kickoff on Friday. Plano East will host Plano West at 7 p.m. at Kimbrough Stadium.