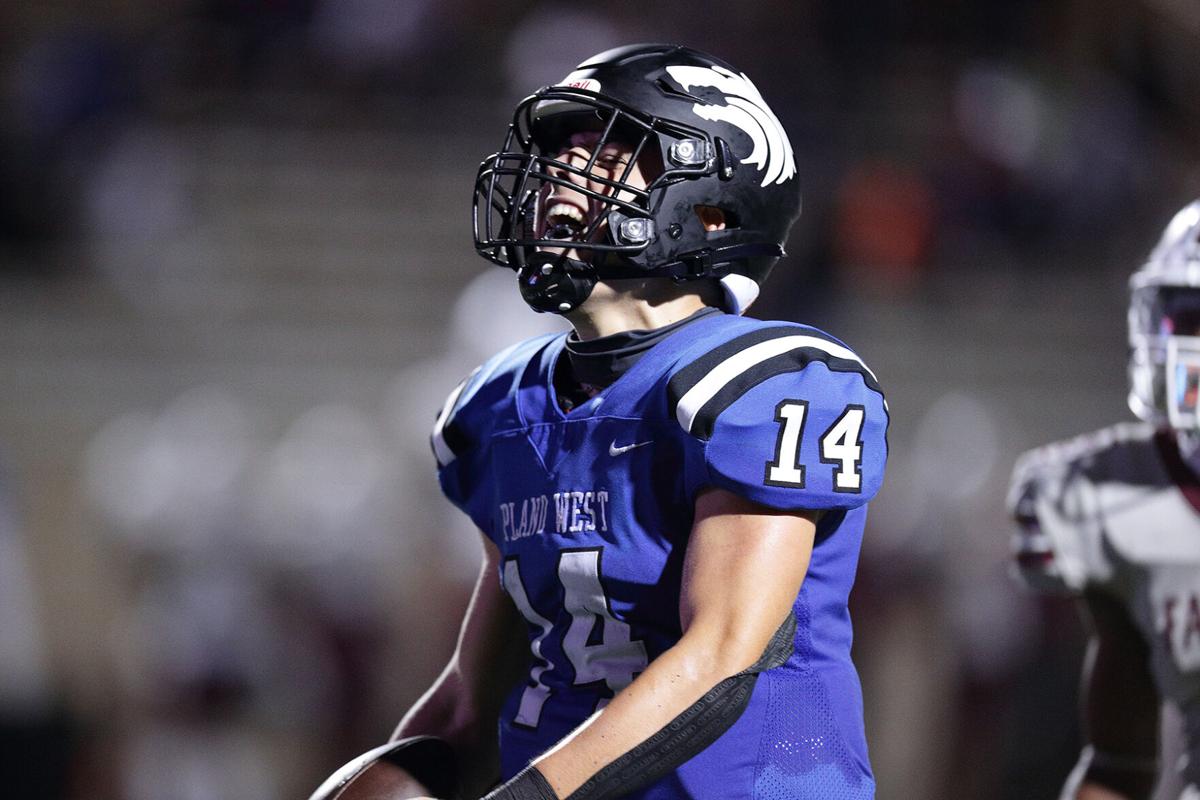 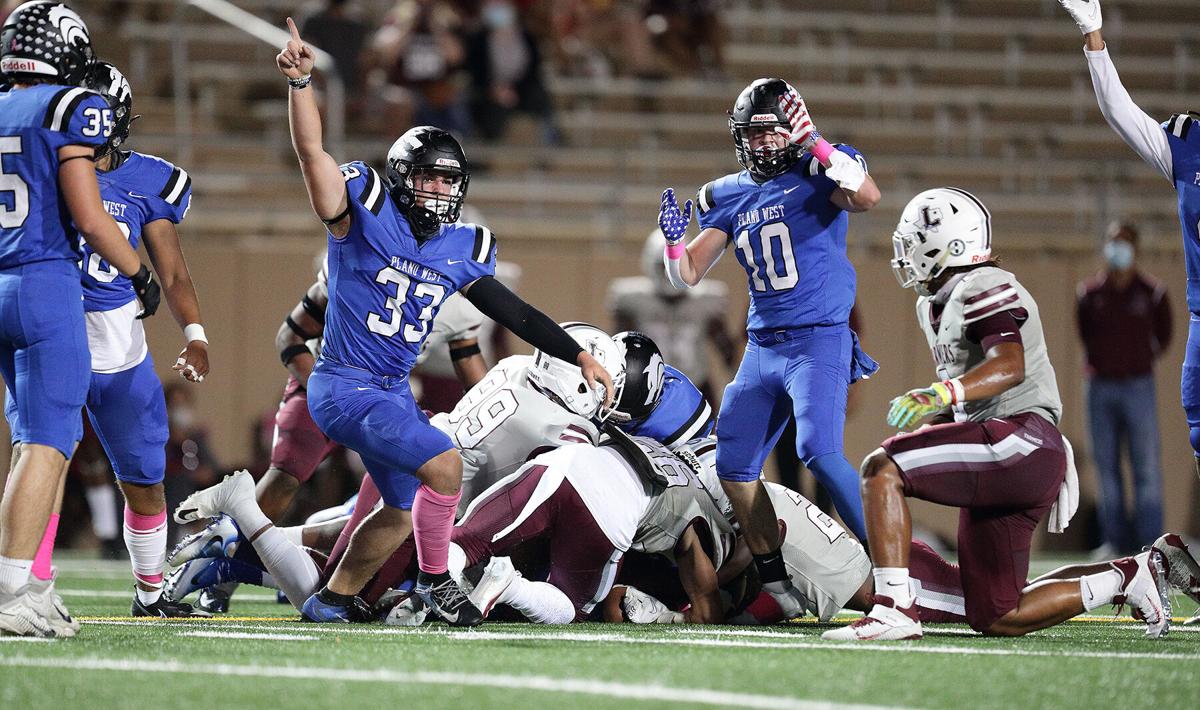 PLANO — For all the emotion that encompassed the Plano West football team’s stunning, come-from-behind victory over Plano East last season, a win that snapped a 34-game losing streak, Thursday’s District 6-6A opener sparked a completely different feeling for the Wolves.

With Lewisville marching near midfield entering the fourth quarter after a commanding start to the second half, West turned in the finest hour of head coach Tyler Soukup’s brief tenure with the program.

The Wolves kept the Farmers, who entered Thursday’s ballgame averaging more than 50 points per game, off the scoreboard over the final 18 minutes of game time and mustered 14 unanswered points in the fourth quarter for a 27-17 victory at Clark Stadium.

Sending a shot across the bow to begin the 6-6A schedule, West improved to 3-1 on the season and 1-0 in district. Lewisville had a two-game win streak snapped, dropping to 2-2, 0-1 on the year.

“Outside of the monumental nature of the East win, just letting the air out of that losing streak and putting that behind us, it was an enormous win for us,” Soukup said. “But this showed the kids that if they execute a game plan and believe in it, and there’s a collective trust between the kids and coaches, we can come out and beat most people.”

It was a place West had been before under Soukup — playing teams close for three quarters, as the Wolves did last year against foes like Plano and McKinney — only to be undone by mental miscues and lapses in execution late in the ballgame.

With Lewisville leading 17-13 entering the fourth quarter, it was instead the Wolves who hit all the right notes.

West limited the Farmers to just 21 yards over the final eight minutes and found the end zone on its last two possessions to seize momentum. A 10-play drive midway through the quarter was capped by a 21-yard sprint by sophomore Dermot White for a 20-17 lead with 5:22 to go. White handled rushing duties for the Wolves for the entire second half following a quad pull by senior Tabren Yates.

“Over the last two weeks, our staff has been talking about wanting to get [White] the ball more,” Soukup said. “Every time we did, we realized how much we needed to get him the ball. It was pretty clear tonight. He’s pretty talented.”

Plano West 20, Lewisville 17 @ 5:22/4QWoah!! Backup RB Dermot White has seen plenty of time this half with Yates out. He finds the end zone on a 21 yd run and the Wolves retake the lead! pic.twitter.com/GDQO9fkTCg

The Farmers turned the ball over on downs on their ensuing series, albeit not without a bit of controversy after a fourth-down pass from senior Taylen Green to senior Shamarian Smith was ruled 1 yard short following the spot. The running back appeared to be tackled at the first-down marker.

“Just a missed call,” said Michael Odle, Lewisville head coach. “He’s a dang good ref who did a good job all night … had a spot and when they threw the ball in and he redid the spot, it was off. It was a miss, but that isn’t why we lost the game. I made way more mistakes than that guy.”

Didn't get a chance to post it during the game, and what's done is done, but this was the controversial turnover on downs by Lewisville late in the 4th quarter that was ruled 1 yard short. https://t.co/rmgwaEz54v pic.twitter.com/3Q6tgJWNs8

West capitalized moments later. Despite being backed into fourth-and-13 from the Lewisville 33, the Wolves kept their offense on the field and instead turned to sophomore backup quarterback Vance Feuerbacher, who found a cut-back lane and iced the victory with a 33-yard touchdown run with 1:32 to play.

“We debated whether to punt it — I think we would have gained only 15-20 yards — and we know [Feuerbacher] is a dynamic athlete if he gets out in space,” Soukup said. “I didn’t expect the cut-back, but thought he might get a first down if he got in space. You can never predict what happens there, but it was a run-pass option and we put it in the hands of a gifted athlete and hoped for the best.”

The Wolves’ signature victory under Soukup was within reach all night long. West never trailed by more than seven points, limiting the high-powered Farmers to a single touchdown in the first half — an acrobatic, 33-yard snag by senior Isiah Stevens for a 7-0 lead with 3:33 left in the first quarter.

West’s defense stiffened up from there — particularly against the pass, routinely making things uncomfortable on Green, who threw for just 142 yards on 14-of-29 attempts. That, coupled with penalties and lapses on special teams, precluded the Farmers from tacking on anymore points until the second half.

“Kudos to them. They controlled the clock and we weren’t playing catch enough. Penalties hurt a lot, too,” Odle said. “We had four holding penalties, some key false starts and kept getting behind the chains. Against good teams, that kind of stuff catches up to you.”

Lewisville 7, Plano West 0 @ 3:33/1QWhat a catch by WR Isiah Stevens!! He hauls in a throw from Taylen Green to log a 33 yd touchdown and get the Farmers on the board 1st. #SLMGridiron pic.twitter.com/kofyNhMcIY

West, meanwhile, made its intentions know from the start. The Wolves were patient and made it a point to use the clock at every cost against the high-powered Farmers. The approach staked West to a 13-7 lead at the half, scoring on back-to-back possessions in the second quarter.

Following Lewisville’s touchdown, West found the end zone on a 27-yard strike from senior quarterback Greg Draughn to senior receiver Jackson Stambaugh — a pass the signal-caller uncorked just as the Lewisville pass rush was closing in to find his target all alone in the end zone.

One series later, after the Farmers lost a fumble near midfield on a fake punt attempt, Draughn and the passing game struck again — this time on a third-and-11 conversion that wound up producing a 53-yard touchdown from Draughn to senior Jabrayden King-Woods for a 13-7 advantage with 7:49 left in the half.

The Farmers showed a bit more punch in piling up 10 points in the third quarter, riding the legs of junior Damien Martinez to retake the lead on an 8-yard run just over 90 seconds into the second half. Junior Julio Perez tacked on a 29-yard field goal for a 17-13 lead later in the frame.

Martinez impressed in defeat with 193 rushing yards on more than 9 yard per carry, while Stevens paced the receiving corps with five catches for 96 yards. West was led by 168 yards through the air from Draughn, while White tallied 55 rushing yards, and King-Woods piled up 68 receiving yards.

“We’ve got to look ourselves in the mirror,” Odle said. “This is a gut-check for us. We’ve got to handle adversity and not be front-runners. At the end of the day, you’re going to have play well to beat good teams. Coach Soukup does a great job and anytime you’ve got guys that fly around on defense like theirs, we knew if their offense could get first downs that they could put pressure on us, and they did. We responded at times but just didn’t play well enough to beat a good team like that.”

The Farmers look to bounce back at 7 p.m. Oct. 30 when they host Plano East. The Wolves, meanwhile, look to stay hot for a trip to Coppell that same time.

“There’s not many that have believed in us other than us. But that’s OK, I know where we came from,” Soukup said. “I couldn’t be more proud of these kids. That’s a really good Lewisville team and we had a couple weeks to prepare, which always helps. We had a plan on both sides of the ball that we felt good about, but it has to come together, and it feels really good when it does.”