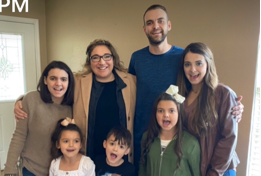 “Supernanny” Jo Frost is pictured with the Robertson family. 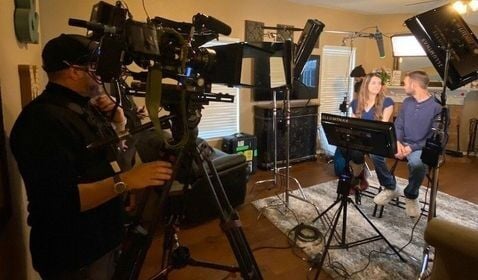 A crew shoots an interview with Megan and Jonathan Robertson

“Supernanny” Jo Frost is pictured with the Robertson family.

A crew shoots an interview with Megan and Jonathan Robertson

Sometimes superheroes arrive in the form of a nanny.

Lifetime Channel’s, “Supernanny,” Jo Frost landed in January at the Crossroads home of Jonathan and Megan Robertson, bearing insightful tips and suggestions for the overwhelmed family of six.

The Robertson’s were seeking guidance in ways to steer their children away from outside influences such as video games and IPads and sought direction in navigating an often busy household.

“We needed alternatives. We wanted to “unplug” from electronics and spend more quality time together as a family,” Megan said.

The new age Mary Poppins, minus the signature carpetbag and umbrella, brought new approaches and instructions on developing routines, schedules and ideas for establishing a discipline and reward system.

The Robertson’s – Megan, 30, and Jonathan, 32 – married for 13 years, first met in eighth grade when both attended Lake Dallas Middle School in Lake Dallas.

“We met in eighth grade but really connected in 10th grade, and we’ve been together ever since,” Megan said.

Frost spent the first few days of filming silently observing and assessing the Robertson family dynamic from a distance.

The days that followed included discussing what Frost had seen and heard and then offering tools and recommendations necessary to achieve the results the Robertson’s sought.

Spending a 10-day period with the family, Frost arrived daily for continued examination and information gathering.

The family, Supernanny, and a film crew visited The Little Elm Public Library where the family was introduced to the many library resources and were each given library cards.

According to the library manager, Lynette Roberson, the show’s segment producer Bianca Cockrell contacted the library in January to ask about filming an episode there, stating the show wanted the family interacting in different locations which included the library.

When asked what the biggest take away from the experience was, Megan laughingly stated, “that cooking, cleaning and household duties are not gender specific.”

“I had begun to feel like I had no voice and that I wasn’t being heard. We’d all get caught up in the chaos of the day and the frustration would hit,” she added. “Jo pointed out so many things I wasn’t even aware of. It was a little embarrassing to be called out, but she explained diplomatically that Jonathan and I had to work together to make it work. We had to speak to the children on their level and most importantly we needed to offer alternatives to electronics.

“Jo sat us on a course of establishing routines and rewards,” Megan said. “The children have limited time on their devices now and only then after all school work is done and chores and responsibilities are addressed and completed.

“Jonathan now helps out with the household necessities more. I had to learn to delegate, and he learned to initiate some of the cooking, cleaning, and upkeep of our home,” she said. “We’ve accomplished more balance, thereby allowing for more family time.”

"Nanny Jo was awesome. At first, I was nervous but she was so nice and really wanted to help us,” Presleigh said.

“The experience was incredible and I am enormously grateful to the show and to Jo,” Megan said. “My home has calmed, is far more relaxed and we are in tune with our kids.”

The Robertson’s episode of Supernanny aires at 8 p.m., Sept 15 on the Lifetime Channel.