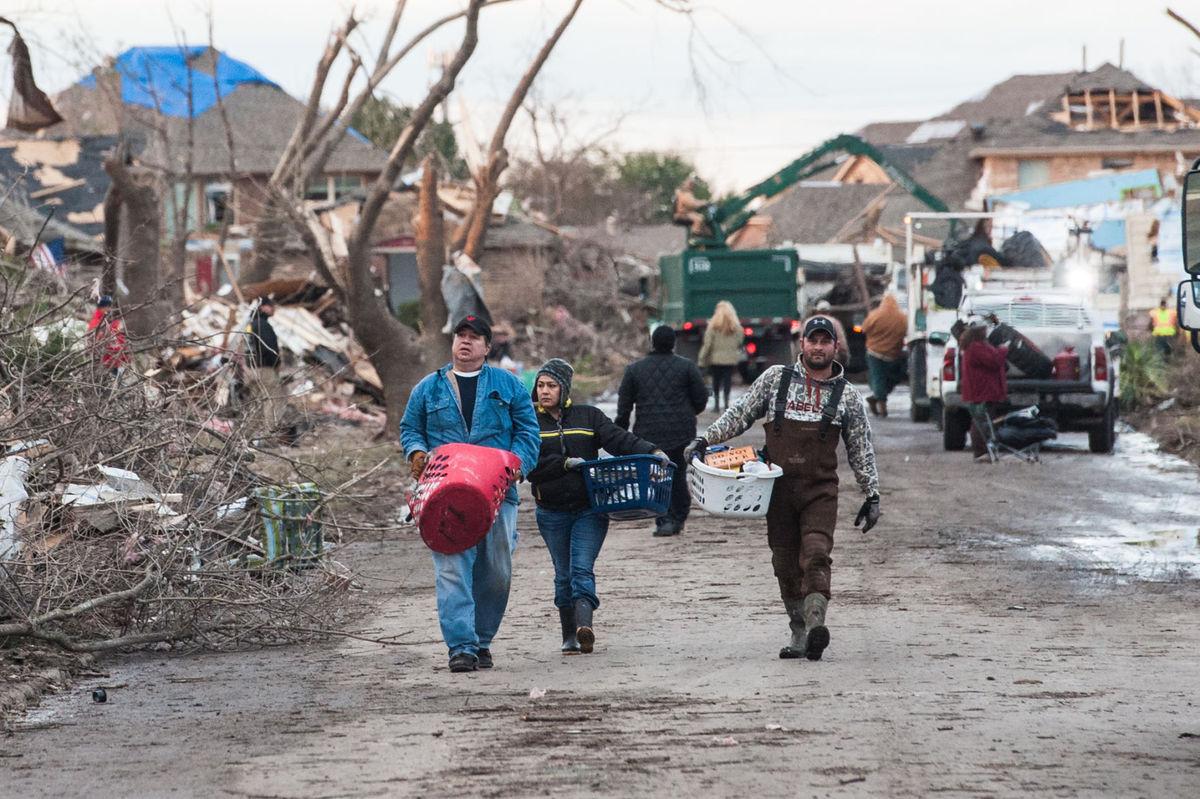 Volunteers and emergency response crews have been on site daily helping with cleanup in Rowlett, the city hit hardest by tornados Dec. 26. Two McKinney-based nonprofits have been a steady relief presence, too. 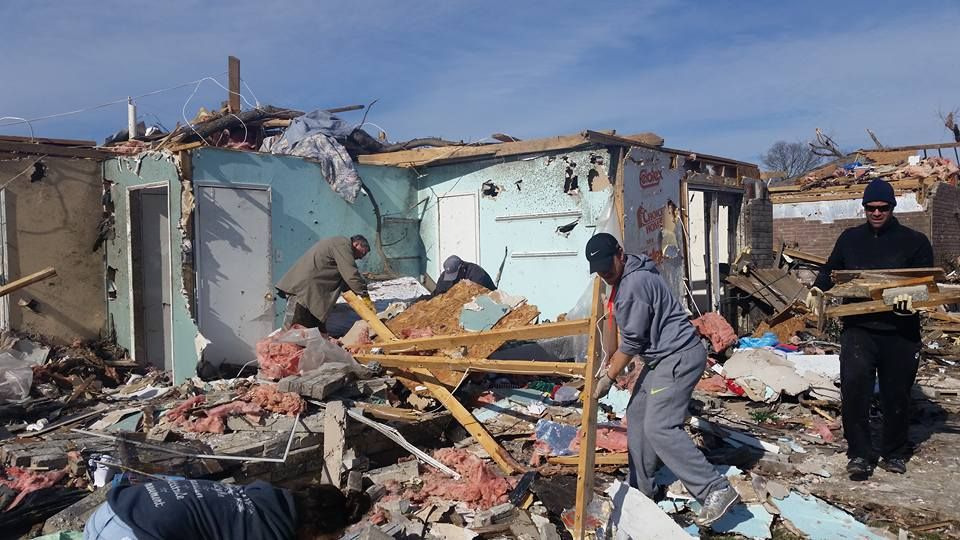 Volunteers with McKinney-based Step Up Disaster Response help sort through debris at a house in Rowlett this week. Step Up, still a relatively young nonprofit, was formed for such situations. 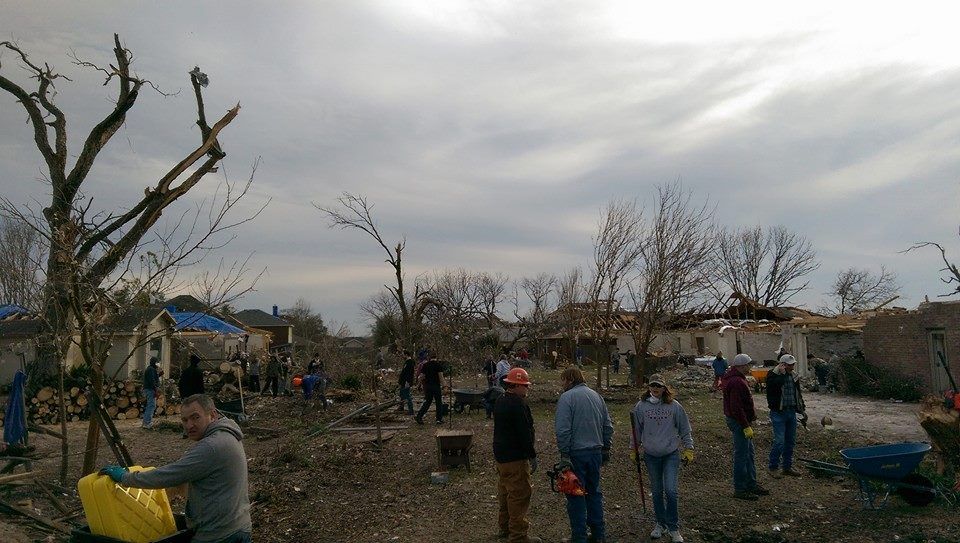 Step Up Disaster Reponse Team, of McKinney, had volunteers work their way around Rowlett. It's going to take an entire village - several, rather - to clean up and salvage parts of Rowlett, and that's the attitude hundreds of volunteers have taken.

Volunteers and emergency response crews have been on site daily helping with cleanup in Rowlett, the city hit hardest by tornados Dec. 26. Two McKinney-based nonprofits have been a steady relief presence, too.

Volunteers with McKinney-based Step Up Disaster Response help sort through debris at a house in Rowlett this week. Step Up, still a relatively young nonprofit, was formed for such situations.

Step Up Disaster Reponse Team, of McKinney, had volunteers work their way around Rowlett. It's going to take an entire village - several, rather - to clean up and salvage parts of Rowlett, and that's the attitude hundreds of volunteers have taken.

In what was one of Dallas-Fort Worth’s more terrifying storms in recent history, McKinney and Collin County’s other largest cities came out of the winds unscathed.

Rowlett and Garland in Dallas County took the brunt of it: the largest of multiple tornadoes, an EF4, impacted about 1,000 homes, demolishing around 150. In total, the storm killed at least 11 and injured dozens of others, authorities said.

Many in mostly untouched neighboring cities didn’t just count their blessings and let out a collective “phew.” As has become custom, McKinney jumped right into action.

Volunteers and helping hands’ immediate focus was on Farmersville, Copeville, Blue Ridge and the portions of Collin County that did get hit. See a video showing the destruction in the Collin County area.

McKinney-based Minuteman Disaster Response had been tracking the storms and was “on scene almost immediately,” said Matt Payne, the disaster-relief nonprofit’s executive director.

Minuteman started back in 2011 following the Joplin, Mo., tornado of which the whole nation was quickly aware. Two team members have a combined 30 years of emergency response experience, and Minuteman now works a 400-mile radius.

They worked through the night Saturday and Sunday morning, and helped run an operations center for community emergency response teams (CERT). Such trained volunteers came from all over, even forcing Rowlett officials to turn some away.

The McKinney Fire Department’s Capt. Charlie Skaggs took the lead over more than 250 CERT members in Rowlett as they canvassed street to street, home to home.

The Minuteman crew is fully and extensively trained, making them ideal first-responders to such a natural disaster. “You can train and train and train, but nothing’s like the real deal,” said Payne, who used to be a pastor. He transitioned to a more hands-on position for helping others in need.

RPM, a local construction company, lent its heavy machinery and equipment to sort and extract debris. And residents could discard any storm-related debris for free at the county landfill in Melissa all week.

“I’ve never seen that before,” Payne said of the free contributions. “To really do it all for free was just over the top.”

Minuteman’s Facebook page gained more than 400 “likes,” and through it raised over $700 almost immediately.

Step Up Disaster Response Team, another McKinney-based nonprofit, quickly joined the response as well. It garnered donations online and in person, some necessary (hygiene items) and others not so much (foosball table). But many donated nonetheless: work gloves, trash bags, diapers and more.

“They’re bursting at the seams,” said Matt Hilton, founder and incident commander for Step Up, explaining how only certain items were being accepted by week’s end.

Hilton got the volunteer bug after doing similar relief work in Joplin. Last weekend’s storm “doesn’t even compare” to Joplin’s destruction, he noted. Minuteman and Step Up have been there to respond every step of the way this time around.

“It’s seeing the people and crying with them and helping them,” Hilton said. “That emotional response keeps you going for hours on end.”

Down the Collin County corridor a bit, Plano also stepped up to the response. Plano’s Department of Emergency Management (DEM), responsible for planning response to and recovery from storms and natural disasters, is showing its support for its North Texas neighbors stuck by deadly tornadoes Saturday.

“We can get firefighters and police officers and public works folks to help with earth-moving equipment, but skilled technical assistance that we need in the EOC is where we’re seeing a lack of resources,” Little said. “And oftentimes, when we have a disaster event within the region as a whole, multiple cities will be affected.

“This disaster is one of the first events in which we have a specific group of cities that are affected where others aren’t affected at all, so we can send that skilled technical assistance over and provide those resources that they so desperately need,” Little said.

According to Little, a call went out to the whole region asking for help, and Plano’s DEM sent staff members to Rowlett and Garland. They have been primarily assisting in Garland, as Little was there Saturday night into Sunday morning, and another staff member spent most of Sunday there.

“Being able to rely on peers and colleagues for assistance, knowing they have the same expertise as you, helps you to rest a little bit easier when it comes your turn to do so,” Little said. “We are few but mighty."

Haley Rogers and Amber Hamilton contributed to this report.

With Rowlett in a lengthy recovery mode a couple of weeks after a devastating tornado, Collin County cities including Frisco are among those p…