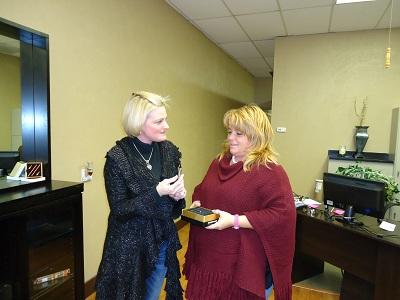 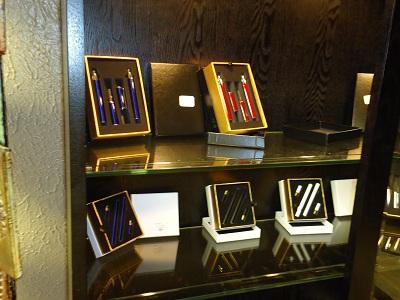 Chris Beattie/Staff Photo - Electronic cigarettes contain flavored nicotine but not the carcinogenic chemicals present in regular cigarettes. The battery-powered units allow users to smoke without the odor, cost and hassle of tobacco-filled cigarettes.

Chris Beattie/Staff Photo - Electronic cigarettes contain flavored nicotine but not the carcinogenic chemicals present in regular cigarettes. The battery-powered units allow users to smoke without the odor, cost and hassle of tobacco-filled cigarettes.

Unless you're smoking electronic cigarettes, through which the shame, smell and potential for cancer nearly vaporize into thin air.

Testament to the growing trend is The Vapor Bar, an electronic cigarette shop that opened Jan. 9 in McKinney. Its wares include batteries, cheesecake-flavored nicotine and "units" that trump pack-a-day costs by hundreds of dollars.

"I'm not saying that this is healthy, but you're getting rid of about 4,800 chemicals and going straight to nicotine," shop owner Schell Hammel said of e-cigarettes. "When you're talking about comparing this, apples to apples, with cigarettes, I'd much rather someone smokes this every day and twice on Sunday than smoke another cigarette."

Without the "e" attached, the vapor units sound just like their Marlboro or Camel cousins. The addictive drug, nicotine, remains.

What's left out of e-cigarettes are those chemicals — arsenic, formaldehyde, carbon monoxide — that make doctors cringe. Cigarette smoke indeed contains about 4,800 chemicals, 69 of which are known to cause cancer, according to a 2004 Centers for Disease Control and Prevention report on tobacco use in the United States.

"Smoking is directly responsible for approximately 90 percent of lung cancer deaths and approximately 80-90 percent of emphysema and chronic bronchitis deaths," the report says. Similar statistics have infiltrated school classrooms, health circles and advertisements for many years, though, and people still smoke.

For those like Hammel, a 22-year cigarette smoker, quitting isn't an easy option. Keeping the same habit, minus the carcinogens, is much less intimidating.

"It's for those who want to get rid of the cancer-causing agents and go straight to something that's got the nicotine but not the rest," Hammel said. "And you don't have the second-hand smoke that is killing everyone around you."

The Vapor Bar mostly sells high-quality, premium e-cigarettes — Riva-T models — along with more than 40 e-liquid flavors, including chocolate, blueberry cheesecake and even tobacco flavor. Users squeeze the nicotine-containing liquid into the clearomizer, attach the battery, and they're ready to smoke.

When they push a button on the pen-like unit, the battery fires a coil that burns the liquid, and propylene glycol, the same delivery system used in inhalers and nebulizers, causes it to vaporize.

"It hits you in the back of the throat just like a cigarette would," Hammel said. But the vapor they blow out is mostly odorless, aside from the occasional cinnamon or peppermint smell.

After trying an e-cigarette in October 2010, long before she opened the McKinney shop, Hammel put down regular cigarettes, and hasn't touched them since. Her dad, a 40-year smoker, is now another e-cig enthusiast.

Determined to stray from the cheaper e-cigs sold at mall kiosks, ones that Hammel said won't do the trick, she researched and tested more than 20 different e-cig units. The Vapor Bar sells her ultimate choice, the Riva-T, for about $100, including two chargeable batteries, the burner and an e-liquid capsule that typically lasts between 2-6 weeks, depending on the smoker.

Hammel said that because the shop offers better quality, customers have already come from all over Collin County.

Early on, e-cig users will treat their newfound contraption like a "pacifier," she said, constantly nursing it because it never goes out. After a while, though, they "lose that mentality of 'I need to smoke it all the way down.'"

Her older sister, Wendii Roberts, manages The Vapor Bar. A 28-year smoker, Roberts quit regular cigarettes Dec. 26. She's lost four pounds since the switch, and said she "doesn't miss them at all."

"All of us have gone through one or the other methods trying to quit, and nothing has worked," Roberts said, referencing nicotine patches and Chantix, a medication commonly prescribed for those eager to quit smoking. "Every single thing I did, I gained weight, and when you're short and somebody says gain weight, you run."

The sisters understand that smoking e-cigs isn't quitting, but they say it's better than the alternative. Three of their grandparents died from lung cancer, one who forced his way outside to smoke even while in the hospital for the disease.

"This is a passion for me, that we can at least try to prevent others from going down that road," Hammel said.

The chemicals are vacant, and The Vapor Bar can control how much nicotine is in the e-liquid, allowing customers to wean off of the addiction, too.

First, though, is kicking the "nasty" parts of the habit.

"It makes me feel good because I'm giving a product to someone that can actually better their life," Hammel said. "My goal is when people truly have it in their head that they want to go to electronic cigarettes, they will have no reason to go back."

The Vapor Bar is located at 141 S. Central Expressway, near Virginia Parkway in McKinney. Customers can also purchase electronic cigarettes and kits online at www.thevaporbarstore.com.

Indeed, these days people find other alternatives to normal cigarettes, like the electronic cigarette or the vaporizers. People choose these products for various reasons, but the most common one is that they want to quit smoking tobacco. These vaporizers are often bought by those people who want to change their smoking habit and some of them start by buying a quality vape starter kit.