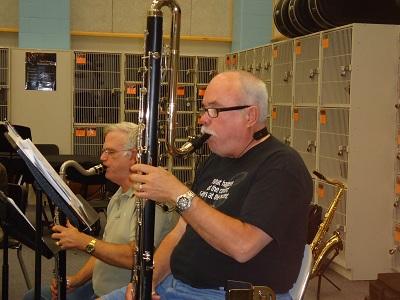 Chris Beattie/Staff Photo - Bass clarinet player Emil Kirberg, left, and contra bass clarinet player Mike Creider anchor down the back-right section of the band during rehearsal. In five years, the band has grown from two men with a vision to 45 core members, and it includes a flute choir and dance band. 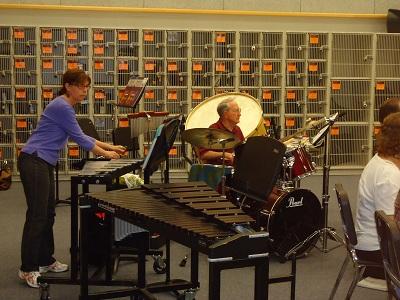 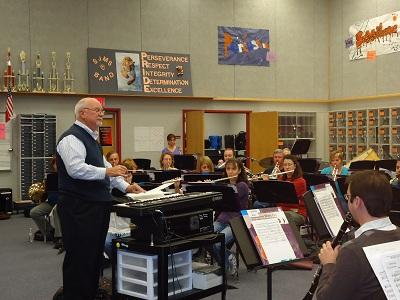 Chris Beattie/Staff Photo - Bass clarinet player Emil Kirberg, left, and contra bass clarinet player Mike Creider anchor down the back-right section of the band during rehearsal. In five years, the band has grown from two men with a vision to 45 core members, and it includes a flute choir and dance band.

An unassuming melody resonates down the halls of Scott Johnson Middle School every Thursday night. Doors are locked, lights are dim, yet music remains.

Not students, but people in their 20s, 50s and 70s are the source of the sound. The McKinney Community Band plays its own tune.

"A lot of us really look forward to Thursday nights," said Bill Sleeper, co-founder and director of the city's own concert band. "We don't think about daytime activities — we just play and do our thing."

They've been doing so since 2006. What began as a musical whim has steadily become a city symbol, its ranks expanding every year.

Sleeper and Ed Schwarz, a retired aerospace engineer and the band's drummer, loved band, and they knew others in McKinney must, too. Those eager to dust off their trumpets or clarinets, others who still played but missed the band-day fun — they were everywhere but together.

Determined to change that, Schwarz planned an all-out pitch, and he and Sleeper brought their charge to Bill Whitfield, McKinney mayor at the time. The former dignitary spoke first: "I know why you're here, and I think it's a great idea."

Just weeks later, in the summer of 2006, the new founders were asked to perform at the Ice Cream Crank-Off in downtown McKinney. They didn't have music, players or instruments — just the name and idea.

"It was kind of cobbled together. I invited some musician friends from other bands, called up some of the newspapers and gathered a few people for rehearsal," Sleeper said. "A couple months later, we had our first concert."

Since then, the McKinney Community Band has grown to 45 core members — music majors, professional musicians, former military band members — most who rediscover the spark that got them started. They average 11 performances a year, including several at the McKinney Performing Arts Center (MPAC).

The dance band and flute choir are sub-sections of the concert band, and each have a special role at events around the community. There are no auditions, just ability and desire.

"You can't relive your glory days," said Marsha Hope, vice president of the band. "It doesn't matter if you were the best French horn player 20 years ago, because you might not be now."

What members do relive is the fun, at every rehearsal in the band hall at Scott Johnson and at every concert. Sleeper conducts a full band that plays swing, jazz, symphony, any music of their choice.

Whether it takes them back some years or simply takes them away for a few hours, the band is like a tuneful tune-out for many.

"It's such a great relief for even the seasoned performer," said Carlos Chipps, the band's president and former band director at Scott Johnson. "The band is fun itself, just because of the type of music we play and the performances. It's a huge stress relief."

The city helps alleviate the band's financial strain. The McKinney Arts Commission gives the band a grant each year, which helps pay for administration, instruments, microphones and sound systems.

Sleeper said the band "seeks its own level" for section leaders and fosters natural cohesion. Those not advanced enough or over-advanced may steer away, but the skill and family atmosphere stays.

"We kind of have our little niche and style," Sleeper said. "We try to fit right in between."

The band performs for and interacts with its audience, following Sleeper's lead. It played TV theme music at its last concert and encouraged audience members to write down the songs they knew. Of the people with the right answers, some were chosen out of a hat to direct the next concert.

Band members sit nearly arm's length away from the front row during MPAC shows. They welcome listeners into the performance.

"It takes the snobbery out of our performing," Chipps said. "It's not so suit-and-tie, but it works."

The flute choir and dance band will perform at 7 p.m. on consecutive days this weekend, Oct. 28-29, at Chestnut Square, as part of the first-ever Music in Motion event. Other upcoming gigs include private holiday shows and a performance at the Heard Museum's Trail of Lights.

Some sections are so packed the band must turn away potential newcomers. It needs low-brass musicians and percussionists to fill the back line.

Regardless, the mid-week melodies should continue at Scott Johnson. The city's music must go on.

"Anybody can become a part of our concerts," Chipps said. "That's what this is all about — bringing the love of music to McKinney."