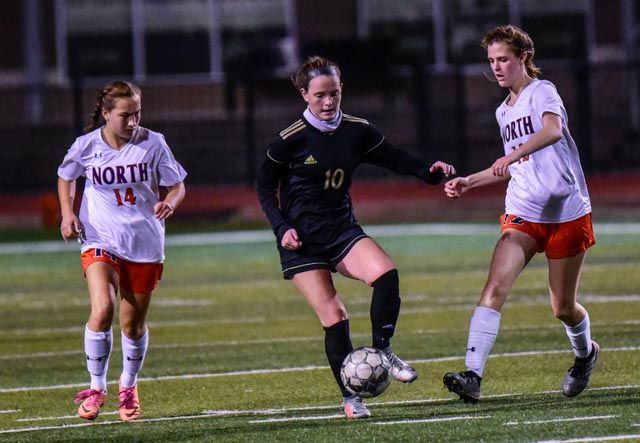 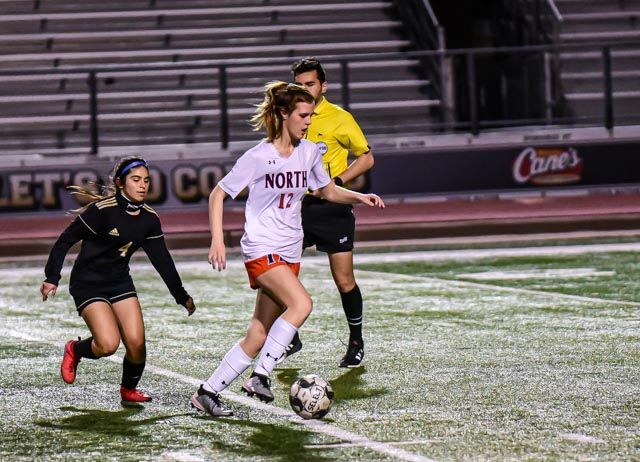 THE COLONY – The right to earn third place in District 10-5A came down to a pair of goalkeepers.

After The Colony and McKinney North combined to make each of their first nine attempts during the shootout portion of Friday’s match at Tommy Briggs Stadium, McKinney North freshman goalie Morgan Paley looked to make it 10 straight makes. Paley stepped up to the penalty line to attempt a kick against her counterpart, The Colony sophomore goalkeeper Cadence Tischler.

Paley struck the ball well, but it bounced off the left post.

Tischler’s teammates stormed the field and ran to their goalkeeper to celebrate a 2-2 victory [5-4 penalty kicks].

The Colony wrapped up third place in 10-5A with the win, while North will enter the Class 5A playoffs as a No. 4 seed.

“I am so proud of my teammates,” Tischler said. “They have shown more and more resilience throughout the season. We’ve been able to come back from bigger losses.”

The shootout win capped off a big rally for the Lady Cougars, who trailed 2-0 after two goals by Lady Bulldog junior forward Karinna Purser.

North dominated play through the game’s first 25 minutes. The Lady Bulldogs were quicker to the ball and generated several quality scoring chances, including back-to-back corner kick by Purser. Both shots, though, were stopped by Tischler – the first one she punched out of harm’s way with her hand and the second kick she made a diving stop.

North’s persistence finally paid off in the 15th minute.

Purser converted a penalty kick to put the Lady Bulldogs ahead, 1-0.

Ten minutes later, McKinney North senior captain Sofia Federico slipped a nice pass to Purser, who used her speed to outrun The Colony defense and kick the ball into the back of the net to increase the Lady Bulldog advantage to 2-0.

“The energy was there,” said Lance Lovell, McKinney North head coach. “Karinna is a special player. She gets herself in a position to really put some balls into the back of the net, and her finishing ability is really top notch.”

On the other side of the field, The Colony head coach Tommy Ray was looking for a spark. His Lady Cougars had recorded only one shot on goal through the game’s first 25 minutes. He got it from his center back.

The Colony junior Megan Gilchrist rushed to the front of the net and put home a rebound on a scramble situation to cut the North lead to 2-1 with 8:17 left in the first half. A corner kick by sophomore forward Olivia Howard set up the goal.

“That goal was huge for us,” Ray said. “We did not play well the first 25 minutes. We only had one shot through the first 25 minutes, which is not how we typically play. But, Megan is a battler, and she also saved a goal. She is the backbone of our team. She does all of the dirty work to help us out. That’s what she has done for us the last three years.”

Another set piece set up the tying goal.

Howard booted a corner kick with 22 minutes left in the second half, and that led to a full-out pursuit of the ball.

North initially kicked the ball away from the net, but shortly after The Colony gained possession, sophomore Kristen Sueltz drove home a shot into the left side of the net to level the score at 2-2.

“I always enjoy playing Lovell’s teams because it’s always a test,” Ray said. “We came out on top the first game. This game, we came back to win. It makes me very proud, especially this late in the season, because you have to know that your team can come back.”

The remainder of regulation was placed at a frenetic pace, with both teams generating several quality looks at the goal. Purser came close to completing a hat track. She struck the ball from long distance, but the shot sailed just over the crossbar.

The match was decided a shootout, where the Lady Cougars outlasted the Lady Bulldogs. Per District 10-5A bylaws, the winner of a shootout is awarded two points towards the standings.

The Colony closes out the regular season March 19 against Denison, before the playoffs start March 25. And, the Lady Cougars will enter the postseason as a sophomore-heavy squad.

“It’s insane to think that we’re only 15 and 16 years old and battling 18-year-olds from big schools,” Tischler said. “I don’t have any other words to describe it.”

As for McKinney North, the Lady Bulldogs will enter the playoffs full of confidence. North had won five straight matches before losing Friday – an impressive streak that comes after the Lady Bulldogs struggled through the first half of district play, which included three straight losses to Lovejoy, The Colony and Wylie East.

“We had a really rough beginning of district play,” Lovell said. “We had three games that were not really us, and then we had a breakout and then we lost three in a row. Mentally, it was very taxing on the team. The last six games have been such a huge turnaround, such a difference in play and their approach and mentality towards the game.”