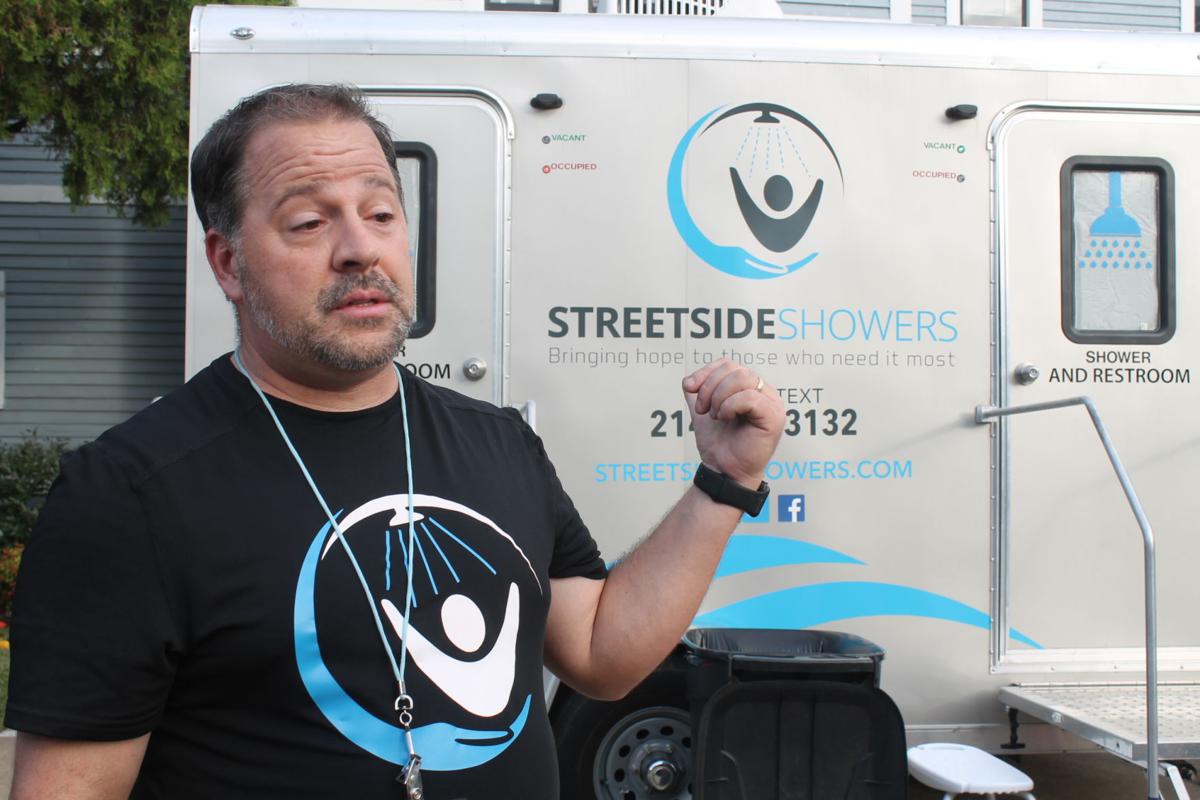 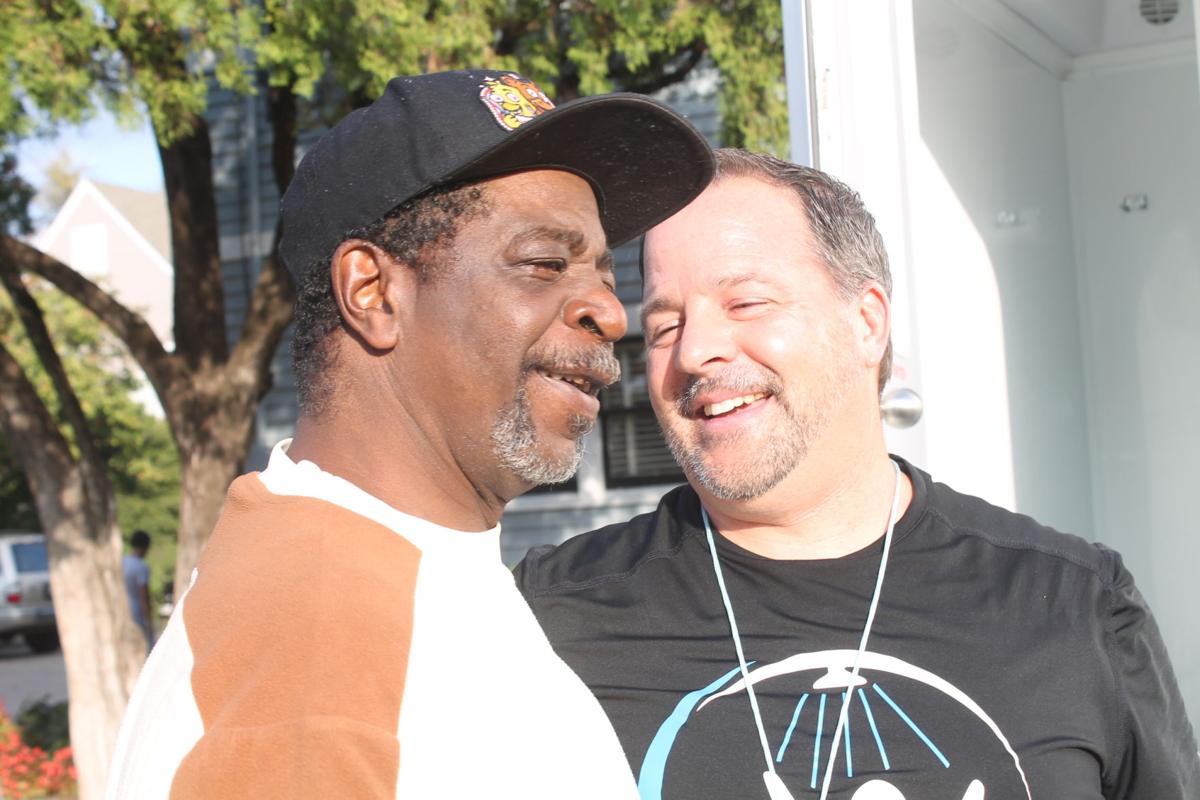 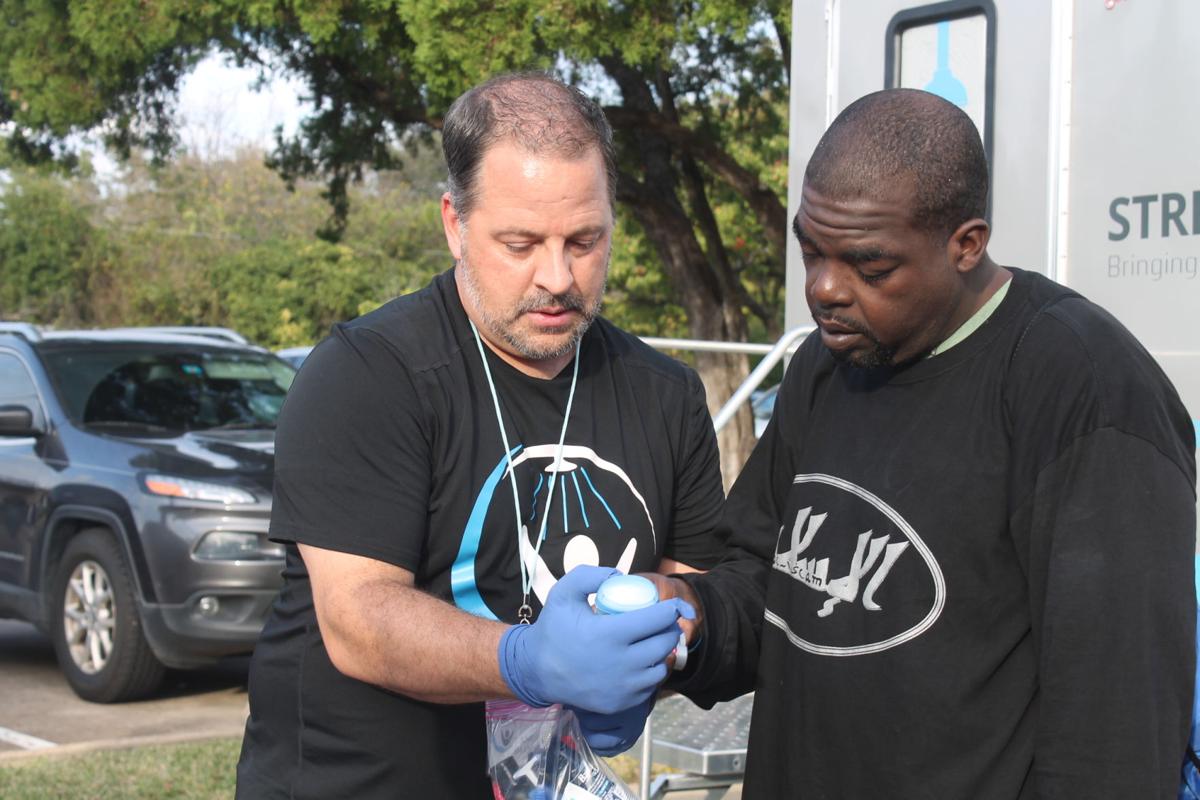 Lance Olinski hands Ageim Brown some toiletries after his shower at City House. 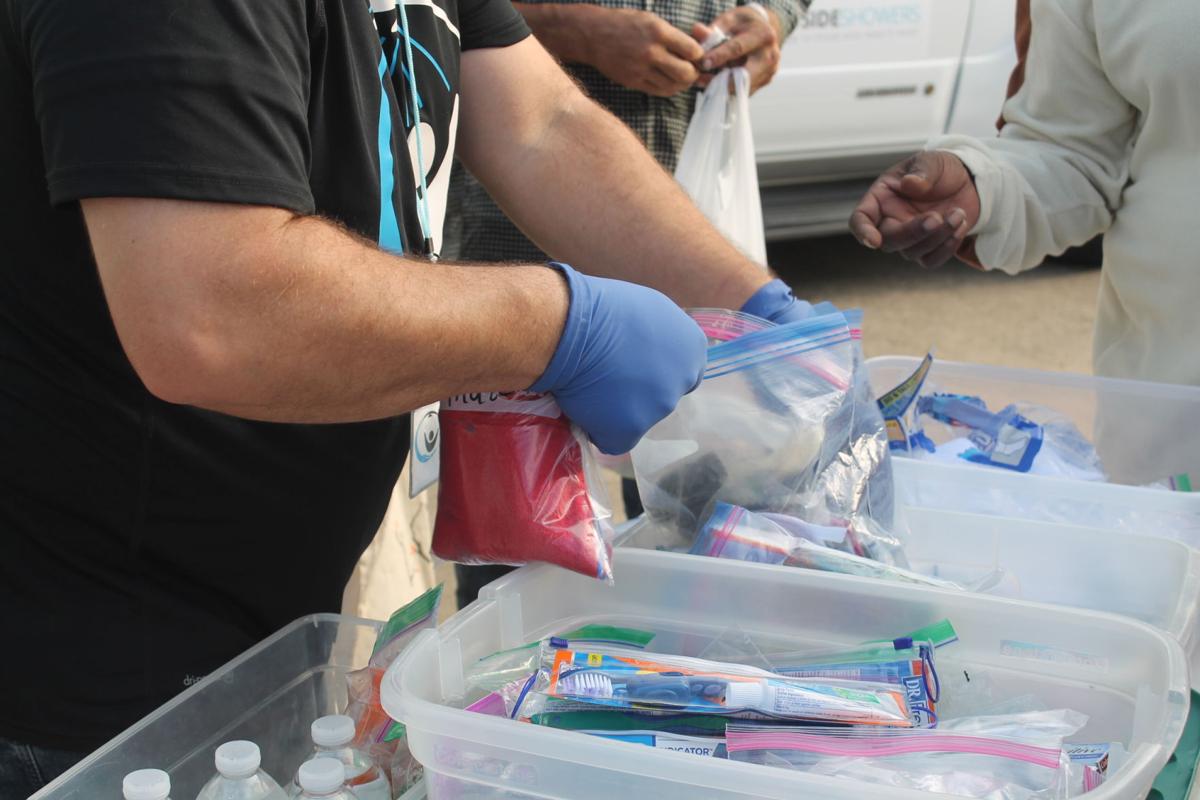 Stanford Robinson and Lance Olinski laugh together after Robinson's shower.

Lance Olinski hands Ageim Brown some toiletries after his shower at City House.

Life for Stanford Robinson is often unexpected. He rarely knows where his next meal will come from, his next job, even the next place he’ll lay his head. But in all that ambiguity, he knows on Tuesdays at City House, he can get a hot shower.

“If you’re out here on the street, it’s not every day you get to take a shower. Taking a shower – a nice, good shower – is just like stepping into a brand new car,” Robinson said.

Robinson and his friends, Todd Allan and Ageim Brown, were able to get a hot shower and a new attitude at the Streetside Shower courtesy of Lance Olinski of McKinney. Each week, Olinski stages his mobile showers in Plano and McKinney to serve homeless people across the community and offer a chance to get clean.

Olinski said he was first inspired to start Streetside Showers when he interacted with a homeless man at a gas station restroom in his hometown of McKinney.

“There was a homeless gentleman in there and he was washing himself in the sink. He was just so desperate. And my heart just sank, and I really felt like we can do something better,” he said.

Soon after, he connected with the Collin County Homeless Coalition, which told him one of the biggest needs among the homeless was hygiene. Collin County doesn’t have many emergency shelters. Organizations like City House, Samaritan Inn and Shiloh Place offer transitional housing into permanent residency, “but for our street people that are living in tents everyday, they don’t have anywhere to get clean,” he said.

Armed with this new information, he started researching mobile showers. The price tag was $22,000, so he put out a call to donors and private supporters.

“I just started sharing the vision, and people bought into it,” he said. And thanks to church members and community supporters, he started Streetside Showers eight months later.

“It’s a full-restroom shower and it’s completely mobile,” he said, complete with hot water, heaters, air conditioning and a bucket for clothing. Though the buckets are a small addition, they point to a vital component of the Streetside Shower brand: dignity.

“To be clean again makes you feel like you’re human. And I think the bottom line of what we’re doing is we’re trying to restore some dignity,” Olinski said. “And if you have some dignity, it gives you some hope for the next day.”

For many people like Robinson, the Streetside Showers are the only chance at a shower all week. And despite their trials and their woes, when they’re in that shower, all those stresses melt away, if only for a while.

“When you’re out here like this, the things that are important to you are the things most people take for granted,” Robinson said. “So, a cooked meal, a nice hot shower, that’s a luxury. For us, it’s a luxury.”

Right now, he and his friends are staying wherever they can, but every Tuesday from 3-5 p.m., they’ll probably be at City House.

“I know at least once a week, I get a chance to take a shower,” he said.

“I want it to be nice. I want it to be clean. It’s not just ‘hurry, get in and get out,’” Olinski said. “Enjoy it. I want them to have an experience because they’re our friends and neighbors.”

Olinski currently stages the showers in McKinney, City House, and he’s working to make an arrangement with the Dallas Public Library. So much of his business is rooted in word-of-mouth, trust and collaboration with other community organizations, so he’s always working to spread the word. As the Streetside Shower schedule expands, Olinski said he hopes to spread more dignity and more showers to people in need.

“I’ve been very blessed in what I have and what I’ve got, and I love being able to meet a need. And when they come out and they say, ‘Thank you,’ that makes my day,” he said.

For information or to find out how to help, visit streetsideshowers.com.