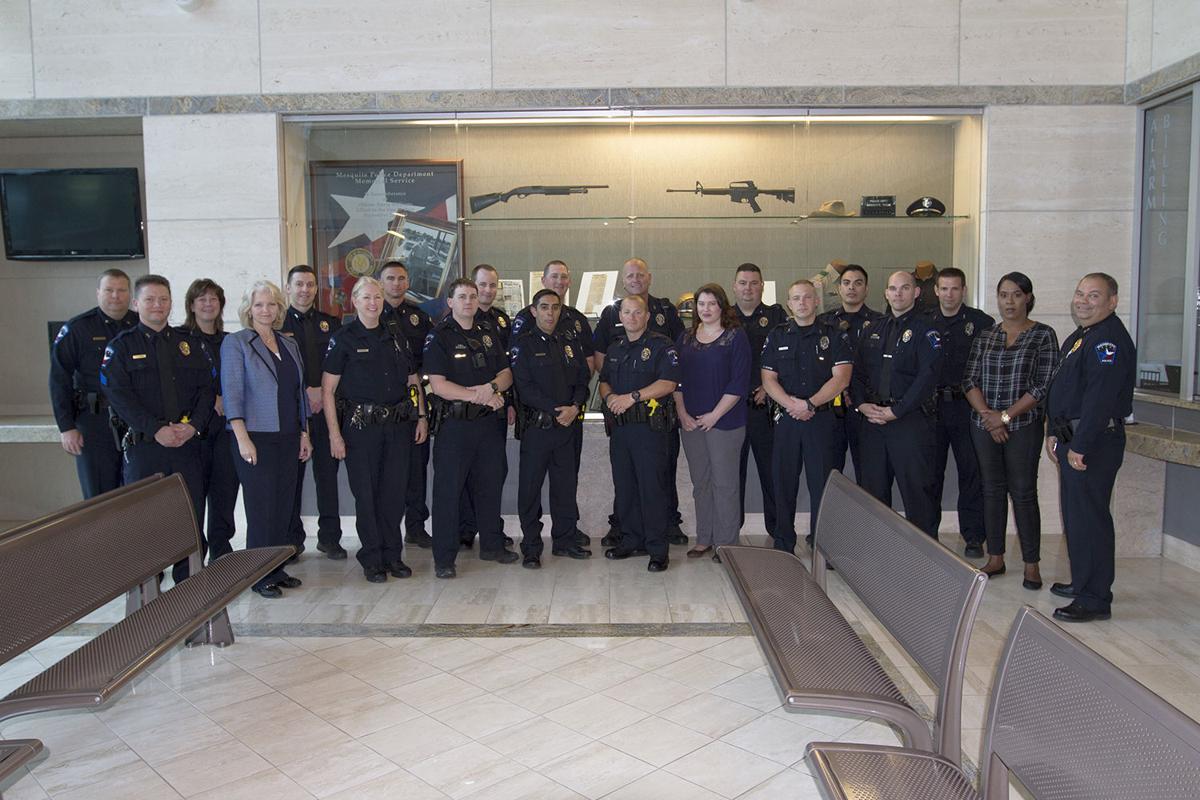 The Mesquite Police Department award winners gather in the lobby of the police station. The department presented 28 awards during the Mesquite City Council meeting Monday. 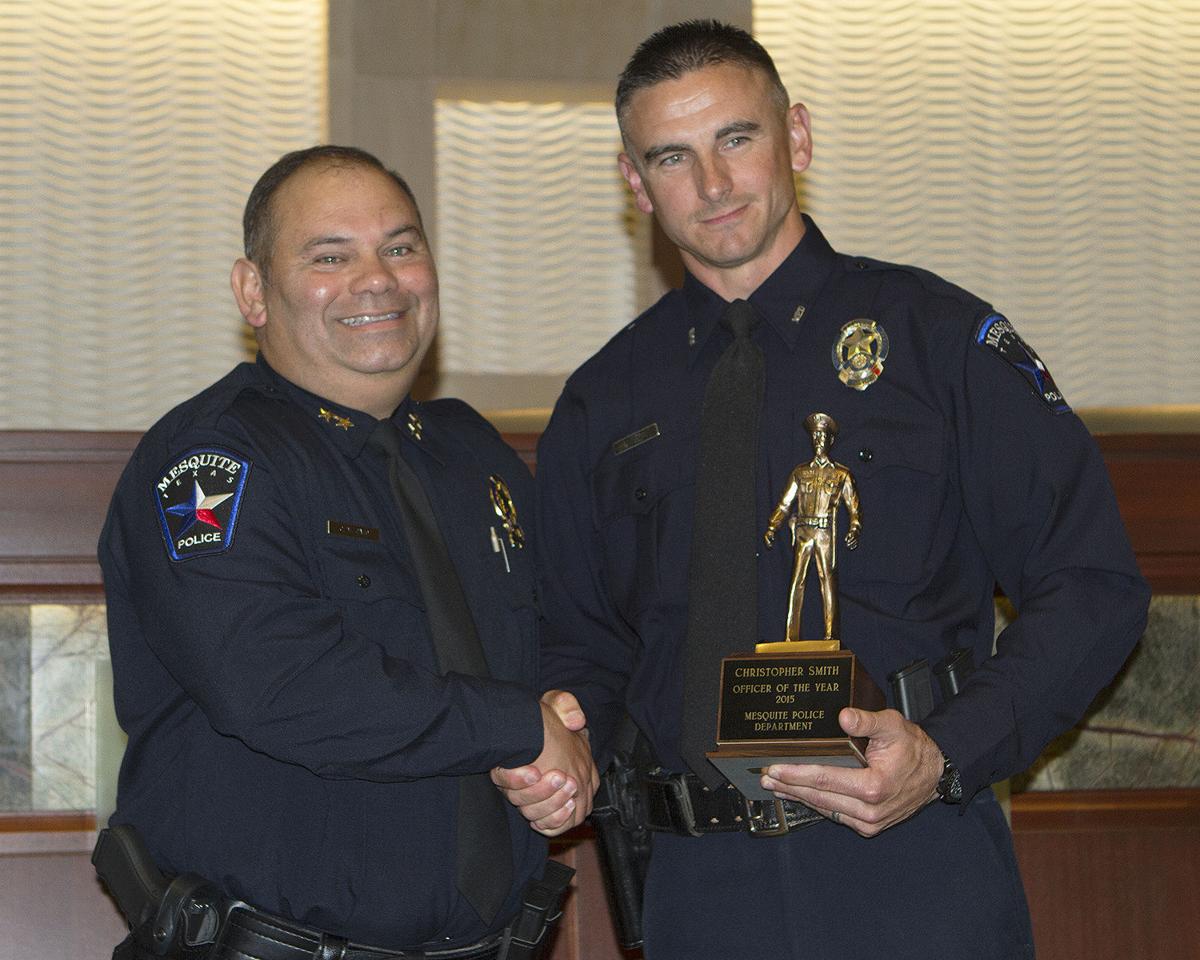 Mesquite Police Chief Charles Cato congratulates Chris Smith for being named Officer of the Year on Monday during the Mesquite City Council meeting. 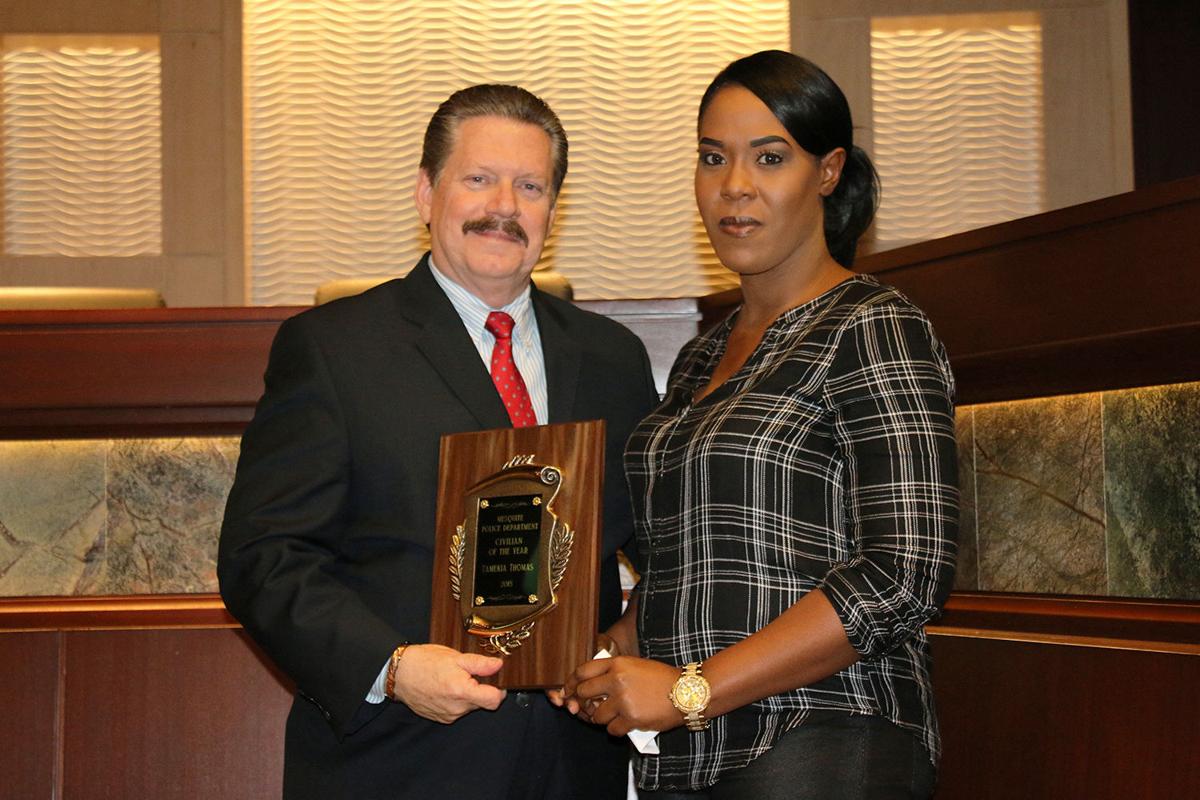 The Mesquite Police Department award winners gather in the lobby of the police station. The department presented 28 awards during the Mesquite City Council meeting Monday.

Mesquite Police Chief Charles Cato congratulates Chris Smith for being named Officer of the Year on Monday during the Mesquite City Council meeting.

The Mesquite City Council helped honor some of the police department’s best on Monday.

The council joined police leadership in presenting awards to uniformed and non-uniformed personnel.

Chris Smith was named Officer of the Year. Smith began his career with the Mesquite Police Department in 2005 as a patrol officer, as which he spent the first eight years of his career.

“He quickly gained a reputation as an officer who handles every call with efficiency and compassion,” said Lt. Brian Parrish, Mesquite PD spokesman.

Smith is a member of IMPACT, a specialized unit of uniformed officers who work to slow crime trends through concentrated efforts. As part of his job with IMPACT, he took the initiative to research possible suspects in a rash of apartment burglaries the team was investigating.

That research resulted in the arrests of several burglary suspects.

Smith also teaches health and nutrition classes and is a physical fitness instructor for the Mesquite Police Academy.

“Chris is an asset to this department and an example of what an officer should be,” Parrish said. “He is professional and extremely patient with citizens. Chris is well-respected by his peers and supervisors. He always has a positive attitude and is a fine representative of the Mesquite Police Department and the city of Mesquite.”

Smith said he was honored to win the award and thanked the employees of the “best police department around” for their efforts to help make the city a safer place.

“I can’t accept this award without thanking all the guys I work with on a daily basis,” he said.

The department named public safety dispatcher Tammy Thomas as its Civilian of the Year. Thomas began her career with the Mesquite Police Department in 2008.

“She has proven to be a hardworking, dedicated and knowledgeable employee,” Parrish noted. “She is extremely focused on the job at hand. During any down time, she is continuously searching for knowledge that may assist her in being a better dispatcher.”

He added that Thomas routinely searches for suspects on prior calls and scans video footage for suspect vehicles.

“Investigators have commented about her diligence in finding good information or leads,” Parrish said.

Thomas thanked her “family” of dispatchers for supporting her and helping her do her job.

“Without their support, I probably wouldn’t be the dispatcher I am today. Getting this award is something I am going to remember the rest of my life,” she said.

In addition to the department’s award, Thomas was recently recognized by her fellow dispatchers as their selection for Dispatcher of the Year.

Sgt. Tim Green received a Certificate of Civic Achievement for his efforts in helping an agency in another part of the state close a case that was more than 28 years old.

In September 2014, Green was at home watching the online Texas Fishing Forum website. A fisherman had posted several photos demonstrating the abilities of his new fish finder. Green noticed what appeared to be a car under water in one of the photos.

Using GPS coordinates, he found that the location of the vehicle was in the southeastern corner of Lake O’ the Pines. Green then contacted the local sheriff’s department and advised deputies what he had found. A few days later, he received a phone call from the area game warden, who informed him they located the vehicle.

“When they recovered the car, they found it belonged to a 50-year-old woman who was reported missing on March 16, 1987, and her remains were in the car. Thanks to Sgt. Green, local officials were able to solve a 27-year-old missing person case and give her family closure,” Parrish said.

Officer of the Year

Civilian of the Year

“Chris is an asset to this department and an example of what an officer should be.” -Mesquite PD Lt. Brian Parrish, on Officer of the Year Chris Smith