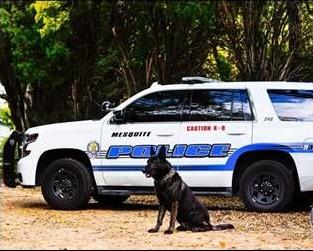 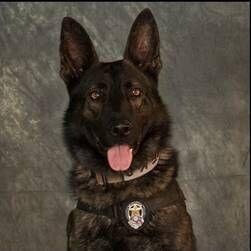 A necropsy conducted on Mesquite Police K-9 Kozmo has revealed trauma consistent with an assault, therefore probable cause has been obtained to charge one of the aggravated robbery suspects in Kozmo’s death.

The suspect, a 16-year-old male, is being charged with interference with a police service animal (causing injury or death), which is a second-degree felony.

According to Mesquite police, Kozmo was found dead early Monday morning after police had chased multiple aggravated robbery suspects into a wooded area.

Around 2:39 a.m. Mesquite police were called to assist the Balch Springs Police Department in pursuing the robbery suspects, according to police. Spike strips were deployed to disable the suspect vehicle near the intersection of Bruton Road and Interstate 635, but the suspects fled on foot into a wooded area near the highway.

Police said Kozmo was used to help track the suspects, who were eventually caught. But police could not find Kozmo until approximately 4:13 a.m. when officers discovered the K-9 was deceased.

“It should be noted that our K9s are members of the MPD family,” the police department stated in a press release. “Kozmo was an amazing and loyal dog who gave his life in the performance of his duties. We ask everyone to keep all of our officers in their thoughts and prayers as we deal with this loss.”

A memorial service will be planned for K-9 Kozmo and those details will be released as they become available.